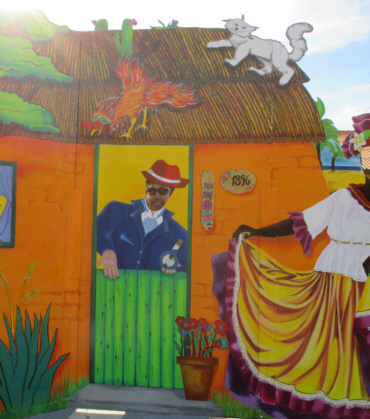 Day 5 found us heading for our third country since leaving Fort Lauderdale. I just love cruising! We were headed to the island of Curacao. I had never heard of this Dutch island before booking the cruise. It is located just a few miles off the coast of Venezuela. We were not scheduled to dock until the afternoon. Therefore, Traci and I slept in and made it to the dining room just before breakfast ended.

From our cabin balcony, I could see the island in the distance. Being so close to a major oil export like Venezuela, I noticed many oil tankers and cargo ships as we got closer to our destination. I sat there on our deck enjoying the warm weather and anticipating the joy of setting foot in another country. And then, "The Chimney" lit up another smelly cigar which ruined my peaceful balcony time.

Our ship docked in the capital city of Willemstad. One of the first things I noticed was all the bright, colorful buildings with burnt-orange colored roofs. We booked the Discover Curacao Island Tour. We had a terrific guide for this 3.5-hour shore excursion. She was personable, knowledgeable, and downright fun. She speaks four languages; however, she only needed to speak English on our tour. Many of the inhabitants of Curacao can speak three languages: Dutch, English, and Spanish. This is so impressive to me. 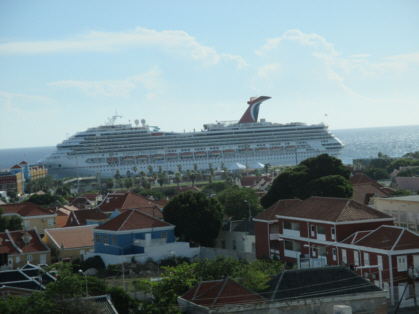 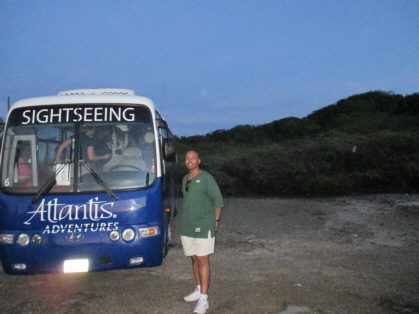 Our guide gave us some facts and stats about the island as our bus driver made her way through the 2-laned downtown streets. The city had a laid back vibe. As we were leaving the capital, we got caught on very tall bridge due to road work; however, this gave us an opportunity to gaze out over the city against the ocean background.

Once out of downtown, the scenery took on more of a suburban look with residential communities, shopping centers, and familiar fast food chains. Our first stop was at the Chobolobo Curacao Liqueur factory. The Spaniards who arrived on the island in 1499 had hoped to produce orange groves but they found out the climate was not conducive for growing quality oranges. Therefore, they abandoned the project and left the plants to grow wild. It was not until much later that someone figured out how to use the orange peels to produce liqueur and perfume. Despite being made from orange peels, the island's most famous liqueur is blue.

Our guide gave us a 5-minute tour of the old factory that was built in the early 1800's. There was not much to see other than some old equipment. She spritzed everyone with the citricy perfume made from orange peels and then led us to the gift shop where we were able to sample four interesting liqueur flavors: orange, rum raisin, chocolate, and hmm - I forgot the last one. I'm not a drinker but I took a sip of each and enjoyed the flavors.

We were driven past the newly expanded airport and on to our next stop: Hato Caves. These caves are different from other caves Traci and I have toured in that they are above ground. We had to climb steps to get to them. We were there on a mild November day but the interior was a little humid. I can only imagine how stuffy it must be in the heat of summer.

A cave guide walked us through the caves while pointing out interesting rock formations and pools of water. As with other cave tours we've done, some of the rock formations resemble familiar objects or people. When we got to the rocks that resembled the biblical characters of Moses and Mary, almost on cue some small bats began flying around overhead. A lady in our group asked "What was that?" 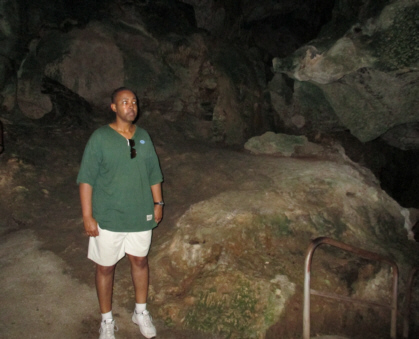 Back on the bus, our sweet tour guide gave us all types of tidbits about the island and then suddenly - she screamed and began fanning herself while letting out a few four-letter words. We were all wondering what happened. She assured us she was okay. It took a minute or so for her to regain her composure and tell us what caused such a reaction. She told us she is afraid of crabs! From the way she reacted, I thought maybe she saw one on the bus. But no, she and a few people near the front saw one walking in the street as we were riding by. She laughed about the situation and told us she also cannot bear to look at centipedes or bats. I'm with her on the bats thing. She told us that this was why she waited outside the cave for us.

Although we had pleasant weather in November, visiting the island at this time of the year has the disadvantage of shorter daylight hours. It was getting dark while our guide was trying to point out interesting sights.

Our final stop before heading back downtown was the Curacao Museum. Inside this dimly-lit museum was old furniture and paintings. One of the more interesting pieces was an old musical instrument called a carillon. This peculiar instrument was shaped like an organ with long pegs. However, each 'peg' rings a bell. I was surprised that our guide allowed me to try to play something on this exhibit. 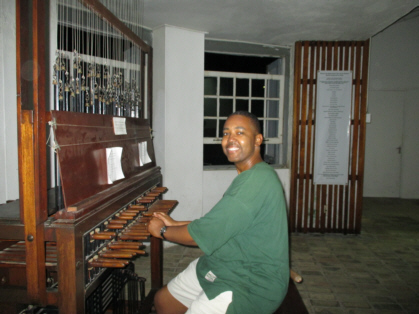 It took less than 20 minutes to see the museum. Before heading back to the bus, we walked next door to have a peek at the first plane to be flown across the Atlantic Ocean. Only the front of the plane was on display. The pilot seats had been replaced with lawn chairs.

Our tour ended in downtown Willemstad around 6 PM. Our guide hugged each of us as we exited the bus. It was a fun outing. 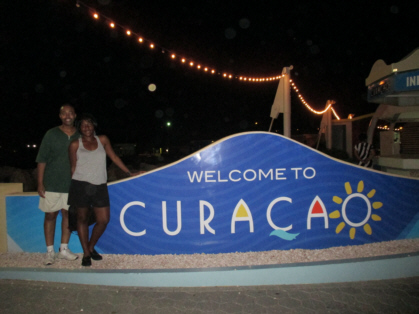 We did not need to be back on the ship until 10:30 PM. Traci and I walked to the nearby Starbucks that our guide pointed out during our tour. We are not coffee drinkers but the draw here is free Wi-Fi. Wi-Fi is very expensive at sea. Many mobile devices cannot get a signal at sea either; therefore, port businesses that offer free Wi-Fi are very popular with cruisers who need or want to stay connected while on vacation.

The Starbucks was crowded with people of many different ethnicities. Finding a seat was a challenge but Traci and I happened to enter just as a couple was leaving. We had a seat and quickly checked email and Facebook.

We left the Starbucks and walked over to the Renaissance Hotel. I was curious about this place because earlier in the day, I thought I heard our tour guide say that there is a beach on the second floor. Thinking she meant an indoor beach, I just had to see this. The Renaissance looks like a nice hotel; however, the cigarette smell from the first floor casino smacked us in the face when we entered and then seemed to follow us wherever we went in the hotel. We made our way to the second floor and walked around until we found a door leading to the pool area. Just beyond the pool was a small beach. No it was not an indoor beach as I had presumed but it was a beach nonetheless.

Traci and I went back to the ship to get cleaned up for dinner. It was Red Haute & Cool Night. In keeping with the theme, Traci and I put on our red outfits and set off to dinner. It was after 8 PM. We had obviously missed our 6 PM dining room seating; therefore, we decided to try one of the other dining rooms on the ship. We arrived at Restaurant Chic but were greeted by a sign indicating a "private event" was in session. Just as we turned to walk away, a host invited us in and seated us. Looking around, it became apparent that this dining room had been reserved for the performers. We saw Najee, Phil Perry, Rahsaan Patterson and many others. 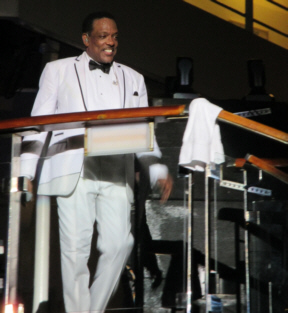 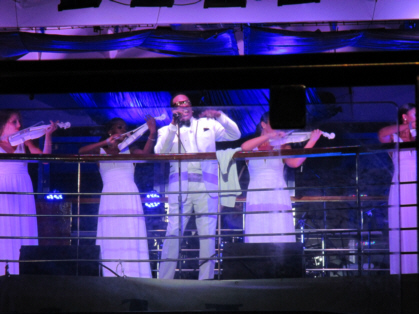 Because it was a late port day, there was only one concert and what a concert it was. Charlie Wilson rocked a crowded pool deck for two hours. He changed clothes several times during the performance. It was a great night for an outdoor show. We even saw a shooting star at one point that made many of us gasp and ask others around us, "Whoa! Did you see that?" Continue...