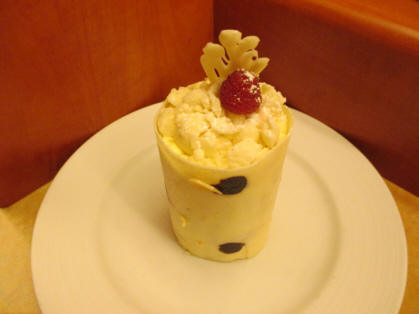 Monday was a sea day or as Carnival calls it a "Fun Day at Sea". Despite having a late night, I was able to join Traci in the dining room for breakfast by 9 AM. For breakfast and lunch in the dining room, the hosts/hostesses seat you with other guests unless you request a private table. Traci and I always enjoyed meeting our fellow guests at meal times.

Many activities are offered on a sea day. In addition to the ship amenities such as pools, casino, spa, shopping, lounges, etc., Capital Jazz sponsored seminars, artist interviews, workshops, fitness classes, dance classes, DJs, card tournaments, and more. With so many things happening on this sea day, Traci and I agreed on our meetup place and time and then went our separate ways to participate in the activities that suit our tastes. Traci went to the fitness center to get her workout on. I went to check out Gerald Veasley's Bass Boot Camp class. That's one of the great things about the Capital Jazz SuperCruise. Musicians get a chance to learn from the pros. In the pre-cruise documentation that Capital Jazz sent, they encouraged bass players to bring their bass onboard to take part in this series of classes. I am not a bass player but have been playing piano for most of my life. I play bass lines on the piano or keyboard all the time. I was looking forward to attending Gerald Veasley's class. He is a patient and enthusiastic teacher. He worked with everyone from beginners to experienced musicians.

I met Traci in the Victoriana for the concert of gospel singer Pastor Marvin Sapp. We've seen him perform several times over the years. He is one of Traci's favorite musicians. He always delivers a high-energy and moving concert. By the time he finished tearing down the house, people were on their feet cheering. Some people were in tears. It was one of the best concerts on the ship. 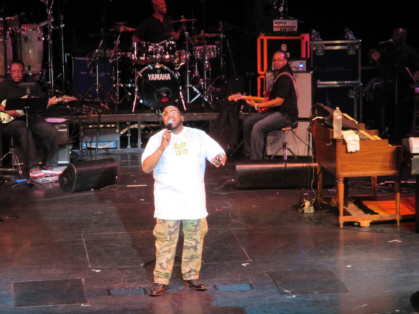 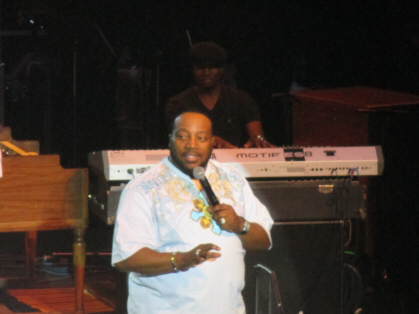 After the concert, Traci and I parted ways again agreeing to meet back at the cabin before dinner. The theme for the day was Greek letter fraternities and sororities. Traci wore her Delta Sigma Theta paraphernalia and joined others from her sorority for a group photo.

I relaxed on our cabin balcony for a few minutes. It was so peaceful and beautiful until "The Chimney" decided to light up a smelly cigar on his/her balcony. That ended my few moments of tranquility. I was sure the documentation indicated that the Capital Jazz cruise is a non-smoking cruise.

I wandered the ship spending time on the pool deck and in other areas. I happened to walk by the Victoriana while R&B singer Chrisette Michele was rehearsing with the band in preparation for her evening concert. Since many of the artists do not bring their touring band on the ship, Capital Jazz provides a 'house band'. These extremely talented musicians have the task of learning the 2-hour shows of just about every artist performing on the ship that week - accents, breakdowns, and all. The amount of music these guys performed was impressive. I stood in the back of the auditorium while Chrisette ran through some of the music with them. It was one of the most efficient rehearsals I have ever witnessed.

I did not spend much time at the rehearsal. I went off to try my luck at Name That Tune. The genres were R&B and smooth jazz. Even though I know a lot of music in these genres, this was one of the hardest Name That Tune games I have ever played. The host knew how to choose one-hit wonders and songs such as "Tom's Diner". Just about everyone knew the distinctive hook but very few knew the title or artist.

Before long, it was time to meet Traci back at the cabin to begin our evening ritual of dinner and concerts. We attended the concert of pianist Bobby Lyle in the Aft Lounge and then went to the Victoriana to see Chrisette Michele and Take 6. Take 6 was one of my favorite performances.

Traci and I still had energy after the shows so we went upstairs to the Freedom Lido Restaurant for some pizza, fries, and other goodies. The food was getting better each day. We frequented the pizza station throughout the week. Of course, I had to have a glass of that wonderfully tart lemonade to go with my food.

To finish off the evening, I took advantage of the fact that I still was not sleepy. I went to the laundry room at 2 AM to iron the rest of the clothes I intended to wear during our time on the cruise. For once, there was no line to use the iron. Continue...