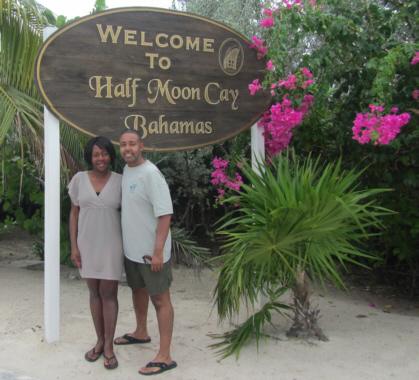 Sunday was our first port of call: Half Moon Cay. Half Moon Cay is Carnival's private island in the Bahamas. We were tendered ashore for a beach party that included music, contests, and barbeque. Traci and I had hoped to do the bicycle tour shore excursion but it was sold out. We stopped by the souvenir shop to buy a refrigerator magnet to add to our collection. We could not believe that as many times as we've been to the Bahamas, we did not have a magnet from there.

The smell of the grills had Traci and me ready to eat. We enjoyed the jerk chicken, hot dogs, hamburgers, desserts, and more while chatting with our fellow passengers. We caught the end of the sexy dance contest before heading down to the beach.

For some unknown reason, my tailbone and left hip had been bothering me for the last two days. The pain seemed to get significantly worse in the afternoons and evenings. Rather than to continue limping around, I decided to relax in a lounge chair on the beach while Traci set off to explore the beach and watch the contests. The weather was perfect. It was an overcast day which meant there was no need to find shade. There was a mild breeze that almost felt like a light massage. Traci eventually pulled up a lounge chair beside me. We were in total vacation mode.

Our plan was to head back to the ship a little early in an effort to avoid waiting in a long line for a tender to return. As we started walking to the pier, the DJ played "The Wobble". Traci cannot pass up an opportunity to do a line dance. She joined others who were wobbling on the beach. This turned out to be the last song before the DJ began packing up his equipment. With no more music playing, everyone headed to the tenders at the same time. This resulted in the long line Traci and I were trying to avoid. Fortunately, the crew was efficient. The line moved more quickly than I expected. We were soon whisked back to the ship. 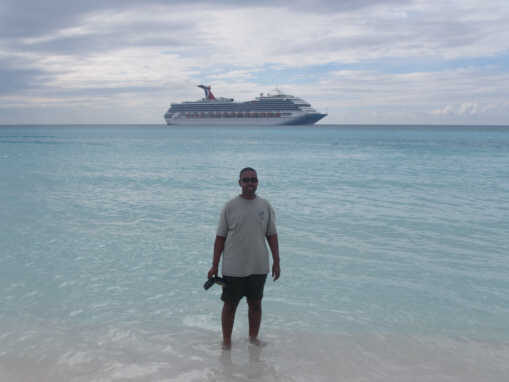 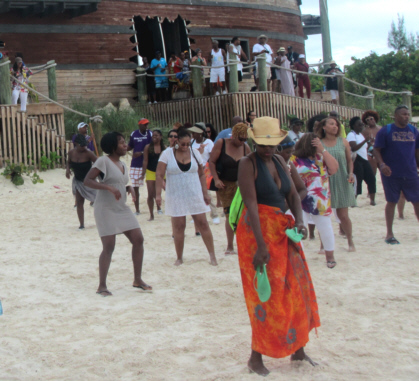 I went up to the pool deck to take part in an American Sunday afternoon ritual - watching football. The Pittsburgh Steelers vs. New England Patriots game was being shown on the Jumbotrons. People were relaxing in lounge chairs while rooting for their team. I was not rooting for either team but I enjoyed hanging out and watching the game with other passengers.

Traci and I got cleaned up and put on our Philadelphia Eagles jerseys to participate in the first party theme night of the week - Football Party. But first I had to deal with the pain in my hip and tailbone. It was starting to make walking an excruciating chore. I went to the ship's reception desk to see if they had Tylenol or any other painkiller. I ended up waiting in line behind none other than hip hop legend Doug E. Fresh! What a surprise! I said hello and then we both searched my copy of the Fun Times publication to see if we could find out the source of that fantastic music we were hearing. The reception desk was located near the Victoriana. The 6 PM concert had begun and whoever was playing had everyone's attention. We found out it was trumpeter Rick Braun. He was blowing stratospheric riffs over a funky groove that had everyone in the reception desk line bobbing their head. 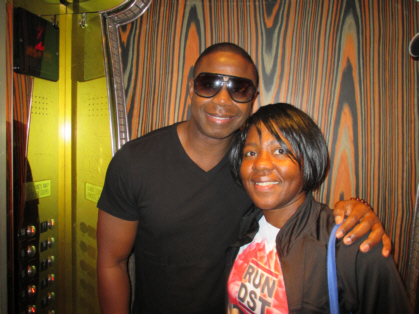 I was able to purchase ibuprophen pills from the reception desk. I was elated when within an hour after taking the pills, my pain was completely gone.

Our tablemates for dinner that evening were trombonist Jeff Bradshaw and his wife. We enjoyed chatting with them about the cruise and life as a full-time musician. This was not a total vacation for Jeff as he would be performing several times during the week. We saw him perform with Joey Sommerville the previous night and again with Anthony Hamilton later in the week.

Since Traci and I did not leave the dining room early enough to get a decent seat for Rahsaan Patterson's concert, we did not even attempt to go to the Aft Lounge to hear the singer. Instead, we wandered the ship. People were hanging out in their football jerseys mingling and having a nice time. Traci and I ran into friends of ours from church. We also said hello to people we met on other cruises we had done over the years such as the Tom Joyner Fantastic Voyage cruises and the One Love Gospel cruises. The funny thing is that I did not remember their names but I remembered where they were from.

Traci and I eventually made it back to our cabin. We would normally flip though the TV channels when we were in the cabin. We had our choice of network, cable, and movie channels. There was a channel on which Capital Jazz staff members provided humorous activity announcements and recaps. However, we seemed to gravitate to the channel on which back-to-back episodes of TV One's Unsung was shown. Some of the artists mentioned in these backstories were performing on the ship. That night, we discovered there was a channel that simulcasted the Aft Lounge concerts. We were able to catch some of Rahsaan Patterson's performance in our room before heading out to the 9:15 PM Rick Braun and Richard Elliot main concert. Rick and Richard were awesome.

Our evening did not end there. We walked down to the Aft Lounge to catch the midnight Underground Lounge show. The Underground Lounge features new artists. On this night, singer Maimouna Youssef performed. I was looking forward to seeing her. I heard her once on the DC jazz radio station one evening on my way home from work. Her song "Gypsy Woman" caught my attention because of its interesting mix of jazz and rock. Fortunately, the radio personality said the name of the song and the artist thus allowing me to download the song when I got home. Fast forward one year and here I am at her concert. She did a nice job.

After Maimouna's concert, Traci went back to the cabin. I somehow still had energy so I went to the Victoriana to catch the end of the jam session. It was a real treat to see top-notched musicians such as Najee, Gerald Veasely, and others trading solos. What a night! I finally dragged myself to bed at 2 AM. Continue...