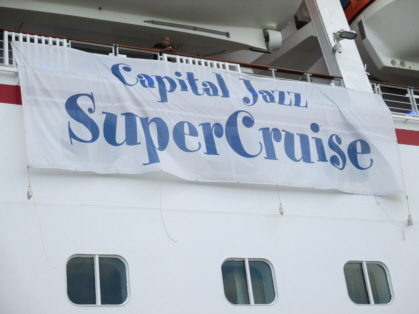 We arrived the night before the cruise and stayed at the SpringHill Suites Fort Lauderdale Airport & Cruise Port hotel. We normally stay at this hotel when we cruise from Florida because of the complimentary cruise port shuttle and the complimentary breakfast buffet. We missed the Capital Jazz Pre-Cruise Mix & Mingle at the host hotel (Hilton Fort Lauderdale Airport) because our flight got in so late.

The next day was cruise day. We had some time between breakfast and our shuttle slot so Traci walked to the shopping center across the street to buy a costume for 80's Night and some bottled water. We've learned that bringing your own bottled water onboard is much cheaper than the bottle the ship provides for your cabin. Just make sure you don't go overboard with this (pun intended). The 24 bottles Traci bought weighed our luggage down to the point that one of our suitcase handles broke. Darn it!

It was a short ride from the hotel to the Fort Lauderdale cruise port. Since there were three ships in port that day, there was a long line of taxis, motorcoaches, and other vehicles waiting to unload passengers. It took almost 30 minutes for our motorcoach to get close enough to the Carnival Freedom terminal to begin unloading us.

It took about 30 minutes for us to go through the maze line, get checked in, and finally board the ship. This was our first time on Carnival's Freedom. It is a large ship with a 2,974-passenger capacity. We had a balcony cabin (#7371) which was plenty of space for us. I liked that I could slide my suitcase under the bed.

As we normally do when we board a cruise ship, we went up to the lunch buffet on the Lido deck. I was looking forward to finally breaking my 2-month diet. I admit I am a little weird in that I restrict my diet to healthy eating between holidays and vacations just so that I can eat guilt-free during the holiday or vacation. In this case, I lost 10 pounds in the 2 months leading up to this cruise. Now it was time to let the pig-fest begin! I loaded up my plates with chicken, fish, fries, and anything else that looked good. Blah! Spit it out! What a disappointment! The chicken was stringy. The fish was dry. The fries seemed like they had been reheated. Traci got different food items but did not fare much better. I was wondering if they had just put out the food from the last cruise in order to get rid of it. I thought this was going to be the first time in ten cruises that I was not going to gain weight.

There were some bright spots during this first meal. Traci enjoyed the cook-to-order dish she got from the Mongolian Wok station. As for me, I loved the tart lemonade. The food got much better throughout the week - so much so that I came home 12 pounds heavier! Fortunately, I was able to lose about half of that within a week of returning to sensible eating. The rest came off over several weeks.

Our luggage was delivered to our cabin some time after the safety drill. I opened my suitcase and found a note from the ship security indicating they had confiscated my travel iron until the end of the cruise. Guests are not allowed to have irons in their cabin because they are fire hazards. This meant I would have to join other guests in the lines in the various laundry rooms on the ship to iron my clothes using the ship-provided irons. 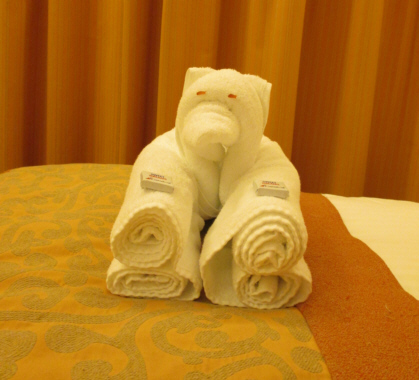 towel art from our cabin attendant

I stood on our balcony for a while watching airplanes land at nearby Fort Lauderdale Airport. The sun was intense but I did not care. I was on vacation heading to Caribbean islands in November. Life was good.

I remained on the balcony as our ship and the other two ships in port slowly drifted away from the pier one at a time. Traci and I began what would become our evening ritual of dinner and concerts. We had dinner in the dining room (no more buffets for us). We had the early seating (6 PM). There are no assigned tables on the Capital Jazz cruise. You can sit anywhere you see an open seat. Traci and I sometimes chose a private table for two but often joined other guests. Everyone was so friendly that we never had to worry about awkward silence at mealtimes.

Our primary reason for coming on the Capital Jazz SuperCruise began after dinner - the concerts! The evening concerts actually began at 6 PM but because Traci and I had early dinner seating at that time, we attended the 2nd show schedule. After dinner we would go to the Aft Lounge for the 7:30 PM show and then go to the other end of the ship for the 9:15 PM main stage concert in the Victoriana Main Show Lounge. On this first evening, we were entertained by a funky jazz performance by trumpeter Joey Sommerville and friends. It was a good show but we encountered the situation that would plague us the rest of the week, and that is that we would have to leave the Aft Lounge concert before it ended in order to get our preferred seat at the main stage concert in the Victoriana. This evening, the smooth jazz group Incognito was performing in the Victoriana. These talented musicians gave a nice show. The young lady who filled in for Maysa on their hit song "Deep Waters" did an outstanding job. However, it was a little unnerving to hear her singing her heart out on the lyrics "I'm drowning in deep waters" while we were on a ship in the Atlantic Ocean.

Traci and I were too sleepy to stay up for the midnight show featuring vocalist Eric Roberson. Therefore, we retired to our cabin for the evening. Continue...