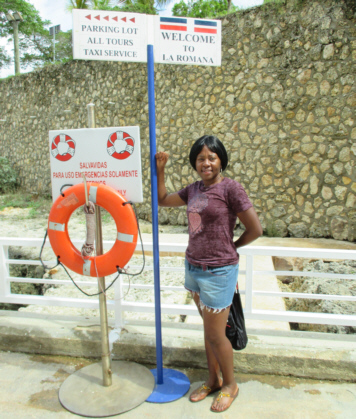 Tuesday was a port day - La Romana, Dominican Republic. Unfortunately, this stop turned out to be one of my worst port of call experiences. By no means was this anything devastating or serious - just frustrating.

Traci and I have been to the Dominican Republic several times but never to La Romana. We were looking forward to learning about the town. We signed up for Carnival's Taino Indian Cave & La Romana shore excursion but it was cancelled because not enough people signed up for it. Instead we decided to see if we could purchase a tour when we got off the ship.

We were reminded we were now in the tropics as soon as we stepped off the ship. Even though it was November, the weather was hot and humid. There is not much in walking distance from the pier other than a souvenir shop. You need to purchase transportation to get to La Romana, Casa de Campo, the beaches, or the Mediterranean-style village of Altos de Chavon. There is an open-sided trolley train that rides on the road (kind of like the parking lot shuttles at amusement parks). This train takes tourists from the pier to La Romana. A friendly employee told us the train provides narration and makes two stops on the way to La Romana. He sent us to the ticket window to purchase the $19/person tickets. By this time, there was a long line of passengers at the window. I stood in line for almost 20 minutes to buy our tickets. We were allowed to use our ship cabin card/key to make the purchase. Now that we had tickets, we had to stand in the long line of guests waiting for the train to return from La Romana. I was told this could take up to 30 minutes. By the length of the line, it was doubtful that we would even be able to catch the next train.

While Traci stood in line, I walked through the pavilion at the pier and saw a sign advertising roundtrip air-conditioned shuttles to La Romana for $5. I asked the young lady at the booth about the differences between this shuttle and the tourist train. I was really curious of why the train was almost 4 times the amount of the shuttle which seemed like the better mode of transportation. After all, the shuttle was air-conditioned whereas the passengers on the train were crammed shoulder-to-shoulder on benches. They got no heat relief unless the train was moving. She told me both vehicles go to the same place but the train is narrated and makes two stops. The lady told me I should have looked around before I purchased the train ticket. I asked her if she knew if there was a refund policy. She chuckled and said something to the effect of 'Good luck with that.'

I found Traci who was still standing in the line that hadn't moved. I told her about the shuttle and that I was going to see if I could get a refund on our train tickets. To my surprise, the people at the train ticket window refunded our tickets with no hassle. This was a good thing because by the time I went to tell Traci the good news, the train had arrived and was letting off passengers returning from La Romana. The returning passengers were advising people not to go. They said the tour was cheesy and that La Romana had nothing but very aggressive vendors that followed them and made them feel uncomfortable. At this point, Traci and I had had enough of this port. We turned around and got back on the ship.

It felt weird to be on the ship while in port. The place was deserted. We ended up going back to the cabin and taking a long, rejuvenating afternoon nap. Afterwards, Traci went to the fitness center for her daily workout. I went upstairs to hang out on the pool deck. Electric violinist Ken Ford was entertaining the crowd with smooth jazz and R&B.

While the dinners were becoming more tasty, the offerings were becoming more interesting. There was a section on the menu called "Didja" which was supposed to be "foods you have always wanted to try, but did not dare". A cruise ship is a great place to be adventurous because you can order as much food as you want at no extra cost. There were a few evenings that in addition to our main entrees we tried items from the Didja section. We tried foods such as alligator fritters (bland), shark (yuck!), and frog legs (tasted like bland chicken with a hint of seafood).

From the Didja Menu 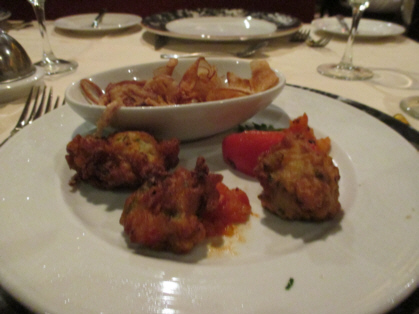 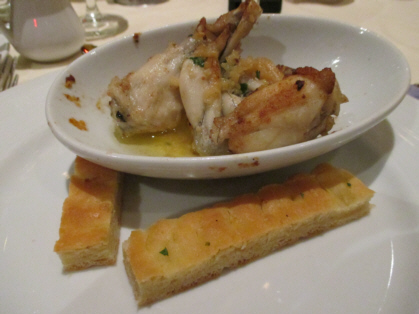 The Aft Lounge concert this evening was my favorite performance of the week. It was the group Jeff Lorber Fusion. Keyboardist Jeff Lorber is a giant in jazz fusion. This was evident by the number of professional musicians in the audience checking out the show. He and his musicians are on another level. I was in awe of the whole show.

Traci and I moved on to our next concert of the evening which featured Stephanie Mills and Larry Graham & Graham Central Station. Stephanie Mills' earlier concert turned out to be the most talked about performance of the week - not because of the show quality but because of some unexpected stage antics. Those who saw Stephanie perform her early show said that she was unhappy about something. She performed part of that show with her back to the audience! Of course, this made for easy comedic material for hosts and comedians during the rest of the cruise. Many of them poked fun at the situation by starting their show with their back to the audience too. 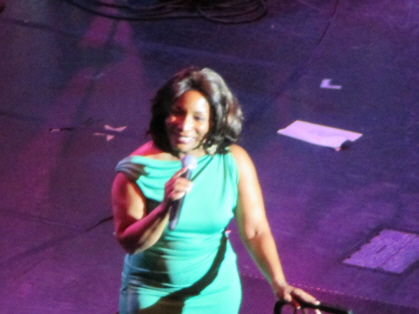 We saw Stephanie Mills during her second show of the evening. The beginning of this performance was a bit odd but nothing like the antics of the first show. One of the things I enjoyed about the Capital Jazz cruise is that when they advertise a concert as starting at 9:15 PM, you could count on the downbeat occurring at 9:15 PM. The host announced Stephanie Mills; the band played the intro but there was no Stephanie. Each of the instrumentalists took turns taking solos in an effort to stretch the music. When there was still no Stephanie, the background vocalists began scatting over the intro music. This went on for a while. At last, Stephanie Mills walked onto the stage to a thunderous applause. She delivered a great show. 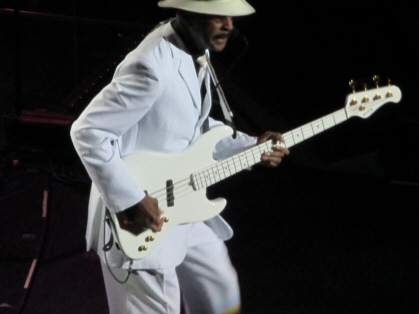 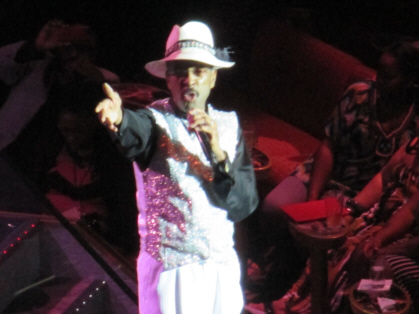 Stephanie Mills' set was followed by a high-energy performance by Larry Graham & Graham Central station. We all enjoyed singing along as Larry sang his classic hits including hits from his Sly & the Family Stone days. Despite our long afternoon nap, Traci and I were worn out at the conclusion of the shows. As much as I wanted to, I just did not have the energy to stay up for the Underground Lounge or the midnight jam session. Traci and I turned in for the night. Continue...