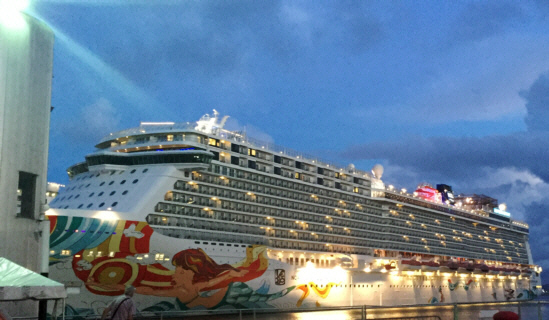 What a disappointment! This was our third Capital Jazz SuperCruise. Unfortunately, the third time was not a charm. Whereas our previous experiences with Capital Jazz had been wonderful, this year was not up to par. With all of the glitches this time around, this cruise did not feel like vacation. However, what saved this cruise from being a total failure were the concerts. If you were lucky and patient enough to see them, they were outstanding.

We were not sure we would even be going on the Capital Jazz Cruise 2016. We did not sign up as soon as the cruise registration opened in 2015. As a result, we ended up being wait-listed. We were contacted in March 2016 to let us know that some cabins had become available. We jumped at the opportunity knowing how much we had enjoyed our previous two cruises with Capital Jazz. In fact, to make sure we would not be wait-listed again, we signed up for the 2017 Capital Jazz Cruise as soon as it was announced a few months later.

Excitement was building in the months leading up to the cruise. Capital Jazz would be celebrating the 10th anniversary of its annual cruise. We just knew it was going to be spectacular. We enjoyed receiving newsletters via email announcing things such as the artists that were booked for the cruise and the various activities that would take place onboard.

Capital Jazz used Carnival Cruise lines the last two times we cruised with them; however, this time they changed to Norwegian. The ship this time would be the Norwegian Getaway. It was a bigger ship than the previous ones. It had a passenger capacity of 3,969. It had many venues for performances, many restaurants, and a bunch of amenities. I had a nagging question in the back of my mind about the venue sizes on the ship. Would they be able to accommodate all of the passengers? I did not worry about it too much. I was confident that Capital Jazz had figured this out. After all, they had never let us down before.

A few weeks before the cruise, we received a performance schedule and a note indicating we would have to make reservations for concerts this year. This was different from past years in which your concert schedule was mainly dictated by your dinner seating and thus there was no need to make any reservations. For the 2016 cruise, we were informed that not only did we need reservations but they could not be made until we were aboard the ship. We were told they could be booked using a kiosk, the ship box office, the Norwegian onboard mobile app, or TV in your cabin - and so began the major disappointments but more about those later.

Capital Jazz Cruise 2016 left from Miami and made stops in the Bahamas, Puerto Rico, and St. Kitts. As usual, Traci and I flew in the night before the cruise embarkation and stayed at an airport hotel. We used our points for a free stay at the Miami Airport Marriott. We planned to use our normal strategy for getting to the cruise port for free by using the hotel's complimentary airport shuttle to take us to the arrivals section of the airport on embarkation day. From there we would take the complimentary shuttle provided by Capital Jazz to the ship. As we headed out of the hotel on embarkation day to look for the airport shuttle, I saw a motorcoach that looked like it was loading up with cruise passengers. I asked the bus driver if he was with Capital Jazz. He said yes and invited us onboard. What a surprise! I had no idea that Capital Jazz was providing transportation to the port from the Miami Airport Marriott Hotel. As we stepped onto the bus and greeted the other passengers, I began to realize that we were on the artist bus! I saw artists such as Howard Hewett, Jeff Lorber, James Lloyd, and others. Traci and I found seats and hoped we were not taking the seat of people who were SUPPOSED to be on the bus. We started getting nervous when the bus stopped at another hotel to pick up some of the band members but alas we were relieved when we saw there was plenty of room on the bus for everyone.

There were several ships in port that day which meant the terminals were mobbed with people. The check-in lines were very long. Having arrived on the artist bus, Traci and I were led to the short line! But wouldn’t you know it? As soon as we were next in the security line, one of the staff asked if we were artists. When we said no, she told us we were not supposed to be in that line but then decided to let us through anyway. Whew!

Traci and I brought our own luggage onboard instead of leaving it with the porters to deliver later in the evening. The porters tried to keep us from carrying our own luggage. Some told us that we were not allowed to carry our own. Others told us our suitcases would not fit through the scanners. We've heard all this before. Traci and I have cruised enough (cruise #15 for us) to know that the porters who told us this were not telling the truth. The only trouble we encountered when boarding was that the complimentary hotel sodas and water we brought with us were confiscated because Norwegian does not allow you to bring any beverages aboard. I knew this was the case for alcoholic beverages but we were surprised that soft drinks were not allowed. Security told us that this rule went into effect in July 2016. Nonetheless, it was not long after that that we were boarding the Norwegian Getaway! Continue...