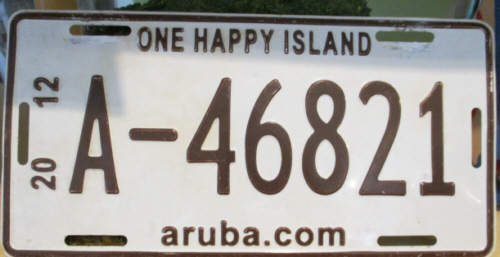 We awoke Thursday morning already docked in Aruba, a Dutch island also off the coast of Venezuela. Traci had visited Aruba many years ago but this was my first time visiting the island.

We had breakfast in the dining room at 7:30 AM so that we could be off the ship in time for our 8:30 Best of Aruba Island Tour. The tour lasted three and a half hours. Our driver pointed out some casinos and shopping districts as we made our way through the capital city of Oranjestad. Colorful storefronts lined the busy two-laned street. Our motorcoach continued out to the countryside and up to the North Coast. There was nothing on this tour that I would describe as a must-see. We made photo stops at overlooks, a set of boulders, a natural bridge, a quaint chapel, and even a graffiti-riddled set of water towers (for another elevated view of the island). I was surprised by the desert-like scenery of the island's interior. We saw many cacti. This was the hottest weather we experienced during our cruise but it was not as humid as the Dominican Republic. 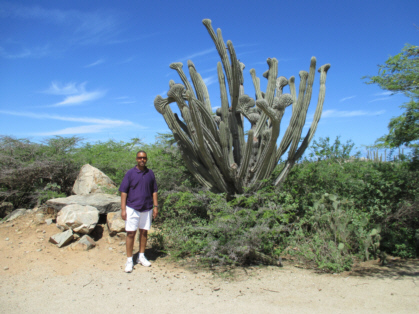 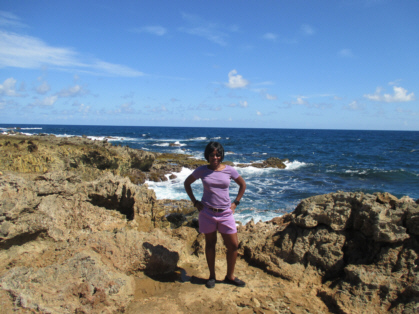 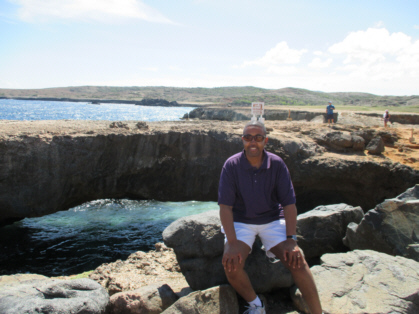 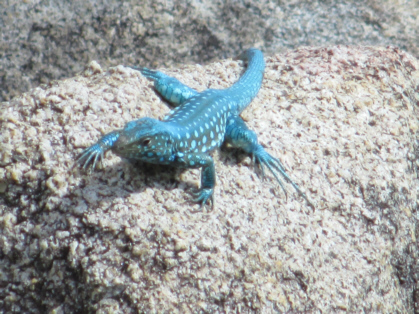 On our way back to Oranjestad, we rode by numerous beachfront resorts. This made me realize that Aruba is probably a great beach vacation destination but not so much a sightseeing destination. At the conclusion of the tour, our driver let us off on a street in downtown Oranjestad. I am not sure why he chose this location because it blocked traffic. The drivers caught in this traffic jam on this "One Happy Island" were sure to show their discontent by laying on their horns.

There were many restaurants and stores in the area where we were dropped off. Traci and I were quite hungry but since our meals on the ship were already paid for, we boarded the ship for lunch and then came off again to explore downtown. Our exploration was over almost as soon as it began when we found a coffee shop with free Wi-Fi. This was not hard to spot due to all the people we recognized from our ship who were at the shop gazing intensely into their mobile devices.

We did not see much more of the city thanks to my paranoia about missing the ship. We needed to be back onboard by 4 PM (ship time). The problem was that Aruba time was an hour ahead of ship time. I knew this but began to second-guess myself when I saw the time on the street clocks. Furthermore, all the people I recognized from our ship who were walking towards the dock did not help my paranoia either.

Back onboard, I finally had a peaceful hour or so on our cabin balcony without "The Chimney". I watched airplanes land at Aruba's airport. The large jets seemed to fly so low during their approach that it looked like they could almost skim the water with their landing gear.

Our ship left the port on-time. I continued to sit on our balcony and watched as the colorful buildings of Oranjestad shrank into the horizon. It felt so tranquil sitting out there but kind of sad as I realized we were leaving our final port of call for this cruise.

The sun was setting. It was time for Traci and me to get ready for dinner and concerts. We attended the Aft Lounge concert of saxophonist Paul Taylor. He was joined by Najee.

The main concert this evening was a comedy show featuring comedians Michael Colyar, Arie Spears, and Bruce Bruce. This was a comedy show filled with offensive jokes and profanity. The host tried to warn the audience by telling us we need to "loosen up". This is not our preferred style of comedy but nonetheless, Traci and I stayed for the whole show. 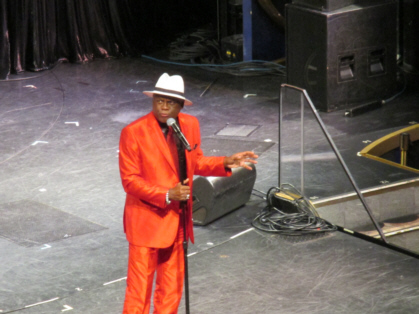 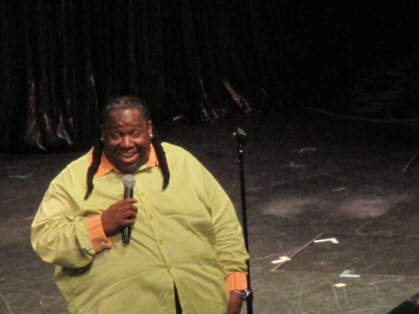 Also happening on the ship that evening was a "Scandal" party. Gladiators (fans of the hit TV show - "Scandal") were gathered on the pool deck to watch this week's episode on the Jumbotrons. Traci loves the show but she did not join the rest of the Gladiators that evening. I guess all the daytime heat of Aruba wore us out. We were so sleepy that we barely made it through the comedy show. Once again, I was not able to stay up for the midnight jam session. Continue...