There were three ports of call this year: Philipsburg, St. Maarten; Charlotte Amalie, St. Thomas; and Coco Cay, Bahamas. Even though Traci and I had been to each of these islands at least once before, we still managed to sign up for different shore excursions from our previous visits. Since we are not really into beaches and water sports, we signed up for tours. 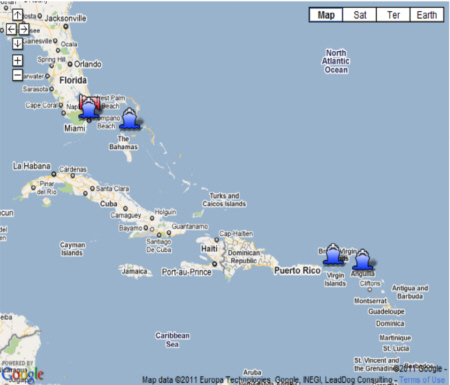 Traci and I did the St. Maarten Island Tour shore excursion. The island is unique in that half of it is a territory of the Netherlands (Sint Maarten) and the other half is a territory of France (Saint Martin). The two and a half-hour tour showed us some of the highlights of both parts of the island.

Our ship was docked in Phillipsburg, the capital of the Dutch side of the island. This is where we boarded our tour van. We spent the first 45 minutes riding through the rural sections of St. Maarten as our driver narrated. He told us the island’s history of how it changed hands several times between the British, Dutch, Spanish, and French until it was peacefully divided between the French and Dutch in 1648. He pointed out celebrity homes and sites such as the Great Salt Pond utilized by the early Dutch colonist via slave labor for the salt industry.

We were driven pass colorful houses, cotton trees, and monuments as our driver continued to provide cultural and historical tidbits. I was surprised to learn that making a phone call between the two sides of the island is an expensive international call. To avoid these fees, residents often own two phones - one issued from the Dutch side and one from the French side.

Upon our arrival in Marigot, the capital of St. Martin (French), we were given an hour to visit the shops, craft markets, and a small shopping mall. Marigot seemed much more laid back than busy Phillipsburg.

Whereas I did not hear any Dutch spoken during our time on the St. Maarten side of the island, I did hear quite a bit of French spoken when we arrived in Marigot. However, all the shopkeepers we encountered were fluent in English as well.

While Traci did some shopping, I took the opportunity to try my first coconut water. I had always wanted to try one when we visited tropical destinations in the past but never did. Here was my chance. Yuck! I did not like it one bit. Despite the taste, I tried to finish it because it was rather expensive. However, I gave up about half-way through. I’m guessing coconut water is an acquired taste. 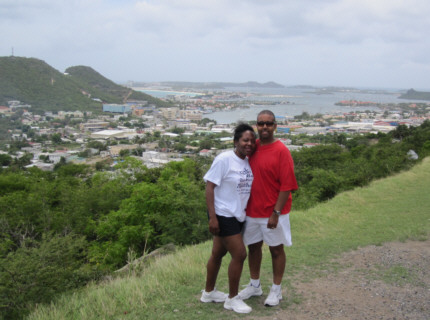 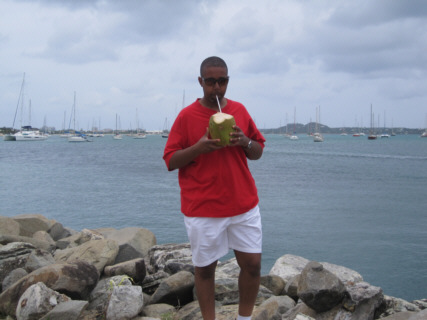 During our ride back to Phillipsburg, we made a brief stop at a scenic overlook. Upon our arrival back in Phillipsburg, our driver gave us a brief description of the layout of the city. The two main streets are Front Street and Back Street. It is in this bustling area where visitors can find many duty-free jewelry shops and restaurants. At this point, the tour was pretty much over. Our driver gave our group the option of being dropped off on Front Street or at the cruise ship pier. Those who chose the former were responsible for their own transportation back to the ship. This distance is walkable. Taxis and shuttles are also available.

The St. Maarten Island Tour shore excursion was a relaxing way to see a large area of the island in a short amount of time. We did a similar tour during a previous cruise. At that time, a group of us negotiated with one of the taxi drivers that line the cruise ship terminal for a tour of the island. That taxi tour followed pretty much the same itinerary as the one offered by Royal Caribbean. Therefore, if you can get a group of passengers together and negotiate with one of the taxi drivers, you might be able to save a few dollars on the tour.

It was early afternoon when the St. Maarten Island Tour ended. Even though we did not have to be back on the ship until 10:30 PM, Traci and I went back to the ship. Our plan was to eat lunch and then get back off the ship to look around some more. I'm not sure where the time went but before I knew it, it was time to eat dinner and get ready for the evening concerts. We never made it off the ship again like we had intended.

Traci and I did not spend anytime on St. Thomas this time around. We had already been treated to a personal tour of St. Thomas during our first cruise visit in 2005, thanks to Traci’s former college roommate who was living there at the time. She and her family have since moved back to the States and thus we were no longer able to hang out with them during this visit to the island. Always in search of a new sightseeing opportunity and an opportunity to add to our refrigerator magnet collection, Traci and I scoured the list of Royal Caribbean shore excursions and signed up for the St. John Island Tour excursion this time. This would be our first visit to the island.

We took a 45-minute boat ride on the choppy sea to the island of St. John. Along the way we enjoyed island music over the PA system. This was occasionally interrupted by a tour guide on the boat who pointed out resorts, homes, and other islands. Upon our arrival at St. John, we were transferred to an open mini bus for our 2-hour tour of the island.

If there was ever a postcard Caribbean island, St. John is it! St. John is home to the Virgin Islands National Park and its beauty is protected. Everywhere we looked was gorgeous - from the lush green forests to the bright blue sea. Our tour consisted of beautiful overlook after beautiful overlook. We were driven on shaded, winding mountain roads while our driver provided some historical and social facts about St. John. He had more of a conversational style as opposed to the non-stop recitation of facts and statistics we’ve experienced on other sightseeing tours. He did a great job. We made brief stops along the way to photograph the scenery. As we climbed higher into the mountains, our driver used the overlook stops to point out other islands in the U.S. Virgin Islands as well as islands in the British Virgin Islands.

We were given about 20 minutes to take a look at picturesque Cinnamon Beach and/or make a purchase at a nearby shop. We were given about 30 minutes at the Bordeaux Mountain View Point to admire the brilliant green valley below and to visit the handful of souvenir shops there.

After the Bordeaux Mountain View Point stop, our driver had to hasten down the mountain roads to get us to the ferry for our return to St. Thomas. By the time we arrived back at the pier at St. Thomas, we only had a few minutes before all passengers needed to be back on the ship. I was really impressed by the St. John Island Tour. I recommend it for those who want to be blown away by beautiful scenery. 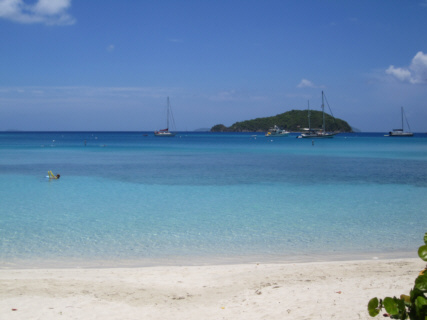 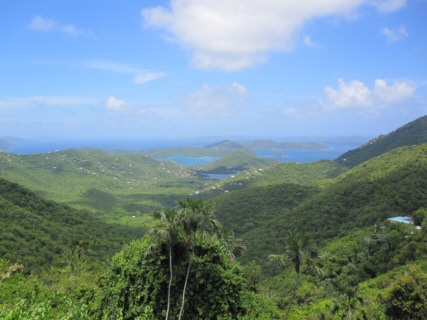 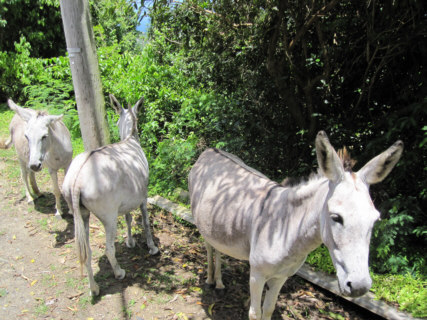 donkeys on the road 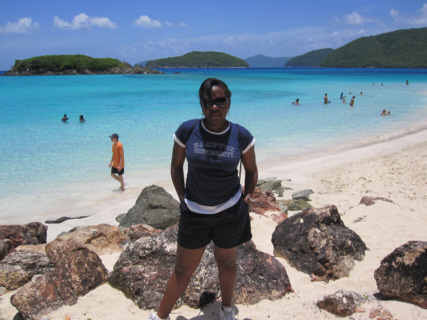 Coco Cay was our final port of call for this cruise. We had to wait in line for almost an hour to be tendered ashore. We were told the delay was because of all the food and equipment that needed to be taken ashore first. Additionally, the water was rather rough that day so it became a safety issue. 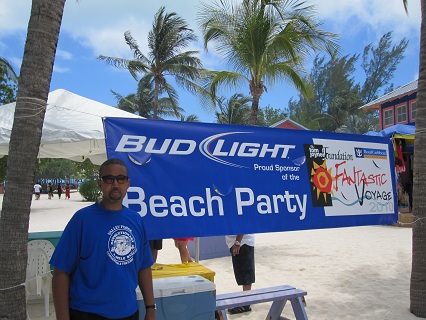 Welcome to the Beach Party 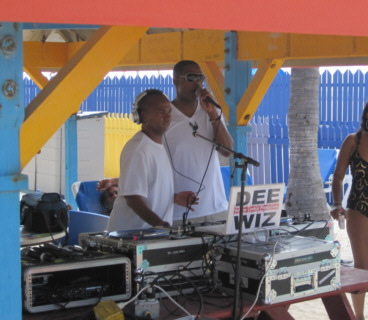 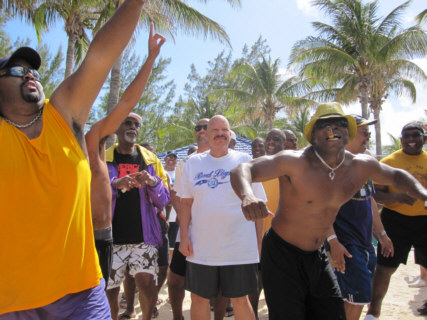 Tom Joyner with his frat brothers of Omega Psi Phi 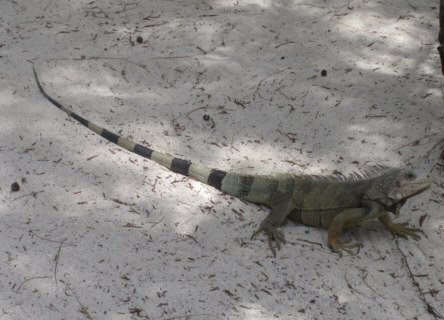 saw this iguana during our nature walk

This was the second visit to Coco Cay for Traci and me. We decided to do something a little different this time. We booked the Coco Cay Nature Walk shore excursion. For the next hour, our two guides led our small group on foot along a trail through a wooded section of the island. Though spotty, the shade was a welcome relief from the sweltering heat and humidity that day.

We were shown various plant life such as the Lignum Vitae, the national tree of the Bahamas. Although our group did no tasting, we were shown edible fruits that grow on the island such as wild dilly and sea grapes. There were signs and labels along the way identifying various flora. We were warned to stay away from some plants such as poison oak because touching it can cause an itchy rash. Surprisingly, I saw no signage warning visitors of this hazard. In addition to plants, we saw quite a few iguanas lounging in or under the trees.

Coco Cay is one of the more than 700 islands that make up the Bahamas. I was surprised to learn that Coco Cay actually has some history beyond being the private island where Royal Caribbean hosts its passenger beach parties. Our guides showed us the ruins of former slave houses. Coco Cay was also one of the locations where the infamous pirate Black Beard launched attacks on unsuspecting ships. There is a head stone containing Black Beard’s name but he is not actually buried on Coco Cay. He was killed and beheaded in Virginia.

One of the advantages of this tour is that a tram picked us up at the conclusion and dropped us off at one of the food pavilions. This food station was a little further up the beach than the one that most of the other cruise passengers went to. We did not have to wait in line to get food nor did we have a problem finding a seat. Our only problem was the seagulls waiting for their opportunity to swoop down and snatch our meals.

By the time we finished eating and walked down to the party area, the annual light-skinned vs. dark-skinned water gun battle was in full swing. Traci and I did not participate. The last time I joined this battle a few years ago, no one could figure out if I was light-skinned or dark-skinned. I got hit by both sides. We wandered around the beach and watched contests for the remainder of our time there. It was a very long line to be tendered back to the ship but the line moved rather quickly.

On the first night of the cruise, rumors were flying that 2010 would be the last Tom Joyner Fantastic Voyage cruise. Throughout the week, Tom addressed the rumors by saying that there will be a cruise in 2011; however, at the time he did not know what ship or the itinerary. He normally knows these details a year in advance but not this time.

Passengers were still encouraged to sign-up for next year. They would need to leave a $500 deposit. A refund will be given up until 30 days after the ship and itinerary is announced. Traci and I left a deposit. Hopefully, we will be partying with a purpose again next year. Main Page...

UPDATE: The Fantastic Voyage 2011 cruise will be leaving in March instead of May. Unfortunately, the new dates do not work for Traci and me. However, I encourage you to check out my friend Kibri's Fantastic Voyage Cruise Blog. It will be her first Fantastic Voyage and she is documenting the entire experience from preparation to cruising.