prev | Getting Ready | Daytime | Nighttime | Ports of Call | next

The amount of activities happening on the ship during the day is mind-boggling. We could find a schedule of events in the daily cruise publication, The Cruise Compass. There were exercise classes, a movie screening, art auctions, a fashion show, seminars, panel discussions, games, book clubs, and much more. Most were hosted by a celebrity or an authority in the field. Some of the activities Traci and/or I attended during the week were Black in America 3: The Black Church panel discussion hosted by Soledad O'Brien of CNN, movie screening of Just Wright introduced by lead actor Common, karaoke, Morning Devotion with Dr. Bobby Jones, Life Lessons hosted by Judge Mablean of Divorce Court, and the Fashion Show hosted by Korto Momulu of Project Runway. We obviously were not able to attend everything because some of the activities occurred simultaneously. Fortunately, some of the events were recorded and rebroadcast so that we could watch them on the TV in our cabin. 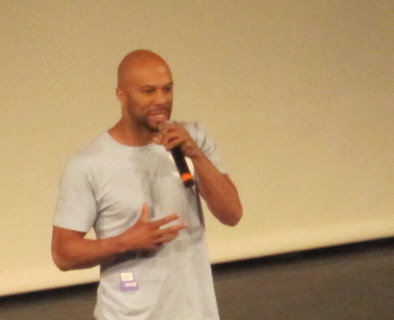 Around 2 PM, I would normally head up to the Pool Deck to relax and watch the games and contests organized by the Tom Joyner event staff. These activities ranged from musical chairs to Twister but always with the DJ thumping R&B in the background. These games were a lot of fun to watch.

One disappointment with the activities this year was the location and scheduling of the morning workouts with the guest instructors. Traci loves to work out and, consequently, has a huge collection of fitness videos. She designs my 5 AM workouts from them and has helped me lose 30 pounds so far. (For those who are interested, here is a list of fitness videos she uses to help me achieve this weight loss). One of the reasons Traci looks forward to this cruise every year is because she has the opportunity to work out in person with some of the celebrity fitness video gurus such as Donna Richardson Joyner. However, Donna told us that a week before the cruise, Royal Caribbean informed the Tom Joyner staff that they were not allowed to use the ship's workout facilities to teach the classes. This meant that the guest instructors had to scramble to find available space on the ship such as the basketball court. Traci did not like this because of the sun beaming down on her as she tried to workout. That was the last class she attended that week.

The ship seemed to be loaded with celebrities this year. We would see them in the elevators, in the halls, on the Pool Deck, in the dining facilities, and while waiting in line to get on or off the ship. They were enjoying the activities, parties, and concerts like everyone else. Star Jones, Omarosa, K-Ci of Jodeci, Sisqo of Dru Hill, Salt-N-Pepa, Blair Underwood, Malcom Jamal Warner, and members of the Tom Joyner Morning Show (TJMS) were just a few of the celebrities I saw while hanging out at various times during the week.

Although everyone speaks to each other on the cruise regardless of celebrity status, there were formal autograph signings. This was the first year Traci and I attended one. We happened to be at the right place at the right time. We were on the Promenade Deck saying hello and taking pictures with members of Full Force. When I turned around, I noticed a line was forming behind us. When I looked in the other direction, I saw the event staff removing the velvet rope and inviting us to the autograph signing table. We were handed a booklet in which to receive signatures. A new set of celebrities come to the table every 20 to 30 minutes. During our session, we were able to chat with and get autographs from Leela James, Montell Jordan, Byron Cage, Dr. Bobby Jones, Kangol Kid, and others. In an effort to keep the line moving, we were not allowed to take pictures with our own cameras. The Royal Caribbean photographers were taking random pictures as guests moved through the line. The photos they took were for sale later but we did not buy them. 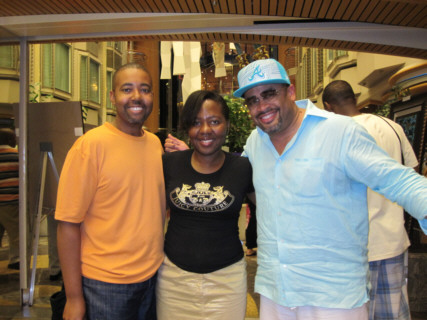 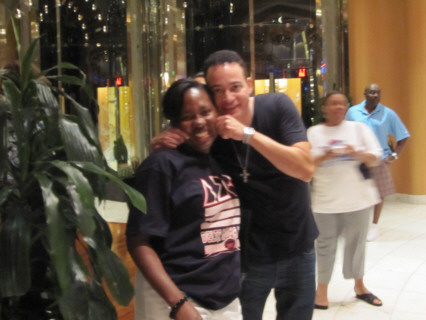 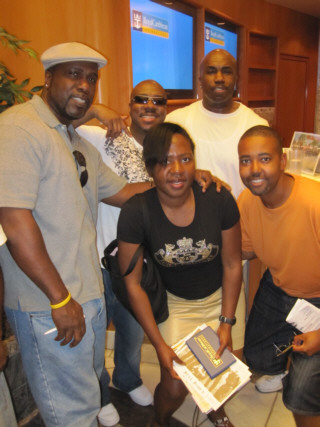 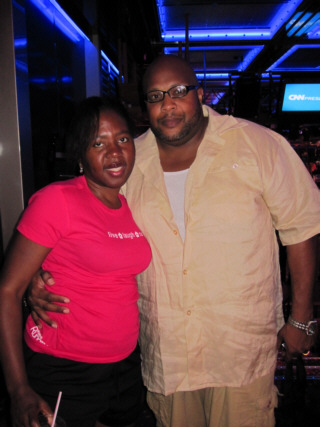 The sponsors were very active and generous on this cruise. They hosted events, contests, giveaways, and sponsored the concerts. Each evening, we entered our cabin to find the bed full of giveaways. We have learned over the years to always bring an extra duffle bag to carry all of the goodies we receive during the week. 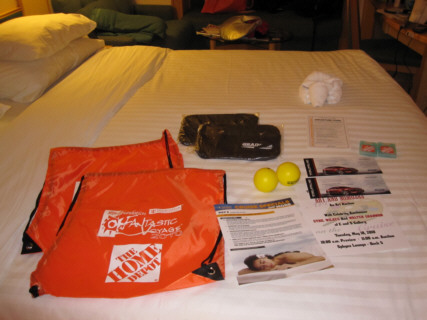 sponsor giveaways in the cabin every night

Home Depot representatives would give passengers a $5 coupon anytime they were spotted wearing or carrying something containing the Home Depot logo. Traci and I ended up with $25 worth of coupons.

Ford actually loaded two cars onto the Pool Deck of the ship. They held a contest in which two lucky passengers could win the cars if they answered the daily questions correctly and their names were picked in the drawing. It was a fun contest because the answers to the questions were posted on and inside the cars. We had to get in the cars and have a good look around to find some of the answers.

I enjoyed the free ice cream handed out at the afternoon Snickers Ice Cream Socials. For those who drink, Budweiser seemed to always be giving away free beer. Absolut and Seagrams Gin both hosted tastings. All these sponsor events and giveaways really added to the round-the-clock party atmosphere on this cruise. Continue...

prev | Getting Ready | Daytime | Nighttime | Ports of Call | next