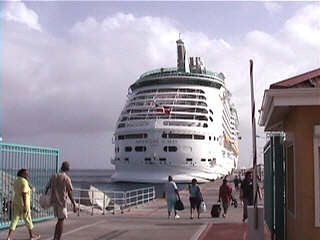 Traci and I finally went on the Tom Joyner Foundation Fantastic Voyage Cruise. It's the ultimate "party with a purpose" cruise that raises scholarship money for students whose funds have run out at HBCUs (Historically Black Colleges and Universities). This trip totally exceeded my expectations. Basically, the Tom Joyner Foundation rents out the whole Royal Caribbean Adventure Of The Seas cruise ship and provides top-notched entertainers, activities, and parties that are catered to listeners of his radio show. We saw many celebrities and met many nice people. Now I know why people go on this cruise year after year despite its hefty price tag. Here is my detailed review of the Tom Joyner Fantastic Voyage Cruise 2005...

So many thoughts went through my mind as Traci and I stood there on the ramp looking at the huge "Tom Joyner Foundation Fantastic Voyage 2005" banner hanging on the side of this gigantic Royal Caribbean Adventure Of The Seas cruise ship. After years of not going on this cruise because of the price or because it was sold out, we were now standing just a few yards away from the entrance of the ship after finally committing to do the cruise almost 10 months ago. I was very excited, but also a little nervous. I'd heard this is a party cruise. I don't consider myself a party animal. Will I fit in? The cruise motto is What happens on the ship stays on the ship! What was I going to see on this cruise that I am not supposed to talk about? Just then, I felt a nudge. It was Traci who whispered, "Mike, isn't the guy in front of us one of the comedians from BET ComicView?" Sure enough, it was comedian A. J. Jamal. Wow! Our first celebrity sighting and we weren't even on the ship yet. 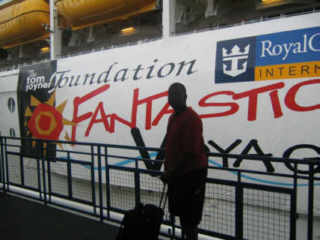 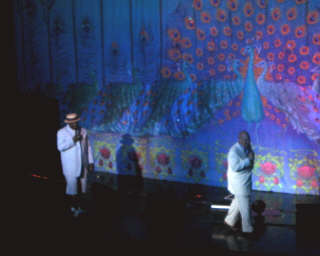 We entered our ship cabin and found a bottle of champagne, a fruit basket, and a card from the Tom Joyner Foundation welcoming us aboard and thanking us for our contribution to the scholarship fund. These were the first of many gifts (shirts, duffle bags, hats, gadgets, etc.) that were waiting for us in our room each evening.

We had an inside cabin overlooking the Promenade Deck. Although it was one of the least expensive cabins on the cruise (but still almost triple the price it would be on a regular Royal Caribbean 7-day cruise - Ouch!), we later found it to be one of the best cabins to have on a Tom Joyner cruise. Many of the theme night parades and parties take place on the Promenade Deck. On these nights, we could simply open our curtains and see all the action instead of standing in the crowd hoping to get a glimpse. However, if you are a light sleeper, this is not the cabin for you. On the party nights, we could hear the music thumping and see the party lights flashing through our curtains at 4 a.m.. There ain't no party like a Tom Joyner party 'cause a Tom Joyner party don't stop! 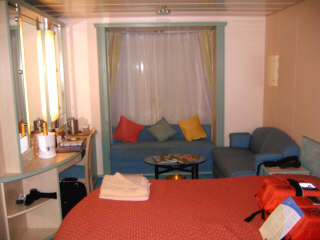 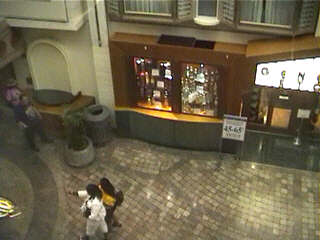 view of the Promenade Deck from our cabin

Not A Typical Cruise

On our bed was a copy of The Compass, the daily newsletter listing all the ship activities and important announcements. As we read through The Compass, we were beginning to realize this cruise was not going to be like any cruise we've been on. Basically, Tom Joyner had rented the whole ship for a week and tailored the activities and entertainment to the demographic of the listeners of his radio show. Instead of the regular cruise ship evening entertainment, the evening line up included concerts like Chaka Khan, Eddie and Gerald Levert, Morris Day and the Time, and Kem. The morning exercise classes were being led by actual fitness guru's such as Donna Richardson, Mocha Lee, and Ryan Gentles. There were Think Tank discussions with panelists such as BET anchor Jacque Reid, Congressman Jesse Jackson, Jr., and actress Sheryl Lee Ralph to debate social issues. And, of course, there were plenty of parties.

To further enhance the Tom Joyner experience, there was constant soft classic R&B music playing in the elevators and the dining halls. Some of the channels on the closed-circuit ship television showed movies that feature black actors and comedians.

There were approximately 3000 of us on this Fantastic Voyage. The ages seemed to range from 30's to 60's with most people appearing to be middle-aged. The women greatly out-numbered the men.

No matter what their ages were, everyone we met on this cruise was warm and friendly. The first night was called Represent Night in which everyone wore clothing that represents, their hometown, sports team, fraternity/sorority, college, etc.. Traci wore one of her Delta Sigma Theta shirts; therefore, everywhere we went on the ship that evening we heard the Delta call or "Hey, Soror". I was wearing my Hampton University T-shirt so we met several Hampton alums and people who know people that went there. I even met a Howard University alum who wanted to bring up the ageless, light-hearted debate of which university is "The Real HU". I thought Represent Night was a great way to meet our shipmates. We all got along so well that some of the Royal Caribbean crew thought we all knew each other before we got on the ship. continue...