Getting Ready | Daytime | Nighttime | Ports of Call | next 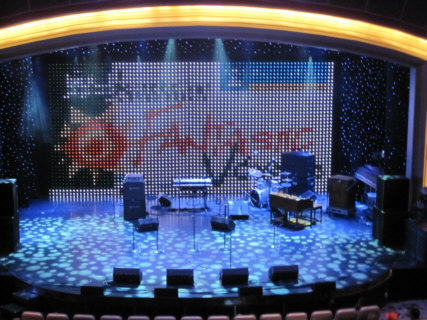 Traci and I had so much fun on the Tom Joyner Fantastic Voyage Cruise this year! The concerts, the parties, the people, the games, and theme nights were all incredible.

With just a week and a half to go before our 5th Tom Joyner Fantastic Voyage cruise, excitement was building. We had been receiving the Cruise Chronicle emails from the Tom Joyner foundation over the past few months. These emails provided details for concert schedules, additional celebrity appearances, seminar schedules, theme night designations, the pre-cruise party in Miami, and other information. It was shaping up to be an awesome cruise.

We had chosen our cabin and begun paying for the cruise the previous year. The cost of the Fantastic Voyage cruise is expensive - about 3 times the amount of a general 7-day Caribbean cruise doing the same itinery. However, since the money supports the Tom Joyner Foundation scholarship fund, about half of the price qualified for a tax deduction. The foundation sends a receipt indicating your write-off amount for the year. In some years, this amount was almost 70% of the cruise price.

We had already done our online check-in a few weeks in advance and had printed our SetSail Pass required to board the ship. The only thing left to do was pack. Packing for a Tom Joyner cruise is always a challenge because of the outfits/costumes we bring to participate in the theme nights (i.e., Formal Night, White Night, 70's Night, Mardi Gras Night, etc.). With airlines now charging to check luggage and charging extra if your luggage is over 50 lbs., we always have to question ourselves about the necessity of every article of clothing we pack. We begin packing a week or two before the cruise to give us time to change our minds about what to bring. For us, shorts and a T-shirt are all we need during the day. We return to the cabin around 5:30 PM or so to change into our theme night clothing before dinner and wear it until after the midnight theme night parade. After the parade, we normally change into casual clothing such as shorts or jeans and tennis shoes for the 2 AM concert. We fly Southwest Airlines whenever we can because it is one of the few airlines that still allows each passenger to check two bags without being charged a fee, as long as the bags are under the weight limits. For our departure flight to the cruise, Traci and I can normally pack so that we only check one bag per person. We normally have to bring an extra duffle bag and check it along with our suitcases for the flight home. This is because of all the sponsor giveaways we receive during the cruise.

We were pleased with our stay at the Spring Hill Suites - especially since it was free due to the Marriott points we've accumulated from business travel. It has a nice complimentary breakfast buffet. It is in walking distance from stores and restaurants. The hotel provides a complimentary airport shuttle. This shuttle was the only glitch during our stay. Due to miscommunication between the shuttle drivers, Traci and I waited for 45 minutes to be picked up at the airport. Our driver apologized repeatedly during our ride to the hotel as did the front desk when we arrived. As consolation, they loaded us up with water, cookies, and other snacks. There were no hard feelings on our part.

Tom Joyner had organized free transfers to the ship from both the Miami airport and the Fort Lauderdale airport on the day of embarkation. Therefore, after enjoying the breakfast buffet at our hotel, we had the hotel shuttle drop us off at the Arrivals section of the Fort Lauderdale Airport. We then found the staff holding the "Tom Joyner Fantastic Voyage" signs and joined the rest of the cruise passengers for the 30-minute ride to the ship.

Traci and I carried our own luggage onto the ship instead of leaving it outside the bus for the porters to deliver it to our cabin later in the evening. Check-in was a breeze and before we knew it, we were on the ship, The Liberty of the Seas. It would sail at its 3,634-passenger capacity.

There was a box of candy and a bottle of wine from the Tom Joyner Foundation in our cabin when we arrived. We spent a short time unpacking our suitcases. The thing I like about Royal Caribbean ships is that the beds are high enough to slide our suitcases under them.

Our cabin attendant dropped by to introduce herself. She was such a sweet lady who took good care of us during the week. Her only challenge seemed to be making the towel creatures each evening. We had a difficult time figuring out what she made with our towels and wash clothes. Some of these creations looked downright obscene. Traci and I always got a good laugh when we saw them.

Passengers don't have to worry about the general gratuities such as cabin attendant and dining staff that typically get added to your bill on other cruises. Tom Joyner takes care of all these gratuities. They don't show up on your bill. However, you are expected to tip for extra services such as drinks, spa, tour guides, etc..

Because we had booked this cruise during last year's Fantastic Voyage cruise, we received $200 of ship credit and were able to get our preferred inside cabin with a window overlooking the Promenade Deck. We were located mid-ship. This was a great room for people-watching and observing the midnight theme night parades/parties. On the other hand, this is not such a good room for light sleepers. We found out our cabin was almost directly over the DJ's speakers. There is music playing around the clock on this cruise. The music really cranks between midnight and 2 AM when the Promenade Deck parties and parades happen - so much so that the bass sometimes rattled items in our cabin. Despite this, Traci and I had no problems sleeping. We were normally so sleepy when we returned to our cabin at 4 AM (sometimes 5 AM) that we could have probably slept through a jet engine blasting in our room.

Being Platinum members in Royal Caribbean's Crown & Anchor customer loyalty program, Traci and I each received extras such as a coupon booklet for various ship purchases and $7.95 of internet credit. The internet credit came in handy the last day of the cruise for printing our boarding passes for the flight home. The Tom Joyner cruise sponsors were not offering free internet and boarding pass printing service like they did in previous years. 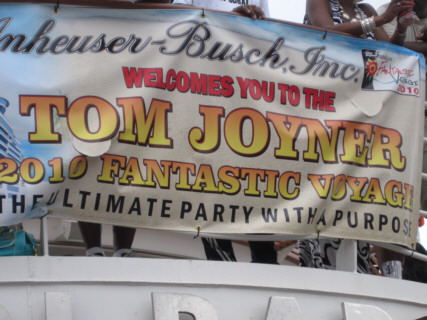 Now that we were unpacked, it was time to enjoy our vacation. The week-long "Party With A Purpose" was already in full swing. DJs were pumping serious dance music on the Pool Deck and inside the ship on the Promenade Deck. A massive line dance can break out at any time on this cruise. We saw some familiar faces from previous Fantastic Voyage cruises. We also had a handful of celebrity sightings: Roland Martin of CNN, K-Ci of Jodeci, and comedian Gary Owen to name a few.

Most people were wearing their Represent Night clothing when they arrived on the ship. Represent Night attire is clothing that represents your interest or affiliation such as your hometown sports team, your alma mater, your fraternity/sorority, etc.. It's a nice way to meet your fellow cruisers who may have the same affiliations as you. I was wearing my Hampton University T-shirt and consequently said hello to several Hampton alumni, including my friend Candace whom I hadn't seen since my college days. Traci was wearing her Delta Sigma Theta T-shirt. She gave the Delta greeting to many sorors that day. Continue...

Getting Ready | Daytime | Nighttime | Ports of Call | next