Lifestyles of the Rich and Infamous

Friday was our last full day in Paris as a group. There were no activities in the itinerary for that day so people were free to enjoy their vacation in whatever manner they decided. Some did a hop-on hop-off tour of Paris. Some took the train to Amsterdam for the day. As for Traci and me, we went to see Versailles Palace (pronounced Ver-sigh Palace). This was a do-over for us. During our 2003 Paris trip, we took the train to Versailles only to find out the palace is closed on Mondays. I haven't been able to live that mistake down. For the last 16 years, every time someone mentioned Paris, Traci was sure to remind me about the time we took the train all the way out to Versailles on a day it was closed. Well this time, I did my research. Because of the strike, I was not going to take a chance on the train. Instead, two weeks before our trip, I booked a guided tour offered by ParisCityVision. I only needed to sign us up for their half-day tour that visits the palace because despite my error 16 years ago, we were still able to explore the Versailles garden and the Trianons which were open on Mondays back then.

Traci and I took an Uber to the ParisCityVision office located across the street from the Louvre. We needed to check-in by 1:30 PM for the 2 PM departure by motorcoach. Traci and I slept during most of the 50-minute ride to Versailles. At the palace, we were given a small receiver and ear buds so that we could listen to our guide narrate through her headset while leading us on the tour. This form of communication was definitely needed because the palace was crammed with tourists that day. Our guide gave excellent commentary and did a great job of navigating the crowds.

Although Versailles Palace was occupied by several royals between the 17th and 18th centuries, it is probably best known for being the extravagant home of Louis XIV in the late 1600's. This place is a must-see! We saw only a small fraction of the 700 rooms of the palace. Nonetheless, what we saw was truly eye candy. There are huge paintings on the ceilings, sculptures, gold-leaf, elaborate halls, elegant furniture, and of course the famous Hall of Mirrors. We even saw the secret door used by Marie Antoinette to escape the invading mob during the French Revolution of 1789. The common people of France in those days were not at all happy that the royals lived a life of excess while the rest of the country lived in poverty. 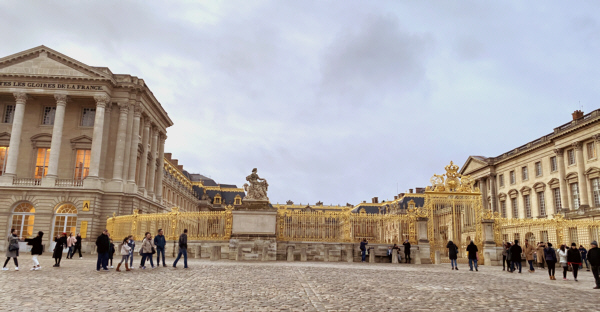 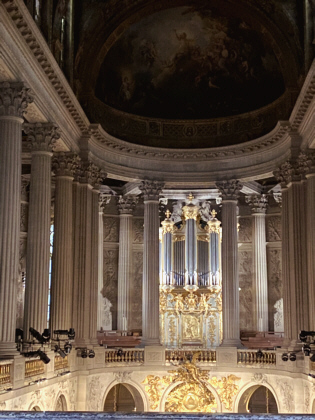 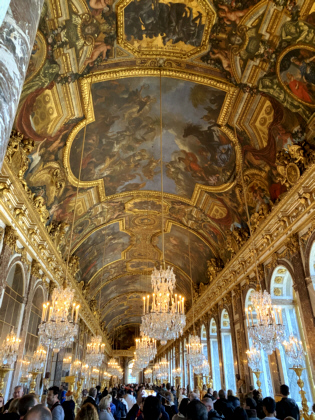 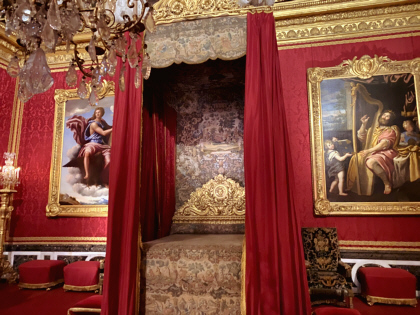 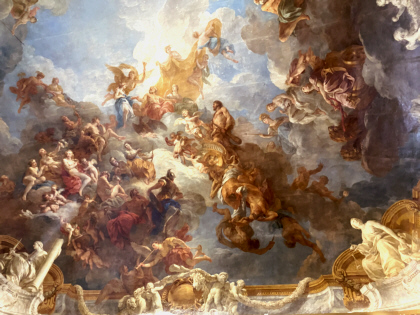 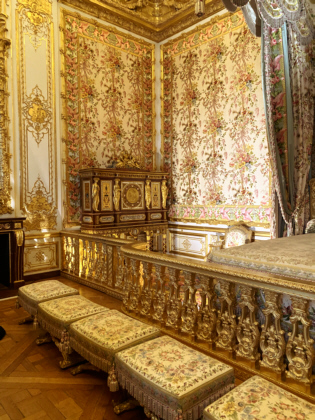 We were given about 45 minutes to explore the gardens and/or gift shop on our own before we needed to be back on the bus. This was the start of a stressful pattern for Traci and me any time we did a tour. We were always rushing to get back to a bus or train on-time. Versailles is a huge property. We underestimated how far we were from the parking lot. We made it to the parking lot and found there were many more buses there than when we first arrived. We were not sure which one was ours. Suddenly, we heard two short horn blasts. We turned and saw our tour guide and the bus driver waving to us from the bus across the lot. Before I could apologize for being 5 minutes late, the pleasant guide apologized to us because the bus was not parked where we were let off.

Our ride back to Paris was quite a bit longer due to rush hour. Every time I thought the traffic in Paris could not get any worse, it did. We creeped along the jammed streets and even through a tunnel under the River Seine. When we finally arrived back at the ParisCityVision office, Traci tried to get an Uber to take us back to our hotel. We had no luck. There were none available. Therefore, we pulled up Google Maps which indicated it was a 50-minute walk to get back to the hotel. At this point in the trip, 50 minutes seemed like a short walk so we set off into the night on foot. It was a pleasant walk as some of the streets were still lined with dazzling Christmas lights.

admiring the decorated streets while walking back to our hotel

We were not at the hotel long before we got a message from our friends that everyone was getting together for dinner at La Terrasse du 7eme where we dined as a group earlier that week. Those who had gone to Amsterdam for the day were a little late joining us due to a train delay but eventually all 15 of us were together for our 'last supper'. Most of the group would be flying back to the U.S. the next day. Just like the last time we dined at La Terrasse du 7eme, our meal and the service were great. We all had a good time recapping our day. I could not believe how fast our week together had flown by.

We all made the short 20-minute walk back to the hotel after dinner. Traci stayed up late chatting with the some in our group while I retired to our room to start packing. Even though Traci and I were not flying back home for another four days, we would be changing hotels the next day. I caught a really nice reggae concert on TV that night before I finally fell asleep. Traci eventually made it back to the room after 2 AM. continue...