Saturday was check-out day. Traci and I left our luggage with the hotel since we were not ready to move to our new hotel yet. Other than the move, Traci and I did not have concrete plans for the day. We decided to visit the grand building of Invalides (pronounced An-val-eed) which was close to the hotel and was highly recommended by Milan, our guide for the Illuminations tour. Candace made the 15-minute walk with us. Upon reaching Invalides, we said goodbye to Candace. She was headed to the Louvre to enjoy a few hours before her flight back to Chicago. I'm sure we will see her again at a Hampton homecoming, class reunion, or maybe somewhere else around the world. Like us, she likes to travel. We are still amazed about the time in 2010 when we ended up on the same cruise!

Traci and I grabbed a bite to eat at the cafeteria located in the ticket building of the complex before we entered Invalides. Before this trip, I knew that Invalides is where Napoleon Bonaparte's tomb is located but not much more. Invalides is where France's military heroes and statesmen are funeralized and/or interred. It started as a hospital for injured and disabled soldiers (invalids) at the order of Louis XIV in the late 1600's. The high dome of this magnificent building can be seen from many areas of Paris. In fact, during the week, Traci and I used the dome of Invalides along with the Eiffel Tower and an unknown skyscraper as landmarks for determining which direction to walk to get back to our hotel. 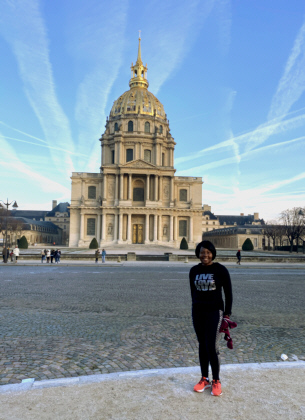 The inside of Invalides is jaw-dropping. The high dome ceiling is decorated with large paintings and sculptures. We walked around looking at the elaborate tombs of Napoleon's family and other military leaders. We went downstairs to see the tomb of Napoleon Bonaparte which is surrounded by very large angel sculptures. Although the tomb was much bigger than I was expecting, it was the 12 magnificent angel statues that captured my attention. 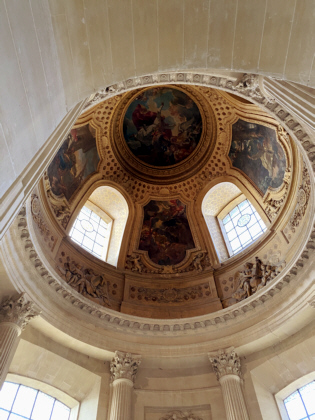 inside the dome of Invalides 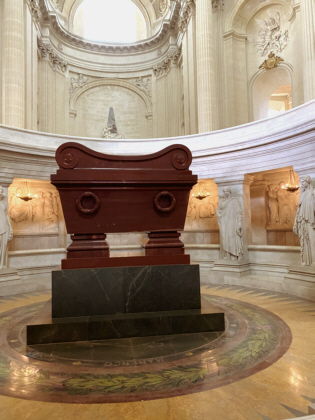 From there, we entered the Veterans Chapel of Invalides where the original battle flags of adversaries defeated by the French over the centuries hang from the ceiling. Today, the funerals of dignitaries such as former French president Jacque Chirac take place here. 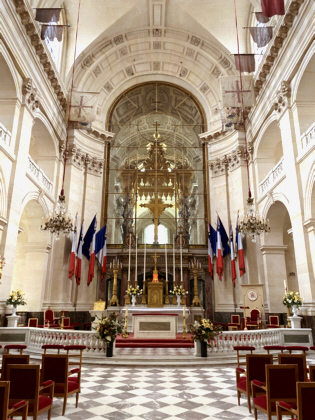 There is so much more to Invalides than I imaged. There is an extensive military museum (Musée de l'Armée). Traci and I spent at least 2 hours browsing the items displayed there. We also walked through the armor section of the museum containing knights' armor. It is amazing to me to know that people would go into battle wearing all that heavy gear. In addition to the museums of Invalides, we had a look at its courtyard and its spacious well-manicured grounds. I was impressed by how much more there was to see at Invalides than the tomb of Napoleon. 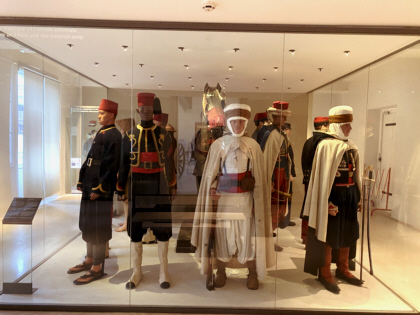 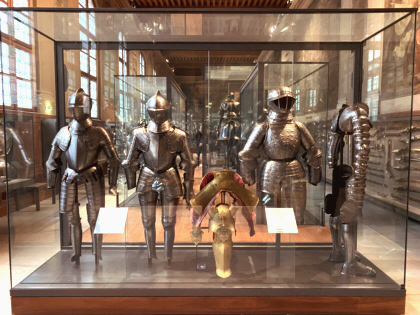 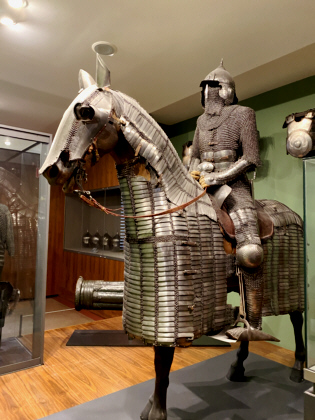 From Invalides, Traci and I walked to the Champs Élysées where we finally went to the Nike store that was actually open. Being a runner and fitness fanatic, Traci loves checking out Nike stores all over the world. This particular store was one of the most exciting ones I've seen. There was a live DJ playing some bumpin' music. While Traci browsed, I enjoyed bobbing my head and tapping my foot to the music - especially when he started spinning the reggae jams! 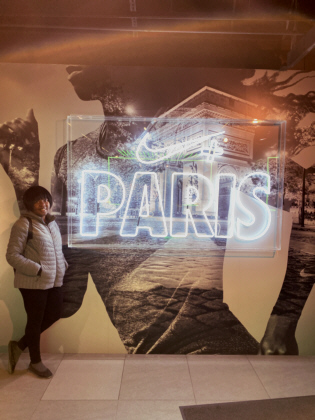 Nike store on the Champs Elysees

We made the 45-minute walk back to our hotel. We were preparing to make the move to our new hotel but when Traci checked Uber, she saw that the price for the 3-mile ride was 60€ (approximately $65 U.S.). We decided to wait to see if the price would drop. In the meantime, we set out to find something to eat. It seemed like I was always hungry while we were in Paris. I guess all the walking we were doing was burning calories faster than my body is used to. This trip was one of the few times I actually lost weight on vacation. I lost three pounds of the holiday weight I gained between October and December.

Traci and I were hoping to check out an African/Caribbean restaurant we had seen earlier in the week. The restaurant is located up the street from the hotel and it features live jazz. Unfortunately, when we arrived there, there was a sign indicating the restaurant was closed and would not re-open until January 8 - our departure day. It was at this time that I noticed that even though it was a Saturday, several of the restaurants in the area were closed. I was wondering if this was due to the holiday season or the transportation strike. Oh well, Traci and I decided to dine at a nearby Thai restaurant instead. The food was delicious! Furthermore, the cheerful woman who served us seemed genuinely happy to see us.

Traci checked Uber again after we walked back to the hotel. It was now after 8 PM and the price had dropped from 60€ to just 19€ (approximately $21 U.S.) - sold! We said goodbye to the hotel staff and thanked them for a pleasant stay. I also thanked the guys at the front desk for allowing me to practice speaking French with them each day even though they spoke English fluently. The funny thing about this is that I found out that day that they were not French. Their first language is English too. Hah! Hah! By contrast, I am pretty sure this was not the case for the Uber driver who drove Traci and me to our new hotel. I have never heard anyone speak French as fast as that driver. I don’t even think I can speak English that fast. I was only able to catch every 10th word at most of what he was saying.

Never Saw the Light of Day

Traci and I stayed at the Courtyard Marriott Paris Gare de Lyon for four nights. We moved to this hotel because we had enough Marriott points such that our four-night stay was free! Hallelujah! This Courtyard Marriott is relatively new and is conveniently located across the street from the Gare de Lyon train station. This turned out to be a blessing because the metro lines (1 and 14) that make stops at Gare de Lyon were not affected by the strike. These metro lines are automated - meaning they do not have human conductors. I was surprised by the diversity of this section of Paris. I noticed that there were many more people of color on this side of town.

The Courtyard Marriott is a very nice hotel. Traci was happy to see it had a fitness room even though she did not have much time to use it. We had a room on the 14th floor. To get to our floor, we had to swipe our key outside the elevator and enter our floor number before an elevator door would open to let us in. There was no floor number panel inside the elevators. Traci was quick to notice the similarity between our room number at our previous hotel and this one. At our previous hotel, our room number was 408. At the Courtyard Marriott, we were in room 1408.

Our room at the Courtyard was spacious. It had a refrigerator. The bed was really comfortable. The toilet paper had “Kleenex” printed on every second square. Unlike our previous hotel, it actually supplied wash clothes instead of just towels. What we liked most about our room was the view. We could see the Eiffel Tower, the River Seine, Invalides, Colonne de Juillet, and other famous Paris monuments. We left the curtains open at night so that we could admire the City of Light from above. One night, I happened to awake and see a huge orange moon near the horizon. I tried to take a picture of it with my old rinky-dink iPod but I just could not capture the glory. As excited as Traci and I were about the view from our room, we would never experience it during daylight hours. The sightseeing itinerary that we had planned had us leaving the hotel each morning before sunrise and not returning until nighttime. continue... 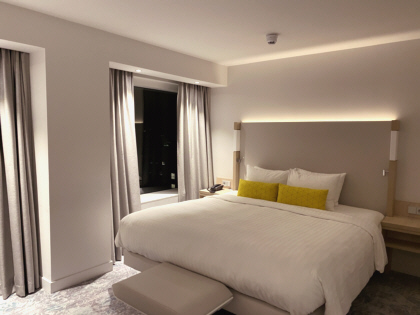 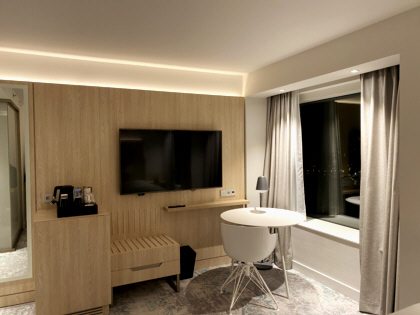 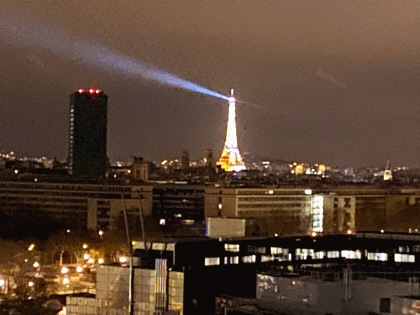 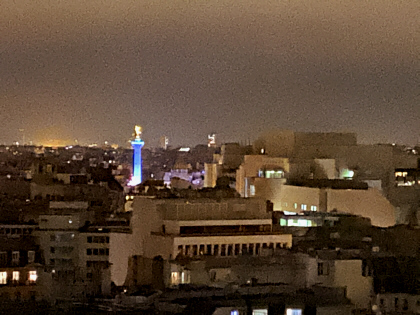