Our hotel phone rang early Monday morning. It was our friend Candace who by now had earned the nickname “Project Manager” by our group because of her organizational skills that helped our group of 15 get where we needed to be on-time during this Paris trip. Candace was calling to let us know there had been a change with the Black Paris Tour we were scheduled to take that morning. Originally, our group was supposed to be picked up at our hotel but we were informed that we would now need to make our way to the Hyatt for our pick-up instead. Candace organized two Uber vans to get our group there but this meant that everyone needed to be ready to go earlier than we had planned.

At the Hyatt, we met with the other tourists who would be joining us for the day. There were 25 of us in all. Wouldn’t you know it? It turns out, one of the other tourists knew some of the same people we knew at Hampton University – small world! Anyway, as the name implies, the Black Paris Tour focuses on the history of black people in Paris. Historically, many famous black Americans such as Josephine Baker, Langston Hughes, and Richard Wright spent significant time in or lived in France. In France, they were free from the segregation and discrimination they faced in the U.S.. During our 2003 Paris visit, Traci and I did this tour with the company’s founder, Ricki Stevenson. Back then, Ricki walked our small tour group all over the city and had us on metros and public buses as she narrated our visit. Sixteen years later, I was pleased to see how much her company has grown. This time, we were loaded onto a motorcoach to be driven around Paris while our tour guides gave us commentary. Ricki Stevenson was not present this time. Instead, her daughter, who was a kid when we met her back in 2003, and a guide named Nawo were responsible for our group. 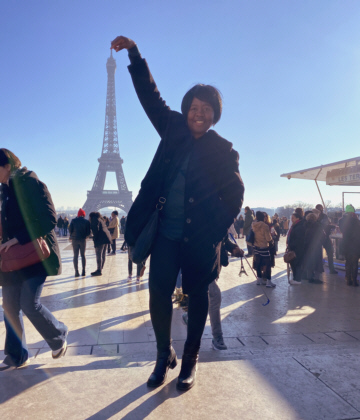 having fun in Trocadero Square

The tour took us past some of the major Paris monuments such as the Arch of Triumph and Trocadero Square where you can take great pictures of the Eiffel Tower. We made a stop at the Théâtre des Champs-Élysées (Champs Elysees Theater) where Josephine Baker, the famed American dancer who was adored by the French, made her Paris debut in the 1920’s. At first, we were told by the theater security that our group was only allowed to peek through the doors to see the lobby which remains in its original state. This restriction was due to a performance that was happening at the time. A short time later, a lady who works at the theater invited us in to follow her quietly up the steps to the balcony where we were able to watch some of the ballet performance that was happening at the time. This was an unexpected treat. Some in our group would come back to the theater later that evening after the tour to see a show. 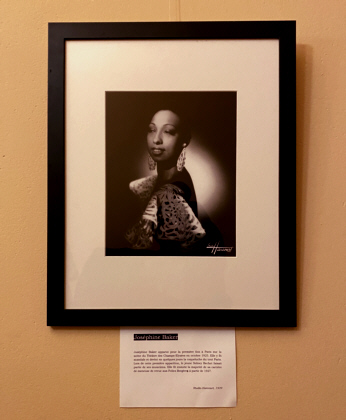 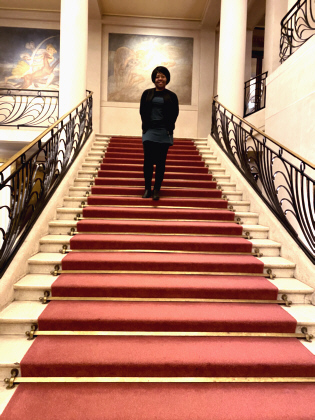 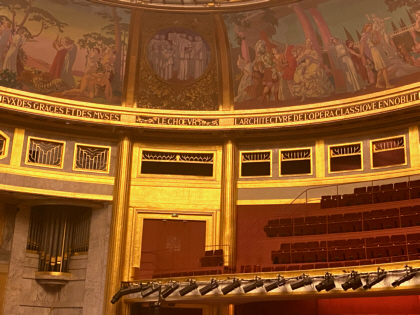 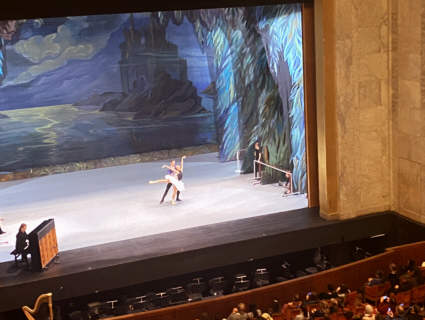 We made a stop at a church where we saw a statue of a black Virgin Mary. The rest of our tour was mainly dedicated to learning about Alexandre Dumas and his father. Alexandre Dumas was a black Frenchmen who is probably most known as the author of “The Three Musketeers” and “The Count of Monte Cristo”. His father was a successful general in the French military who became known as the "Black Devil". We were taken to a park where we could see monuments dedicated to the Dumas family. Alexandre Dumas appears sitting in a chair above sculptures representing people enjoying his writings. The nearby monument for General Thomas-Alexandre Dumas (Alexandra's father) is controversial because it is a sculpture of broken shackles even though the general was never a slave. By the way, Alexandre Dumas’ father’s name appears on the Arch of Triumph erected under the order of Napoleon Bonaparte as an homage to his military conquests. We were told Napoleon was not a fan of black people and thus General Dumas’ name was added to the monument after Napoleon’s death. We saw it as we were being driven around the Arch. 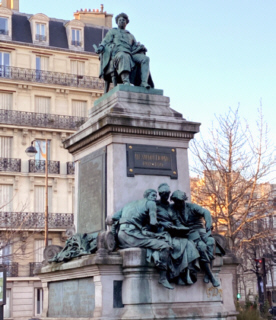 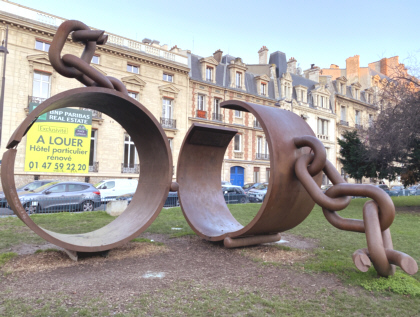 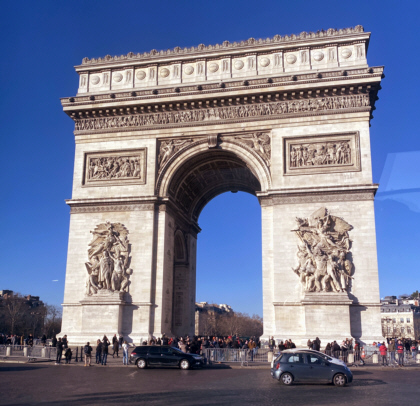 As part of the tour, we had a group lunch at Le Chalet de Neuilly. When it came to mealtime in Paris, I was learning to expect the unexpected. Michelle from Michigan and I checked on each other. Like me, she does not like certain foods on our plate to touch. My salmon was unexpectedly served on a bed of ratatouille. The fish was actually good after I managed to cut off the layer that was touching the ratatouille. I know that sounds weird to some people but Michelle understands because she makes similar maneuvers with her food. Michelle is a runner who Traci and I first met when we traveled to China in 2017 to participate in the Great Wall Marathon. Since then, we have run into her at races around the U.S. as Traci works towards her goal of running a half marathon in all 50 states. And now, we found ourselves hanging out in Paris celebrating the birthday of our mutual friend Kelli. It is fascinating how we are all connected.

This lunch at Le Chalet de Neuilly was the first of several times during the week that we would sing “Happy Birthday” to Kelli. The staff brought out an interesting looking cake with candles on it. It turns out the cake was fake. This allowed them to reuse it for others in the restaurant who were celebrating a birthday.

After lunch, we witnessed just how horrendous the Paris evening rush hour traffic is. I'm sure the strike did not help the situation. Our motorcoach could only inch along through the extreme gridlock. Even emergency vehicles with flashing lights found themselves making only slightly better progress than the rest of the vehicles caught in the jam-up. Our guides kept us entertained with more black history, photos, and even recordings of France's popular music.

Our bus inched its way through the Pigalle section of Paris where the famous Moulin Rouge is located. It is a boisterous area that has sex shops and who knows what else. Not far from there is a section of Paris known as Little Africa. This is where immigrants from the African continent tend to settle. In 2003, Traci and I had the opportunity to walk through the open-air market of Little Africa when we did the Black Paris Tour on foot; however, this time all the traffic must have made the stop impractical. We only looked at it through the bus windows. 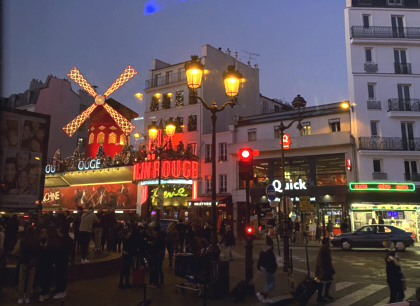 The famous Moulin Rouge is located in the Pigalle neighborhood of Paris.

We finally made it back to the Hyatt where we said goodbye to the people we met on the tour as well as the guides. The guides said goodbye to us in typical French fashion with a hug and a kiss on both cheeks. The tour was nice but having done the walking version and the bus version, I much prefer the walking tour because it gave me the opportunity to experience Paris with more of my senses instead of just seeing it from the bus window.

After arriving back at our hotel via Uber, a group of us decided to walk down the street to the Monoprix to pick up some items. Monoprix is a department store that contains a grocery store. I saw a few of these around Paris. Even more common but not the same thing are the Franprix stores. These are conveniences stores more along the line of 7-11.

For dinner that evening, about 13 of us walked 20 minutes to dine at La Terrasse du 7e. We were led up the spiral staircase to a large table upstairs. While ascending the steps, I thought to myself, “I sure hope the waiters don’t have to keep going up and down these steps.” Well, I later found out the waiters indeed ascend and descend these steps with their food trays many times during their shifts. They must be in great shape. As for us, we had a good meal at La Terrasse and lots of laughs as we recounted our experiences in Paris thus far. We did not leave the restaurant until after 11:30 PM. continue...