Thursday, January 2, 2020 was the big day – Kelli’s 50th birthday! We were up early so that our group could be at Trocadero for our 9 AM photo shoot. Yes, to commemorate Kelli’s birthday adventure, we were going to be 'supermodels' for an hour or so. We used two Uber vans to get our group there. It was a cold morning. The top of the Eiffel Tower was covered in fog. There were several other people in the square that morning who had hired professional photographers. We saw some people taking wedding pictures.

Our group was wearing purple at Kelli’s request. It is her favorite color. We met our photographer Matthieu Waddell and he immediately went to work. We posed for several group shots with the Eiffel Tower behind us and then posed for individual or couple shots at various places around the square. As usual with our experience at Trocadero, there was some drama. This time, it was a man chasing another man while shouting “He stole my shoes! He stole my shoes!” The police who patrol the square dealt with the situation while everyone else got back to their photo sessions.

After the photo session, we had several hours before our next group outing; therefore, Traci and I decided to check out one of the attractions we did not get a chance to see when we visited Paris in 2003 – Sainte Chapelle. We took an Uber from our hotel to get there. The line of people waiting to enter Sainte Chapelle extended out of the entrance for about a half a block. I was initially happy that Traci and I bought our tickets online before we came. We showed our tickets to the security guard and he told us to stand in the short line where there were only three people ahead of us. Yay! Well then, I realized our position made no difference. We waited there for quite a while as he let bunches of people in the long line enter. When it was our turn, we ended up being grouped together with everyone else to go through the airport-like security checkpoint. After standing in another line, we finally got to the portion where we were divided by those who already had tickets and those who needed to buy them.

I had seen pictures of Saint Chapelle and was prepared to be blown away when I stepped inside; however, I was a little confused when Traci and I first entered. The place was dark and much smaller than I had imaged. It was not until we reached the top of the narrow, winding staircase that we had our Wow moment. It was glorious! The whole sanctuary was surrounded by 50-foot stained-glass windows depicting 1113 scenes from the bible. It was actually fun to just hang around the top of the steps and listen to the reaction of people when they first see this place.

Sainte Chapelle was built in the 13th century to house Christ's Crown of Thorns and other precious relics of Christianity. These artifacts are no longer housed in Sainte Chapelle; however, the large, colorful stained-glass windows are still a major draw.

Traci and I decided to share an audio guide device instead of getting one for each of us. This turned out to be a bad idea. The maximum volume on the thing requires it to be really close to your ear to hear the commentary. We were not having success with both of us trying to hear it at the same time; therefore, we decided to take turns listening. That was taking too long so I let Traci use it while I just admired the beautiful sanctuary. Traci really enjoyed using the audio guide to identify the bible scenes that were depicted in the windows. 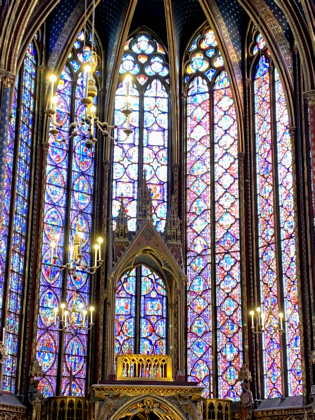 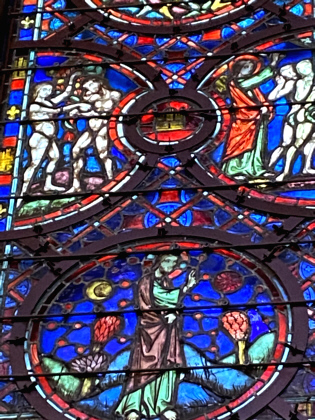 some of the 1113 Bible scenes depicted in the stained-glass

It was very cold inside Sainte Chapelle – even as the crowd grew. I ended up putting my gloves on. Traci and I spent about an hour visiting this site.

We Get Knocked Down But We Get Back Up

From Sainte Chapelle, we went to Cafés Richard across the street for lunch. I guess they must be used to tourists because Traci and I were greeted in English before I even had a chance to say "Bonjour". Cafés Richard became one of the most bizarre dining experiences we had in France. When we were first seated, I mentioned to Traci that it did not seem like our waiter was having a good day. He did not smile and he barely spoke. Later I noticed he was being yelled at in French by another waiter. Nonetheless, our meal was very good. We decided to try French cuisine – crepes (thin pancakes). I had the ham & cheese crepe. Traci had the cheese crepe. For dessert we shared the butter sugar crepe. As we were waiting to pay our bill, we suddenly heard glass and dishes breaking. We turned around and saw our waiter and the waiter who was yelling at him earlier engaged in a fist fight near the bar! The other employees rushed in to break up the fight. You could hear a pin drop in the café after the melee. What made this incident even weirder was that both waiters went right back to work. Our waiter, who now had a red mark on his neck, came to our table with the credit card reader so that we could pay our bill. He was just as expressionless as he was when we were first seated. I asked him if he was okay and he nonchalantly said yes. What a bizarre lunch experience.

Notre Dame Cathedral is located just around the corner from Cafés Richard. We were curious to see how the reconstruction was coming along. Eight months prior to our Paris trip, we along with the rest of the world watched the breaking news footage of the nearly 800-year-old cathedral engulfed in flames. It was heartbreaking to watch. During our 2003 Paris trip, Traci and I toured the cathedral and took in a beautiful view of the city from its bell tower. Now, tourists are no longer permitted to enter the building. There is a wall around the cathedral containing text that describes the April 15, 2019 fire and the efforts to restore the cathedral. From the front, Notre Dame shows no evidence of damage. However, viewing it from the sides and back, we could see the scaffolding and restoration equipment.

Reconstruction of Notre Dame Cathedral After the April 15, 2019 Fire 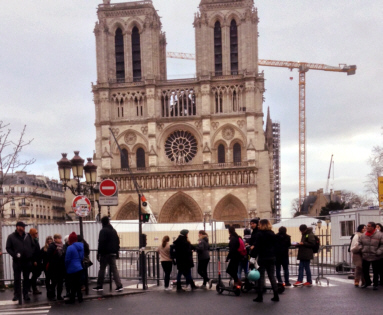 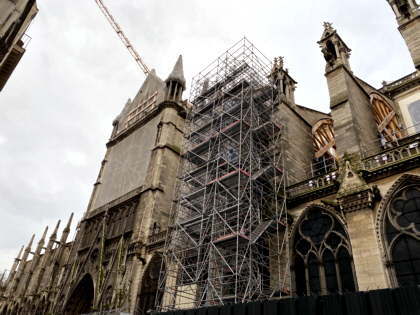 We still had several hours before our next group outing; therefore, Traci and I decided to walk back to our hotel instead of use an Uber or taxi. Our walk was a fun way to explore the city. Our route took us through some of the places our group toured with Milan on his Illuminations night tour such as the Latin Quarter and St. Germain. We got a different perspective of these places during the daylight hours. We continued past countless cafes, brasseries, boutiques, small side streets, convenience stores, etc... As usual, the streets were clogged with traffic and the sidewalks were busy. At one point, we came across a street that was lined with shoe stores. We stopped in at least six of them so that Traci could check out the offerings. In the end, she did not buy anything either because the shoes she liked did not fit or because the shoes cost more than she wanted to pay.

Walking Across Town To Return To Our Hotel 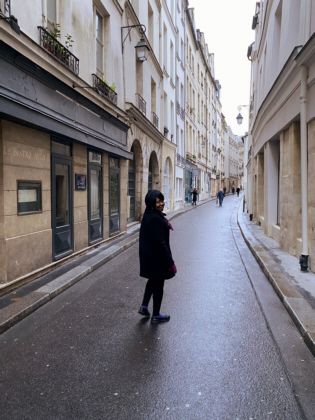 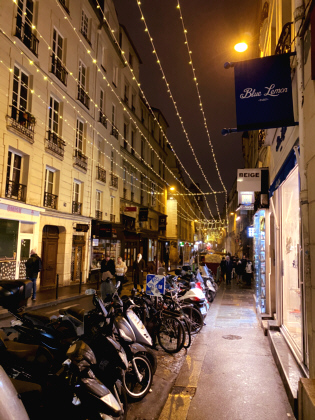 Finally, two hours after deciding to walk, we arrived back at our hotel. We needed to get cleaned up and dressed up for the evening festivities. Today was Kelli’s birthday and we were going to celebrate in style with a dinner cruise on the River Seine. Our group used two Uber vans to get to the dock for our 8:45 PM boarding time. The cruise aboard Le Capitaine Fracasse would allow us to view some of Paris’ famous landmarks and bridges while they are all lit up. There was a card on our dinner table to help identify the landmarks but mostly, we did what we normally do when we are with our friends – talk, laugh, and enjoy each other’s company. 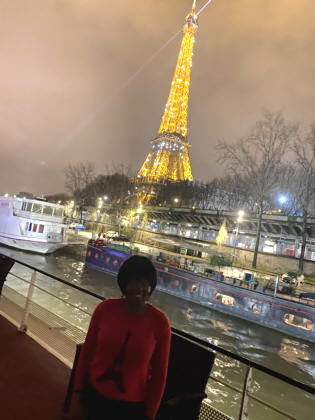 We were served a 3-course meal. Even though I am a picky eater, I decided to be a little adventurous that evening. My first course consisted of a soup, fois gras (goose liver), and what looked to be raw fish topped with caviar. The fish was different than what I am used to but was not bad. I ate the whole thing. The fois gras tasted a lot like cheese. I finished it and the unknown soup. I was proud of myself. The rest of the courses were familiar foods (cooked fish or chicken) and a dessert. 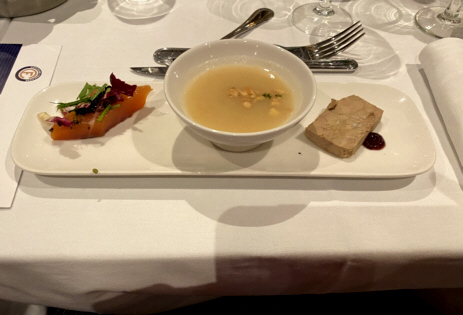 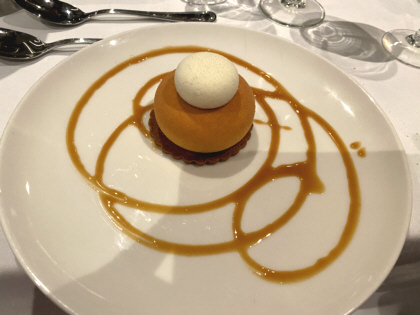 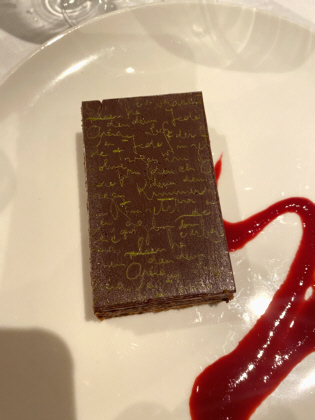 The crew brought out a cheesecake with flaming sparklers for Kelli and then played the Stevie Wonder version of Happy Birthday over the speakers three times in a row. I enjoyed our time aboard Le Capitaine Fracasse.

Arriving back at the hotel, our group still had energy. Most of us went to our favorite hangout – the Royal Cambronne for late-night food or drinks. Traci was too tired to join us. I enjoyed hanging out with friends. I did not return to the room until 2 AM. continue...