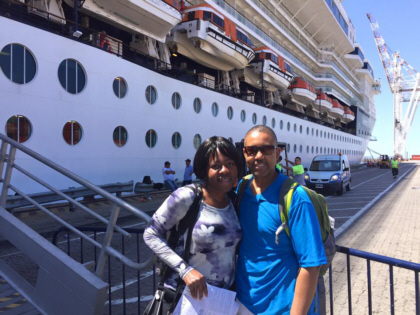 Cruise day! We did not need to be on the ship until 3:30 PM. Therefore, Traci and I hung out in our room at the Hilton Buenos Aires until the noon check-out. As we were leaving the hotel lobby, we had one of those 'what a coincidence' moments. We ran into Traci's friend, Janice, who lives near us at home! Out of all the places in the world we could have been at that moment, we all found ourselves in the lobby of the Hilton Buenos Aires at the same time. Small world! Janice and her husband were returning from a two-week cruise on the same ship we were heading to. They had done the Rio de Janeiro cruise itinerary which allowed them to attend the famous Rio Carnival. Now that their cruise was over, they planned to spend a few days in Buenos Aires before flying home to the States. We chatted for a bit before Traci and I got in one of the taxis outside the hotel.

The 10-minute taxi ride from the Hilton Buenos Aires to the cruise terminal cost 100 pesos (approximately $7 US at the time). Upon arriving at the cruise terminal we were herded through the various booths for check-in. Our passports were collected. We were told that they would be returned at the end of the cruise. The reason we were given for this was that the passports are needed for the security clearance process at some ports. Since we would be arriving at some of these ports very early in the morning, the collection of passports was done as a convenience to the guests so that we would not have to be disturbed at that time to show our passport.

The port in Buenos Aires is not specifically a cruise port. It is mainly a freight shipping port. To get to the pier where our ship was docked, we were driven by shuttle bus from the check-in terminal through a labyrinth of stacked cargo containers, cranes, and other equipment. Finally, we had to walk up the steepest gangway I have ever seen to get to the entrance of our ship - the Celebrity Infinity. 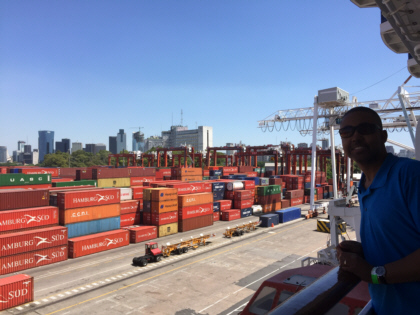 The port at Buenos Aires is a busy freight shipping port. 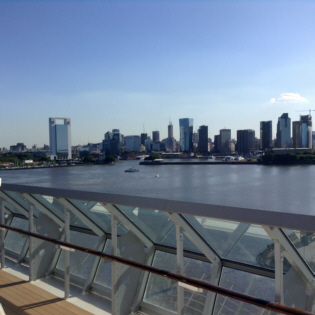 embarking on our 2-week roundtrip cruise from Buenos Aires

The Celebrity Infinity has a passenger capacity of 2,170. The ship was in great condition. Traci and I had a veranda cabin (cabin with a balcony) on Deck 6 which was close to mid-ship. I was pleased with our cabin selection.

I enjoyed the meals on the ship. Traci and I ate almost exclusively in the main dining room because Traci is not fond of buffets. Celebrity implements Select Dining meaning you can be seated anytime during the dining room hours (e.g., no 1st seating, 2nd seating, etc.). There were no assigned tables. We were seated with other guests unless we requested a table for two which we only did if we were in a hurry. There were no formal nights on this cruise. Instead, there were two "Evening Chic" nights that are less dressy. 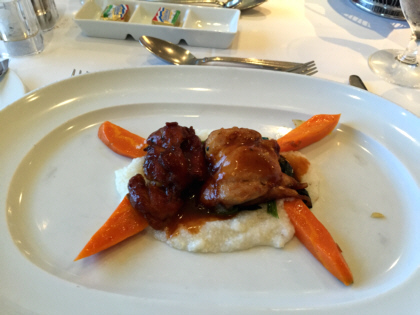 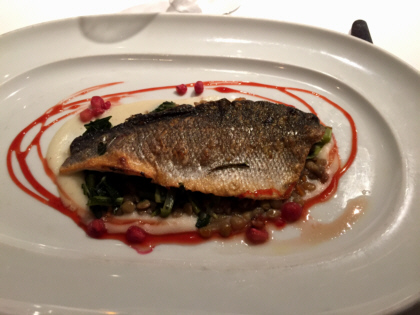 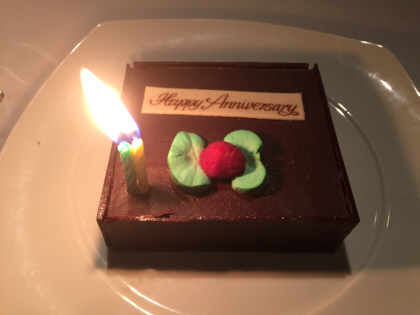 a wedding anniversary gift from Celebrity

We rarely had a meal in the Oceanview Cafe (buffet). The exceptions were to have the daily 3:30 PM scones, to get ice cream, or to get fruit juice from one of the fountains. On mornings that we were in port, we ordered breakfast in our cabin. This was so convenient and efficient. You simply hang your breakfast order card on your cabin door the night before and a server will deliver your meal at the time you specified. They will call a minute or so before they arrive. 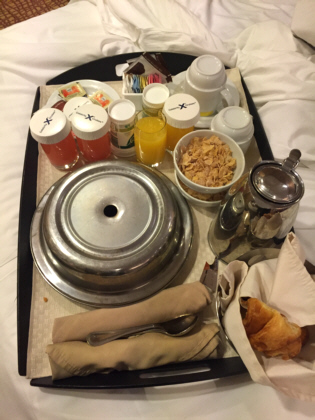 breakfast delivered to our cabin

We did not dine in any of the specialty restaurants. The food in the dining room was fine for us and it was already included in the price of the cruise. We saw no need to pay extra to eat anywhere else. Likewise, we did not purchase a drink package. We generally do not drink alcohol nor do we drink much soda. There were juice fountains in the Oceanview Cafe that were available around the clock. You could get lemonade, fruit punch, guava juice, and other flavors from there at no extra cost. You could also order fruit drinks in the main dining room.

This two-week cruise on the Celebrity Infinity was the longest cruise Traci and I have done to date. Because of the long distances we traveled in that time, our itinerary consisted of mostly sea days. We passed the time by participating in the ship activities. Traci worked out in the fitness center daily until she got sick (more on that later) or when the ship got too rocky. She also enjoyed the adult coloring classes and cooking classes. I enjoyed attending the lectures about our destinations. Additionally, I participated in several daily team trivia competitions. I actually did quite well at these. I gained a reputation around the ship as a strong trivia competitor. 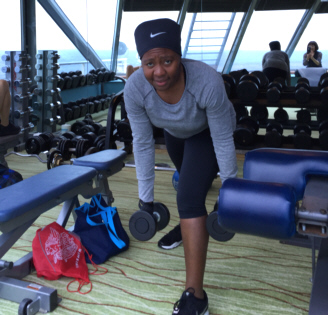 Traci worked out most days. 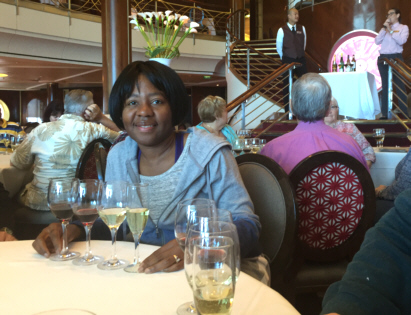 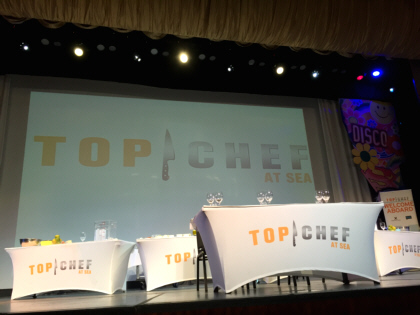 During the warm weather portions of our journey, the pool deck was the place to be. Similar to Caribbean cruises we've done, there was music, the outdoor grill station, contests, pool games, lounging, dance classes, and more. This was obviously not the case while we were cruising near the bottom of South America or Antarctica.

For entertainment, there was a show each evening on the ship. Traci and I were a little worried at first about how we would enjoy them. Most of the cruises we have done have been theme cruises in which an organization rents an entire ship to have a music festival featuring concerts from Grammy winners and legendary musicians each day. Now that we were on a general cruise, we wondered if we would be bored by the shows. I am happy to report that we enjoyed the evening shows. We left early during only one performance.

The majority of the passengers on this cruise were retired seniors. Most of the people we met were from the U.S., Canada, U.K., or Australia. There was also a good representation from Asia and Germany. I heard some French and Spanish occasionally too. The interesting thing about this cruise was that the general announcements were given in English and then immediately in German. However, the announcements in the theater were given in English followed by Spanish. I am not sure how that came to be.

What Traci and I loved most about this cruise was our conversations with our fellow passengers. It was not uncommon for us to spend two hours at meal times chatting with people we had just met. These cruise passengers were travelers who have been to all corners of the globe. Their stories about the places they have been were so inspiring to Traci and me who love to travel. These were people who have done world cruises. I even met a man who has been to Tristan da Cunha, the most remote inhabited island in the world. Look that one up when you get a chance. Not only were Traci and I amazed by where people had been, we were also amazed by how long their vacations tend to be. As I mentioned before, this two-week cruise was the longest we had ever done; however, it was not uncommon to meet people who were doing back-to-back two-week cruises. We even met a few who were doing back-to-back-to-back. Who knows? Maybe Traci and I will do the same one day.

We were not crazy about all the sea days but I guess there is not much that can be done about it given the long distances we traveled. One of the drawbacks of being confined on a ship for so many days is the spread of illness. By the third day, the captain announced that there had been several cases of norovirus diagnosed by the ship doctor. It was also around this time that I started to notice many people had come down with a cold. The crew did an excellent job of controlling the spread of germs and viruses. With the announcement of the norovirus cases, the crew seemed to be wiping down the ship with disinfectant constantly. There were regular reminders, both oral and written, to wash your hands. Crew members stood outside dining halls and lounges with hand sanitizing gel. We were also required to sanitize our hands when re-boarding the ship after a port visit.

This was our first time on Celebrity. Celebrity is a member of the family that includes Royal Caribbean and Azamara Club Cruises. As such, Traci and I were able to use the loyalty points we have accumulated on Royal Caribbean and Azamara. We were categorized as Select status on Celebrity. We soon found out that the offerings at this level were not as generous as what we received on the other cruise lines. Whereas we've gotten free stuff on Royal Caribbean and Azamara, on Celebrity we only received a sheet of discount coupons for various ship services (internet, spa, laundry, etc.). Most were much more expensive than we wanted to pay. For example, we had a coupon for 25% off the $300 internet package. No thanks. We did not use any of the coupons. The only free coupon offering was a scoop of ice cream from the Gelateria on Deck 5. This baffled me because there was free ice cream everyday on Deck 11. We never used the coupon for the Gelateria.

The other thing I noticed about Celebrity was how intentional they are about selling extra stuff. Whether it was an art auction, specialty restaurants, the spa, etc., we were constantly receiving 'junk mail' in our cabin. During the second week of the cruise, the dining room hostess would try to persuade us to give a specialty restaurant a try. These sales pitches and advertisements were not high pressure. We would simply say "no thanks" and keep it moving.

Overall, I was pleased with my experience on the Celebrity Infinity. The food was good. The crew was exceptional. They were friendly and willing to do whatever it took to make our voyage enjoyable. And now, on to the ports and sightseeing destinations Continue...