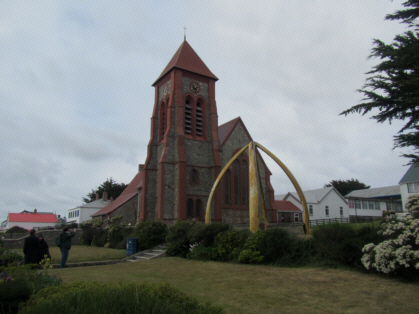 Hooray! Land again! We had not stepped on land since Thursday. It was now Wednesday morning and I was starting to get excited about the prospect of going to shore in the Falkland Islands. I knew not to get my hopes up too high because in this part of the world, the weather conditions can change rapidly. As a result, many cruise ships end up having to skip the Falkland Islands.

Ships usually anchor and passengers have to be tendered ashore because the port at Stanley (capital city) is too small for most ships to dock. With tender tickets in hand, Traci and I, along with other passengers, waited in the Rendezvous Lounge for our group number to be called. Finally, after waiting more than an hour, our number was called to board the tender. Thirty minutes later we were stepping ashore in Stanley.

It was an overcast, cold, damp morning. This was pretty much what I expected. Actually, I thought it would be more windy - not complaining. Nonetheless, we were prepared with layers that included winter jacket, hat, and gloves - and to think, this is summertime for the Falklands! Although I could not see myself living there, I am fascinated by people who live in such isolated, harsh places.

The Falkland Islands (a.k.a. Malvinas) are located in the South Atlantic Ocean off the coast of Argentina. Argentina and Britain went to war over the islands in 1982. Britain won and thus the Falklands are British territory. This was evident by the British flag that greets you as you exit the pier. I thought it was interesting that we encountered several of the classic red phone booths that were commonplace all over the United Kingdom before mobile phones. These days, they tend to be photo opportunities. I entered one of these red phone booths in Stanley so that Traci could take a picture of me. I was surprised to learn that that particular booth was not just for show. It actually had a working phone. 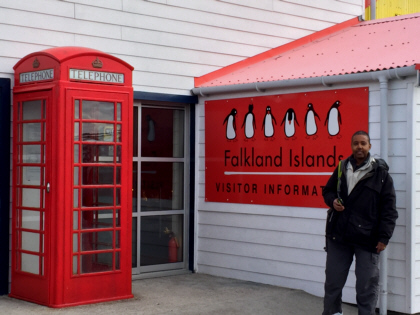 dressed for summertime in the Falkland Islands

The locals speak with a British accent but still different enough from parts of the U.K. I've visited. The currency is the British Pound but the tourist establishments we visited also accepted U.S. dollars in addition to credit cards. The men of the island had a rugged look to them. The locals seemed more reserved than the locals we encountered at our other ports. For example, in Argentina and Uruguay, shopkeepers greeted us with a friendly "Hola!" ("Hi") when we entered their shop. In Stanley, on the other hand, the shopkeepers tended to continue whatever they were in the process of doing instead of greeting us. However, if we asked a question, they seemed more than willing to help.

Just across the street from the pier is the Visitor Information Center where you can pick up a free map of Stanley, brochures, souvenirs, and access Wi-Fi. On one of the back walls is a succinct but informative timeline of the history of Falkland Islands. While in the visitor center, Traci and I paid for Wi-Fi (Ł5 or $8 for 50 minutes) so that we could check e-mail. Wi-Fi at ports is a big draw for cruise ship passengers since many of us choose not to pay for the expensive and slow Wi-Fi the ships offer.

The Falkland Islands are known for their diverse penguin colonies. At least five species can be found there - Magellanic, Gentoo, Macaroni, Rockhoppers, and the highly sought-after King penguins which stand up to 3 feet tall. Most of the shore excursions take passengers in land rovers over the rugged island terrain to see these penguin colonies. Knowing this, I had planned for the Falkland Islands to be our penguin-viewing port. Unfortunately, I waited too late to book our shore excursion. Most of those sold out two months before the cruise. There are just not enough vehicles on the island to accommodate a shipload of passengers. In fact, there are only about 2,800 permanent residents on the Falkland Islands. With 2,100 passengers plus about 1,000 crew members, the number of people on our ship outnumbered the people living on the island.

Although we were not able to book an excursion, Traci and I were able to take advantage of the shuttle to nearby Gypsy Cove. These shuttles cost $20 per person roundtrip and left every 20 minutes or so from the Visitor Information Center for the 4.5-mile trip to Gypsy Cove.

As we rode outside of the small town of Stanley, we could see how barren the Falklands are. There are no trees - just rolling hills of rocks and low-lying vegetation. We passed by a body of water where there was the hull of a shipwreck. This was one of many shipwrecks that can be found around the Falklands. We eventually turned off the paved road and onto a dirt road leading to Gypsy Cove. 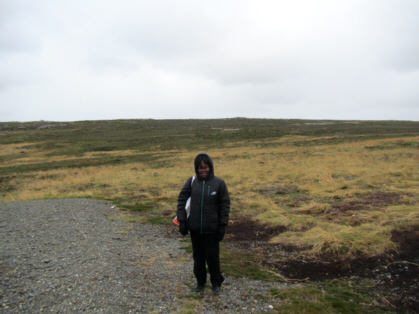 treeless landscape of the Falkland Islands

At Gypsy Cove, we were free to walk the gravel pathway. It was very important that we did not wander off the path. During the 1982 war, landmines were buried all over the islands. Only a small percentage of these have been cleared to date. Teams of landmine experts from Zimbabwe come to the Falklands to clear the mines. Gypsy Cove is believed to be cleared; however, along the path there are barbed wire fences containing signs warning of the potential danger. This whole situation had me slightly nervous. 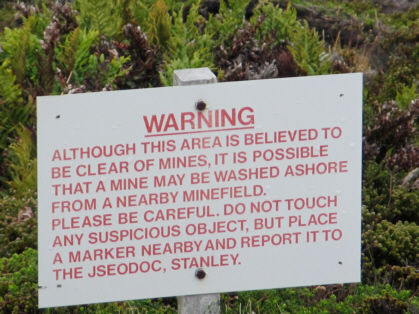 Danger! Landmines! Stay on the path!

The path overlooks a crescent-shaped white-sand beach lapped by clear light-blue water. Looking at it, you might think you were at a tropical location. This was far from reality. It was cold and windy weather during our visit. On the beach were huddled 50 or so Magellanic penguins. They were a good distance from us. I needed to use binoculars to observe them. However, one of the penguins came rather close to us after it climbed the hill to get to its burrow. It seemed to have no interest in us gawking tourists as it walked in and out of its shelter several times. 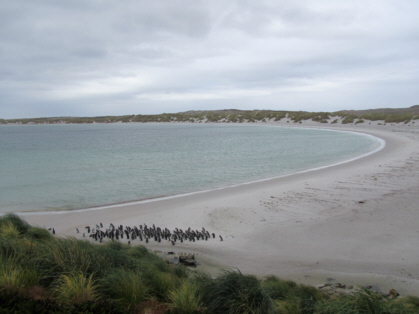 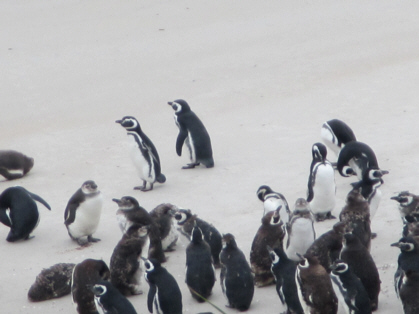 Magellanic penguins on the beach 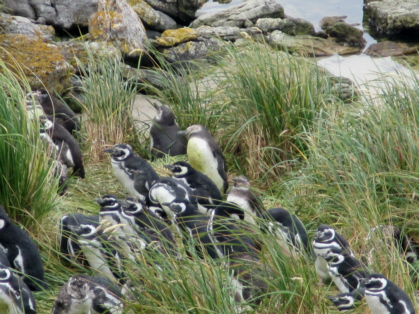 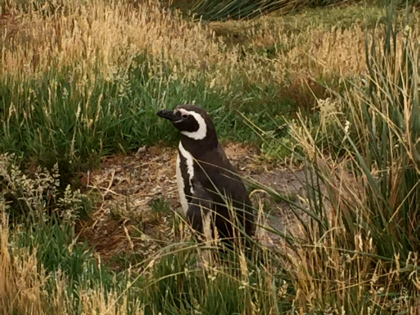 We came across another burrow which was close to the path. The tourist board had actually placed temporary steps near it so that we could climb over the barbed-wire fence for a closer look. I could see a penguin's feet and the bottom of its partially extended wings. However, I have to agree with Traci who said the penguin looked fake. I looked in the burrow for several minutes and the bird never moved a muscle. Real or fake? I won't know for sure.

Other interesting experiences of our Gypsy Cove visit were seeing some Commerson's dolphins surfacing in the cove. Their dorsal fins made them look like sharks at first glance. Besides animal sightings, I was intrigued by a bush that produces small red berries called diddle-dee. These shrubby plants grow in abundance in the wilds of this rugged land. What had me so interested was when I overheard a tour guide telling a group that Falkland Islanders make diddle-dee jam from the berries. At that point, I decided I had to purchase some of this jam before I left the island. 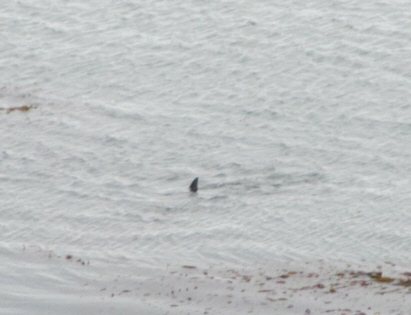 Nope, it's not a shark. It's a Commerson's dolphin. 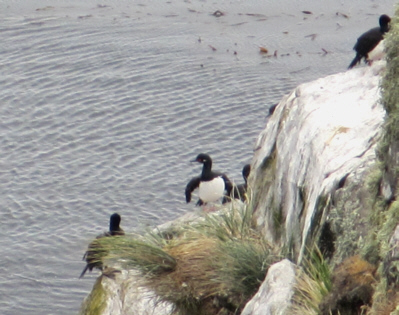 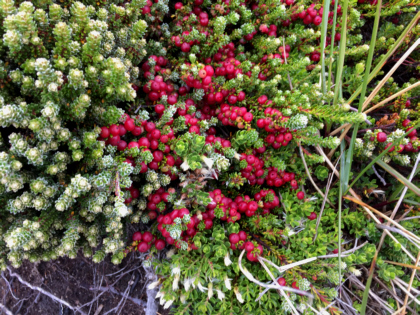 Traci and I spent around 45 minutes at Gypsy Cove before we went to wait for the next shuttle back to town. The shuttle arrived just in time. It was starting to rain.

The rain had ended by the time we arrived back in town. The streets were full of people from our ship. We spent the rest of our time exploring Stanley on foot. It is probably the smallest capital city I have ever visited. We saw most of it within an hour.

We made a stop at Christ Church Cathedral where a whalebone arch structure stands outside the church. We later had a look around in a grocery store. I was on the hunt for some unique snacks. Surprisingly, I saw a number of India-inspired snacks but did not find anything I wanted to try. Traci was shopping for Mucinex or some other medicine that would relieve her of the congestion she was dealing with as a result of her allergy or possibly the cold that was making its rounds on the ship. She ended up buying Sudafed which did the trick for her.

During our walk, the sun actually made an appearance for a while and warmed us up quite nicely. We came across several monuments. Some were war memorials. Others were to commemorate visits from political figures such as Margaret Thatcher. We walked by the city's museum complex, which was a highly recommended attraction, but we were not in the mood to browse museum exhibits so we kept walking.

We made a detour through the residential area. These were cottage-style houses - many with impressive vegetable gardens. Just about every house had a land rover parked in front of it. This type of vehicle is needed to negotiate the rugged terrain outside of Stanley.

A Stroll Through Stanley 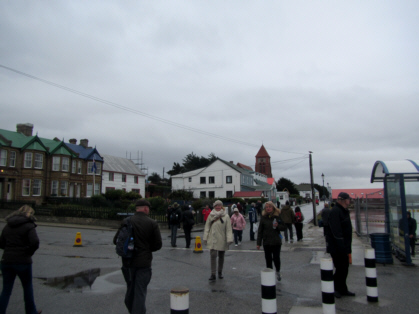 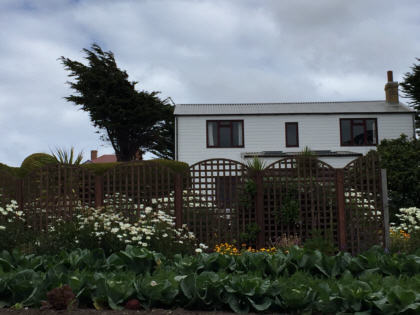 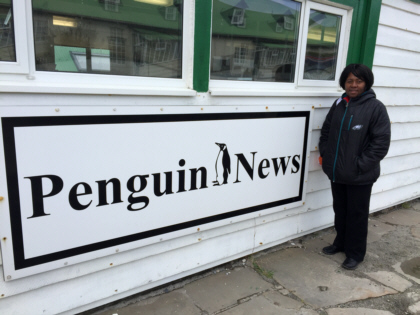 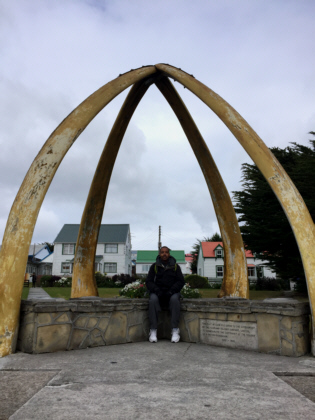 Approaching the port, we came across a few souvenir shops. There were a lot of penguin-themed items and wool items being sold. We eventually bought a refrigerator magnet for our collection and a jar of diddle-dee jam. I tried the jam when I got home. To me, it tastes similar to a sweet cherry spread but with tiny crunchy seeds and a hint of bitterness.

Traci and I finished off our day in the Falklands by sharing a plate of delicious fish & chips (and peas - Yuck! I don't like peas) at the Globe Tavern. We normally do not buy meals when we are in port because all of our meals are already included on the ship. However, we were hungry and pub grub just seemed like a nice way to end our day on this British island.

There was a long line to board the tender boats back to the ship but it moved rather quickly. The Celebrity crew members handed out cups of delicious hot chocolate while we stood in line.

I watched our departure from the Falklands from our cabin balcony. Using my binoculars, I observed large colonies of penguins along the shore of the island. I saw many more penguins during this time than we saw at Gypsy Cove.

I had enjoyed my day in the Falkland Islands. It felt so good to breathe fresh air and walk on solid ground again. We had two more sea days before we would reach land again. At least, we could put away our winter gear. Our next port, Montevideo, would be the summertime weather I'm used to. Continue...