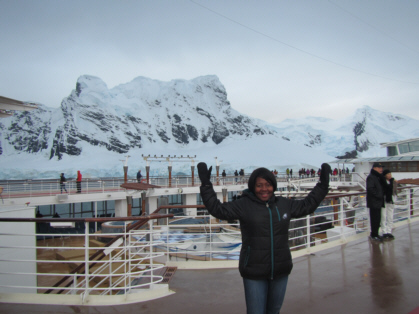 It was a one-day journey across the notorius Drake Passage to the Antarctic Peninsula. Fortunately, our Drake crossing was not too bad. It was not quite a 'Drake Lake' but it was not the roughest water I have ever experienced on a cruise.

The Celebrity Infinity is not an ice breaker ship. In fact, there was an ice pilot onboard whose job is to monitor the wind, currents, icebergs, and any other factors to make sure our ship stays at a safe distance from any ice floes or icebergs that could cause damage to the hull.

I left our cabin curtain open in hopes of spotting icebergs. Seeing them would be an indicator that we were finally getting close to the white continent. We were not scheduled to arrive in Schollart Channel, Antartica until 11 AM. We pretty much held to this schedule. Around 10:30 AM, I looked out of our balcony door and saw my first iceberg of this trip! Shortly after, I began to see groups of penguins darting in and out of the water at lightning speed as they swam. I then saw whales surfacing and blowing water out of their blowholes. Keep in mind, however, that this was no National Geographic show or wildlife documentary. The animals I saw were far away. You could not see much detail without binoculars or the zoom of your camera. Furthermore, you had to be really quick to spot an animal. They were definitely not hanging around to pose for pictures. 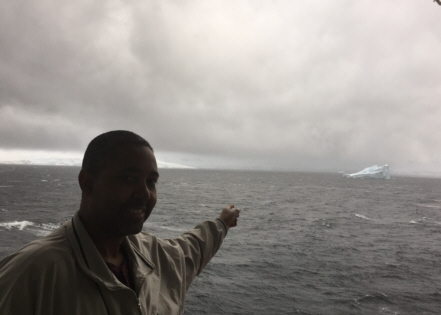 "An iceberg! We must be getting close!" 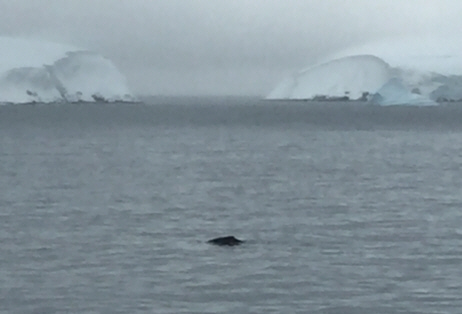 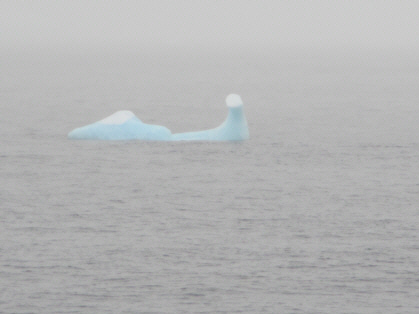 This iceberg reminded me of the Loch Ness Monster.

I began to see snow-covered land and islands. I've heard people who have been to Antarctica describe it as a land of black and white. You see the white snow everywhere with an occasional exposure of bare land which appears black. While I agree with the black and white description of Antarctica, I cannot ignore the shades of gray. The sky was gray. The water was milky-gray. The whales that briefly surfaced were dark gray.

I spent time viewing the scenery from our balcony and then from the pool deck with many other passengers. It was snowing lightly. I enjoyed watching the excitement of passengers and crew who were seeing snow for the first time in their lives.

To provide insight to our Antarctica sightseeing, the ship lecturers provided commentary over the PA system. Their commentary could also be heard on the Navigation Channel of our TV in our ship cabin.

By 2 PM, we were entering Paradise Bay, Antarctica. This is a bay surrounded by scenic snowy peaks. It was hard to get an idea of just how big the land masses are until we saw one of the expedition ships close to the shore. We needed binoculars to see it at the foot of the tall mountains. We spent 3.5 hours in Paradise Bay. The captain rotated the ship a few times to give everyone a chance to take in the scenery. I did not spot any wildlife in Paradise Bay. Traci and I enjoyed photographing the scenery from the icy cold pool deck. It was at this time that Traci started regretting that we did not book an expedition cruise that would allow us to go ashore. She is now determined to come back to Antarctica so that she can set foot on the continent. She has already designated 2019 as the year we will make this happen.

Our journey continued through Gerlache Straight, Antarctica. I got glimpses of icebergs and more snow-covered land from the windows in the dining room.

Even though it was the Antarctic summer, the days were not as long as I thought they would be. For example, during my summertime visits to places in the far north like Alaska and Greenland, we experienced 20 to 24 hours per day of sunlight. Conversely, our Antarctica cruise did not go far enough south to experience these type of extended daylight hours. It was normally dark by 10 PM. I also was not able to see the southern lights (aurora australis). This light display phenomenon is usually visible in the skies over the New Zealand side of Antarctica. 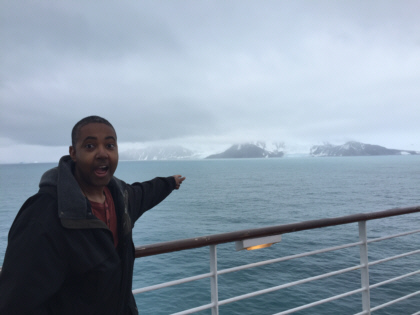 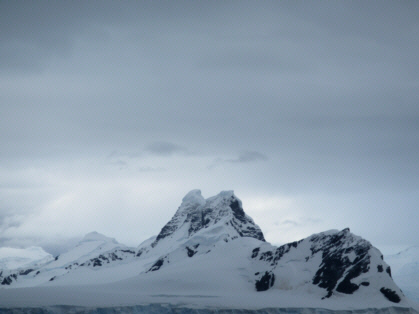 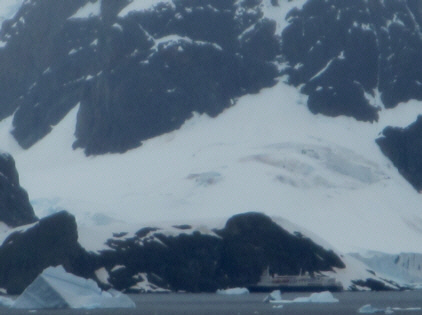 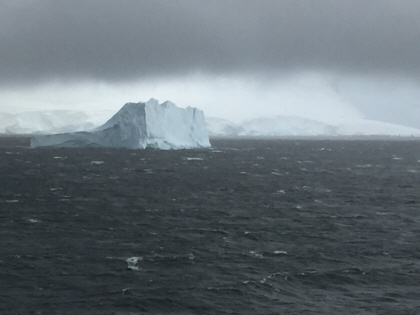 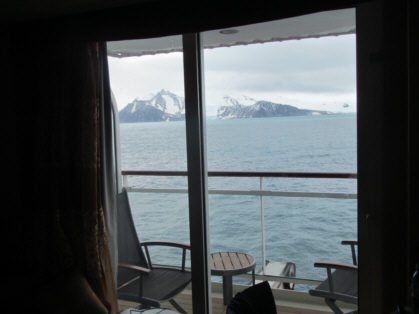 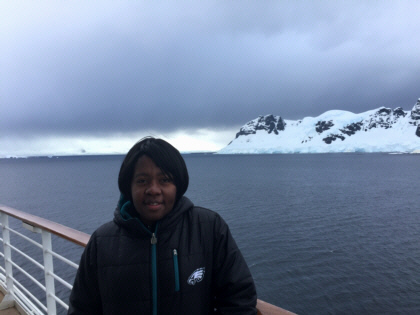 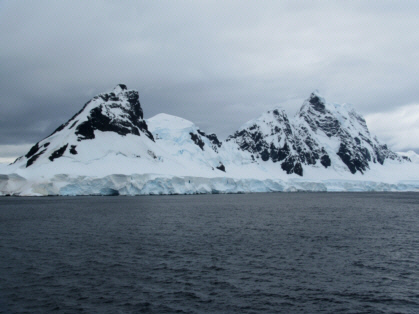 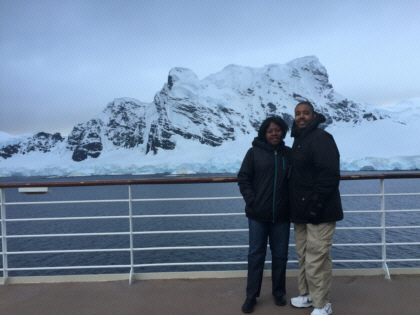 The next day, we arrived at Elephant Island, Antarctica. Although the island is visually impressive, its story is epic. Elephant Island is where Ernest Shackleton and his explorers found themselves stranded for several months in 1915 after their ship got stuck in an ice floe. There was no way for them to radio for help in those days, so Shackleton took five of his men with him in a row boat and went on an 700-mile journey across the unforgiving Drake Passage to reach South Georgia Island. They hiked over a mountain to reach a whaling station. Even then, it took 4 months to get a rescue ship to Elephant Island to rescue the 22 stranded men. Even though the men had been stranded for over a year, all had survived the harsh conditions. It is one of the greatest survival stories in history.

It was during our time at Elephant Island that an announcement came from the captain that we too were stranded - sort of. This was no where near the magnitude of the situation Shackleton and his explorers found themselves in over a hundred years ago. After all, we were on a warm, luxurious cruise ship with food available around the clock. (Well, we did run out of lettuce that week but I don't like lettuce so this did not bother me one bit.) The nature of our delay was a storm that had developed in the Drake Passage. With 25-foot waves and a sustained wind speed of 50 m.p.h., the captain feared we would experience an "uncomfortable" voyage if we attempted to cross the Drake in those conditions. Therefore, he informed us that we would remain in Antarctica for an extra day. Consequently, we would have to cancel our scheduled stop in Puerto Madryn, Argentina - safety first.

As consolation for our missed port, the captain decided to take us to Deception Island, Antarctica. It is volcano caldera. There are natural hot springs there. Additionally, the wildlife viewing was supposed to be very good. Unfortunately, the whole area was covered in a thick fog when we arrived. We saw nothing - no island, no wildlife, no nothin'. I guess you can say Deception Island deceived us. It was not a great day for us. Traci's allergy/cold symptoms had her down for the count. I was starting to get a scratchy throat. We were losing our television signal more frequently. The fog eventually lifted slightly to reveal some icebergs and the bottom of the island but by that time, we were beginning our journey north. 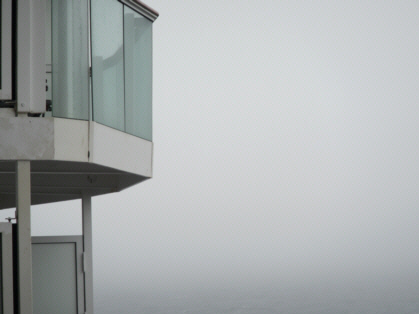 too foggy to see Deception Island 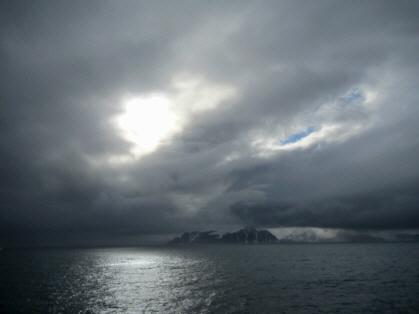 Our return crossing of the Drake was a rough one. I am assuming this was due to us catching the tail end of the storm that caused us to spend an extra day sheltered behind islands in Antarctica. Our ship pitched and rolled all day and all night. Barriers and warning signs were placed in front of doors to prevent passengers from going to the outside portions of the decks. With all the ship movement, walking became difficult at times. When I started to feel queasy, I took a half of a Dramamine tablet and then napped for about an hour. I felt much better when I awoke. I'm sure things could have been much worse if it were not for the ship's stabilizers. That night as I lay in bed, I felt like I was on a giant pendulum that swung slowly from side to side. Incredibly, nothing fell over in our cabin despite all the ship movement. Continue...