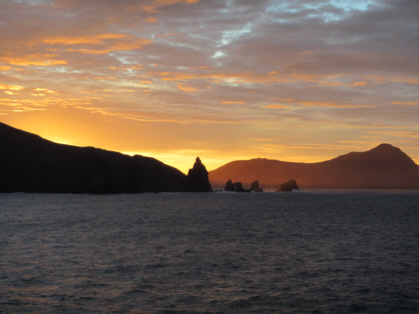 We were up by 6 AM to see Cape Horn, Chile. It is the southern tip of the South America continent. I was not expecting to see much more than a land mass but Cape Horn turned out to be a beautiful and memorable experience.

I opened the curtain of our cabin balcony and was wowed by the sight of a rocky island. I am not sure why I found this so spectacular but I immediately called Traci over to the window to take a look. Then it began to sink in that I was actually looking at the bottom tip of South America. I looked at the Navigation Channel on our television to confirm. The experience kept getting better. We were treated to a glorious sunrise that cast wonderful hues on the land and the clouds. We had been lucky with the weather thus far on this cruise. The water was relatively calm and there was no precipitation. 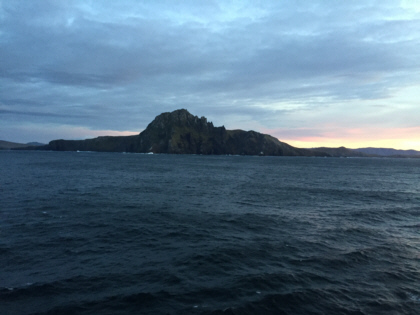 my first view of Cape Horn

Our starboard side balcony was perfect for viewing the Cape. Despite this, I still went up to the Pool Deck to check out the view from there. It was cold and windy up there. There was a crowd of people taking photos. The crew handed out hot chocolate to help warm us up a little. 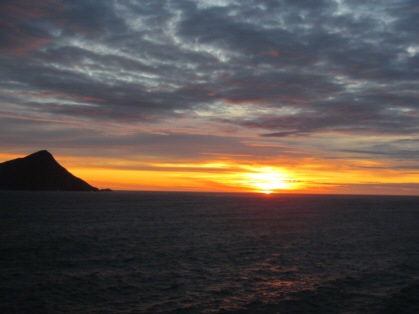 watching the sunrise from the bottom of South America 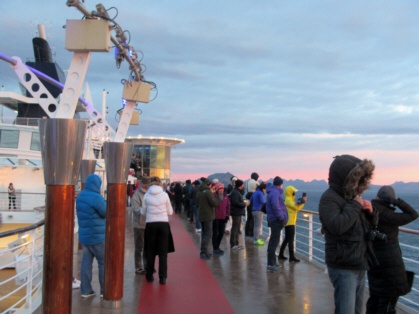 a chilly morning on deck

The captain rotated the ship several times so that everyone could experience Cape Horn. Because it was a clear day, we were able to see the Cape Horn Lighthouse. We were told that a Chilean naval officer actually lives there with his family. Not far from the lighthouse was the Albatross Monument. Before the Panama Canal was constructed, ships had to go all the way around South America past Cape Horn to travel between the Atlantic and Pacific oceans. The water near the Cape is notoriously violent. The Albatross Monument is a memorial to all the sailors who lost their lives in these treacherous seas. 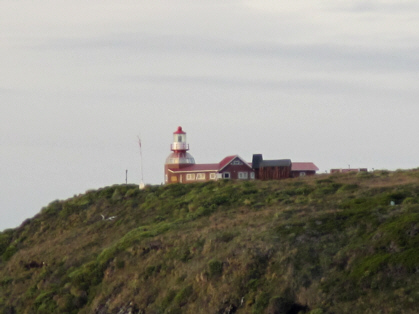 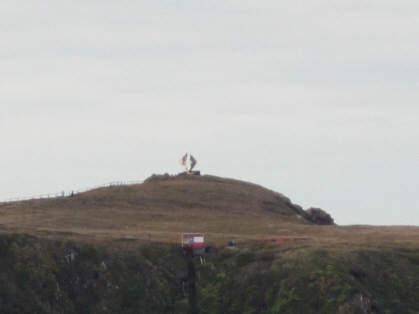 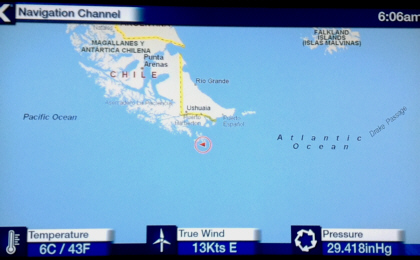 monitoring our location on our cabin TV

We spent about two hours floating and rotating on the waters of Cape Horn before moving on. Our next destination was what everyone on this cruise was looking forward to - Antarctica! But first, we would need to cross the Drake Passage. The Drake Passage is the infamous body of water between South America and the Antarctic Peninsula. The conditions of the Drake are often stormy and rough seas. The strong winds here are referred to as the "Roaring Forties". I knew about the Drake when I booked the cruise and I was aware that there was a chance that the captain could choose to cancel the Antarctica portion of this voyage if the conditions got too bad. If our crossing of the Drake Passage is calm then the passage is referred to as the Drake Lake. If we have a rough crossing then it is referred to as the Drake Shakes. I was really hoping we would make it to Antarctica but I would understand if it did not happen due to safety concerns. Continue...