Traci and I finally did the Southwest U.S. vacation we'd been talking about doing for years. The trip was loosely based on a AAA DriveAmerica package I saw when we were originally supposed to do this vacation back in 2004. The package is no longer offered. Therefore, I did some online research to put together our own version of a Southwest road trip. I had great time comparing prices and estimating mileage. In the end, we decided to fly to San Diego California and then fly to New Mexico where we'd do a week long road trip that included northern New Mexico and southern Colorado before flying back home. Our itinerary is summarized below: 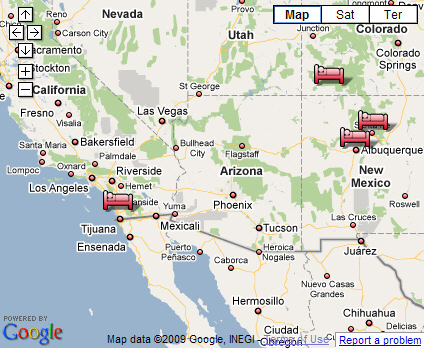 Traci and I had a fantastic time on this vacation. In general, we felt we spent the right amount of time in each location to see what we wanted to see. The trip was a pleasant mix of magnificent scenery, history, culture, and shopping.

In and Around Santa Fe:

In and Around Durango:

In and Around Santa Fe:

In and Around Durango:

And now, the trip report...