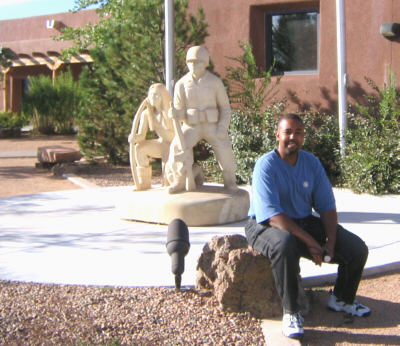 Saturday was our last full day of vacation. For the first time, it was warm enough to wear shorts but we had already left out in jeans. We spent the morning in Old Town. Like the plazas in Santa Fe and Taos, Old Town is a touristy plaza with shops, historic churches, and museums. Once again, we were incredibly lucky with parking. I found a free parking spot in the middle of the plaza.

Although similar to other plazas we visited during the week, Old Town had more of a Spanish feel to it. Additionally, there was actually some merchandise in the stores that we had not seen anywhere else during our trip. At this point in the vacation, I was totally burned out with the shopping scene. I let Traci do her thing while I found a seat at a terrace and listened to some guys play Celine Dion songs on pan flutes. I know this doesn't sound very entertaining but they were actually pretty good. I later moseyed over to the central plaza to watch an excellent mariachi band perform. Traci later called me on the cell phone and we met back at the car. She had had another successful day of shopping. 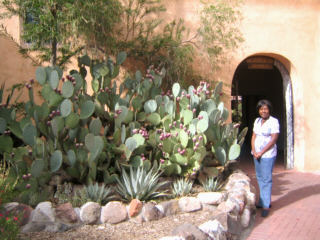 Since it was our last day of vacation, we wanted to celebrate with dinner at the High Finance Restaurant. This restaurant sits at the top of the Sandia Peak Mountain at an altitude of 10,378 feet. To get there, you have to take a 2.7-mile ride on the Sandia Peak Tramway, the longest ariel tram ride in the world.

We had planned to arrive an hour or so before our dinner reservation to give us a chance to walk around the observation area before dark. Unfortunately, we received some disappointing news when we arrived for our tram ride. The Sandia Peak Tramway and, consequently, the High Finance Restaurant were closed that day due to high winds. Darn! Shortly after receiving the news, Traci received a call on her cell phone from the restaurant asking if we wanted to reschedule our reservation for the next day. However, that was not possible since we were flying home the next day.

Oh well, there is a restaurant called Sandiago's Mexican Grill at the base of the mountain that serves Mexican and New Mexican cuisine. Traci and I decided to give it a try to at least say we had a New Mexican meal while in the state. I ordered the blue corn enchiladas stuffed with beef. It wasn't very good but my side of rice and side of beans were great. Traci said her fish tacos were so-so. I guess this was the sign that our vacation fun had run out.

We went back to the hotel to pack up, but before we started to stuff suitcases we decided to throw on our bathing suits and take advantage of the indoor pool. The pool water was way too cold so we spent most of our time in the Jacuzzi hot tub next to the pool. The water felt great. It was a very nice ending to a fast-paced 11-day vacation.

We checked out of the Homewood Suites very early Sunday morning to make our 7:30 AM flight to Philadelphia. Getting to the plane was quite an ordeal. I missed the exit to the airport and was headed towards the desert before I found somewhere to turn around. We had to re-pack our suitcases at the check-in counter because they were each over 50 lbs. Fortunately, Traci always carries an empty duffle bag in case this situation arises. We were almost ready to board our flight when Traci realized she didn't have her cell phone. She decided to take a chance on going back to the check-in counter to look for it. I stayed behind to make the flight attendants aware of the situation in case it took Traci a while to make it through the long security line again. Traci made it back before the gate closed but unfortunately with no cell phone. It's a shame this great vacation had to end this way.

Despite the mishaps with The Navi and Traci's cell phone, this vacation did have a happy ending. It was just delayed by a few days. I had given Traci my cell phone to use until she found out what to do about her missing one. The day after vacation, she received a phone call from Avis Rental Car in Albuquerque letting her know they found her cell phone in the rental car we turned in. They overnighted it. By the next day, Traci was good to go.

As for The Navi, I called the Garmin GPS tech support number and explained the problem. They told me there was a software glitch in the model of our navigation system (Garmin StreetPilot C530) that causes the unit to lock up. The technician told me to let the battery run down and then plug it into the USB port of my home computer. This would power up the unit and allow me to download the software fix to the unit. This all worked smoothly and we've had no problems with The Navi since. By Wednesday, I could finally say we had a great vacation. Main Page...