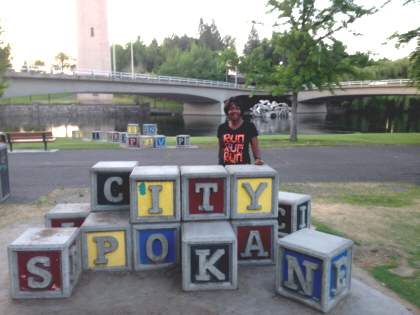 Since there were no direct flights from D.C. to Spokane, Traci and I had a long 9-hour travel day which included a 3-hour layover in Denver. I had never been to Denver but I imagined a city known as the "Mile-High City" would have a more mountainous landscape. Instead, I only saw flat farmland from my window as our plane descended for its landing. It was a 1.5-hour flight between Denver and Spokane. We landed in Spokane around midnight which was equivalent to 3 AM East Coast time. Needless to say, Traci and I were tired.

Our lodging for the weekend was the DoubleTree Spokane City Center hotel. It was a convenient and accommodating hotel. It provides complimentary airport shuttle service but when Traci called them for our pick-up, she was told the shuttle was not available. No worries. The hotel told us to take a taxi and they would pay for it - which they did. We were welcomed with three large gooey chocolate chip cookies during check-in. Scrumptious!

The Windermere Marathon would not occur until Sunday; therefore, we had Saturday to hang out with friends from the running group and to explore downtown Spokane. We had a room on the 15th floor that had a view of the city and the surrounding green mountains. Downtown Spokane is not a city of skyscrapers. It consists of brick buildings that look like they have been around for a while. Very long freight trains roll through the city. In fact, this was one of the concerns of the race officials. Race marshals were placed at the railroad crossing on the race course to record the times of runners delayed by a train. Their time would be adjusted accordingly.

The city is very clean and eco-minded. There was always at least one recycling bin next to every trash can we saw. This was generally the case anywhere we went in the state of Washington. Almost no one J-walks in the city. People cross the streets at the crosswalks even if there is not much traffic. Traci and I got a kick out of the crosswalk button the first time I pushed one. I wasn't expecting an automated voice to yell a quick commanding, "Wait!" The voice then began a countdown until the walk signal appeared across the street.

Spokane from Our Hotel Room 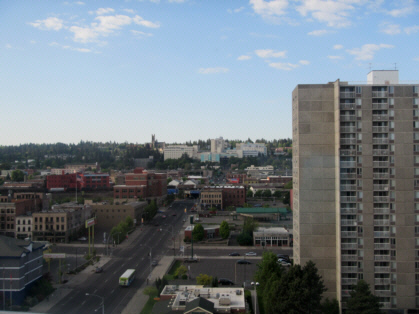 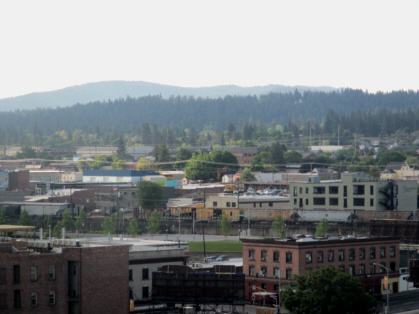 I accompanied Traci as she went to the runners expo at the Convention Center to pick up her race packet. The Convention Center was conveniently attached to the DoubleTree. We ran into friends at the expo and made plans to catch up over lunch even though we were still full from the breakfast buffet. It was during our walk to the restaurant that we caught a glimpse of Spokane's major gem - Riverfront Park. I normally do not get excited about a city park but this one was really eye-catching for people of all ages. The trails, beautiful trees, pedestrian bridges, sculptures, rides, snack stands, and everything else had us captivated as we walked by. Riverfront Park was the site of the Expo '74 World's Fair in 1974. However, what had us oohing and awwing is when we turned the corner and saw the large powerful waterfalls of the Spokane River. We could hear the roar and see the spray as the river gushed through the park. 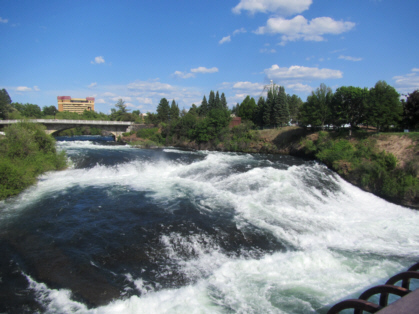 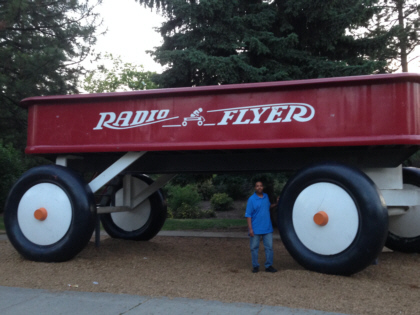 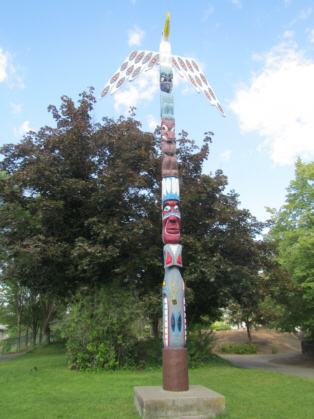 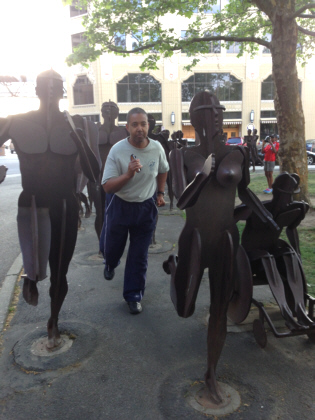 The hotels and restaurants in the area take advantage of their location by offering patrons views of the falls. One such establishment was our lunch spot for the day - Anthony's seafood restaurant. It has an outdoor dining patio that overlooks the falls. Although it was a beautiful day, we chose to dine inside next to a large window that had a nice view of the river.

Traci and I were still full from breakfast; therefore, I just ordered clam chowder in a bread bowl. Traci ate the salad that came with it. The clam chowder was great. I finished it and the sourdough bread bowl. I don't think there was even a crumb left on my plate. I washed the meal down with a glass of huckleberry lemonade. The huckleberries floating in the lemonade seemed to sweeten the drink. Huckleberry products are popular in this part of the country - especially in the souvenir shops.

After lunch, Traci and I set off to explore Riverfront Park by walking its trails and crossing the bridges over the falls. We were mesmerized by the sound and the power of the mighty river. We came across a beautiful outdoor wedding that used the falls as the backdrop. It was a lovely day. A bizarre thing I noticed when walking in the park was all the fuzz balls floating in the air. I never did figure out which tree or plant was producing them. It was nice to be out wandering but we needed to make our way back to the hotel. It was almost time to eat again.

The running club was meeting for dinner at Luigi's Italian restaurant for the ritual pasta dinner. Distance runners often carb-load the evening before a long run to fuel their bodies. Pasta is a source of carbohydrates. Luigi's was only two blocks from our hotel. The food was very good. I carb-loaded along with the rest of the group even though I am not a runner. I knew all this good eating would cause me to gain a few pounds but this trip was a vacation for me.

Thanks to Traci's sweet tooth, she and I explored more of downtown Spokane after dinner in search of a cupcake or a slice of cake. In the process of doing this, we found the shopping mall (River Park Square). It was closed when we arrived but a bunch of the restaurants were still open. We went from restaurant to restaurant reading dessert menus but were not able to find the right dessert for her craving. After all the searching, our dessert for the evening ended up being one of the delicious complimentary cookies at our hotel. 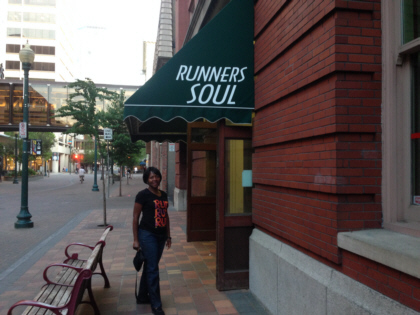 found a running store while looking for dessert

Sunday was race day and we had to be up early so that Traci could meet the group for a pre-race group photo at 5:30 AM. Our alarm clock sounded at 4:30 AM. The interesting thing about being in Washington state at this time of year is the long daylight hours. There was already daylight at 4:30 AM. Darkness did not occur until almost 10 PM. The weather throughout our 10 days in Washington was very consistent. The mornings were cool and overcast - typically upper 40's/lower 50's Fahrenheit. The clouds would burn off by the afternoon and the temperature would shoot up to the upper 70's/low 80's. The day of the race fit the pattern with a morning temperature of 49°F and an afternoon high of 84°F.

Traci ran the half-marathon (13.1 miles). She has run full-marathons (26.2 miles) in the past but knowing the toll they can take on the body, she decided to do the half so that she could enjoy our vacation afterwards without feeling too shattered. By no means is 13.1 miles anything to sneeze at though. I was proud of her as she came across the finish line in Riverfront Park. She was smiling and looking good. She said the course was beautiful. We found out later that she had placed first her age group amongst the members of her runners club. Yay, Traci! 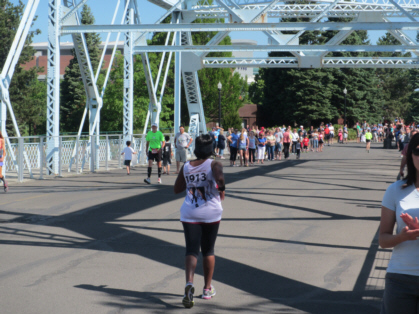 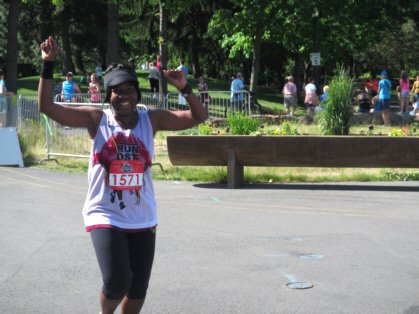 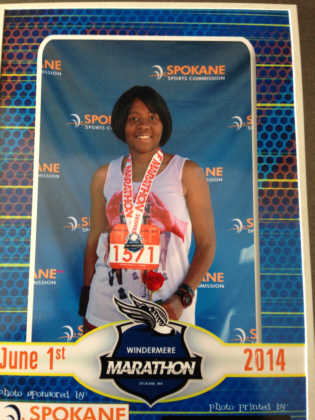 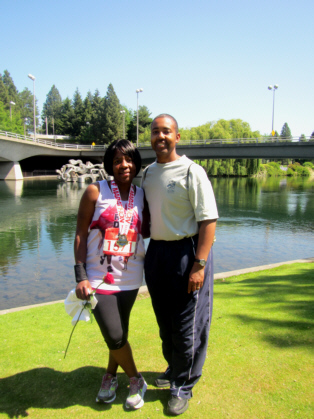 Later that afternoon, Traci and I had lunch with our friends Charlotte from Georgia and Tony and Deborah (Tony's wife) from Texas. We always look forward to hanging out with them somewhere around the world at least once per year when Traci runs with the running club. Like Traci, Deborah did the half-marathon this time. Tony and Charlotte did the full. Charlotte has done over 20 marathons in cities around the globe. The Windermere Marathon was Tony's 126th marathon. He has run marathons in all 50 states and on all seven continents (Yes, there is such a thing as an Antarctica Marathon). In fact, he holds the distinction of being the first black man to run a marathon on all seven continents. With all their running and travel experiences, our friends always have exciting stories to share. Traci and I had good time catching up with them.

After lunch, Charlotte and Deborah joined Traci and me for a ride on the Spokane Falls Skyride. We had been eyeing it since we walked past it the previous day. I used my AAA card for discount tickets. The skyride does a round-trip above the falls. It was beautiful. We could even see a rainbow in the mist. I was really impressed with Spokane's Riverfront Park. We walked along more of the park trails after our sky ride. I was amazed that despite all the running everyone had done that day, they still had the energy to do these walks. 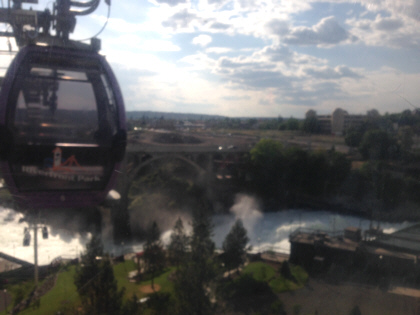 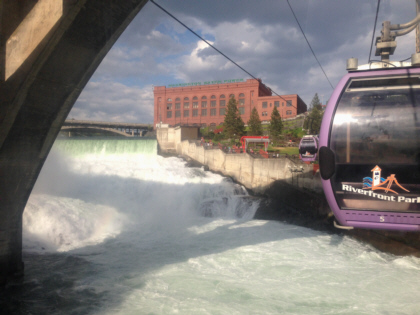 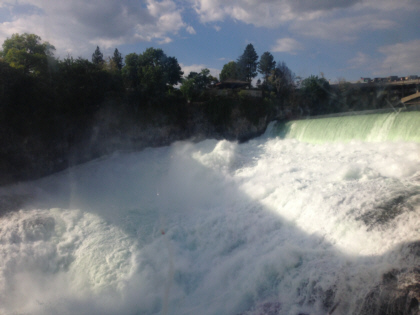 Later that evening, we all joined other runners for dinner at Anthony's seafood restaurant. Spokane had been a fun weekend. Continue... 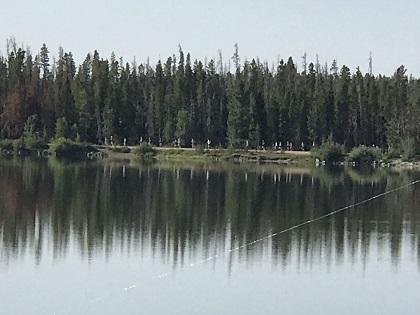 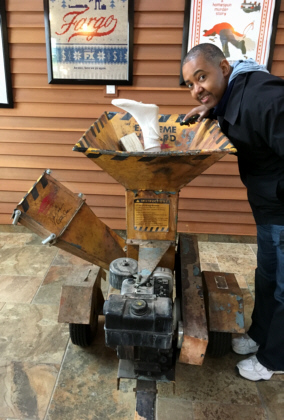