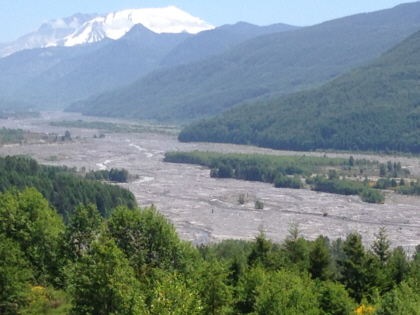 We did not need to wake up quite as early as the past three days. Traci took advantage of the extra time by going for a morning run. I assumed she meant she'd be running on the treadmill in the fitness center but when she returned she told me she went for an outdoor run in Chehalis. I was not thrilled about the fact that she went running by herself in an unfamiliar town. However, she was back safe and sound. She even took pictures of the historic downtown area. 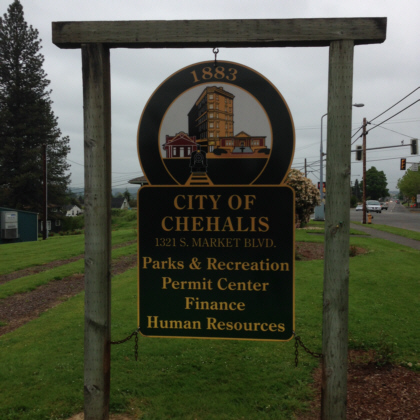 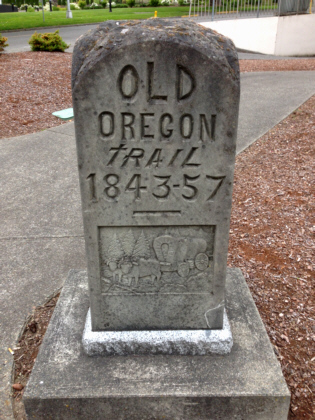 We enjoyed our last breakfast at the Best Western. The staff even handed out TripAdvisor.com bags to all the guests. We checked out and loaded our luggage into the car. Our destination for the day was Mount St. Helens National Park to see the infamous volcano. After our Mt. St. Helens outing, we would be moving on to downtown Seattle to begin the Seattle leg of our trip.

The entrance to Mount St. Helens National Park was less than an hour from our hotel. We stopped by the visitor center near the park entrance. We paid the $5/person fee to walk through the small museum and to watch a film about the Mt. St. Helens volcanic eruption of 1980. The museum presented educational exhibits about the geology and history of the area in addition to information about the Mt. St. Helens eruption.

Outside the visitor center was a one-mile loop trail. I thought maybe we would finally get a glimpse of the volcano but like the pattern we had experienced since arriving in Washington, the morning clouds had not burned off yet. I am not even sure if the volcano is visible from this visitor center. It is a large park. Traci and I walked the trail. It starts out on a path through the woods but the rest of the trail is on a boardwalk over a marsh. Once again, the landscape of Washington had surprised me. If someone had blind-folded me and dropped me off here, I would have thought I was in the Florida Everglades on an overcast day. We were surrounded by interesting aquatic plants. Although, we did not see much wildlife, there was a constant cacophony of animal sounds. These were mainly bird sounds - chirping and singing. I even caught a glimpse of a large bird taking off. It had long legs, a long neck, and long bill. Every now and then we would hear a slow low-pitched, monotone "Whumm". I guess it might have been a large frog or toad but I never saw one to confirm the source of this strange sound. 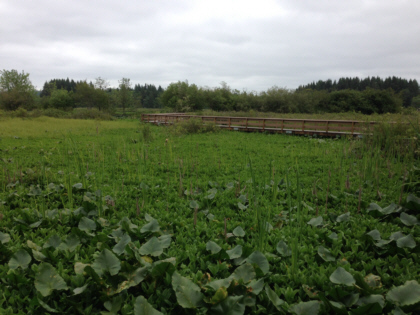 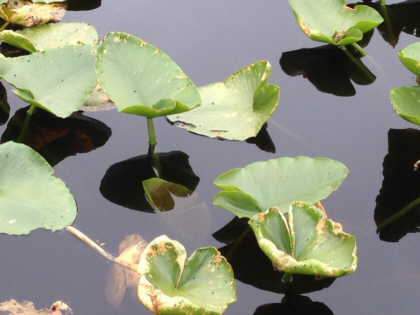 I am glad Mount St. Helens was the only outing of our planned itinerary for the day because we had already spent about an hour at the visitor center and we had not seen the volcano yet. We got in the car and headed towards Johnston Ridge Observatory which is approximately 45 miles away. It took us more than an hour to make the drive because of all the stops we made at scenic viewpoints and visitor centers. I don't think we missed one. It took a while before we finally saw the volcano but what a sight it was when we finally did. The clouds of the overcast morning had dissolved into a bright, sunny day. We came around a curve and there it was - a white peak against the blue sky. 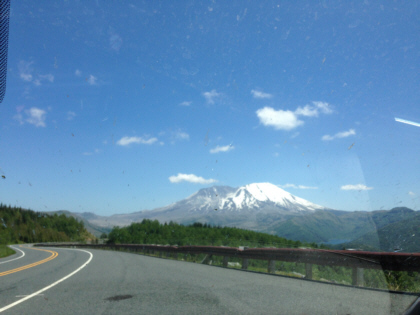 As we got closer to the Johnston Ridge Observatory, we could see evidence of the 1980 eruption in the valleys and on the mountains. The Mount St. Helens eruption was more of a pyroclastic event than a lava flow. Pyroclastic flows and pyroclastic surges are hot avalanches of rock, ash, and debris that obliterate anything in their paths. We could actually see which direction this phenomena traveled. There were valleys and mountainsides in which long, bone-colored tree logs were all laying on the ground facing the same direction. It was a bizarre sight. However, Mother Nature always replenishes herself. Plants and animals are returning to the area.

We eventually made it to the Johnston Ridge Observatory. It sits on a ridge in front of the volcano. There was an $8/person fee to enter the building. Inside, there were educational exhibits about geology. There was an interesting station where you could jump on a pad that displays the seismic impact of your landing. We watched a film about the Mount St. Helens eruption. Mount St. Helens began to "awaken" in March 1980 with a series of earthquakes. Scientists were starting to notice a bulge forming in the side of the mountain. That must have looked really strange and scary. Evacuation orders were issued for nearby residents. Steam began coming from the mountain. Thousands of earthquakes were recorded in the 2 months leading up to the eruption. Despite this, some people refused to evacuate the area. Finally on May 18, 1980, the volcano erupted. The eruption actually blew out the side of the mountain. Fifty-seven people lost their lives. I was in elementary school when this eruption occurred but I remember the news coverage and volcano discussions in school. At the conclusion of the film, the screen went up and the curtains opened to reveal a gorgeous view of the snow-capped Mount St. Helens through the building's large windows. 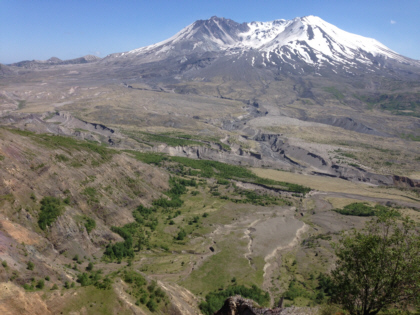 Traci and I hung around the Johnston Ridge Observatory looking at exhibits, the souvenir shop, and the volcano from the observation deck of the building. We stayed for a ranger-led talk about the eruption. It was pretty much the same information we heard in the films we saw at the visitor centers. The only difference this time is that we were able to ask questions.

On the way out of the park, Traci and I stopped at the Hoffstadt Bluffs Visitor Center again. We were enticed by the menu at its Fire Mountain Grill. In addition to the delicious food, the restaurant had a great view of the mountain from its outdoor deck and from its interior. We chose to enjoy the view from an indoor booth. Other than a man waiting for a helicopter tour, Traci and I were the restaurant's only patrons. Traci and I shared a delicious seafood platter and a wild berry crispy cobbler. After that very satisfying lunch, Traci and I returned to the car for our 2.5-hour drive to our next hotel - the Homewood Suites by Hilton Seattle Convention Center. 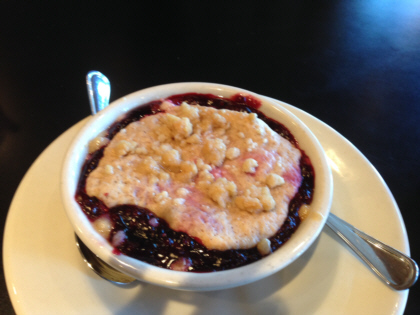 The Homewood Suites is a nice hotel located in downtown Seattle. Since we would be doing organized tours during our stay, we had no plans to keep the rental car. Besides, with hotel parking at downtown hotels running $30 - $40 per night, having the car could become expensive - not to mention parking at attractions around town. Our plan was to drop off our luggage at the hotel and return the rental car to National's downtown location. The hotel's valet moved our car off to the side while we were checking in. In the process of doing this, he accidently set off the car alarm (He He!). I did not feel so bad about my similar mishap with that car earlier in the week.

We got checked in, dropped off our luggage, and then drove the rental car to National's car drop. We decided to walk the approximate half-mile distance back to the hotel. I had already walked it online using Google Maps' Street View feature before the trip. Therefore, I recognized the landmarks along the way.

Our room was a mini suite that had a kitchenette containing a refrigerator, sink, stove, and microwave. We had a view of high-rise buildings and Interstate 5. We could hear the constant sound of the highway but our minds quickly adapted and we barely noticed it after the first evening. The Convention Center is located adjacent to the hotel. Alamo and Budget both have rental car offices next to the hotel. Had I known this when planning the trip, I might have considered renting from them for the convenience factor. There is a small grocery store (Pike Grocery) at the end of the street. Several restaurants and stores are within walking distance. 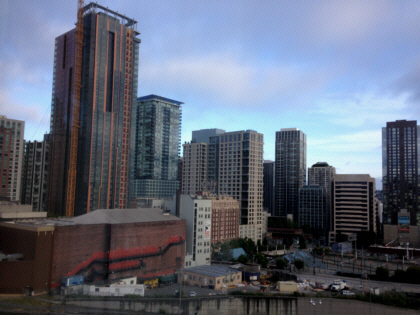 view from our room at the Homewood Suites in downtown Seattle

As for the hotel's proximity to popular tourist attractions, it is just on the edge of what I would consider walking distance. Seattle's major tourist areas are spread out enough that choosing to stay near one such as the Space Needle means you have quite a distance to cover to get to say Pioneer Square or Pike Place Market. The Homewood is approximately 0.5 miles from Pike Place Market but a mile from Pioneer Square and a mile from the Space Needle. We did not mind these distances. We walked to Pioneer Square during our stay but took the monorail from the nearby Westlake transportation center to the Space Needle area.

The Homewood Suites had the most bang for the buck of the downtown hotels I researched when planning this trip. Many of the downtown hotels have rates of $300 per night and higher. Many of these did not meet our booking criteria that I mentioned earlier such as free Wi-Fi, free breakfast, etc... There were less expensive hotels but they got poor reviews on sites like TripAdvisor. The Homewood's rate was $200 per night. This was by far the most expensive rate of all the hotels at which we stayed during our trip. We were very pleased with our stay. The Homewood met our booking criteria (free Wi-Fi, free breakfast, fitness center, and reward points) and more. Who knew a delay in repairing our toilet would result in the hotel refunding us for one night's stay? The toilet tank had a bad flap that caused the toilet to flush by itself periodically. We noticed the problem late that first evening and called the front desk. The manager stopped by to check it out and told us his repair crew was gone for the day but he'd have them take care of it the next day. In the meantime, we just kept the bathroom door closed so that the sound would not disturb us. The next day, it took several calls to the front desk and finally a conversation with a hotel manager (different manager) before the problem was resolved. When the manager investigated and found out the repair delay was due to a miscommunication on their end, she credited us for one night. Who hoo! Continue...