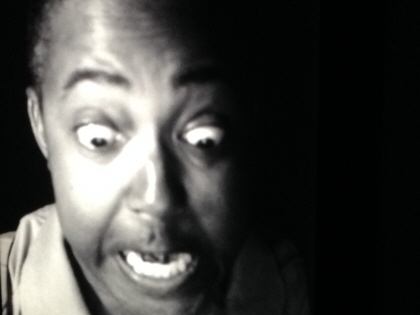 Friday was another day of sightseeing in Seattle. Traci got an early start because she had booked a private running tour with City Running Tours - Seattle. She did one of these tours in Chicago and had such a good time that she made sure I left time in our itinerary for her to do one in Seattle. I am not a runner so this was my opportunity to sleep in a little and have breakfast while Traci was running all over the city.

Her guide met her at our hotel at 8 AM. They went on a 6-mile running tour of Seattle stopping to take picture along the way. Traci said she had fun but the City Running Tours - Chicago remains her favorite running tour of all time. Besides, there were some issues with the Seattle run. Before their run, her guide asked what she had interest in seeing but they did not stop by any of the places she mentioned. Secondly, the company gave her energy and protein bars. She discovered later that the items were months past their sell by date! 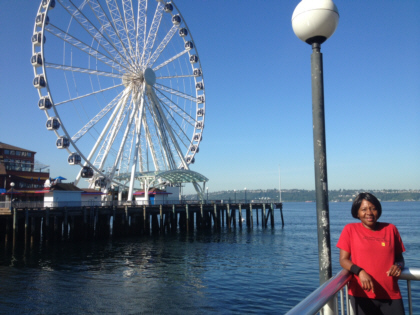 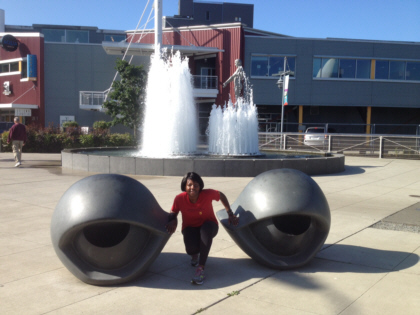 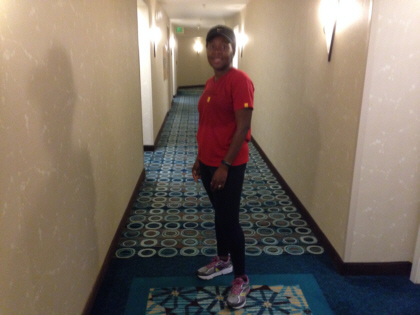 Traci was back from the run by 9:30 AM. She got cleaned up and had breakfast. On our agenda that day was Bill Speidel's Seattle Underground Tour. My AAA tour book had given this tour high marks. It is located in the Pioneer Square section of the city. It was a nice, sunny day so we decided to make the 1-mile walk from our hotel.

The Underground Tour was a fascinating 75-minute walking tour. The guide told us about the poor design of the original city. After the Great Fire of 1889, Seattle was rebuilt on a sturdier foundation of concrete to avoid the tidal and sewage problems of the past. What made our underground tour so remarkable is that our guide took us beneath the street to show us what remains of the original streets and building entrances. We walked through dim tunnels. We could hear people walking on the pavement above. We could hear people rolling suitcases. Our guide was stumped by one of the sounds. We all came to the consensus that it was someone riding a skateboard. There are some segments of the sidewalks in Seattle that contain small glass squares. These were originally used to as a light source for the underground. I never noticed them while we were walking around the city but after this underground tour, it seemed like Traci and I were always pointing them out to each other as we walked the streets. The Bill Speidel's Seattle Underground Tour was worth the $17 per person. Great tour! 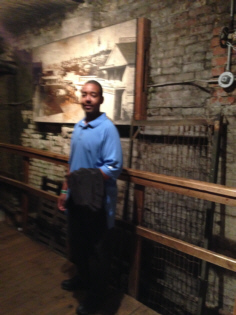 ready for the Underground Tour 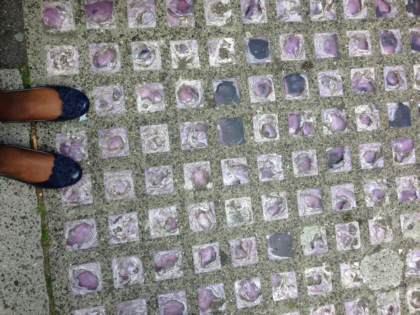 Now we know why these glass blocks are in the sidewalks.

Inspired by a stop on her running tour earlier that day, Traci mentioned to me that she wanted to visit the Experience Music Project (EMP). I was surprised she wanted to go there. I had read that it is a museum containing sci-fi exhibits and music memorabilia. Neither one of these is high on her list of preferred entertainment. Although I was perplexed by her choice, I was happy and relieved that she was excited about checking out the EMP. We had nothing else scheduled for the day other than a 7:00 PM dinner and show reservation. This took the pressure off of me for finding something for us to do until then.

Now that we decided we were going to visit the EMP, we had to figure out how to get there. It is located on the opposite side of town next to the Space Needle. One of the guides at the Underground Tour office told us we could walk up the street to the transportation center and find information on taking a bus. We assumed there would be an information booth where we could ask for more detailed instructions on what bus to take but we found no such thing. After a few minutes of walking around in the station looking like lost tourists, we decided to set out on foot. I had a city map and was confident I knew the way. As we walked along 3rd Avenue, we came across bus stop signs that contained the information we needed to take a bus to the EMP. They even had digital countdowns to let you know what time the next bus would arrive. Traci and I were too impatient to wait, so we kept walking until we got near the Westlake Center. I knew there was a monorail that travels between the Westlake Center and the Space Needle.

Like the Space Needle, the monorail was built for the 1962 World's Fair. It makes the trip between WestLake and the Space Needle in about 90 seconds. It makes no other stops. Traci and I arrived at the station at the right time. We paid our $2.25 per person. Almost as soon as we sat down, we were arriving at the Space Needle.

Admission to the EMP was $23 per person. We started off in the fantasy section. It was a tribute to fantasy movies such as the Hobbit, Narnia, etc. It also had exhibits dealing with comic books and fantasy games like "Dungeons and Dragons" (Remember that one?). Not being huge fans of this genre of entertainment, Traci and I made it through that section relatively quickly.

The sci-fi and horror sections kept our attention much more than I had anticipated. There were costumes and set props from "Star Trek", "Star Wars", and many more. The interactive exhibits were amongst the coolest I have seen. You can create a monster scene. You can try out your fear face. There were many film excerpts and director interviews. 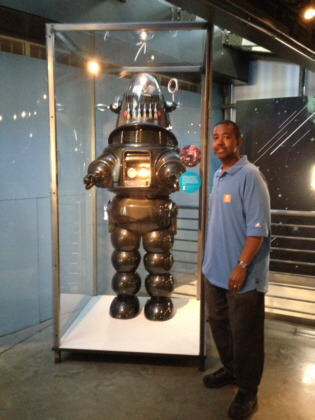 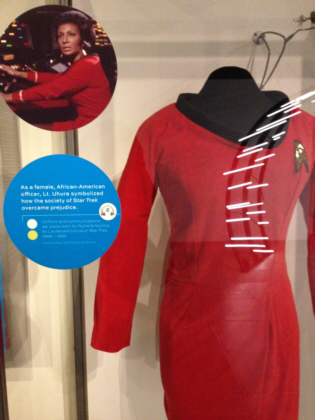 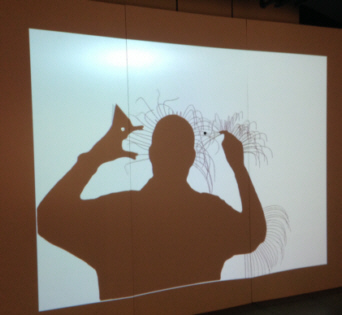 trying out some film effects 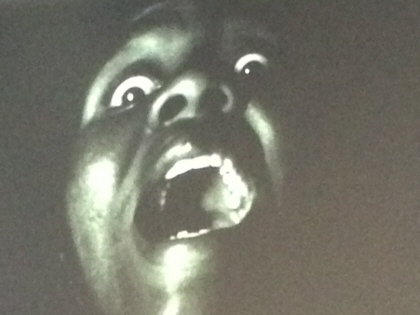 The EMP has a section devoted to the Washington band Nirvana. Nirvana is that is credited with introducing grunge music to the mainstream. There is also a section of the museum dedicated to the legendary musician Jimi Hendrix.

The area where we spent the most time was the Sound Lab. It is a hands-on exhibit where you can learn to play musical instruments. Experienced musicians can collaborate with other musicians in the room. You can try your hand at mixing. You can even star in a music video. Traci and I did a music video for the 80's hit "We Got the Beat" by the Go-Go's. After that experience, Traci and I agreed we were not going to quit our day jobs. That was a sorry video.

Traci was more engrossed in the interactive music section of the EMP than I ever thought she would be. She out-lasted me even though music has been my hobby for all my life. While she was off making music, I had a seat in front of the humongous Jumbotron where music videos and concert footage is shown. They even showed the entire "Thriller" video. That one never gets old. I miss MJ.

We finally made our way out of the EMP after spending more than two hours there. It was time for us to move on to our planned evening outing. We had reservations for Teatro Zinzanni. It is a Cirque du Soleil-style show at which a 5-course meal is served. Our plan was to get dressed up for our "splurge" night; however, since Teatro Zinzanni is only a few blocks from the EMP, it was not practical for us to get transportation back to the hotel, get changed, and then get transportation back to the theater. Therefore, we walked to the theater and attended the show in our casual sightseeing clothes. We did not feel out of place. Some people were dressed up while others were in jeans like us. I was just glad we had our jackets with us. The air condition was really cranked up in that building.

The show we saw was a comedy called "When Sparks Fly". It was three-hours long. The performers were all very accomplished and masters of their crafts. There were aerialists, a contortionist, singers, and an illusionist. There was a live orchestra. Dinner tables surrounded the stage. During the dining portions of the evening, the actors would come to the table in-character and interact with the guests. A different show is presented every few months.

Although the show was good, the food was nothing special. Furthermore, I felt nickel and dimed. At $120 per person for our evening at Teatro Zinzanni, I was not expecting to pay an extra $4.50 to have a basket of bread at the table. By the time the gratuity of $6 per person was tacked onto our bill, I realized I had paid $23 for a basket of bread and a soft drink.

It was after 10 PM by the time we left the theater. We took the monorail to the Westlake Center and then walked the 6 blocks or so back to our hotel. Continue...