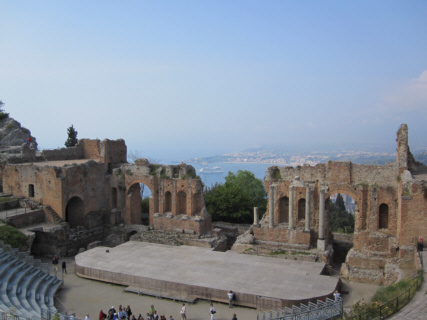 I was greeted by the most amazing view when I stepped onto my balcony for a glimpse of Taormina early Wednesday morning. The city is located on the Italian island of Sicily and is situated at the foot of the Mt. Etna volcano. This cone-shaped volcano was snow-capped and had clouds of steam drifting from its summit. I regret not taking a picture of the scene at that time because this was the only time the summit was visible during the remainder of our time in Taormina.

Our shore excursion for the day (Best of Sicily: Mt. Etna & Taormina) began early. Audie did not join us this day because he wanted to wait for his and Sugar's luggage to arrive. He was elated when it was delivered to their stateroom around 1 PM that day.

Our tour guide for the excursion was my favorite. She was very knowledgeable and full of personality. She was a fast walker and a fast talker. This 7-hour tour was a condensed version of two full-day tours and she was determined to get it all in. I was blown away when she told us she gives this tour in five languages!

After a short bus ride into the hills, we followed our guide on foot through the stone archway and onto the medieval street of Corso Umberto. Through the centuries, Taormina has been inhabited by Greeks, Romans, Byzantines, Saracens, Arabs, Normans, and Spanish. Our guide explained how to differentiate the time periods and constructors of the town's old buildings by their architectures. Today most of these buildings house stores and souvenir shops. We were touring the area before business hours and thus had to walk single-file most of the time to contend with occasional delivery vehicle traffic on the narrow street. Vehicles are prohibited in this area after 9 AM. 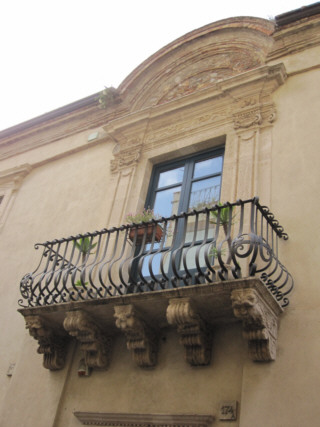 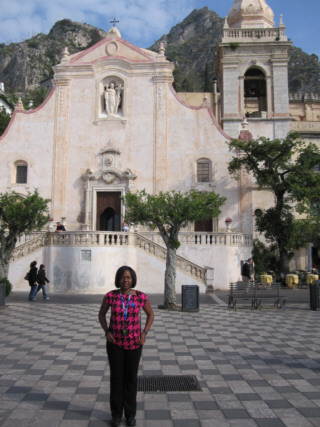 As we left the stone archway of the old street, our guide led us up a hill to the ancient amphitheater. This amazing structure is believed to have been built by the Greeks in the third century B.C.. It was eventually remodeled to be used for gladiator events during the time of Roman occupation years later. We followed our guide up the uneven steps of the amphitheater to its highest point. The Greeks chose a great spot at which to build this arena because just beyond the stage was a breathtaking view of the city and harbor below.

Greco-Roman amphitheater dating back to the 3rd century B.C.

As we made our way out of the amphitheater, I was really appreciative of having begun this tour so early. Passengers from other cruise ships had begun arriving and the streets were now clogged with tour groups waiting to enter the amphitheater.

We were given about an hour to roam the Corso Umberto area. Traci and Sugar used this opportunity to do some shopping. I, on the other hand, am not a shopper. I used this time to taste my first Italian gelato. I decided to try lemon flavor probably because the sight of the huge lemons we saw in Sorrento the previous day was still on my mind. I absolutely loved my lemon gelato. It tasted a lot like a Rita's water ice. Those who live in the mid-Atlantic region of the U.S. will probably know what I mean.

I also took a peek inside the main cathedral (Church of San Nicola). It was built in the 1400's on the ruins of an ancient church. It is a mixture of Norman, Arabian, and Renaissance architectures. Most impressive to me were the smooth pink marble columns and blue marble columns inside the church.

Before long, it was time to regroup at the fountain in front of the cathedral. Sugar was the envy of several women in our group when she showed up with a purchase from one of the shoe stores. However, she had not purchased women shoes. Instead, she had bought a pair of shoes for Audie. 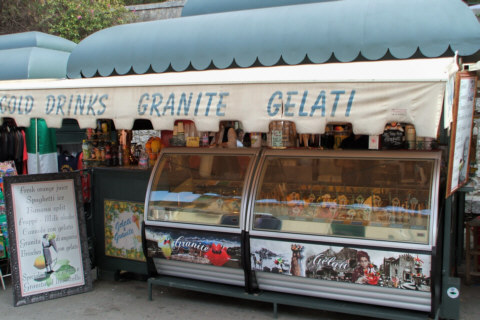 I bought my first Italian gelato at this stand. 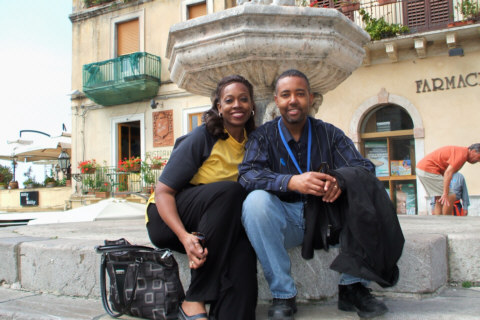 Sugar and I waiting for the rest of our tour group

We boarded the bus and began our ear-popping ascent on the winding roads of Mt. Etna. As we rode higher, I was surprised to see houses, farms, and small businesses. After all, not only is Mt. Etna Europe's highest volcano, it is also its most active! Our guide told us that every now and then a lava flow destroys everything in its path. The people just rebuild when the flow solidifies. In fact, the restaurant at which we would dine that afternoon was recently rebuilt after it was destroyed in a 2002 lava flow.

The documentation we read before this excursion advised us to bring a jacket. We did but as we approached our drop off point on Mt. Etna, our guide began to make us feel a little nervous. She put on a jacket, an overcoat, a scarf, gloves, and a cap. Yikes! Is my thin black jacket going to be enough to keep me warm?

As we exited the bus, I was relieved to know I could bear the chilly mountain air with what I had on. We were not going to the snow-capped 11,000-foot summit. At our elevation (6,000 feet), there was a light drizzle mixed with a few snow flurries. Our guide explained she comes up the mountain at least twice per day. She was wearing what she wears for the longer tours of the volcano.

We were given about 30 minutes to walk around the rims of some of Etna's craters. We were at the site of the 2001 and 2002 lava flows which have now solidified as lava rocks. Some of the rocks were reddish in color while others were black. Our guide told us that some of the rocks mix with minerals such as gold and silver. She was somehow able to find a few of these pebbles on the ground. The specks of gold and silver were so small that I image a person would need to mine tons of these rocks to get anything of significance. 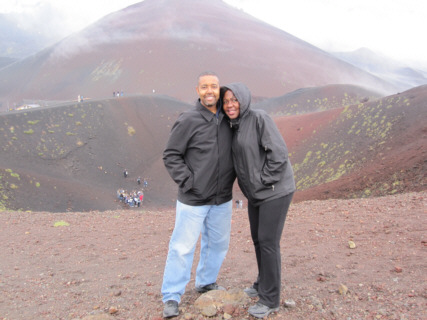 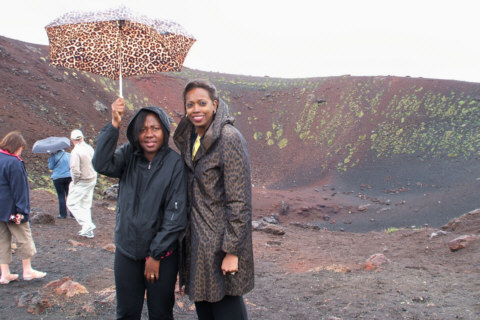 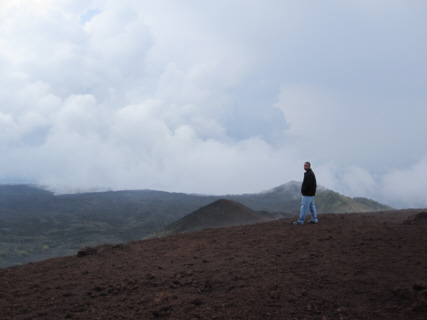 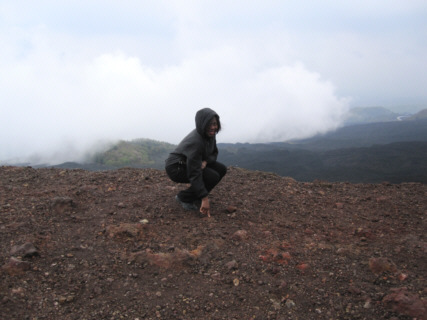 clouds rolling in; It's time to go.

It was a 10-minute bus ride further up the mountain to the restaurant at which we had lunch that afternoon. We were offered samples of local wines in shot glasses as we entered. I'm not a drinker but the colors of the wines intrigued me. One was yellow, one was orange, and the other was clear. I took a sip of the orange one. It was sweet and syrupy. Traci and Sugar tried all three and said they all tasted like medicine.

For lunch, we were served rigatoni. I was quite hungry so every time the waiter came to our table, I allowed him to pile more pasta on my plate until I was full. Little did I know, this was only the first of three courses. The second course was a pork chop and salad. I was too full to eat that. Besides, the salad and its dressing was piled on top of the pork chop. I don't eat salad and I don't like my food to touch in cases where it makes the meat soggy. I tasted a non-soggy edge of the chop and it was delicious. The third course was a huge Sicilian cannoli. I somehow found enough room in my stomach to finish most of it.

Our excursion was running a little behind schedule. As we were heading down the mountain, our tour guide received a phone call from the ship to find out where we were. The good thing about booking a shore excursion through the ship is that you don't have to worry about getting left behind if your tour does not return you before final boarding. Our driver made it back in record time and we were able to take the last tender back to the ship. Continue...