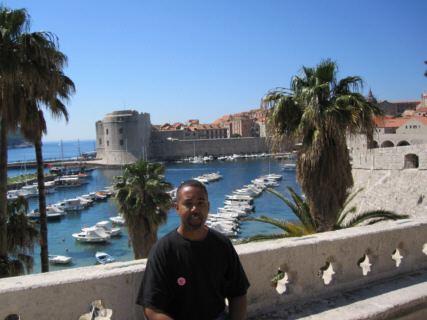 Never in my wildest dreams would I have imagined I would be writing about a trip to Croatia; yet, here Traci and I were on our balcony eating breakfast and watching the crew secure the ship to the dock in the Croatian city of Dubrovnik.

Our shore excursion for this port was Cultural Dubrovnik & Village Life. It was a short motor coach ride to the Old Town. The Old Town looked like a scene out of a book of fairy tales. It is surrounded by a thick medieval wall. We had to cross a moat on foot to enter the stone archway. Inside the wall, our guide led us down the gleaming main thoroughfare (the Stradun or Placa). The place was crowded with tourists; therefore, our guide held up a paddle containing our group number as she walked. We were able to listen to her commentary through the ear piece of our Whisper units. The excitement I felt with all that was going on around us, made it difficult to concentrate on our guide's narration. I was a amazed by the medieval buildings with orange roofs, the street vendors dressed in traditional Croatian clothing, the cathedral bells ringing, the calls of the vendors of the temporary street market, and everything else in this charming town. Our guide pointed out orientation landmarks and a few of her recommendations for our free time visits after the tour. These recommendations included the Franciscan Monastery, the Rector's Palace, the Cathedral, and the world's oldest pharmacy that dates back to the 14th century. We were given 30 minutes to look around before we needed to regroup for the next phase of the tour. This was not nearly enough time to do any real exploring; however, in that time, Traci managed to find a Nike store. Just as some people like to visit Hard Rock Cafe restaurants all over the world, Traci likes Nike stores due to her love of running and working out. She has posed in front of Nike logos from Iceland to South Africa. On this day, Croatia was added to her list. 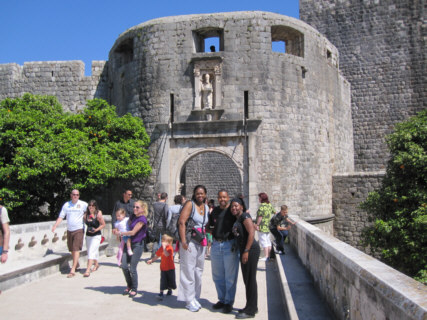 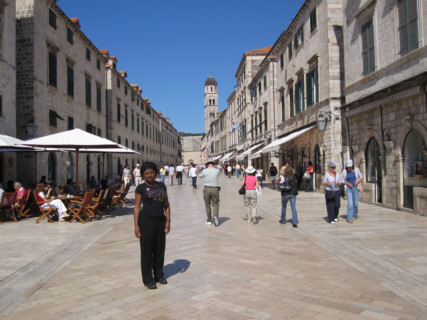 Traci on the Stradun 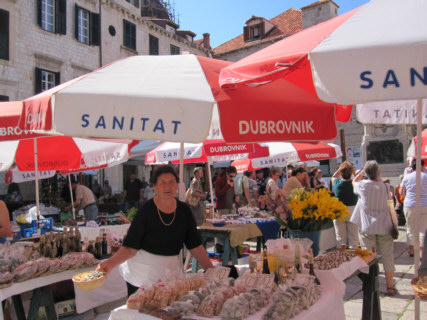 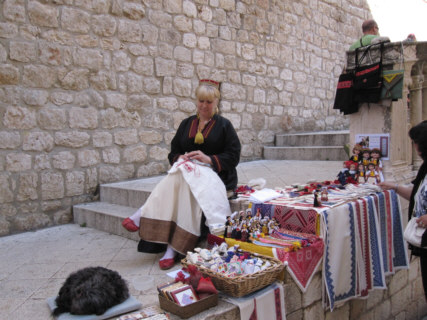 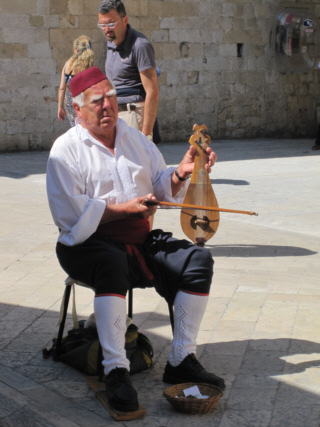 We re-boarded our motor coach and were driven into the Croatian countryside. As with most of our shore excursions, we found ourselves ascending narrow, winding mountain roads. As I looked out of the window, I saw the most gorgeous view of the walled Old Town jutting into the rich blue sea - beautiful!

After making it over the mountain we descended into the green Konavle valley and continued to our next destination - the home of Mijo Sisa Konavljanin, Croatia's only native painter.

The artist lived in a pretty home in the country surrounded by colorful flowers, cacti, and lemon trees. As we entered, we were offered plum brandy, a shot glass of very strong local wine, and dried figs. This was my first time eating dried figs. They tasted like (Surprise! Surprise!) the inside of a Fig Newton. The artist was standing in the middle of a room full of his paintings depicting rural Croatian scenes. There was also a self-portrait. This art studio visit was different than others I've done in the past in that there was not very much explanation and there was no pressure to buy anything. In fact, I don't even think any of the pieces were for sale. 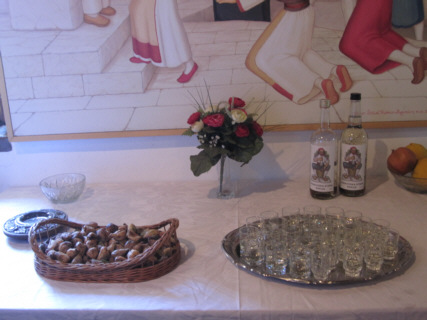 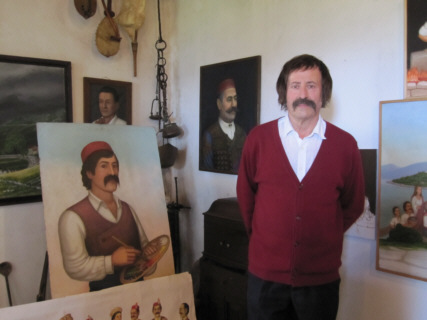 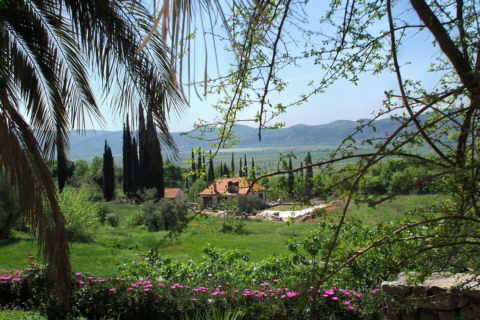 I stepped out of the house to admire the beautiful countryside. I was soon joined by Audie who told me about the contrast of the Croatia I was admiring now and the Croatia he saw during his military assignment in the region during the Bosnia War of the 1990's. He said there were bombed out buildings everywhere and poor infrastructure. They also had to be wary of rebels that would lay land mines in the valleys in the middle of the night and then fire off rounds from the other side of the mountains to entice the U.N. soldiers to cross the mine fields to investigate. Fortunately, the war is over and the mine fields have been cleared. However, our guide told us that she is still apprehensive about straying off of well-traveled paths to this day.

From the artist house, we were driven to a farmhouse where we would be served a Croatian lunch. As we entered the driveway, I was wondering what kind of farm we were visiting. There were several dismantled cars on the property. The scene was much different as we exited the bus and walked to the back of the house. I could smell food cooking. There was an accordion player and a guitarist dressed in traditional Croatian clothing and singing folk music. There was a table containing dried figs and more shot glasses of the strong local wine. There was also a treat that I found delightful - lemon peels coated with sugar. Yum! Continue...