We had two full sea days from New York to Bermuda and 1.5 sea days on the return trip to New York. It was raining and overcast on our first sea day. Traci and I just don't seem to have good luck with the weather and sea conditions between New York and Bermuda in September. This was our second time doing this itinerary and like our experience 15 years ago, the trip to Bermuda was rocky. I'm sure some of this had to do with the remnants of Hurricane Maria churning in the Atlantic. The captain made an announcement that he was keeping us a safe distance of 500 miles from the storm during our journey. The rocking on this trip was not the worse I've experienced. I got a little queasy one night but I was already headed to bed. I had Dramamine with me but I did not need it. I felt much better when I woke up. Traci was wearing a prescription motion sickness patch behind her ear to prevent motion sickness but she took it off after the second day because of the side effects (blurred vision and congestion).

Traci and I fell into a routine fairly quickly. I was surprised the routine did not include Traci attending a morning exercise class each day like she has done on most of the cruises we've done. She only made it to the 7:15 AM stretch class and the 8 AM Zumba class on Day 2 and Day 7. That was it. I guess she was still trying to recover from the 200-mile Ragnar relay.

Regardless, we ate breakfast in the dining room almost every morning. The exception was the morning that the dining room inexplicably had a scheduled 9 AM closing time instead of the usual 9:30 AM closing time. We ended up eating a good breakfast in O'Sheehan Pub instead. The other exception was Day 3 when the late nights caught up with us causing us to sleep until 11 AM. This also happened to be the day on which we were supposed to move our clocks forward an hour to prepare for Bermuda time thus making it appear as if we woke up at noon.

After breakfast, Traci and I usually went our separate ways depending on our interests. Capital Jazz had activities happening all over the ship - cooking classes, contests, mixers, dance classes, new album listening parties, and much more. These were in addition to the amenities that the ship offered (pools, spa, rock climbing, etc.). My favorite Capital Jazz activity was attending the artist Q&A sessions. It seemed like everyone who performed this year participated in a Q&A - everyone from Grammy winners to background singers. Although I have never desired to work in the entertainment industry, I am always fascinated by those who have the business savvy and talent to make a living at it. 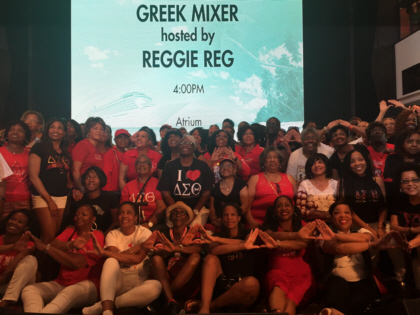 Traci with her Delta Sigma Theta sorors at the Greek Mixer 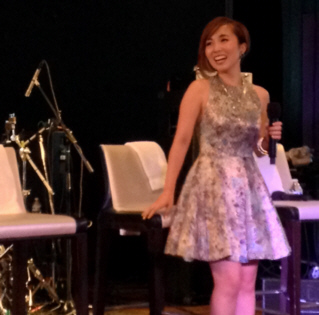 I also enjoyed attending Michael Colyar's comedy workshop in which passengers go on stage to tell a joke or two and then receive feedback on their performance from Michael, a professional comedian. I was not brave enough to go on stage but hats off to those who were. It was a fun time.

When in our cabin, we watched episodes of Unsung, a documentary of the back story of R&B artists - some of whom were performing on the cruise. Capital Jazz had arranged a channel to show episodes of the show and other music documentaries throughout the week.

Capital Jazz offered really nice theme brunches on sea days in the Manhattan Room. Traci and I attended these together. These were buffet meal performances. There was a Gospel Brunch with Kirk Franklin, a Brunch with Jeffrey Osborne, and a Soul Brunch with Eric Robeson. The artists would do normally do an 11 AM show and 1:45 PM show. Traci and I unnecessarily stood in line for an hour waiting for the doors to open for Kirk Franklin's Gospel brunch on his first day of performances. If we had waited for his third or fourth performance, we could have walked right in without all of the standing in line. Fortunately, we learned our lesson after that first day. Anyway, it was an awesome show. Kirk Franklin always brings down the house. Everyone was jamming - passengers, wait staff, and crew. 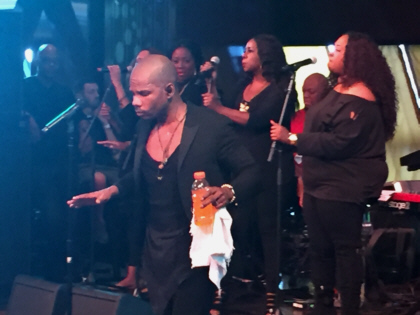 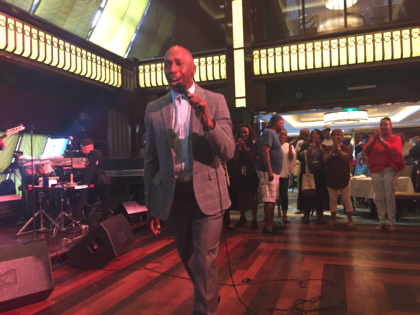 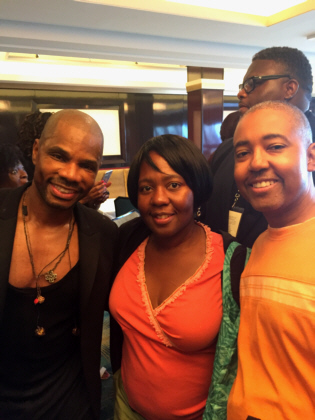