The ports of call this year were: Freeport, Grand Bahamas; Nassau, Bahamas; Ocho Rios, Jamaica; and Labadee, Haiti. With the exception of Haiti, Traci and I did not do any excursions or tours since we had been to these islands before. We just got off the ship for an hour or so at these ports and browsed the shops and craft markets near the pier. 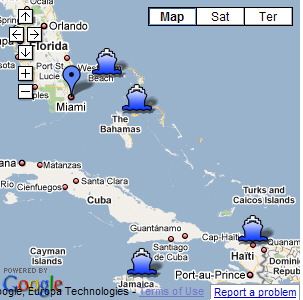 Although, Traci and I did not do much in Freeport, this port created a special memory. There was a small reggae/calypso band playing for tips at the pier. Most of the time there were only a handful of tourists listening to them before heading off to explore the island. But did I mention Tom Joyner passengers are a party crowd? As many of us were returning to the ship, this small band suddenly found themselves providing music for a massive Electric Slide and other line dances. Eventually, someone brought out a stick and the limbo contest began. It was a great time. I'm sure the small band collected plenty of tip money that day. 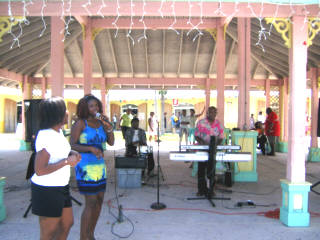 "How about a little audience participation?" 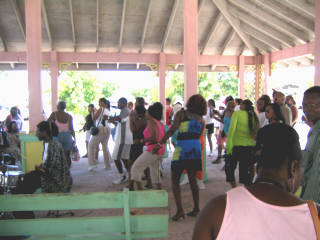 "Let's get this party started!"

Labadee is the site of one of Royal Caribbean's private beaches. There is no place for a huge cruise ship to dock so we had to be tendered ashore. The beautiful beach is large enough to accommodate nearly 3000 cruise ship passengers without ever feeling crowded. It has a small water park, water sport activities, and a craft market to keep visitors busy when they are not lounging on the beach.

Traci and I did a 90-minute power boat tour of the northern coast of Haiti offered by Royal Caribbean. Traci did not care for the tour. The high speed of the boat made her nervous. To make matters worst for her, the tour guide began giving passengers the opportunity to pilot the craft. I took advantage of this opportunity with Traci by my side and we had a nice time. The tour guide showed us how to read the instrumentation so that we'd avoid the coral reef beneath the surface. We made brief stops to see the ruins of a French colonial fort and to see some Haitian fishing villages. We were only allowed to see these sites from the water. Haiti is the poorest nation in the Western Hemisphere. Add to this recent problems with rebels, natural disasters, and political corruption and one can understand why the island is not currently set up to handle tourists on their shores. Nonetheless, we were greeted by waves from the fisherman in their canoes as we sped along. 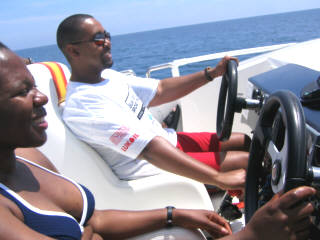 My turn to drive the power boat. 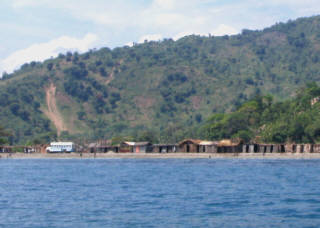 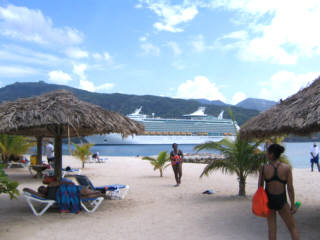 By 11:30 AM we were back in Labadee. This year, Labadee was the location of the annual Fantastic Voyage Beach party which took place from 11 AM to 4 PM. There was a stage set up for the emcees and DJ. There were contests, games, and free food at the food pavilion. The beach party was sponsored by Budweiser so there was plenty of free beer for those who wanted to indulge.

Labadee was the location for the Fantastic Voyage annual Light-Skinned versus Dark-Skinned Water Fight. Traci and I joined the rest of our fellow passengers as we stood in line in the merciless tropical heat for a half hour to pick up our Super Soaker water guns. It was then off to another line to fill up the gun at the water bins. I decided to skip this line and fill up the gun with ocean water. Then, it was time to join the battle. There were hundreds of people running around the beach spraying each other. I suffered an identity crisis. It seems some people thought I was light-skinned while others thought I was dark-skinned. The end result was I getting hit by everyone. I've never considered myself light-skinned but when I sprayed a light-skinned guy who was running past me, he stopped and said, "Yo! I'm on your side!"

Before long, Tom Joyner got on the microphone and declared his light-skinned soldiers had won the battle. I'm not sure how a winner is determined in a water gun fight. The Super Soakers were ours to keep but I returned mine. Our luggage was already maxed out from all the giveaways (T-shirts, cups, bags, gadgets) we received in our cabin each day on this cruise. Traci, on the other hand, held onto hers. 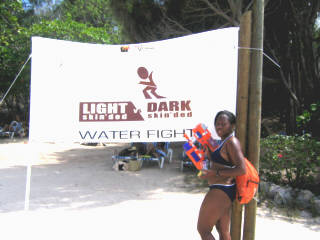 Traci is ready for the water gun battle. 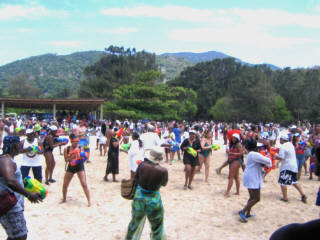 the heat of battle

We decided to check out the craft market in Labadee to find a refrigerator magnet to add to our collection. Man! Oh, Man were we in for an experience. These were the most aggressive vendors I've ever encountered in all my travels. We were smothered the minute we entered the building. There were people desperately trying to get us to visit their stalls. There were others that would just get in your face with a handful of bead necklaces and say, "My brother, how about these?"

Everything is negotiable in this cramped market and I don't just mean dollar amounts. One guy wanted my backpack in exchange for some of the woodwork he was selling. Traci ended up trading her water gun from the water fight and a dollar for 3 refrigerator magnets. After that sale, we quickly made our way out of the place to get a relief from all the aggressive salespeople. As if we didn't have enough abuse, we decided to enter the next building at the craft market. But, to our surprise, stepping into this building was like entering another world. It was more spacious and the vendors barely acknowledged our presence. In fact, Traci had to wake one salesperson to ask how much his postcards were. He told her the price and went on napping. continue...