Thursday evening, November 13th, I flew the 6:25 pm flight from Philadelphia to London on British Airways to meet Traci, who was already in London for a week of business meetings. This flight got me in London at 6:25 a.m. GMT (1:25 a.m. EST) Friday. I cannot say enough nice things about British Airways. Everything from the crew to the food and in-flight movies was stellar.

A Day In London

The Tour I Didn't Plan

Traci was already in London for work. She had been there since Tuesday morning. I decided to take "the tube" (subway) from the airport to downtown London where she was staying. It was approximately a 30 minute ride and much cheaper than taking a taxi. It got pretty crowded with each stop because I was traveling during rush hour.

I arrived at South Kensington station which was supposed to be a short walk to the hotel. It was very crowded and trying to drag my suitcase up all the steps became really frustrating. I stopped at a booth labeled Hotel Reservations and asked the lady how to get to the Jurys Kensington Hotel. Either she gave wrong directions, I misunderstood her, or a little of both, but I got lost. After 15 minutes of rolling my suitcase along the streets, pass the museums, a college, and into a residential neighborhood, I decided I probably should turn back and get directions from someone else. I eventually asked a lady who was waiting to cross a busy street. She pointed me in the right direction. Her directions sent me on a 20-minute walk pass South Kensington station again, restaurants, and some shops. I eventually arrived at Jurys Kensington Hotel dragging leaves under my suitcase. Despite this unexpected tour of London, it was a nice, sunny autumn day, so the walk actually felt great.

The Tour I Wish We'd Planned

Traci was just waking up when I arrived at the hotel. Even though her meetings for the week were over, it was still a workday for her; therefore, she spent several hours on the phone, answering emails, and planning presentations. I made the mistake of watching television instead of getting out of the hotel and fighting jet lag. Traci woke me up 5 hours later and said she was ready to hit the streets. My sleeping pattern seemed to be thrown off for the rest of the trip.

We had toured London the last time Traci had a business trip here two years ago. This time we wanted to see the Tower of London since we missed it the last time. We took the tube to the Tower Of London and bought admission tickets. It was around 3 p.m. when we entered the gate. We knew the attraction closed at 5 p.m.., so we hurried to find out where to sign up for the one hour tour. To our disappointment, the lady at the tour desk told us that the last tour for the day left at 2:30. Our only options at that point were to do a self-guided audio tour with headphones or just wander the castle on our own. We chose to wander in and out of the buildings on our own. 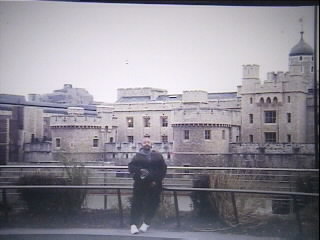 hanging out at the Tower Of London 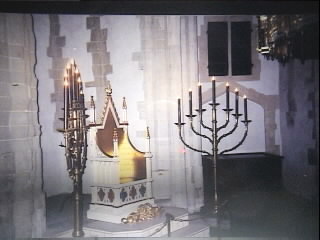 The Tower Of London is a castle whose construction was began around 1066 under William the Conqueror. It has served as a royal palace, an infamous prison, and torture chamber. Today it houses the Crown Jewels of several rulers of England. The place, not surprisingly, looks very medieval. During its history, parts of the castle had been destroyed by fire, World War II, and age; therefore, some of the buildings and exhibits have had to be restored. Oh well, I guess you can't expect something built in 1066 to still look totally intact in 2003.

Perhaps one of the main draws of the Tower Of London are the Crown Jewels. We were not allowed to take pictures of this exhibit, but I can tell you there was a lot of gold and a lot of precious gems. I was impressed by the artistry that went into creating these items.

After leaving the Tower Of London, we set off to find something to eat. This turned into two hours of wandering around trying to decide what we wanted. Traci had complained that she had not enjoyed any of her meals since she had been in London. We ended up getting fish and chips from a small fast food restaurant near our hotel and called it a night.

Paris - The City Of Lights

We checked out of our hotel Saturday morning and took a taxi to Waterloo train station. We had tickets for the 9:09 am Eurostar train to Paris. I purchased the tickets two weeks before the trip through our travel agent. This train is also referred to informally as the Chunnel because it travels under the English Channel through a tunnel - hence the name Chunnel. 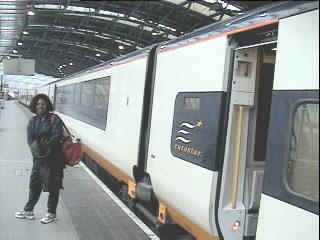 The Eurostar train travels up to 150 m.p.h. through the English countryside, under the English Channel (body of water that separates England and France), through the French countryside, and into Gare du Nord train station in the city of Paris - all in just under 3 hours. Around 20 minutes of the trip are spent in the tunnel under the English Channel. The train rides so fast and so smooth that it feels like you are flying. As soon as we pulled out of Waterloo Station, Traci and I both fell asleep. We were awakened 3 hours later by a voice on the train's PA system saying, "Mesdames et Messieurs, bienvenue ŕ Paris." ("Ladies and gentlemen, welcome to Paris.").

What's Up With The Guards?

Our train pulled into Gare du Nord train station at 12:53 p.m. Paris time (Paris is one hour ahead of London time). We took a taxi from the train station to our hotel. Our taxi driver did not speak English, so this was an opportunity for me to try speaking a little French. Even though I am nowhere close to being fluent in French, I actually managed to communicate with him a little during our ride. When I told him this was our first trip to Paris, he welcomed us and proceeded to point out some places of interest on our way to the hotel.

When we arrived at our hotel, I was surprised to find the street barricaded and patrolled by armed guards wearing bulletproof vests over their uniforms. Our hotel was on a small one-lane street and seemed to be the only one in the area that was blocked and being patrolled. Our taxi driver told one of the guards that he was dropping us off but the guard told him no cars are allowed on that street. We unloaded our bags and paid the taxi driver. A bellman from the hotel walked down the street to pick up our luggage and lead us to the hotel. I began to wonder if maybe a bomb threat or some other crime had taken place. I later found out from the front desk of the hotel that the reason for the heavy security is because the U.S. Embassy is around the corner from the hotel. With all the controversy over the Iraq war and U.S. policies, security had been beefed up in an effort deter any terrorist acts. Our street remained guarded around the clock for the rest of our stay. It was probably the quietest street in the city.

The name of our hotel was Le Faubourg. It is part of the Sofitel hotel chain. Our travel agent, John from Liberty Travel, helped me find this hotel. I chose it because of its proximity to some of Paris' main attractions and because it has a fitness center with a treadmill. The treadmill request was from Traci who ran her first marathon three days after we returned from Paris. She did use the treadmill during our stay. She also got up early one morning to jog up and down the Champs Elysées.

This hotel was fabulous. Upon our arrival, we met Teri who worked at the front desk. He gave us a tour of the hotel and our room. He was very friendly. I practiced speaking French with him each morning before Traci and I headed out for the day. He helped me with my pronunciation, asked about our sightseeing, and suggested things to see and do. I enjoyed these opportunities to practice speaking French.

Our room had terry cloth bathrobes and slippers for both of us. Each evening, the room attendant would turn down our bed, leave chocolate candy, bottled water, room service menus, and the weather forecast for the next day.

Breakfast, whether eaten in the dining room or ordered via room service, was included in the price of our hotel. This was not a continental breakfast either. It was a "Have a seat. May I take your order?" type of breakfast that included eggs, breakfast meats, a bread/pastry basket, fresh fruit cup, freshly squeezed orange or grapefruit juice, and more. The food was excellent.

The hotel also had a computer with a high-speed Internet connection in one of the lounges. The use of this computer was free of charge. We used it occasionally to check email and once to get directions to one of the restaurants we visited. We had to get used to the keyboard because some of the letters were on different rows than we were used to.

Finally, I have to give props to the concierge staff at Le Faubourg. These guys hooked us up with accurate directions, reservations, and great suggestions on how to take advantage of our limited time in Paris. They even managed to pull off an incredible lunch reservation that I'll explain later in this trip report. continue...