After lunch, we headed to Notre Dame Cathedral. This cathedral has been around since 1163 and its construction took over 200 years to complete. Looking at the church I could understand why. There were detailed sculptures and carvings all over this church. We walked up all the stairs to get yet another view of the city and to see one of the huge bells. My advice to anyone who decides to climb this spiral staircase is to make sure you do this on a day when you have some stamina. It is a long way to the top. We laughed and joked with a couple from Boston that was huffing and puffing behind us as we tackled all the steps. 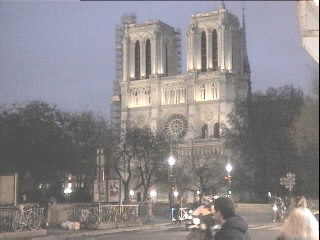 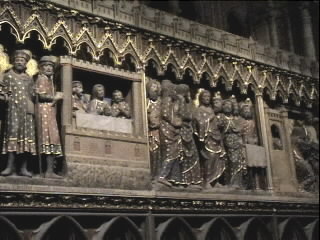 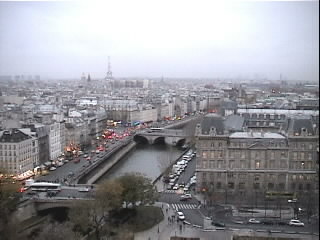 view from the top of Notre Dame 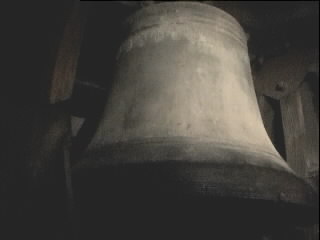 one of the huge bells

By the time we left Notre Dame, it was beginning to get dark. As Traci and I strolled along the streets, I could hear the bells of Notre Dame ringing; I could smell the pastries as we passed the numerous bakeries; and I could see the boats on the Seine River go under the bridges. It was at that moment I smiled and said to myself, "Wow! I am actually in Paris."

Traci and I were not quite ready to turn in for the night when we arrived back at our hotel. We decided to walk the Champs Elysees. This famous street is a shopper's dream. There are all types of stores lining this street. We walked along, browsing stores until we reached the Arc de Triompe. Napoleon ordered the construction of this monument to honor his military. The fun part for me was not the monument but watching the cars speed in an out of the traffic circle that surrounds the arch. There are no traffic lights or stops signs so people just speed right into the circle and cut the other drivers off. I'm surprised I did not see any accidents.

On our way back to our hotel, Traci and I stopped to buy some pastries from Ladurée. This place is located on the Champs Elysées and seems to specialize in desserts. We looked at a menu but it was in French and there were just too many desserts to choose from. Therefore, instead of eating there, we ordered some of the pastries we could see in the display at the counter and took them back to our room. These desserts were outstanding.

By Wednesday, Traci and I had been in Paris for four days and had not seen the Mona Lisa. So, after breakfast we headed to the Louvre.

The Louvre used to be a royal palace before Versailles was built. Today the Louvre is one of the largest art museums in the world. Traci and I knew there was no way we could see the Louvre in a day. In fact, the Louvre is so large it would take a person several months to see all the artwork in this museum. We decided our strategy would be to see the Mona Lisa painting and then wander until we got tired.

The interior of the Louvre is beautiful. It still looks like a palace. We saw ancient Greek and Roman sculptures. We saw huge Renaisance paintings and eventually the Mona Lisa. It was encased in glass. There were a lot of people in front of it taking photos. After looking at the Mona Lisa and snapping pictures, Traci and I were thinking the same thing - "It's nice but why has this painting received so much attention throughout history?" 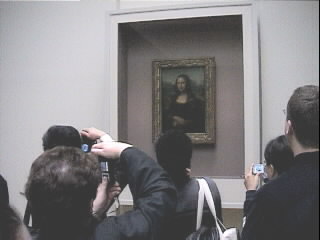 After seeing the Mona Lisa, Traci and I decided we had had enough culture for one morning and headed out of the Louvre. On the way, out we checked out the African, Asian, and Latin American exhibits.

We walked from the Louvre back to our hotel and chilled out a little before our afternoon black history tour of Paris. We found out about this tour from a business card we picked up at Percy's Place. Growing up, I had heard about blacks being fond of Paris. During a time in history where blacks were treated as second-class citizens and/or property in other parts of the world, they were treated as equal citizens in France. They had opportunities there that they could only dream about elsewhere in the world. Therefore, a black history tour of Paris sounded like a good opportunity to get a unique perspective of the city.

I had been playing phone tag with the tour guide, Ricki Stevenson, for the last two days. I eventually spoke to her on the phone the day before the tour. Traci and I were going to do her half-day tour. She normally does a full day tour but she needed to attend a program Wednesday morning, at which the President of South Africa was speaking.

Ricki told us to meet her and the other tour group members at Chez Clément Cafe for lunch at 2 p.m.. The cafe was only 5 or 6 blocks from our hotel so we walked. Ricki quickly spotted us as we entered the cafe even though we had never met in person (I guess tourists aren't hard to spot). She greeted us with a traditional French greeting of a kiss on both cheeks and then introduced us to some of the other members of the tour group.

We all sat down to have lunch. There were eight of us in all. During lunch, Ricki told us a little about herself and about the tour. She is a former TV newscaster from the U.S. and has been living and working in Paris for six years as a journalist. She ran down the names of some famous blacks that made Paris their home or visited often. Some of the people she told us about were Josephine Baker, Sally Hemings, Sidney Bechet, W.E.B. Dubois, and Langston Hughes. The information Ricki gave us at lunch was pretty much the bulk of our black history lesson for the day. The rest of the tour was dedicated to shopping, sightseeing, and insights into Parisian culture today.

After Ricki spoke a little about the tour and black history she asked each of us to tell a little about ourselves. As we listened to some of our group members, all of whom were from the U.S., it became apparent to Traci and me that our lunch mates have rather prestigious professions. There was a Harvard professor, a vice president of a public television station, and an NPR (National Public Radio) executive to name a few. All the credentials and accomplishments aside, everyone in the group was friendly and fun to be around. We talked, laughed, and had a great time at lunch.

We began our tour at the Paris Opera house that was across the street from the cafe. Next, we took the metro to the garment district.

Clothing and An Old Profession

The garment district is where clothes are made and shipped to retailers all over the world. You really have to be careful that you are not run over by the guys rolling the clothes racks through the streets. The vendors generally do not sell to individuals - only retailers. However, Ricki knew some of the vendors and they allowed us into their stores. I don't think anyone bought anything though.

Garments are not the only things sold in this area. Sex is also for sale. Ricki told us before we got there that prostitution is legal in France. The prostitutes actually get benefits like vacation and retirement. They were easy to spot. They were well-dressed wearing expensive furs or leather, mini skirts, and high heels. They were all over this area of the city. Ricki told us there is no need to feel uneasy about being around all these working women. She encouraged us to say "Bonsoir" (Good Evening) to them as we walked by. We did and they would nod and say "Bonsoir" back to us.

We all hopped on a public bus with Ricki and headed to a section of town referred to as Little Africa. This area is inhabited by mainly immigrants from Africa. Just about every country in Africa is represented here. We went to an open-air market where all kinds of foods from produce to seafood was being sold. Just beyond the market were garmet shops, cafes, and beauty saloons. The market and cafes were starting to fill up because the sun had already set. It was Ramadan and many of the Muslims had been fasting from sun up to sunset. As we walked by the neighborhood mosque, we saw the men putting on their shoes and heading out into the streets. Ricki discouraged us from taking pictures because it is an insult to some of the members of the community to have their photo taken.

Our tour continued by taking a bus to Sacre Coeur. We took the tram up to the cathedral and got a great view of Paris at night. From there we rode an electric bus down the winding streets behind Sacre Coeur. The whole ride reminded me of San Francisco. When we got off the bus we were two blocks from the Moulin Rouge. Ricki gave us some history of the area and told us this was the end of the tour. We all said our goodbyes to our new friends and wished them a bon voyage (good voyage).

They all headed to the metro station. Traci and I wanted to take a picture of the Moulin Rouge before we left so we stayed behind. During the two-block walk to the Moulin Rouge we walked by a bunch of peep shows, X-rated video stores, and sex toy shop. Besides this, Traci and I just did not have a good feeling about this area for some reason. We eventually made it to the Moulin Rouge. There was a long line of people waiting to get in. We quickly snapped a picture of this famous dinner theater, put our cameras away, and quickly headed to the metro station. About a block from the station, we saw the police trying to settle some type of disturbance. There was a crowd gathering to watch whatever was going on, but not us. This place felt weird so we kept walking. 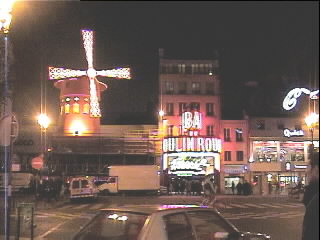 Thursday morning we checked out of our hotel and took the 8:13 Eurostar train back to London. We weren't sure what to expect when we got to London. President Bush was there to visit Prime Minister Tony Blair. We had been watching CNN and the BBC all week and saw the demonstrations and protests that were occurring in London because of the President's visit. There was talk of police blocking off streets and taking other security measures. We felt a little at ease because our train arrived in London at 10 a.m. and our flight was not scheduled to leave until 4 p.m.. We thought this would be enough time to get through any security checks or street closures.

Traci's job had arranged for a driver to meet us at Waterloo Train Station at 10 a.m. and drive us to Heathrow airport. As we rode through London we saw the protestors and the heavy police presence but, fortunately, no road blocks and heavy traffic. Our driver told us that it took one of his colleagues three hours to get out of the city the previous day. This was not a problem for us on this day. We were at the airport by 11 and our plane departed for Philadelphia promptly at 4 p.m.. The trip home was smooth and uneventful. It was a beautiful vacation. Paris Trip 2019