After Traci and I had gotten settled in our room, I called Percy's Place to make a dinner reservation. This restaurant was recommended by some of my co-workers (Thanks Evette and Kesha!) who vacationed in Paris a month earlier. Percy's Place had originally been open only for lunch; however, his restaurant had become so popular that he recently began serving dinner on Friday and Saturday nights. I knew the chances we would get a same day dinner reservation were slim but I gave it a try. To my surprise Percy answered the phone and said he had a cancellation and that he could seat us that evening. The evening became my most memorable of the entire trip.

Traci and I still had several hours before dinner so we headed out to do a little exploring on foot. Our hotel was around the corner from the Lafayette Galleries shopping district. There were blocks and blocks of stores dedicated to just about any designer name you could think of - Gucci, Dior, Versace, etc.. There were also cafes and restaurants galore. The thing that really struck me as we walked around was the amount of people and automobile traffic. The sidewalks were crowded with people walking in all directions. We were constantly bumping into people or trying to walk around them. If that's not enough, we also had to watch out for people riding mopeds on the sidewalks! There aren't very many available parking spaces in this area so people park their mopeds on the sidewalk.

Traci and I walked and browsed shops for hours. We eventually realized we had no clue how to get back to our hotel. We had a map but it was difficult to find street names as we walked around. Finding our hotel was not a major concern at the time because we knew that our hotel was located near Place de la Concorde and that we could get there from any metro stop. We attempted to find our way back on foot but gave up as we realized it was almost time for us to head to dinner. We headed to the nearest metro station, which happen to be Grand Boulevards, and took the metro to Percy's Place.

We arrived at Percy's Place in time for our 9 p.m. dinner reservation. The restaurant is small and probably seats no more than 30 people. There are autographed pictures of celebrities on the wall such as Will Smith and Sharon Stone. Percy's Place has a really warm and inviting feel to it. I felt like Percy had invited us over to his house for dinner.

Traci and I were greeted at the door by Percy and were seated at a table that seats eight. The other guests arrived a little later. 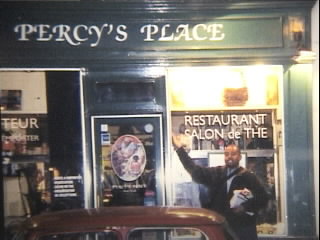 Percy was born and raised in the U.S. in Norfolk, Virginia. He has studied at culinary schools and practiced his craft all over the world. He now lives in Paris where he operates his restaurant. Percy combines down home southern U.S. cooking with exotic flavors and techniques from all over the world.

Our meal was very good. I had seasoned wings as an appetizer, barbequed spare ribs (the barbeque sauce was unreal!) and mashed potatoes as my main course, and an exotic key lime pie for dessert. I also had an interesting soft drink with my meal - cactus juice. It was green, tasted citricy, and a little bitter. I would drink it again but probably would not go out of my way to order it.

We enjoyed our meals but what truly made our evening so special were the nice people we met at Percy's Place. We met the couple seated beside us, Kim and Philipe. Kim grew up in Chicago, Illinois. Her career in dance had taken her to New York, London, and finally Paris where she has been living for over twenty years. She recently married Philipe, a native Parisian who works in the film industry. They were very friendly people. They had interesting stories to tell us about living in Paris. We enjoyed talking to them all evening.

We were also entertained by a wonderful singer named Stacy and an outstanding keyboard player whose name I've unfortunately forgotten. Stacy sang in English and in French. She sang to each person in the room and would occasionally put the microphone in our faces to join in. Audience participation was definitely the order of the evening. She would pull people out of the audience to dance and/or sing. She even had me up dancing like Michael Jackson. I'm so glad Traci could not get my video camera working in time. Otherwise, I would have had to put an embarrassing picture of myself in this trip report.

It seemed everyone in the room had some type of talent. There were two women at the end of our table who each sang songs in French and English. They had incredible voices. There was another woman who was skilled in Brazilian dance. There was also French male model, who goes by the name of Sharly, sitting at the end of our table. Not only did he have a nice voice, but someone had a copy of an advertisements he had posed for. This guy was definitely a hit with the ladies. Eventually, Percy came out and sang a song. He had everyone dancing and clapping their hands.

I went to talk to the keyboard player on one of his breaks to tell him I was really impressed with his skill. In the course of our conversation, I mentioned that I am also a keyboard player. Well wouldn't you know it, on the next set, Stacy, the singer, announced to the audience that I was going to play for them. I played Maple Leaf Rag, took a bow, and was about to go back to my seat when Percy grabbed the microphone and said, "Hold up, Brother. Where do you think you're going? I feel like singing some blues." I sat back down at the keyboard and began accompanying Percy as he sang the blues. The audience enjoyed it and we all had a ball. I guess you could call it my first international performance:). 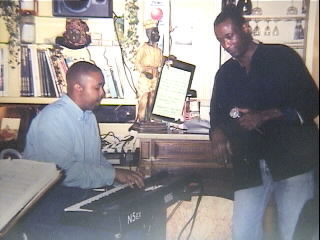 accompanying Percy on a blues song

Percy wanted me to accompany him on a gospel song after we finished the blues number but it was 12:15 a.m. and I knew that the metro was going to stop running soon. We said goodbye to Percy and all the other wonderful people we met. Kim and Philipe offered to drive us back to our hotel but I thanked them and declined since we had already paid for an aller retour (round-trip) metro ticket. I also didn't want them to have to deal with the constant traffic on the streets near our hotel. We all exchanged email information. Stacy, the singer, said she occasionally performs in the U.S. and will email us about her next performance in the States. Percy's Place turned out to be a great way to spend our first evening in Paris.

I'm not sure if we were still suffering from jet lag or if we were just plain tired, but we didn't wake up until noon on Sunday. It was a chilly, rainy day, so maybe that had something to do with it. We stopped by the concierge desk to pick up some brochures on Paris tours and Hop-On Hop-Off bus tours. The guy at the concierge desk told us to also consider getting a 3-day metro pass and exploring Paris on our own. We decided to choose this option because we could use the pass for sightseeing during the day and to go out to dinner at night; whereas, we only had transportation during the day if we went with the bus tours.

We purchased our three-day metro passes from the Concorde metro station later that evening. They gave us a metro ticket and Visit Paris package containing maps and discounted coupons to some of the attractions.

Traci and I did not have any concrete plans for the day. We grabbed our umbrellas and began to walk in the direction of the Eiffel Tower. It was about a 25-minute walk from our hotel.

The Eiffel Tower is impressive to look at up close. I enjoyed standing under it and looking straight up at its web of iron. There are four elevators, one in each leg, that ascend and descend the tower; although, not all of them go to the top. We bought tickets for the elevator that goes to the top. It makes stops at the first and second platforms at the base of the tower before heading to the top. There was barely a wait to board the elevator. I'm sure the rain had something to do with it.

It was cold, windy, and rainy at the top. We took a few pictures of the magnificent view from the top and then headed inside where it was warm and dry. There are souvenir shops, exhibits, and restaurants at each of the elevator stops in the tower. There is even a world-class restaurant at the second stage of the tower called Jules Verne. It has its own private elevator. People make dinner reservations at this restaurant months in advanced. I tried to get a dinner reservation at Jules Verne before we got on the elevator to ascend the tower, but the host chuckled and told me there was no way I could get a dinner reservation during my stay unless I had reserved a table months in advance. He pretty much gave me the same reply when I asked him about lunch, but I'll discuss Jules Verne later in this trip report. 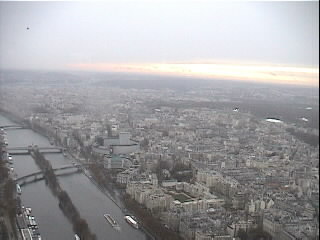 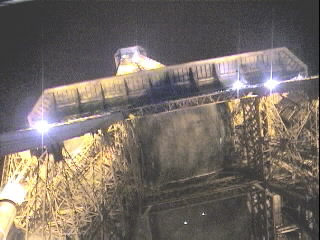 Traci and I spent several hours exploring the tower and its exhibits. Around 5:00, the rain stopped and gave us the opportunity to see Paris from the top of the Eiffel Tower as the sun began to set. It was a beautiful sight to see all the city lights illuminated beneath us. The Eiffel Tower is also adorned with thousands of lights. Sometimes the lights shine orange and other times the lights flash white in a random fashion making the tower appear to sparkle from a distance.

Where Is Pizza Hut?

Traci and I had not eaten anything all day so we were incredibly hungry. We took the metro to Grand Boulevards where we had seen all the restaurants and stores the night before. It was a totally different scene this evening, however. The place looked deserted. There were no huge crowds because many of the businesses are closed on Sundays.

Traci and I had seen a Pizza Hut when we were lost in this area the night before. I don't know what it is about Pizza Hut and being overseas. We rarely eat there when we are home, but seem to always have a craving for it when we are in a European country. Just check out my other trip reports and you'll see what I mean. Anyway, we decided we wanted Pizza Hut for dinner that evening and set out on a mission to find it. As we walked we kept saying, "I think it's just around this corner." At one point, we even saw a Pizza Hut delivery guy speed pass us on a moped so we knew we had to be close. After about an hour of searching, we realized we were lost once again. We ended up taking the metro back to Grand Boulevards and eating at the Hard Rock Cafe. 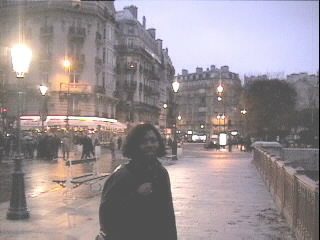 "Mike, are you sure you saw Pizza Hut around here?"

The concierge at our hotel helped us find a Pizza Hut later that week. We found out it was a take-out only restaurant when we got there, so we ordered and took the food back to our room. continue...