The next morning, we were back to our routine of breakfast, pack-up, check-out, and hit the road. We were delayed slightly because I noticed something hanging from the bottom of our rental car. It explained the strange rattle I heard while I was driving the previous night. Fortunately, it did not appear to be a serious problem. It looked like a hatch covering for maintenance access beneath the rear passenger door. I was able to simply screw it back in by hand.

Our first stop of the day was to a small, fascinating museum. It houses Michael Garman's Magic Town consisting of miniature models of city scenes containing hundreds of figurines. Mr. Garmin spent many years living as a vagabond in rundown sections of cities from Buenos Aires to Philadelphia yet spent millions recreating memories of his experiences in the form of miniature towns. He spent fifty years working on his detailed Magic Town which he began in 1975. His layout covers 3,000 square feet.

It's a fun visit made even more entertaining by doing the scavenger hunt included with your admission. Traci and I were each given a card containing a different set of four questions that we could only answer by observing the Magic Town closely. Not only does the exhibit contain figurines but holographic animations have been added. You might see them talking to you from alleyways, from behind bar counters, etc... Traci and I were able to answer our questions correctly. For the prize, we were permitted to pick a piece of candy from the candy bowl. I selected a pack of Now & Laters that brought back memories from my childhood. 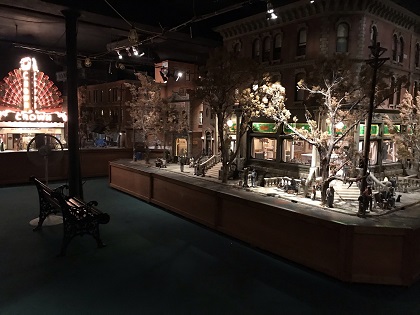 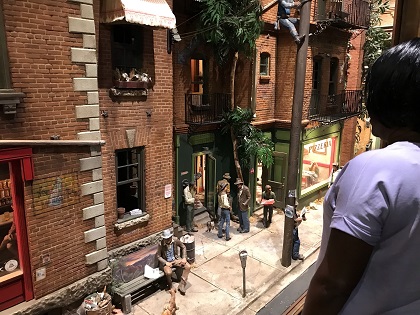 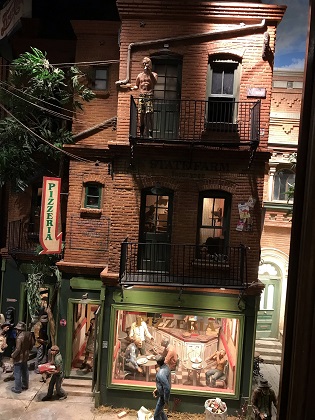 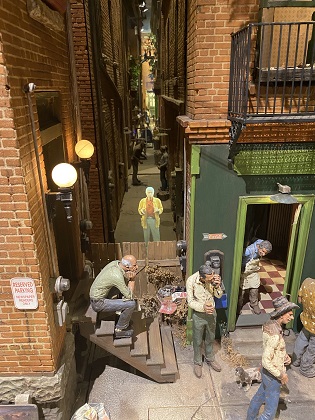 talking hologram in the alley

The location of the Michael Garman museum turned out to be a treat. It is located on Colorado Avenue in a touristy neighborhood called Old Colorado City. The street is lined with shops and eateries. We enjoyed a nice lunch at the Thunder and Buttons restaurant and then walked down the street to the Front Range Barbeque restaurant to have a Key lime pie dessert. This was one of the few times during our trip that we actually made time to eat lunch. Continue...