With our bellies full, we got in the car to leave for our next city - Breckenridge. It was about an hour and a half drive from Colorado Springs and the drive was spectacular. Part of the drive was on curvy mountain roads that I imagine would be quite treacherous in the wintertime. I could tell that we were gaining altitude by that strange sensation in my nose.

Searching for the Troll

Breckenridge is nestled in the mountains. Its Main Street looks like the set of a Hallmark movie. Breckenridge is known for skiing in winter but our summertime visit had more of a vacation vibe than any of the places we visited during this road trip. The main street was bustling with tourists.

For this leg of the trip, we were staying at the Residence Inn Breckenridge. We were very pleased with our stay here. It is conveniently located at the end of Main Street.

The first thing I wanted to do was a fun activity that I read about on the Internet - that is, to find the Breckenridge Troll. We followed the directions we found online and made our short trek into the woods to find Isaak the Breckenridge Troll. This 15-foot structure is made of wood and is impressive. We had fun taking pictures with Isaak as we chatted with a family visiting from Denver.

Searching for Isaak the Breckenridge Troll 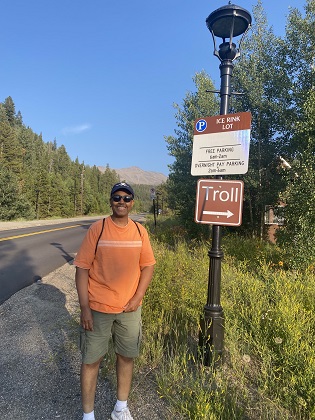 "I think we are going the right way."

We spent the rest of the day strolling Main Street and reading the posted menus of the variety of restaurants. We settled on Michael's Italian for a tasty dinner and then walked to a cookie shop so that Traci could satisfy her after-dinner sweet tooth. The elevation of Breckenridge is around 9,600 feet and thus the temperature dropped considerably after sundown. It felt strange to be wearing a jacket in the middle of August. Despite this, the lines at the ice cream shops on Main Street extended out of their doors.

Strolling the Streets of Breckenridge 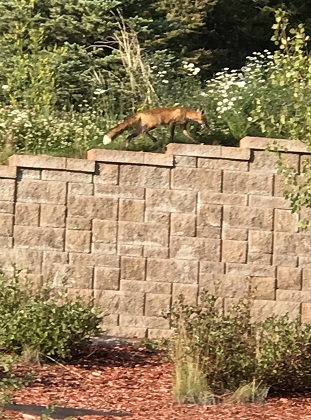 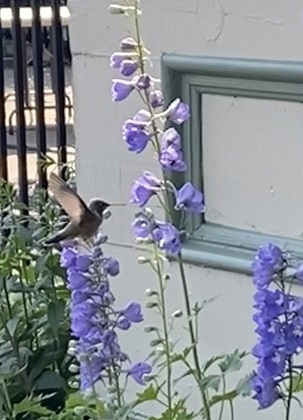 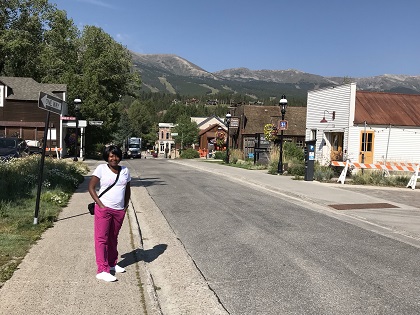 Traci and I managed to make it back to our hotel before 9 PM - a rarity. This worked for me since I was starting to get a mild altitude headache.

After a good night's sleep, my headache had subsided and I was ready for more sightseeing. The reason I added Breckenridge to this road trip was so that we could visit the Barney Ford House Museum. Barney Ford was born into slavery in Virginia in 1822. He eventually escaped and made his way out west where he became a successful entrepreneur. One of his former homes is located in Breckenridge and is now a museum. Traci and I arrived at the house when it opened at 10 AM. The man who guided us through the house was a wealth of knowledge of the life of Barney Ford. He told us about Mr. Ford's successful business ventures as well as the failed ones. I was amazed by how resilient Barney Ford was in the face of adversity and how much he traveled back in those days. We thoroughly enjoyed our visit and the stories that the guide told us. Apparently, there was a PBS documentary made on the life of Barney Ford. I will definitely have to check it out. 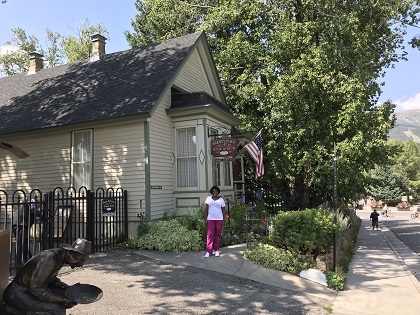 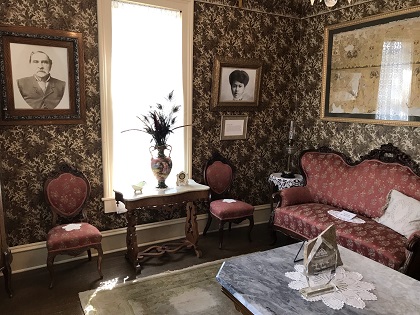 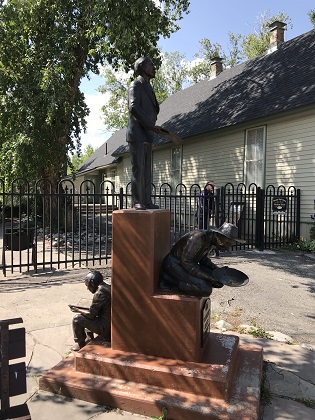 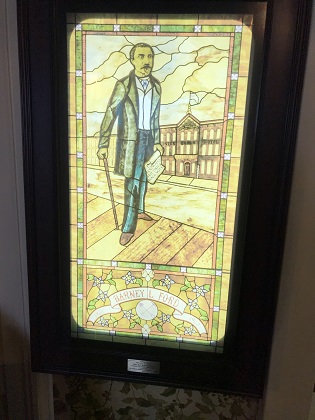 From the Barney Ford House, it was on to our next excursion. I knew there was quite a bit of gold and silver mining in Colorado back in the day. Since I have never seen an actual gold mine, I decided to book us for the 11:30 AM gold mine tour offered by Country Boy Mine located a short drive from Main Street of Breckenridge. Arriving at the site is impressive with its old western style wooden buildings surrounded by the beautiful Rocky Mountains. This was the first day that the California wildfire smoke had thinned enough for us to see a few mountain tops.

The tour would take us deep into the Country Boy Mine which was in operation from 1887 through World War II. Before we could enter the mine, we needed to wear one of the supplied hard hats. It was also recommended that we wear a jacket because the temperature inside the mine is 48° Fahrenheit. Our guide did an excellent job explaining and demonstrating the hardships the miners faced. They would spend up to 10 hours per day in these dark, damp tunnels chiseling away at the rocks by hand so that dynamite could be set. Children were used to place the explosives in the chiseled holes because of their small fingers. We were shown some of the advancements in technology such as a steam-powered drill from the early 1900s. The thing still works today. In fact, our guide let me try it out. Despite the advancements, miners often did not live more than three years after they began working in the mine because of the toxic dust. The conditions in the mine back then were terrible. For our tour however, we had conveniences such as hanging lights and oxygen being pumped into the tunnel.

There were some families in our tour group that brought their young children along. In many cases, this turned out to be a bad idea. The children were frightened by the darkness of the tunnel. Several of the parents had to abandon the tour to take their crying kids out of the mine.

Our tour finished at a stream outside the mine where our guide demonstrated techniques of panning for gold. You can still find small flakes of gold in the stream today if you are lucky. Traci and I did not participate in the panning for gold. We had already done that in Alaska many years ago. I enjoyed the gold mine tour, but it was not a highlight for Traci. She prefers touring beautiful caves instead of mining tunnels. 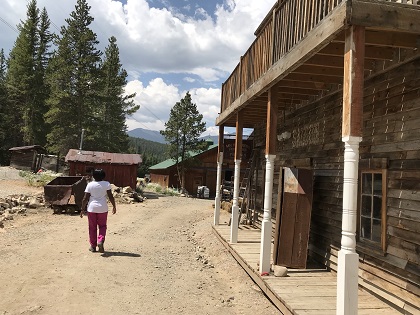 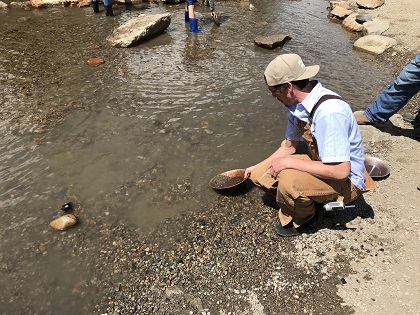 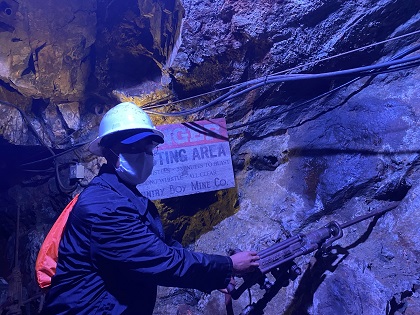 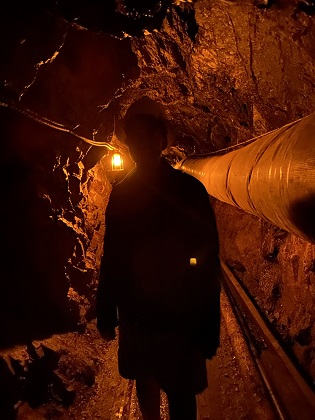 Gondola Ride? I Think Not

The final thing we wanted to do in Breckenridge was to take the free aerial gondola ride up one of the 12,000-foot mountains. Unfortunately, gondola rides were just not in the cards for us on this road trip. We had had nothing but sunshine since we arrived in Colorado; however, just as we were heading to the lifts, the skies began to darken. As a result, the gondolas were shut down due to the threat of lightning. With that, we said goodbye to Breckenridge as we continued on with our road trip. Continue...