We had planned to spend 3 nights at the Fairfield, but it felt like a step down from where we stayed in Golden. There was nothing terribly wrong with the hotel and we probably would have been fine with staying there for 3 nights but we decided to see if there were other Marriott properties in the area. Traci went online and found a Residence Inn on the other side of town. It was even less expensive than where we currently were. Therefore, we made plans to check out of the Fairfield in the morning before heading out for our planned excursion.

The next morning, we had the Fairfield's complimentary breakfast which consisted of scrambled eggs, Canadian bacon, oatmeal, and fruit. There was no waffle station at this hotel. We packed up, checked out, and loaded up the car.

Garden of the Gods

When researching things to do in Colorado, the Garden of the Gods was an attraction mentioned often. If nothing else, the name sounded awesome. The Garden of the Gods is Colorado Spring's free city park whose most notable feature is its large red rocks that tower over the landscape. There are paved trails allowing visitors to walk amongst the rocks and vegetation. There are also several activities available such as e-bike tours, Segway tours, rock climbing (permit required), mountain biking (in designated areas), and hiking of course. Additionally, there is a visitor center containing park exhibits, films, and eateries.

Knowing that we could potentially be in a bit of a time crunch that day, I had pre-booked a guided nature tour of the park. We met our guide at 10:30 AM. He led us along the paved pathways of the park showing us the native plants as well as invasive species that were introduced to the area. One of the more interesting plants he showed us was a plant that has adapted to the dry climate by acquiring the ability to dig into the ground and plant itself. He had each of us hold a small stem. When he wet it with a few drops of water, the pointy stem began to uncurl and elongate. As it dried, it curled up again. This motion allows the plant to dig itself into the ground over time.

Our guide talked about the geology of the park and its peculiar red rocks which are millions of years old. Some rock formations looked like animals such as an elephant, a camel, etc... Others had names such as Cathedral Spires, Balanced Rock, etc... due to their shape. Our guide was enthusiastic and kept the tour fun. He even gave out prizes if you could answer some of his trivia questions. Traci and I each got stickers as prizes for our answers. One of the best moments of the tour was when our guide, an older white gentleman, suddenly began speaking to the Filipino visitors in our group in their language! The huge smiles on their faces were priceless. 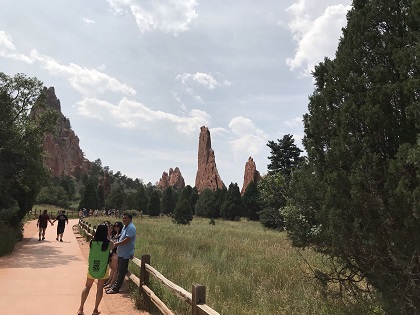 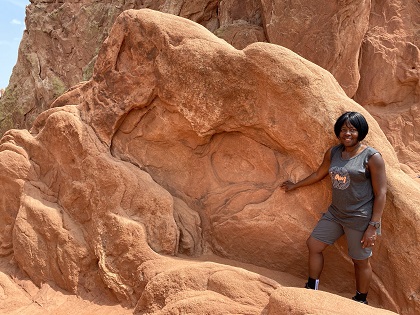 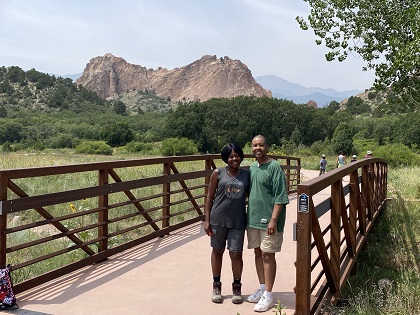 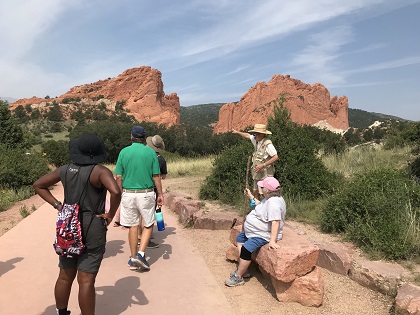 I really enjoyed our guide and the nature walk. Like the other guides we would encounter during our road trip, he was passionate about his job - so much so that he turned our scheduled 1-hour tour into a 1 hour 45-minute tour. This meant that afterwards, Traci and I only had enough time to walk back to the visitor center to use the restrooms and then get on the road to our next destination for the day by the recommended time.

Our second destination for the day was the summit of Pikes Peak which stands at 14,115 feet. You can drive to the top of the mountain, but I did not want to do this because as the driver, I was afraid I would miss out on the scenery while negotiating the curvy road. Spending several days doing a challenging hike to the summit and back was definitely out of the question. Fortunately, we had another more convenient option - the Pikes Peak Cog Railway. This train has been taking visitors to the summit from the town of Manitou Springs, Colorado since 1891. It had recently reopened after being closed in 2018 for renovations. I had booked our reservations for the cog railway online two weeks before arriving in Colorado. The confirmation emails I received strongly advised arriving at least an hour before your scheduled departure time because of the limited parking situation in Manitou Springs. The emails warned it might be necessary to park in a satellite lot and take one of the free shuttles to the train station. Our departure time was booked for 2 PM which meant we should plan to arrive by 1 PM. I tend to be a worry-wort when it comes to sticking to schedules so I was a little panicked when Waze indicated we would arrive in Manitou Springs around 1:15 PM assuming I did not make any wrong turns. Everything worked out for the best. In a different email I received from the cog railway, it was recommended to not arrive earlier than 30 minutes before your departure because you would not be allowed to park in the parking lot across the street from the station before then. We had no problem parking in this lot.

The train ride was a pleasant, narrated 1:10-hour trip to the top. We were required to wear a mask while on the train. We traveled through mainly forest where we occasionally saw a waterfall and even a few houses. As we got closer to the summit, we saw mainly rocks and boulders. I spotted a few marmots (fluffy ground squirrel) scurrying along these rocks. Traci and I realized we should have reserved seats on the left side of the train when facing forward because the people seated on that side had the best elevated views of the valleys and lakes below.

We were given only 40 minutes to walk around at the summit of Pikes Peak. The views were breathtaking. In fact, the views from here were the inspiration for the song "America the Beautiful". It was recommended that we bring extra layers because it can be chilly at the top of the mountain. We did not need our extra layers that day. The cooler temperature at the summit was a pleasant relief from the heat we experienced at lower altitudes.

Traci and I had a look inside the newly-opened Summit Visitor Center. We bought two of the famous Pikes Peak Doughnuts. Apparently, you must eat them at altitude. Otherwise, they turn to mush at lower elevations. We enjoyed the cinnamon sugar doughnuts before our 1-hour ride back down the mountain.

Trip to the Summit on the Pikes Peak Cog Railway 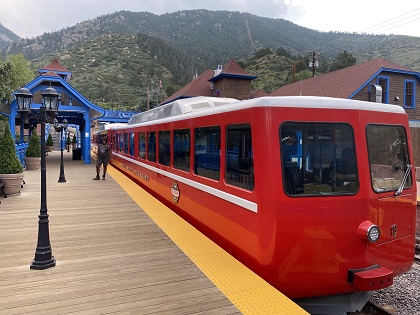 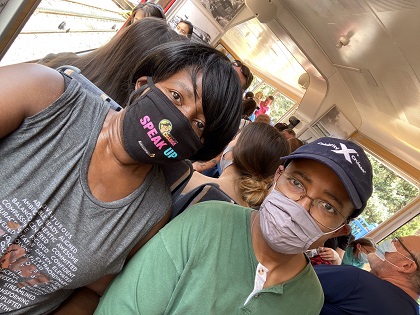 masks required while on the train 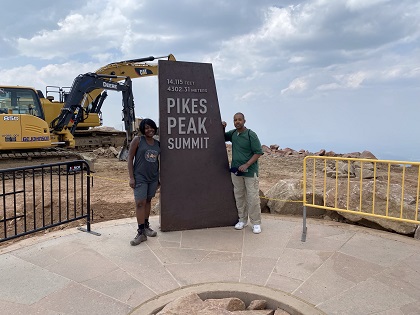 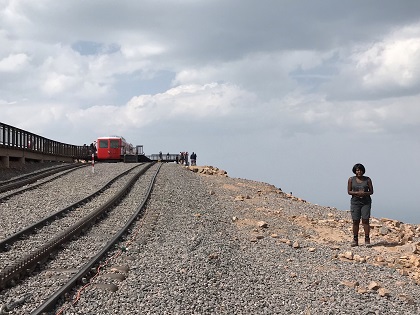 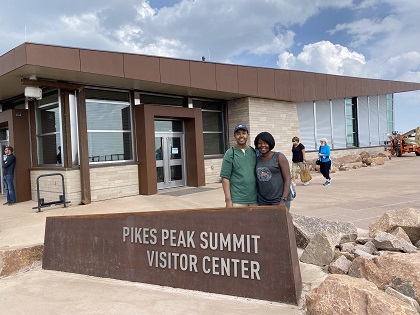 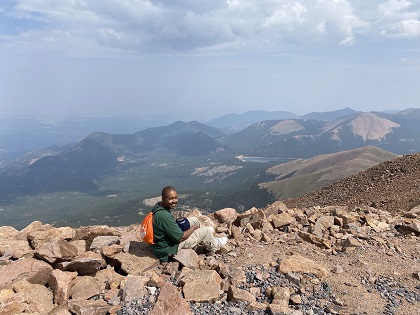 Speaking of altitude, I found out my body is not a fan of it. In the short time at the summit, I began to get a nasty headache. I felt light-headed. My coordination was slightly off. Additionally, it seemed like my brain was working slower. However, the strangest symptom was the weird sensation I got in my nose. I had a similar sensation when we climbed Mount Kilimanjaro back in 2015. It is hard to describe but I know it when I feel it. For the rest of our road trip, I always knew when we were in a high-altitude city or town by the feeling I got in my nose. Traci had no problems with altitude. Most of my symptoms subsided as we descended the mountain except for the headache. It lasted the rest of the day.

Despite my touch of altitude sickness, I enjoyed the opportunity to see Colorado from such a unique vantage point. The one thing we wish we would have done differently was reserve a seat on the left side of the train for the better views. I thought maybe we would be looking out the opposite side of the train on the way down but that was not the case. Traci wished we could have spent more than 40 minutes at the summit. I'm guessing they limit your time at the top because of people like me who are prone to altitude sickness. The friendly guide on the train who made sure to have a conversation with all the guests on the way down the mountain told Traci and me about the time they had a maintenance problem with one of their trains. He said the passengers had to wait at the summit for two hours while another train was sent to retrieve them. The guide told us that there were a lot of cases of altitude sickness that day.

Pikes Peak was our last activity for that day. It was close to 6 PM by the time we were leaving Manitou Springs and we were very hungry. Aside from the two doughnuts we shared at the summit, we had not eaten anything since breakfast. We used Traci's phone to browse menus on OpenTable.com. We decided to try a restaurant called Streetcar520 in downtown Colorado Springs. Our dinner at that restaurant was our favorite dinner during our entire trip. Traci and I broke our rule about not ordering seafood when we are in a place that is not close to water. In this case, I'm glad we did. I had the shrimp etouffee and Traci had the seared barramundi (Australian fish). We then went on to share the delicious caramel churro for dessert.

On the way to our new hotel, we made a stop at a Walmart so that Traci could return a damaged product she bought a few days ago. I knew that there was a nationwide labor shortage, but I had not thought much about it until we visited this Walmart. Traci was not able to return the product because there was no one to work the customer service desk. This is a pattern we would observe throughout the rest of our trip.

Well, once again we failed at our attempt to finish our day before 9 PM. It was after 9 when we checked into our new hotel in Colorado Springs - Residence Inn Colorado Springs First & Main. This was one of only two hotels during this road trip at which we spent more than one night. We were booked here for two nights. It was a new hotel and we liked it much more than the Fairfield Inn where we stayed the previous night. Continue...