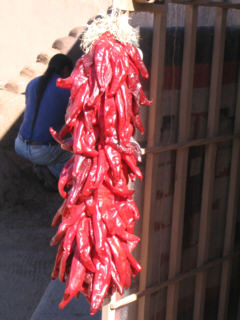 The Land Of Enchantment

Our flight from San Diego, California to Albuquerque, New Mexico was an hour and 40 minutes. We picked up our black Hyundai Sonata rental car as soon as we landed and drove off to explore New Mexico - The Land Of Enchantment.

This was our first time in the state and I must say, I was blown away by the huge landscapes and fascinating culture. The state is an interesting blend of Indian (Native American) and Spanish culture. The Indians had settled here thousands of years ago and lived in communities called pueblos. There were 19 pueblos that thrived in what is now New Mexico. The Spanish Conquistadors arrived in the 1500's looking for gold followed by the Spanish missionaries with a mission to convert the Indians to Catholicism. Over the years, these encounters between the Spanish and the Indians became bloody. As a result, the Indians suffered heavy casualties and eventually abandoned their pueblos or submitted to the often oppressive rule of the Spanish.

The plight of the American Indians had a similar ending all over what is now North America, but what makes the Indians of New Mexico so unique is that their communities still flourish today. Their pueblo territories encompass large expanses of land. We often saw signs indicating we were entering or leaving a particular pueblo during our week-long road trip through the state. Some of the ancient languages are still spoken. The Indians also have a huge influence on the state's culture, art, and government. Most of the buildings we saw were architected to mimic the adobe brick (mixture of brown soil, straw, and rocks) buildings in which the Indians lived. Even McDonald's and Denny's were built in this style.

On the other hand, the influence of the Spanish who were eventually defeated by the expanding United States can still be seen throughout New Mexico. Spanish is widely spoken. Many of the cities and street names are Spanish. The towns have central plazas or squares typical of the early Spanish settlements. Having lived all my life on the east coast of the U.S., New Mexico felt another country.

Our base of exploration for the next three days would be Santa Fe, the capital city. Before making the hour long drive from Albuquerque to Santa Fe, I thought it would be a good idea for Traci and me to educate ourselves on the Native American culture we would encounter during the week. For this reason, our first stop was the Indian Pueblo Cultural Center in Albuquerque.

The Indian Pueblo Cultural Center is a circular museum whose purpose is to educate the visitors on the 19 pueblos of New Mexico. My AAA membership card got us a $0.50 discount on each admission ticket. The museum has a permanent exhibit, temporary exhibits, a gift shop, cafeteria, and a circular courtyard. We were lucky to be there on a weekend day (Sunday) because this is when the dancers perform in the courtyard. We had arrived at the museum about 30 minutes before the show, so we first spent some time walking through the "Corn To Commodity" temporary exhibit that highlighted the importance of the corn crops in pueblo societies. 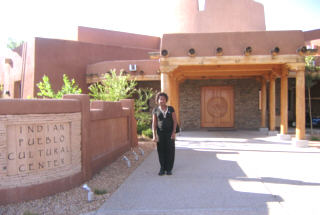 The dancers we saw were from the Zuni Pueblo. The performance began with a drummer and a chanter. As they began to drum and chant, the dancers (two men and two women) dressed in colorful, elaborate traditional garb entered the circle carrying arrows. They proceeded to perform the Arrow Dance which looked like they were jogging in place. Other than facing different directions and an occasional simultaneous dip, there did not seem to be much more to this dance. This went on for 20 minutes. After the first 10 minutes Traci leaned over and whispered, "I'm going to the gift shop."

I stayed until the end of the Arrow Dance and then joined Traci in the large gift shop. The music, art, pottery, and jewelry of the pueblo Indians are sold here. The Native Americans in this area are especially known for their beautiful pottery and for their jewelry made of sterling silver and turquoise stones. Traci had already made the first of several jewelry purchases she'd make during the week. By the end of our vacation, she said she'd definitely made her contribution to the New Mexico economy.

Exiting the gift shop, I noticed the dancers had started their second set with even more interesting costumes. This time, the two male dancers were wearing deer antlers on their heads and walking with two straight canes. They were hunched over and doing a kind of step-and-stoop move. The two women were still jogging in place. We paused for a few minutes to watch but then kept moving. 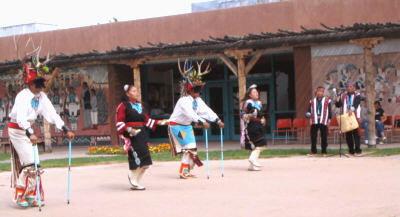 When we first entered the museum, we were told there would be a cooking demonstration using a pueblo oven called a horno. These dome-shaped, adobe ovens are typically used to make bread. By the time we got to the location, the demonstration was over and the bread was gone. However, just like my experience in San Diego, the people in New Mexico are so friendly and kind. Upon learning that we missed the demo, one of the museum staff shared with Traci and me her loaf of bread she had bought from the cooking demonstration. The bread was hard and crusty on the outside but soft on the inside. I would have loved to have tasted it hot out of the horno but at least I had the opportunity to taste it.

Having teased our appetites with the bread, we decided to have lunch in the cafeteria. The menu was mainly Southwestern cuisine which I don't really care for. Traci had chicken fajitas and I had a cup of pinto beans and ham. The thing I enjoyed most about this meal was my first encounter with Indian fry bread. It was included with my beans and ham. 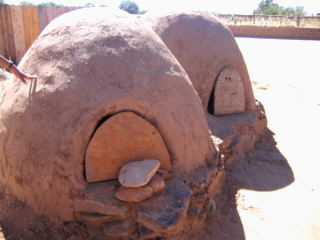 Indian fry bread is basically fried dough but it is a little lighter and crispier than funnel cake. It is served with honey. My 'small' order was so big it hung over the sides of the plate. Traci and I started on this lovely treat and before long, we were left with nothing but sticky fingers and fry bread flakes.

Our final stop in the museum was the permanent exhibit on the bottom floor. Through artifacts, craftwork, and models it explained the emergence of the pueblo Indians thousands of years ago, the pueblo architecture styles, the arrival of the Spanish, Indian uprisings, and today's Native American culture. I was most impressed by the final section of the exhibit that has displays dedicated to each of the 19 pueblos. It describes their artwork, tools, location, and clothing. For example, the people of the Zia Pueblo are known for their white and orange pottery. The Santa Clara Pueblo Indians are known for their black animal figureens. Some pueblos built their homes out of adobe bricks and others made cliff dwellings by carving their homes out of the soft volcanic rocks. Comparing and contrasting these cultures was fascinating to me. This exhibit had really made my trip to the Indian Pueblo Cultural Center worthwhile.

We stayed at the museum until its 5 PM closing time and then got in car for our hour drive to Santa Fe. On the highway leaving the wide, sprawling city of Albuquerque, we got our first glimpse of the desert landscape dotted with short, stubby trees and bushes. It seems to extend for hundreds of miles with brown rocky mountains in the distance. Continue... 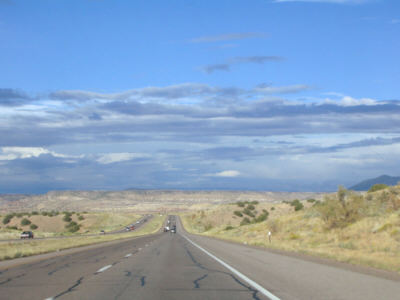