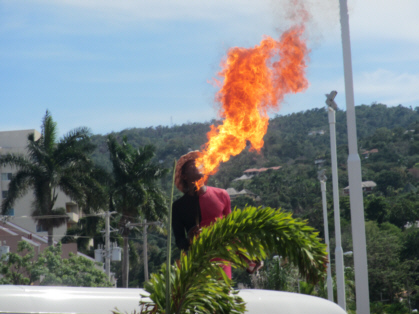 Since the weather forecast for our planned stop at Grand Cayman, Cayman Islands was not so good, our itinerary was changed to Ocho Rios, Jamaica as our last port of call before returning to Florida. Traci and I have been to Jamaica at least five times - sometimes on a cruise and sometimes as a vacation destination. We had done tours and shore excursions on the island in the past. This time, we decided not to do any. Our plan was to get off the boat for no longer than an hour or two and just have a look around. Traci and I ended up being ashore much longer than we had anticipated.

The heat really smacked us in the face when we exited the ship. The white cement of the pier seemed to be intensifying the already intense sunshine. We browsed the souvenir stands at the end of the pier and wandered into the shopping village where there were air-conditioned shops selling pretty much the same items. We entered one of the stores and saw many passengers from our ship looking into their mobile devices. This was an indication that there is Wi-Fi available. Free Wi-Fi is a highly sought-after convenience since it is ridiculously expensive while at sea. A fellow passenger gave Traci the passphrase and she joined the others who were reuniting with their mobile devices. She ended up spending over an hour in the store dealing with the painfully slow connection. She could see that she had received an email from our next door neighbor who was keeping an eye on our house while we were away but the slow connection was preventing Traci from seeing the actual email message.

The Margaritaville restaurant in the shopping village was one of the more lively spots. In addition to the restaurant and bar, there is a swimming pool and beach on the premises. A live DJ helped keep the party mood. He played a few line dance songs and many people, including Traci joined the dance. The Wi-Fi connection was much faster at Margaritaville so Traci was finally able to read the email she received from our next door neighbor at home. She wanted to let us know she picked up the package that was delivered to our house. 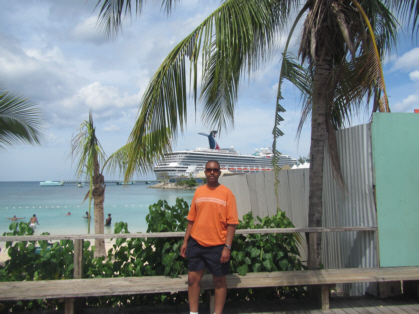 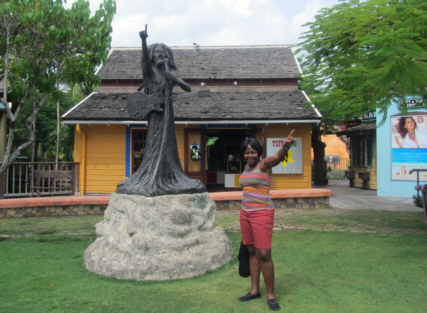 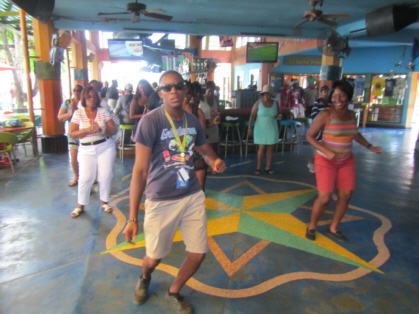 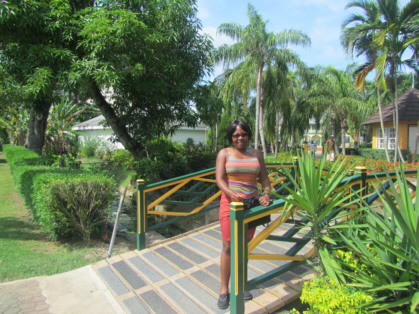 We left Margaritaville and took a walk along Main Street towards downtown Ocho Rios. There were taxis available to take passengers there for about $5 but the walk took us maybe 10 - 15 minutes. The busy area seemed to cater mainly to tourists but I saw quite a few school children walking the sidewalks in their uniforms. It had been 19 years since Traci and I last visited downtown Ocho Rios. Some things were a bit different than I remembered such as many of the shop merchants now seem to be of Indian descent. However, there were many things about the area that seemed to not have changed at all. Traci was surprised that I still remembered where the Burger King was. The street vendors and a few of the shopkeepers are much more aggressive than were the vendors in the shopping village near the cruise terminal. I've found that when someone approached us with one of these sales pitches, our best strategy was to politely say, "No, thank you" and keep walking.

As Traci and I walked the streets, we were engaged by a familiar cast of characters just like we were 19 years ago. There was the guy who wanted us to follow him to another section of town to 'support the black merchants'. We did not follow him. There was the man who approached us in hopes of selling us reggae music. The only difference this time is that he was selling custom CDs instead of the cassette tape I bought the last time we were there. As much as I love reggae music, I had to pass on his offer because I download my music these days instead of buying CDs. And then, of course, there was the man who greeted me with a fist bump and a "My brother...". He wanted to know if I wanted to buy some weed. At that point, I knew I was in Jamaica. This has happened each of the five times I have been to the island. I politely declined his offer.

Traci and I wandered in and out of shops. We also walked through the outdoor craft market. Many of the same items we saw at the shopping village and in the air-conditioned shops of downtown were being sold there. The only difference was that the merchandise was being sold under tarps and corrugated tin roofs. Also, the craft market merchants were more aggressive but at the same time more open to haggling. Traci was searching for a red shoal that she could wear to keep her warm at the evening concerts on the ship. When Traci goes into shopping mode she goes through the shops with laser focus. In fact, she was so focused that she did not even notice the two men who were in a heated argument. They each had a club in their hand and were taunting the other to come closer. All Traci saw was that one of the men was blocking the entrance to the store she wanted to check out. She walked up to him and said "Excuse me". I quickly grabbed her arm and pulled her away from the two gladiators that were about to do battle. Fortunately, some other men ran over to diffuse the situation before the two came to blows.

We began our walk back to the ship since it was getting close to boarding time. Again, you do not want to miss the final boarding time. The ship will not wait for you! On the way back we took a short walk through the beautifully manicured Turtle River Park. Anxiety was starting to set in as I realized we still had at least a 10-minute walk ahead of us with final boarding in 20 minutes and Traci still wanting to check out more shops. Fortunately, a crossing guard was able spark that sense of urgency that was needed to abandon the idea of more shopping. As he stopped traffic so that we could cross the street, he pointed at a clock and told us to pay attention to the time.

We made it back to the ship on-time and to Traci's credit, there was such a long line to board that she probably did have enough time to take a look in the shops she wanted to see but I was not willing to take that chance. Anyway, it felt great to be back on the ship. It was one of the few times for me that the cranked-up ship air condition felt so relieving.

After a quick lunch on the Lido Deck, Traci went to Patti LaBelle's cooking demonstration in the lobby. She said Patti was not actually doing the cooking but was there to promote her spices. I, on the other hand, went to the International Lounge to catch the 4 PM performance of bassist Nathan East of Fourplay. It was a really nice performance that included guest musicians such as pianist, Bob James and flutist Ragan Whiteside.

Our after-dinner concert lineup began with an 8 PM International Lounge performance of the female group Jazz in Pink. Afterwards, we went to the 9:15 concert in the Victoriana. The show began with Lalah Hathaway. I was once again blown away by her rich voice and scatting abilities. At one point, I could have sworn I heard her sing two notes at the same time. Is that humanly possible? Her set was followed by R&B singer Raheem DeVaughn. 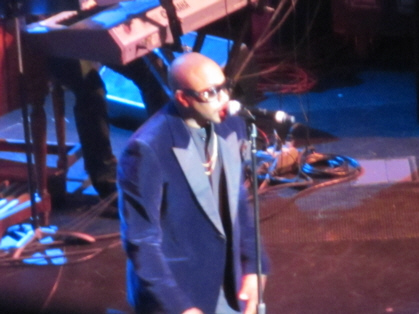 The Victoriana concert finished up around 11:45 PM. Traci headed back to the cabin to turn in for the night. Even though I too was ready to go to bed, I decided to go to Lido Deck and have a hot dog at midnight - just because I could. I had wanted to do this earlier in the week but did not want to wait in the long buffet line just for a hot dog. The pizza line always moved much faster so I normally settled for that. Realizing that the cruise was coming to an end, I decided to make that night my hot dog night.

Back in our cabin, I saw one of the best concerts of the week on the TV. The concert was being broadcast from the International Lounge. It featured boat load of talented musicians who had performed on the ship that week. If I was not already in my pajamas, I would have gone down there to see it live. There was some serious jazz improvisation going on - incredible! I watched it from our bed until it ended at 2 AM. Continue...