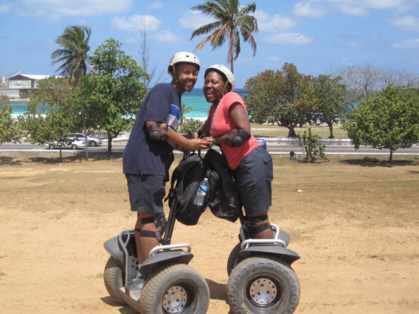 Traci and I participated in our third One Love Gospel Cruise. This was the seventh year Radio One has hosted this cruise and I am happy to see that so much has changed for the better since we first went in 2006. The cruise is now jam-packed with activities and award-winning gospel artists. All in all, the cruise was a nice spring getaway.

As the saying goes, "My how time flies". We had booked our cabin on the Radio One - One Love Gospel Cruise 2011 in July 2010. Before we knew it, we were packing for the 5-night Caribbean cruise. It felt strange to be pulling out summer clothes in April but we knew we were leaving the 40-degree DC area weather for the 80-degree weather of the Caribbean. We planned to wear shorts during the day and theme night or resort casual clothing in the evenings. The theme nights on this cruise are simply an opportunity to wear attention-grabbing clothing and to have your picture taken by the ship's photographers. Participation is optional. With the exception of White Night, there were no parties or parades celebrating the themes. The theme nights this year were: 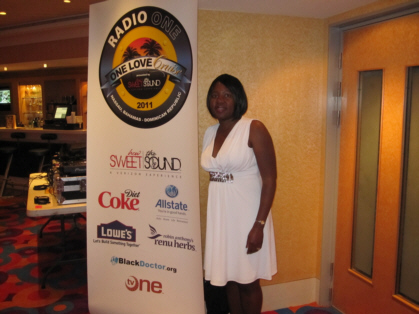 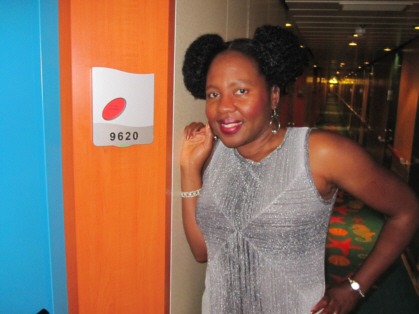 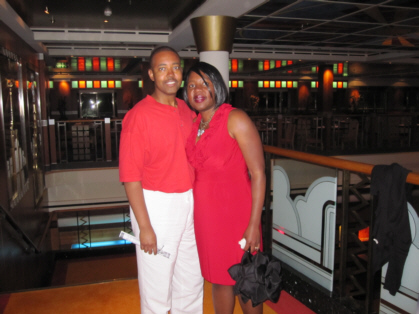 Experience has taught us to arrive for a cruise at least the day before to reduce the chances of missing the ship because of missed or delayed flights. We flew JetBlue from Washington Dulles Airport to Fort Lauderdale the day before embarkation. We chose JetBlue because, like Southwest Airlines, there is no charge for your first checked bag as long as it is under fifty pounds. This was my first time flying JetBlue and it was a nice experience. I liked the ability to watch TV, in addition to movies. The only downside for flying this airline for us is that it does not fly to Miami. Therefore, upon arriving in Fort Lauderdale, we checked into the SpringHill Suites Fort Lauderdale Airport & Cruise Port Hotel. We had enough Marriott points to earn us a free stay.

We actually stayed at this hotel last year before embarking on the Tom Joyner Fantastic Voyage Cruise. This year I noticed that the hotel has appended "Cruise Port" to their name. I thought this was a smart move. Having already stayed at the hotel, we had already worked out our strategy for getting to the Port of Miami without having to pay for ground transportation. The SpringHill Suites provides a complimentary shuttle to/from the Fort Lauderdale Airport and Norwegian Cruise Lines provides a complimentary motor coach between the Fort Lauderdale Airport and the Port of Miami.

Having checked into the SpringHill Suites, I felt like my vacation had begun. Traci, on the other hand, was having a hard time detaching from work. She spent the afternoon on her laptop. She eventually took a break and we walked across the street to the shopping center. We had dinner at Miller's Ale House again this year, but unfortunately, it was not nearly as good as last time.

The morning of the cruise, we enjoyed the hotel's complimentary breakfast buffet. It seemed like every guest at the hotel was in the small dining area at the same time. Traci and I brought our food back to the room because of lack of seating. Before long, it was time to head to the lobby to catch the 10 AM shuttle. Once again, it seemed like everyone in the hotel had the same idea. I waited on the 7th floor for 15 minutes for the elevator to arrive. I was kicking myself because I did not follow my lesson-learned of always requesting a room on the second floor of a cruise hotel so that I can walk our luggage down to the lobby if necessary.

The shuttle let Traci and me off at the Arrivals section of the Fort Lauderdale Airport where we met Norwegian Cruise Lines representatives in the baggage claim area. They grouped us with other passengers and led us to the motor coach that would shuttle us 30 minutes to the Port of Miami. Traci and I were hoping to carry our own luggage onto the ship like we normally do but the Norwegian Cruise Lines representatives were rather insistent that we leave our luggage with their handlers who would load the bags onto a truck and deliver them directly to our ship cabin. Therefore, we boarded the motor coach with only our carry-on bags.

It took Traci and me about 30 minutes from the time we arrived at Port of Miami until we actually boarded the ship. We went through the normal process of check-in, security, and photos. We had a glitch when Traci's backpack was scanned. The security officers confiscated the banana and orange she got from the hotel breakfast buffet. Food items such as fruit, vegetables, and meat are prohibited from being brought onto the ship.

Norwegian Cruise Lines is serious about health and safety. Every time we boarded the ship, there was an employee spraying each passenger's hands with what I assumed to be antibacterial.

The ship cabins were not ready when we boarded so we made our way to the main dining room for lunch. The buffet on Deck 12 was also serving lunch but Traci prefers her food to be served as opposed to getting it off of a buffet.

The announcement eventually came indicating the ship cabins were ready. This was our first time on Norwegian and I have to admit our first impression was not so great. I am not sure if this was an issue with the cruise line, the ship, or our cabin steward (who we never saw during the entire cruise). There were stains on our comforter, soap scum in the shower, streaks on the mirror, and dirty glass on our balcony. We submitted a written complaint immediately. The cabin was cleaned but for the rest of the week we had to call housekeeping for towels and wash clothes almost every day. It normally took hours for these items to be delivered - if they were delivered at all.

I make it a habit of bringing my small travel iron with me. This turned out to be a good idea on this cruise. I heard from other passengers that there was sometimes a long wait to have one of the ship's irons brought to their cabin.

Although the first impression of our cabin was not a good one, the room did have some nice features. The bed was high enough to slide our suitcases under. The bathroom was a typical cruise ship small bathroom but it was still large enough to have separate sections for the toilet, shower, and sink. There was decent closet space as well. I enjoyed sitting on our balcony most of all. We saw some awesome sunsets from there. 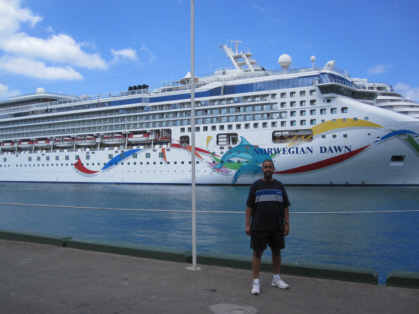 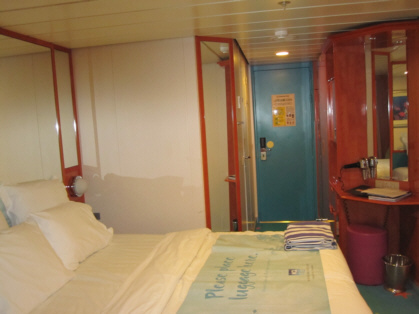 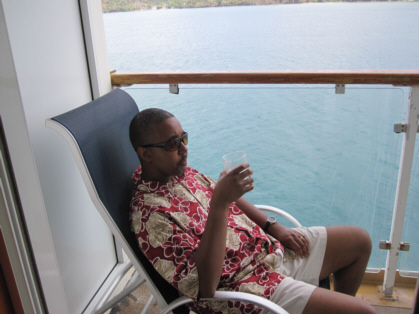 I loved relaxing on our balcony. 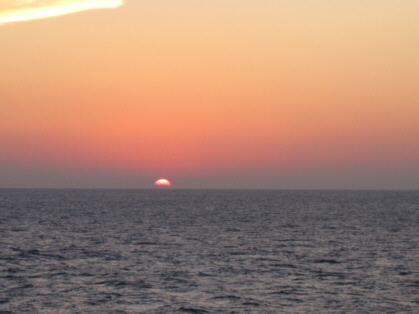 We loved watching sunsets from our balcony.

Our luggage had not arrived in our cabin yet. It would not arrive for another two hours. This was to be expected. In the meantime, we decided to explore our ship, the Norwegian Dawn. It has a capacity of 2224 passengers. Once again, the women greatly out-numbered the men. The few of us men who were there were with our wives. Single men on this cruise were almost non-existent. Additionally, there were very few children or teens. We went to the pool deck where the Sailaway Party was being hosted by Jeff Majors, CoCo Brother, and Yolanda Adams. There was a DJ playing Christian dance music. It was interesting to contrast the music we heard this year with the music the DJs played during our first One Love Gospel Cruise in 2006. Back then, most of the dance music was Kirk Franklin songs. Now there is so much more up-tempo material from which to choose: Mary Mary, Vicki Winans, Christian hip-hop, etc. 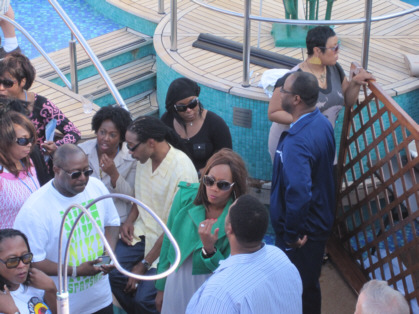 Jeff Majors and Yolanda Adams at the Sailaway Party

We went to Deck 12 to tour the fitness center and spa facilities. Although the use of the fitness was free, several of the classes offered by Norwegian were not. However, the One Love cruise provided free fitness classes throughout the week. Traci attended some of these but I did not. I try not to work out during vacation.

I am not a spa person but Traci asked me to join her as one of the Norwegian staff gave her a tour of their spa facilities. Some of the treatments being offered cost several hundred dollars. At the end of the tour, we were told we could fill out one raffle ticket per person for a chance to win spa treatment prizes. Even though I had no interest in this, I filled out one with the intention of giving the prize to Traci if I happened to win. We returned for the drawing. The place was full of women and less than a handful of men. I hung out in the back while Traci sat up front hoping her name would be drawn. Well, wouldn't you know it? My name was drawn instead! I had to bear some humiliation as the requirement to collect your prize was that you come to the front and do a dance - yikes! I did my victory dance and collected my coupon for 15% off a medi spa. I think the full price of the treatment was between $200 and $300. Traci did not use the coupon or the spa services during the cruise. As other prizes were given away at the drawing, I realized that nothing was being giving away for free. People were winning discount coupons only. If nothing else, this drawing helped me meet other passengers. Throughout the week, several people recognized me as "the guy who won the spa treatment". Continue...