By Day 5, our ship had reach Victoria, Canada. Victoria is situated on the southern tip of Vancouver Island across the bay from the U.S. state of Washington. Traci and I had signed up for the 3-hour Victoria Highlights and Craigdarroch Castle excursion offered by Royal Caribbean via Gray Line Tours. The tour took us through the residential neighborhoods, to a scenic overlook, to Craigdarroch Castle, and through downtown Victoria.

The residential areas of Victoria are very tidy. The homes contain perfectly manicured lawns with colorful flower beds and neatly trimmed shrubbery. People were out golfing and playing tennis. Seniors dressed in white were lawn bowling. We rode through a park where ducks, geese, and peacocks grazed as children played. A bald eagle was perched in a tree proudly watching over her gigantic nest. The communities of Victoria appear to be among the happiest places on earth.

We were eventually driven to the top of a mountain that seemed more like a hill when compared to the snow-capped Olympic Mountains across the water. From here, we were able to get off the bus and take in an elevated view of Victoria and the cruise ships in port that day. It was not the most impressive overlook I've seen but it felt good to walk around in the fresh air.

From the mountain, we were driven to Craigdarroch Castle whose construction was completed in 1890. It is located in a residential neighborhood. We were given an hour to walk through the castle. There is a lot of intricate woodwork and stained glass as well as some books and letters of the Dunsmuir family that lived there. The family enjoyed playing music as a pastime. We saw many musical instruments throughout the residence. Given most of the items in the castle are roped off to discourage visitors from touching them, I was surprised to see a sign inviting musically-trained visitors to try out the 1879 Steinway & Sons square piano. Playing piano has been my hobby since age seven; therefore, I decided to sit down and play a few bars of Chopin. The piano has obviously been well maintained over the past 130 years. It had a very nice tone even though the person playing it was a little rusty:(.

We made our way up to the castle's circular tower where we could look out over the city. The view was nice but the more impressive thing for me was the large wooden door that was shaped to seamlessly fit the curvature of the room. 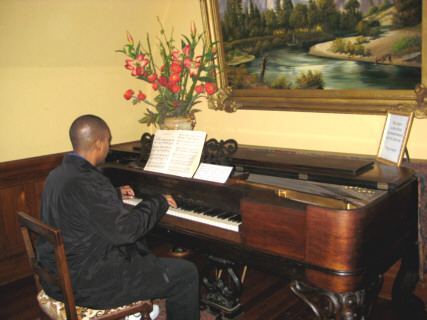 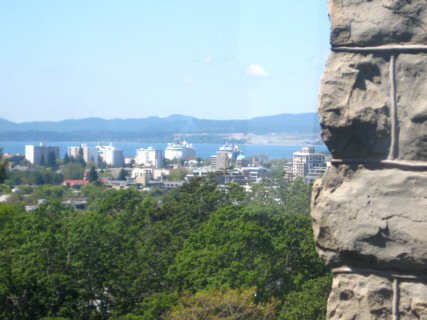 view from the castle's tower

Not paying close enough attention to the time, Traci and I had to quickly leave the castle and chase our tour bus that was pulling off one minute after we were supposed to be back onboard. How embarrassing.

Downtown Victoria has shops, restaurants, hotels, museums, Chinatown and the Inner Harbour. The merchants in the area will accept U.S. currency but will give you change in Canadian. After having toured the tidy residential areas of the island, it came as no surprise that downtown Victoria is very clean and stately. Even McDonald's has an elegant chandelier hanging in its lobby. 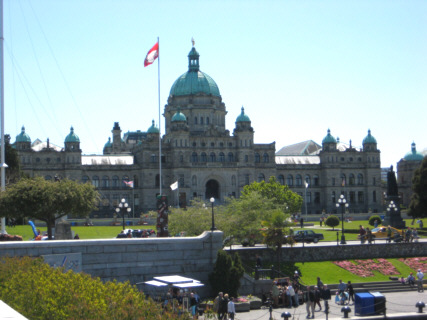 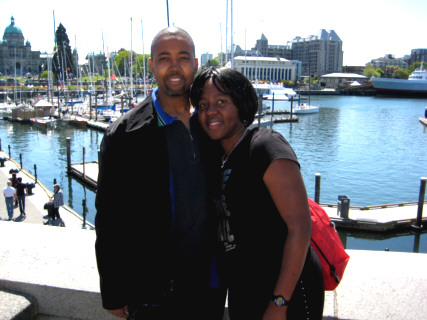 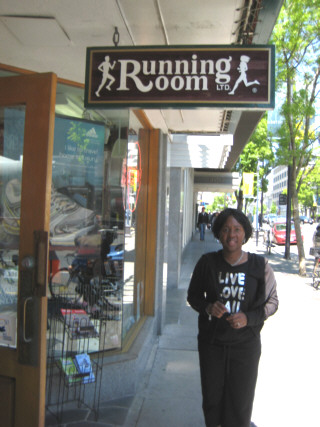 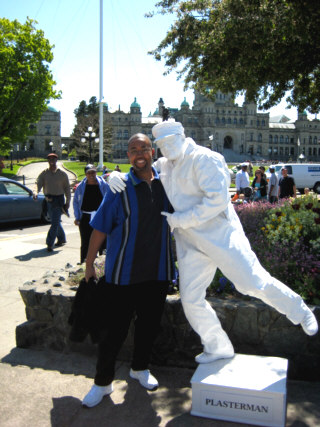 There were several ways to get back to the ship: pay $10 for a taxi, pay $6 for the CVS Cruise Victoria shuttle, or walk. It was a bright sunny day with near perfect temperatures. Therefore, Traci and I ask for directions from the Visitor Center and made the easy 20-minute walk back to the ship.

Arriving back at the cruise terminal, we still had over an hour before we needed to be back on the ship. We decided to do the 1-mile round-trip walk out to the Ogden Point Lighthouse. It was a good spot to photograph the three ships that were in port that day. We stopped in the souvenir shop before standing in line to board our ship. Traci bought an outfit while I did my walk down the snack aisle. This time, my snack of choice was a lollipop made of Canadian maple syrup. It was a yummy sweet and sticky treat. 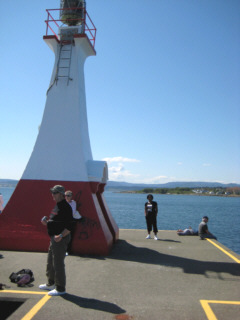 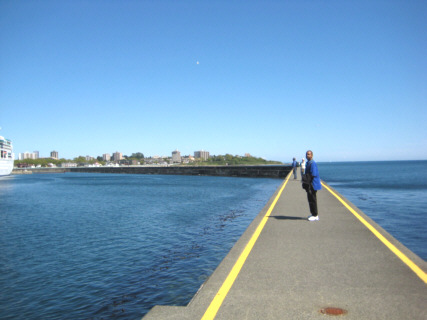 1/2-mile walkway between the ships and lighthouse 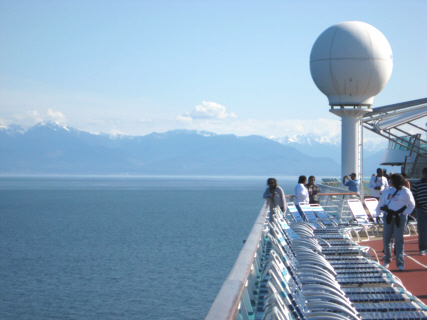 Our ship pulled away from the port at 5 PM sharp. I braved the cold wind as I stood on the pool deck for an hour admiring the majestic, snow-capped mountains of the Pacific Northwest. It reminded me so much of the Alaskan cruise Traci and I did with my parents back in 2001.

We spent our daytimes at sea going to seminars/events, chilling in the room, eating, or working out (mainly Traci). There were no parties on the pool deck this year. It was just too cold. Traci attended the Home Depot seminar where she joined one of the teams in a race to build a wall. She also had a nice time at the annual Girlfriend Coffee Talk passenger fashion show. We both attended the Black in America 2 panel discussion hosted by Soledad O'Brien of CNN. AT&T offered free internet access every afternoon in the business center but there was normally a 30-minute wait to use the computers. The last full day of the cruise featured a screening of the movie Dance Flick. There were many other things to do when not in port but we paced ourselves this year and did not attempt to do everything.

Despite the cold, I enjoyed going on deck to stare at the ocean. One day I saw, porpoises leaping out of the water beside the ship.

We did a little more onboard shopping than we normally do. In addition to the $200 of ship credit we had, Traci and I also each received a coupon booklet for being Platinum members of Royal Caribbean's Crown & Anchor Society. It contained all types of discounts and freebies to be used on the ship. We used some of the coupons to purchase professional photos. Traci used some to buy clothes.

The coupon book also helped us discover Johnny Rockets. We had always avoided this burger joint on previous cruises because of the $5 cover charge. Yes, I know $5 is not much money but we have a hard time spending money on food when meals in the dining rooms are already included in the price of the cruise. But since we had the coupons, we gave Johnny Rockets a try. We really enjoyed it. The food was good and the lively waiters would periodically perform a dance routine. We liked the food enough that we ordered a take-out the next day for lunch. 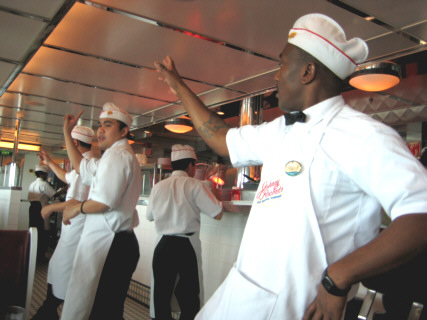 We enjoyed our days at sea but I was a little disappointed with the service onboard the Mariner of the Seas. It fell below the level of service of the other Royal Caribbean ships the Tom Joyner Cruise has used in the past. The crew was cordial but not very enthusiastic. Our cabin steward seemed to be doing the bare minimum in terms of making up our cabin. Traci and I went to the Windjammer for the midnight buffet one night. The food was luke warm and not very good. The chicken tenders were so tough I pretty much knocked all the other food off my plate trying to cut them. Although meals were very good in the main dining room, the table staff took a very long time bringing our orders. I wasn't sure what was going on with this crew.

See Ya' Next Year

That dreaded last night of the cruise (a.k.a. Might As Well Night) had finally arrived. Reminders that our vacation was almost over were everywhere. The debarkation instructions had been distributed. We ate our 'last supper'. There were long lines at the front desk where issues with ship charges were being resolved. All the bands had packed up which meant tonight's entertainment was a comedy show. Ordinarily, I like comedy shows but most of the comedians on this ship use foul and vulgar language in their routines. I prefer the clean comedians such as Akintunde and AJ Jamal who performed as opening acts earlier in the week. They have very funny sets without coarse language.

We packed our suitcases for our flight back home. We have learned to always bring an empty duffle bag on this cruise to carry all the sponsor giveaways we receive in our cabin each night. This year, the Tom Joyner staff offered to print the boarding passes of those passengers flying on Southwest Airlines the next day. We signed up for this courteous service but boy was there a long line when I went to pick up our boarding passes at midnight.

The next morning, our debarkation went smoothly. We carried our own luggage off the ship instead of leaving it out the night before for the ship crew to move it. I was glad we arrived at the airport 3 hours before our flight. With the shuttles dropping off all the cruise passengers at the same time, the check-in lines extended outside the building. It took us an hour to make it through.

Having made it through check-in and security, Traci and I shared a pizza as we chatted with other cruise passengers who were also waiting for flights home. We ran into Kevon Edmonds of After 7 and Charlie Wilson of the Gap band - both had performed on the ship that week. We said hello, complimented them on their shows, and took a picture. 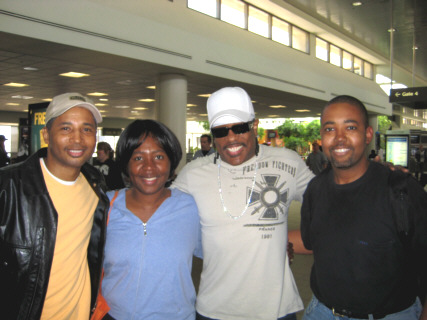 Kevon Edmonds (After 7) and Charlie Wilson (Gap Band) at LAX

Tom Joyner and his staff had to jump through a lot of hoops to pull off this west coast cruise this year. Tom sounded relieved as he announced that the 2010 cruise will be back in the Caribbean. It will leave Miami on the Liberty of the Seas and stop in St. Thomas, St. Maarten, and CoCo Cay, Bahamas. UPDATE: The Fantastic Voyage Cruise 2010 itinerary has been announced and is different than the itinerary proposed last year. Check out the new itinerary. Traci and I pre-registered for next year before leaving the ship. We wanted to make sure we get our favorite room overlooking the Promenade Deck. No money is due for a few months.

We thought 2009 would have been our last Fantastic Voyage for a while but after we received our donation receipt from the Tom Joyner Foundation, we realized about 70% of our cruise cost is a charitable contribution tax write-off. This was a significant increase from past cruises. Besides, this cruise is a fun way to support students furthering their education. So, God willing, we will be partying with a purpose again next year. Fantastic Voyage 2010...