I saw a documentary about an ice hotel on TV many years ago. At that time, the world's only ice hotel was located in Sweden above the Arctic Circle. It looked fascinating to me and I hoped to visit it one day but I knew I would have a hard time trying to convince anyone to fly to the Arctic with me in winter.

Fast forward to August 2011. I was at work changing the page on my 1000 Places to See Before You Die page-a-day calendar when it just so happened that the spotlight destination of the day was the Ice Hotel in Jukkasjarvi, Sweden. Out of curiosity, I did a Google search for the words "Ice Hotel". Lo and behold, listed in the results was Hotel de Glace, an ice hotel located just outside of Quebec City, Canada. Quebec City is much more convenient to get to than a small village in Sweden.

I did some looking around on the Hotel de Glace web site and then called Traci to ask if she wanted to take a trip to Canada this winter to see the Ice Hotel. My original intent was not to spend a night in there. It was just to make an excursion from Quebec City to do one of the guided tours of the Ice Hotel. Companies like Old Quebec Tours offers Ice Hotel tours that pick you up and return you to your downtown Quebec City hotel. However, during my conversation with Traci, I had a fleeting thought of what it would be like to actually spend a night in an ice hotel. Traci is such a trooper. Even though spending money to stay a night in an ice hotel was never on her radar and even though she risked being ridiculed by people she knows for doing so, she said yes and never wavered from her decision to join me on this off-beat excursion. I am truly blessed to have her in my life.

It is rare that anyone spends more than one night in the Ice Hotel. We definitely had no plans to buck that trend. Hotel de Glace offers several types of overnight packages. I chose the Adventure Package mainly because it included dog sledding at a nearby resort. Dog sledding is an activity I've wanted to try for as long as I can remember. Additionally, the Adventure Package included a back-up room at the Four Points by Sheraton hotel down the road from the Ice Hotel. 24-hour shuttle service was provided between the two hotels. I thought it would be good to have a warm back-up room available in case our suite at the Ice Hotel proved to be too cold for us. Here is a summary of what was included in the Adventure Package we purchased:

We planned two days of sightseeing in downtown Quebec City before and two days after our Adventure Package. Those of you who have followed my web site over the years already know Quebec City has been on my "Places I'd Love to Visit" list for several years. This vacation became an opportunity to check off three items on my Bucket List: visit an ice hotel, try dog sledding, and visit Quebec City. Here is my review of our stay at the Ice Hotel (Hotel de Glace)... 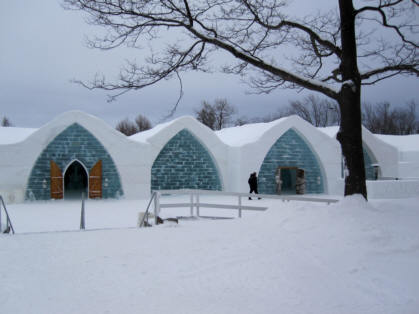 The day I had been awaiting for years had finally arrived. After a perilous dog sledding excursion (more about that later), Traci and I were ready to make our first visit to an ice hotel. We had already checked into the Sheraton (our back-up hotel) but needed to go to the Ice Hotel to check in and pick up our vouchers for the Adventure Package. As part of the package, we received complimentary 24-hour shuttle service between the Sheraton and the Ice Hotel. We simply needed to call the front desk of the Sheraton and they would call the Ice Hotel shuttle driver to come pick us up. Since the two hotels were only a mile or so apart, we never needed to wait more than 10 minutes. I don't think anyone else was doing an Ice Hotel package during our stay because Traci and I were always the only ones on the shuttle.

I was a little perplexed when we arrived at the Hotel de Glace property and pulled up to the front door of a building that certainly was not made of ice. We were at the main pavilion (heated building). Inside was a gift shop, ticket windows, groups waiting for tours, and turnstiles. Traci and I headed to the booth labeled "Overnight Guests" where we were greeted by a friendly, enthusiastic lady who attached our overnight passes to our jackets, gave us a locker key pass, and gave us our voucher booklet for the Adventure Package. She sent us through the turnstiles and outside to get to the Celsius Pavilion (another heated building) where we would be checked in. During our walk down the steps and ramp to the Celsius Pavilion, we finally got our first look at the exterior of the Ice Hotel. As much as I wanted to rush over and see the interior, I contained my excitement a little longer as we stopped by the check-in desk at the Celsius Pavilion. The lady at the desk checked us in and then gave us information about tour schedules, activities, facilities, lockers, and most importantly, what we were supposed to bring with us when we returned later that evening for our overnight stay. Oh yeah, she also tried to get us to upgrade to one of the premium suites that contain a fireplace and private spa. A premium suite like this would have cost us an additional $250. We said no thank you. 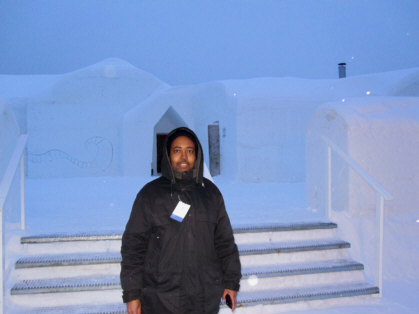 With the formalities out of the way, Traci and I headed out of the Celsius Pavilion, crunched through the snow, and finally entered the Ice Hotel! I am happy to say the interior exceeded my expectations. I can try to describe what I saw using words like amazing, captivating, surreal, ephemeral, psychedelic, dream-like, winter wonderland but these words fall short of truly describing the scene. All the furniture is made of ice. There are ice sculptures accented by colored lights. The walls are decorated with protruding etchings.

The temperature inside the Ice Hotel remains between 27°F and 23°F regardless of the temperature outside. Having just returned from dog sledding, Traci and I were layered up pretty good. I was wearing boots, two pairs of socks, two pairs of pants, a shirt, a fleece pullover, my winter jacket, gloves, a knit cap, and the hood of my jacket. It probably comes as no surprise that I did not feel cold at all as we were exploring the hotel.

Wide-eyed and giddy, Traci and I hastened down the corridors to see the suite where we would spend the night. We entered our room, Suite S-13. By this time, our vocabulary had been reduced to words like "Wow!", "Check this out!", "That is so cool!", "Get a picture of this." At the time of booking our stay, I had upgraded from a basic room (no decorations) to a themed suite (sculptures and artistry). The themed suites are designed by the extremely talented artists and architects Hotel de Glace hires to make the hotel a mind-blowing attraction. No two suites are the same. Our suite was designed by the winner of the annual architecture contest between universities in the Quebec province. This year's winner was a student at Université Laval in Quebec City. He/she did an outstanding job on our suite.

Our Suite at the Ice Hotel 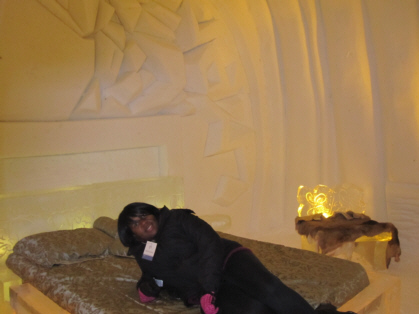 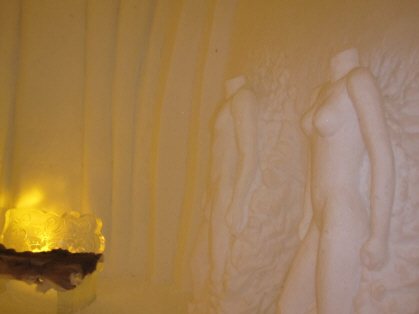 Traci catching up on some reading 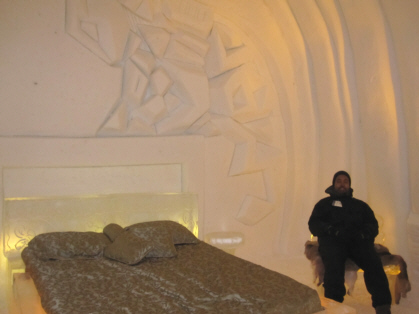 "Where's the thermostat? It's freezing in here."

We checked out other parts of the Ice Hotel. At times we had to contend with traffic in the corridors from groups on guided tours. With our overnight passes, Traci and I were free to roam just about anywhere we wanted. We entered the main hall of the hotel and saw the elegant 600-pound ice chandelier hanging from the ceiling. Each year, the Ice Hotel has an overall theme. The artists who work on the Ice Hotel are free to create what inspires them as long as it aligns to the main theme. This year's theme was First Nations People (Inuit and other native civilizations that lived in Canada before the arrival of Europeans). There was a recording of drumming and chanting playing as we entered the main entrance. Ice sculptures representing First Nation legends and stories were displayed. continue...