I had planned for Sunday morning to be Traci's birthday run. Traci, my sister, and her husband have enjoyed running together over the years. I knew Traci would enjoy getting in a few miles with them on the morning of her birthday but Mother Nature had other plans. At 7 AM it was already hot and humid. Traci and my brother-in-law opted for a short walk through Murphy Farm in Harpers Ferry National Historical Park while the rest of us slept in.

We checked out of the Clarion and made our way to the Bavarian Inn in nearby Shepherdstown, West Virginia. The Bavarian Inn is an attractive hotel built in the style of an alpine lodge. It sits on a hill overlooking the river. It was my first choice for our overnight but they had no more vacancies when I tried to book two-weeks prior. However, one of my co-workers told me that they have an amazing Sunday brunch. I made a reservation for the brunch and concur with my co-worker. The food was excellent. There were such a variety of good quality selections ranging from German food to caviar to carving stations to seafood. 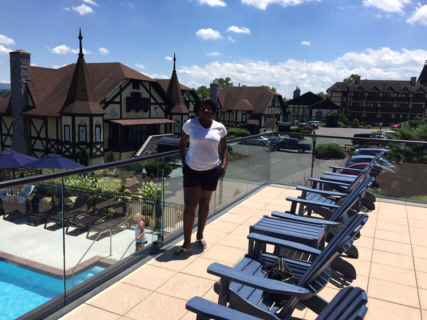 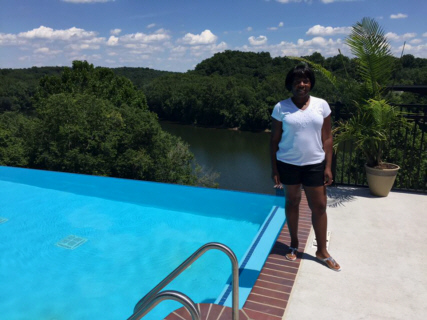 We said goodbye to my sister and her family. I was so grateful that they made the 2.5-hour drive from their home to be a part of Traci's birthday surprise. They had to get my nephew to summer camp. This was going to be his first summer as a camp counselor. He was very excited.

Traci and I made the short drive over to German Street in downtown historic Shepherdstown. The town has worked hard to maintain the original building facades dating back to the 1700's. However, today the building interiors now mainly serve as antique shops, eateries, and souvenir shops.

We stopped in the visitor center where a nice lady gave us a short history of the town, a map, and plenty of brochures on attractions in Shepherdstown and the surrounding region.

We headed next door to the Historic Shepherdstown Museum. It began as the Entler Hotel in the early 1800's and served different purposes through the years until it became the museum it is today. The second floor is the real gem. It is there where you can walk through the Civil War room containing artifacts from the period. There are other rooms dedicated to sports such as the baseball Negro Leagues. Another room contains a carriage that was pulled by horse for mail delivery in 1905. You can see a model of a simple hotel room circa early 1800's. There are other interesting exhibits on the second floor.

Traci and I made our way to the backyard. Across the yard is a building containing a replica of the first steam-powered boat. James Rumsey demonstrated his new invention in Shepherdstown on the Potomac River in 1787. It was constructed before that of Robert Fulton who I learned in school created the first steam boat, The Clermont. Rumsey never got the popularity of Fulton because Rumsey died suddenly in England in 1792 before he had a chance to demonstrate his new boat. 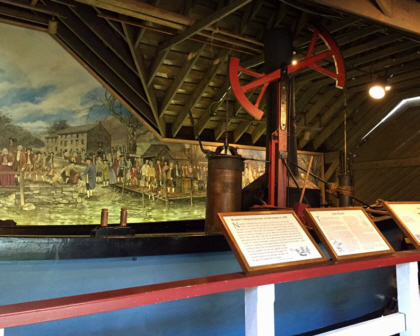 Even though, you can go through the entire Historic Shepherdstown Museum in less than an hour, Traci and I ended up spending most of our day there. We were no longer browsing the museum. Instead, as Traci was lining us up for a selfie in front of the steamboat, a nice couple offered to take the picture for us. It turns out they were travel fanatics like Traci and me. We ended up having a great conversation. I even got a chance to speak a little French with them. Those who have read my other trip reports know that one of my hobbies since a trip to Paris in 2003 has been to learn to speak another language. I decided to pick up where I left off with my high school French at that time and have been working at it ever since. Over the years, I have been amazed by the unexpected opportunities to speak the language that have arisen during our travels - everywhere from Ireland to Argentina. It turns out that the couple we met that day had just moved back to the U.S. after living in Switzerland for many years. When we found out about this, Traci told them I was learning to speak French - and so began the brief French portion of our conversation. We continued to chat mostly in English until we noticed the museum was being closed for the day.

Afterwards, Traci and I spent about a half-hour going in and out of the shops along German Street. We did not buy anything. I am not much of a shopper. I enjoyed chatting with the friendly vendors. Most will tell you that the big summertime attraction in Shepherdstown is the theater scene. We were told professional theater actors perform in Shepherdstown during the summer. Traci and I did not check out any performances on this trip but perhaps we will during another visit.