I planned a surprise weekend road trip to celebrate Traci's birthday. I chose Harpers Ferry and Shepherdstown for a weekend of nature walks, museums, living history, and great meals with family.

I had fun planning this surprise road trip. Harpers Ferry, West Virginia is only a 45-minute drive from our house. Several of my co-workers have been to Harpers Ferry. When I mentioned I had selected the town as the destination of Traci's surprise birthday road trip, they had plenty of recommendations. In fact, it was from their recommendations that I ended up adding an overnight to our itinerary so that we could visit nearby Shepherdstown, West Virginia. I told my older sister about my secret plans and asked if she and her family wanted to join us. We love hanging out and vacationing with them. They agreed to meet us for dinner in Harpers Ferry and spend the night so that we could attend brunch at the Bavarian Inn. Great! Traci will be so surprised to see them! With the planning phase completed, I sent Traci the following instructions via email: 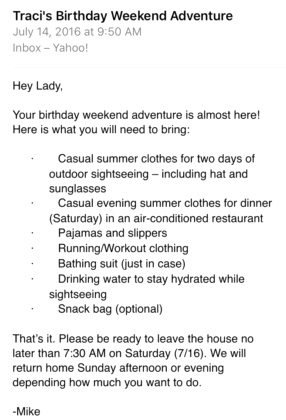 There was a little wrinkle in this plan. Traci was asked to come into work for a 6:30 AM meeting on the Saturday we were supposed to leave. A Saturday meeting has never happened in her entire career. (Out of all the Saturdays for this to happen... SMH) Fortunately, this did not derail our plans. Traci knew it would be a short meeting. Her job is somewhat on the way to Harpers Ferry. Therefore, I waited in the parking lot of her building while she attended her meeting. We had time to kill afterwards so we had a yummy breakfast at a Bob Evans diner.

Harpers Ferry sits at the intersection of the Potomac River and the Shenandoah River. It is also situated at the intersection of three states: Maryland, Virginia, and West Virginia. The only thing I knew about Harpers Ferry before our trip was John Brown's Raid which I learned about during our study of slavery in history class long ago. Traci and I would learn about this and other things that took place in the region during the 1700's and 1800's. We also browsed antique shops and souvenir shops before celebrating Traci's birthday over some fabulous meals.

There was a $10 fee per car to enter Harpers Ferry National Historical Park. Shuttle buses shuttle visitors between the park visitor center and the Lower Town (historic section of Harpers Ferry) regularly throughout the park hours. There are daily ranger-led talks and tours. From my research, I knew that there was a 10 AM Flowing Through Time: Hike Through the River's Place in History on our arrival day. This was approximately a 2-hour walk from the Harpers Ferry National Historical Park Visitor Center to the Lower Town with stops along the way for the ranger to talk about history and nature. I thought it would be a fun way to kick off our sightseeing.

Our ranger-led hike was a 1.5-mile walk through the forest, along the wetlands, and eventually ending in the Lower Town. The hike was not strenuous - no need for any hiking gear other than water if it is a hot day. The beginning was a gradual downhill. The rest was mostly flat. We had to walk down some uneven steps at one point but they were not too bad.

The ranger gave an excellent narrative of the history of the region. We learned about the Robert Harper (for whom the town is named) who had established a ferry service in 1761 to transport settlers along the rivers. We learned about John Hall who in 1819 became famous for the mass-production of rifles. Rifle-making was done by hand before Hall discovered this use of Thomas Blanchard's new invention of the lathing machine. There is an lathing machine located in the Industry Museum of the Lower Town. Of course, we learned about John Brown's failed raid on Harpers Ferry. His goal was to start a slave uprising. In addition to the history, we had a chance to check out some wildlife such as water fowl and turtles. 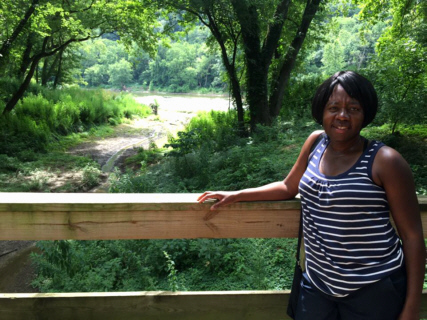 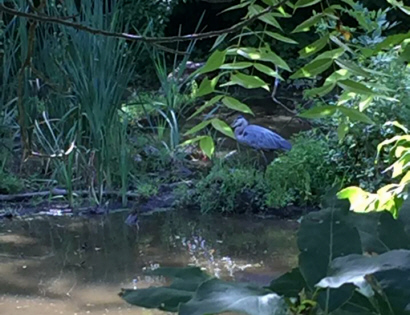 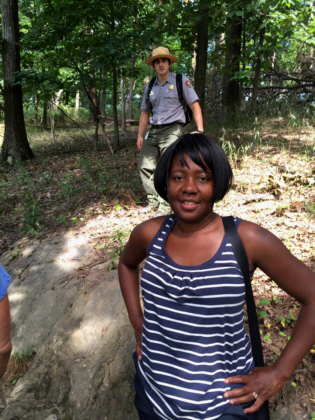 Our tour ended in the Lower Town where the ranger told us about the fall of Harpers Ferry in terms of being the industrial city it once was. In general, the ammunition production which made it so important could be done cheaper in other regions of the U.S.. And then there were the devastating floods that sealed the town's fate. It was astounding to see the water markers on the side of one of the buildings. When Harpers Ferry floods, it really floods! I'm talking 30 feet or more. This tour was very well done. I highly recommend it.

Exploring on our Own

With the outstanding ranger-led hike behind us, it was time for Traci and me to explore the Lower Town on our own. Strolling through the few blocks that comprise Harpers Ferry's Lower Town is an interesting experience. There are people dressed in Civil War attire who enthusiastically tell you about the time period they represent. I felt sorry for the people dressed in the wool soldier uniforms. It was 90°F and humid on the day of our visit.

There are several small museums in the Lower Town. Very few of the ones we entered required longer than 15 minutes to walk through. Some of the more memorable ones for me were the Information Center whose displays tell Harpers Ferry's history from different perspectives and time periods; the Black Voices African American Museum containing artifacts and photos of African Americans dating back to slavery times; and my favorite, the John Brown Museum which presents the life of John Brown through a series of videos and exhibits. I'm a sucker for wax museums, so I had to visit the John Brown Wax Museum (different from the John Brown Museum). This was the only one for which we had to pay ($7/person). The museum has existed since the 1960's and it does not look like much has changed since that time. Nonetheless, there were some interesting scenes depicted in wax. I was especially intrigued by the scene that depicted John Brown's trial. He was in the courtroom on a hospital bed after being severely wounded by U.S. Marines who captured him during his failed raid.

In addition to museum visits, we browsed souvenir shops and small novelty stores. We got cold drinks at one of the small eateries to help us deal with the sweltering temperatures. I was jealous of the people I saw with ice cream. I love ice cream but have not had any in years since it does not like me. As I've gotten older, ice cream does not agree with my system. It's not lactose intolerance because I can drink milk and eat cheese without experiencing any discomfort. Anyway, I digress.

Strolling Through the Lower Town 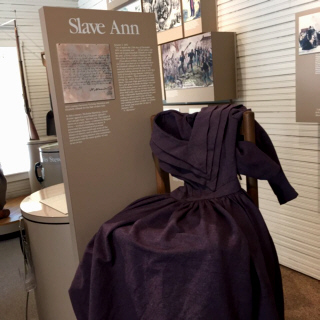 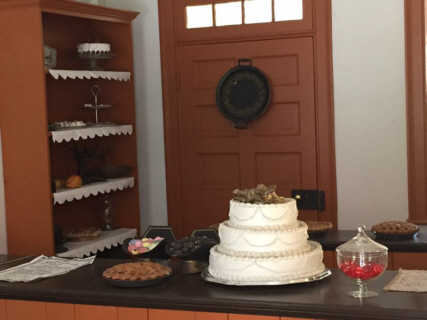 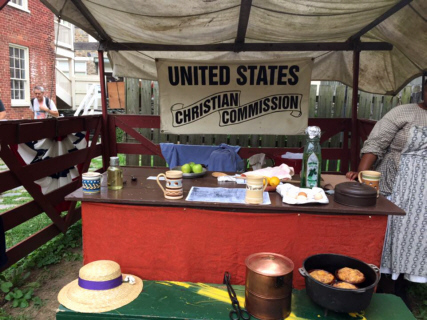 cooking demo of dishes from the Civil War period

Harpers Ferry has many hiking trails ranging from easy to strenuous. The 2,160-mile Appalachian Trail which stretches from Maine to Georgia passes to through Harpers Ferry. We came across a man who had been on the trail for several months with the goal of hiking it end-to-end. Traci and I were obviously not doing anything that intense. Instead, we took a walk across a bridge into Maryland. Below us were people tubing on the rivers. As we were walking across the bridge a freight train came across one of the other bridges. The conductor waved from one of the longest trains I have ever seen. It had five engines and must have been pulling at least 300 cars. 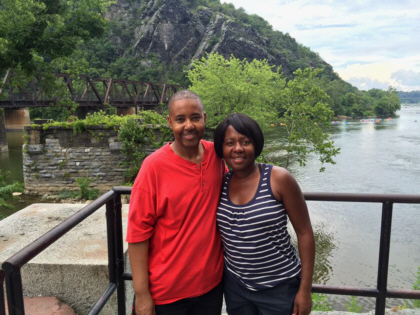 ready to cross the bridge into Maryland

We did not spend much time walking the trails in Maryland. I was trying to start wrapping up our day so that we could meet my sister and her family at the hotel. Traci had no idea about the surprise meeting and thus she still wanted to do more exploring. I managed to get her back to the Lower Town but a Civil War period cooking demonstration by one of the costumed actors captured her attention. After that, we were on our way up a hill to see Jefferson's Rock which was named after Thomas Jefferson who visited Harpers Ferry in 1783. He remarked in his 1785 book Notes on the State of Virginia that "this scene is worth a voyage across the Atlantic". I thought I was going to have to sneak off and text my sister to tell her I did not know when we were going to make it to the hotel. Finally, I got a reprieve. Storm clouds started to move in and we could hear rumbles of thunder in the distance. With that, we took the shuttle back to the park visitor center where we made it the car just before it began raining by the bucket loads. 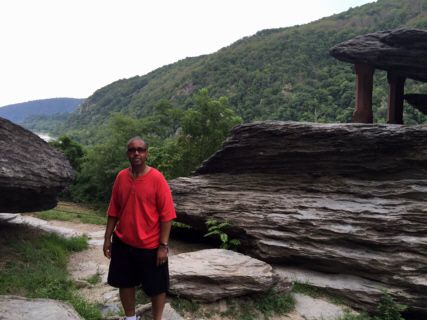 The hotel I chose was the Clarion Hotel Conference Center located about a mile from the park entrance. We could not have timed our arrival any better. My sister and her family drove up to the front of the hotel just two minutes after we did. Traci was so surprised to see them. I could relax at that moment. The surprise was a success.

The Clarion exceeded our expectations. In addition to large, clean rooms and their location, they have an indoor pool and a restaurant. A complimentary breakfast buffet is included.

Traci and I got cleaned up after our day of sightseeing in the heat and humidity. I had made 6:30 PM dinner reservations at the nearby Anvil Restaurant. It has a varied menu with an emphasis on seafood. We had good food and a nice time catching up with our family. Continue...