Traci, along with my sister and her family, planned an awesome weekend Virginia road trip for my birthday. This gave Traci and me an opportunity to visit some of the places we have seen on advertised on highway billboards but just never took the time to visit.

My instructions from Traci were to be home from work by 2 PM on Friday, be packed for a casual weekend, and have a full tank of gas. I complied and by 3:30 we were on our way to enjoy my surprise birthday weekend. She put the destination into the Navi (nickname for our GPS navigation unit) making sure to change the display so that it did not provide any clues as to where we were headed - not even the estimated arrival time.

Three hours later we arrived at the Natural Bridge Hotel in Natural Bridge, Virginia. At that point, I realized this must be the sightseeing road trip we had talked about doing since moving to Virginia 2.5 years ago.

The Natural Bridge hotel is a historic property. We had a room in the main building since Traci was told the rooms in the wings are smaller and older. Even still our room had colonial-style furniture. Other than the very comfortable mattress, there was nothing special about the room. We dropped off our bags and headed downstairs for the all-you-can-eat Friday night seafood buffet in the hotel’s Colonial Dining Room. Well, the surprises just kept coming. As we entered the lobby, I saw my sister Sugar, her husband Audie, and their 12 year old son AJ. I never expected to see them here. I thought they were at a resort in Aruba and would not arrive back in the States until that Friday or Saturday. I was floored when they told me they indeed arrived home that Friday morning. They pretty much dropped off their luggage at home, packed weekend bags, and then drove three hours to meet Traci and me for my surprise birthday weekend. I was really feeling the love knowing the lengths everyone went to to make this a special birthday for me. 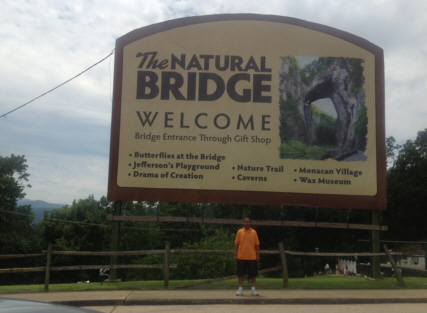 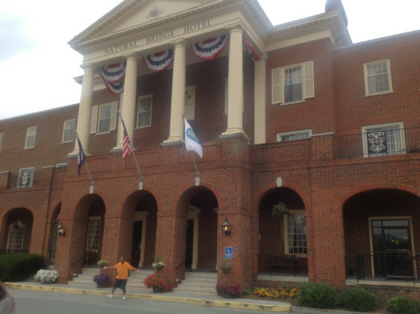 Natural Bridge Hotel - our lodging for the night

The town of Natural Bridge takes its name for its famous natural bridge rock formation that has been standing for more than 200 million years. At 215 feet tall, this limestone structure is higher than Niagara Falls. We did the Friday Presidents Seafood Accommodation Package at the Natural Bridge Hotel. In addition to the seafood buffet, the package included a mountain view room, 2-day unlimited admission to the Natural Bridge, Natural Bridge Caverns tickets, and Wax Museum tickets.

The seafood buffet was okay. It reminded me of the type of food you find at a place like Old Country Buffet or Ryan's. However, the real draw of this buffet is the king crab legs. I don't eat crabs but everyone commented on how scrumptious they were.

Each evening, the Drama of Creation light show takes place at the Natural Bridge. The times vary according to season. During our visit, this show took place at 9 PM. The hotel offers an 8:30 shuttle to the 30-minute show. Since the hotel is only a 10-minute walk from the Natural Bridge, Traci, AJ, and I decided to walk. When we stopped at the Natural Bridge Gift Shop to find out details about getting to the bridge, they told us a shuttle would be making a stop at the gift shop momentarily. While we were waiting on the shuttle, we met a couple who raved about the Drama of Creation. In fact, they said they were returning for their second night. They had us psyched about the show.

Unfortunately, my preconception of this show was way off. I am not sure why I was thinking this was going to be some hi-tech, special effects presentation. It certainly was not advertised as such. It began in 1927 when President Calvin Coolidge pulled the switch to display the lights on the rocks. I'm guessing not too much has changed since that time. In order to enjoy it, you need to go with a meditational mindset. 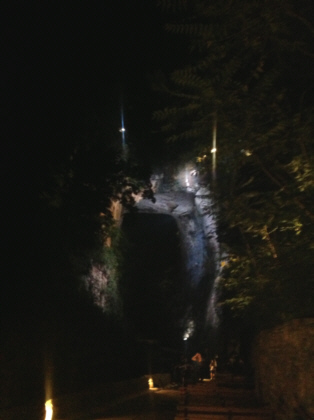 There are benches beneath the bridge on both sides. Traci and I walked beneath the bridge arch and took seats on the far side. It was a pleasantly cool night for early August. We heard the sound of the rushing creek that flows beneath the bridge. And then, it started. Multi-colored lights were projected on the rocks. Classical music began as a recording of a man with a booming voice told the Creation Story from the Book of Genesis in the Bible. This went on for thirty minutes. It was a peaceful experience. However, once was enough for us. We decided to walk back to the hotel instead of waiting in line to take the shuttle. This meant we needed to ascend 137 steps. It can be a taxing walk.

The next morning, the five of us enjoyed the hotel's breakfast buffet before heading out to explore the Natural Bridge and nearby attractions. We started off at the Butterfly Exhibit in the lower level of the Natural Bridge gift shop. There is no charge for the exhibit. It is a warm room. The butterflies tend to stay close to the lamps. Every now and then, one would flutter by and cause us to duck. I had no desire to touch any of these insects.

Next we walked down the 137 steps to the Natural Bridge. There is a 1-mile long nature trail that leads under the arch of the massive stone bridge and leads through the forest. With the exception of a few gravel sections, the path is paved. It is a peaceful walk with the sound of the rushing creek and the sight of many of the same butterflies we saw in the butterfly exhibit. 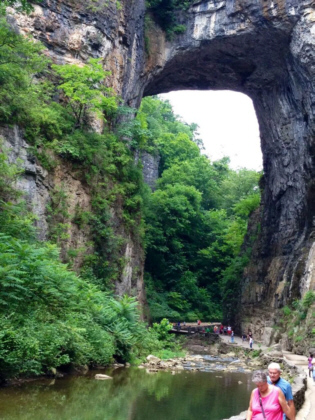 We took a short detour through the recreated Monacan Indian village. There we saw examples of beadwork, shelters, and animal hides. Two guides were stationed in the village to explain trading and clothing. The Monacan Indian village experience took us no longer than 15 minutes to see. We continued on the trail until the turnaround point at the small waterfall (Lace Falls). The trail was a nice and easy way to enjoy nature. 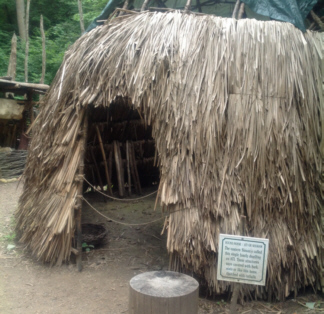 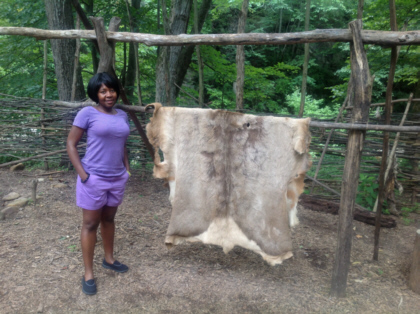 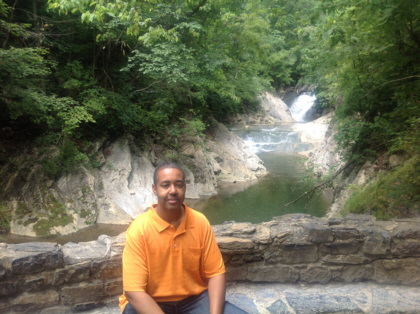 Our Natural Bridge tickets included admission to the Natural Bridge Wax Museum. This place immediately grabbed our attention because of the rather convincing wax figure swinging from the porch ceiling. Inside this dimly-lit museum were 150 life-sized wax figures in scenes depicting Natural Bridge history, Virginia history, American history, and Bible stories. Not all of the wax creations looked like the people they were supposed to represent but we had fun walking through the museum anyway. There is a section representing the U.S. Presidents from George Washington to Barack Obama. We sat in the small theater to watch and listen to the Last Supper presentation. A life-sized depiction of Leonardo da Vinci's Last Supper masterpiece is revealed.

The wax museum factory is next door and can be toured. We somehow got separated and Traci ended up being the only one in our group who walked through the factory. It is small and she was able to walk through it in a matter of minutes. 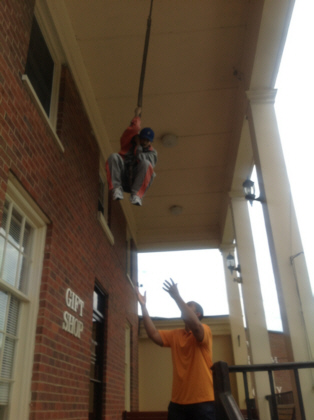 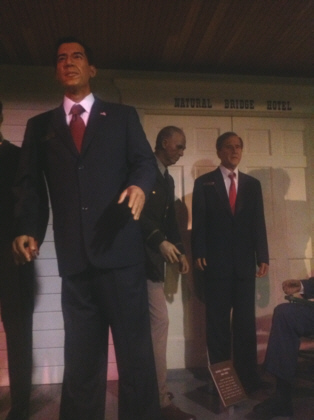 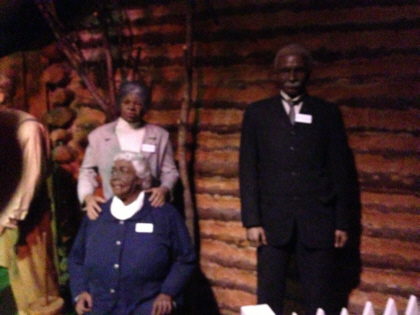 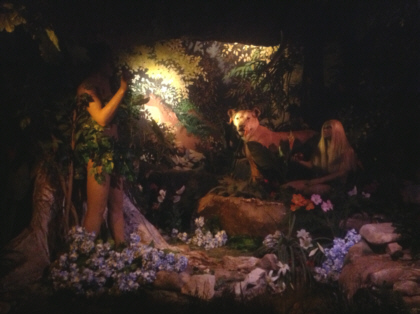 We did a short drive down the road to the next attraction in our Presidents Package - the Natural Bridge Caverns. It was a 45-minute guided tour. These were not the most impressive caverns I have ever seen but captivating nonetheless. Natural Bridge Caverns holds the distinction of being the deepest tourist caverns on the East Coast. Using stairs and ramps, we went 34-stories underground. We saw pools of water and many oddly-shaped rock formations including the dome-shaped rock in the famous Colossal Dome Room. We wore light jackets during the tour because of the constant 54°F temperature. It remains at this temperature year round. Natural Bridge Caverns is considered to be "active" meaning water still enters. It was not uncommon for us to get hit by drops of water during the tour. 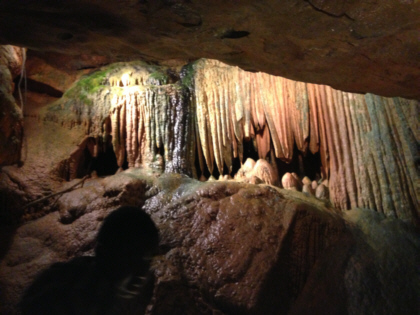 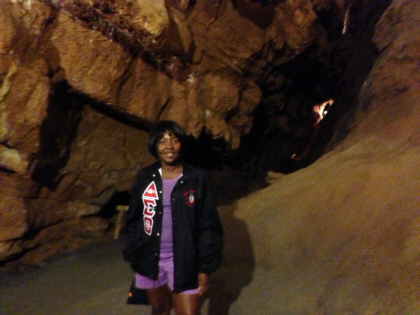 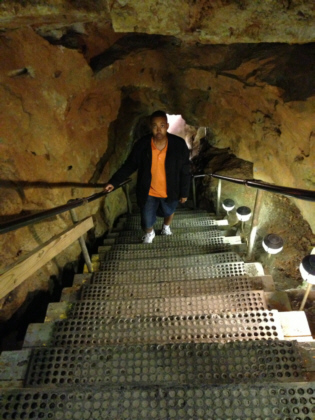 After the tour we struck up a conversation with our guide who told us Natural Bridge and its acres of surrounding land would be going up for auction soon. It is currently privately owned but could become property of the state, the nation, or another private owner. Stay tuned... Continue...