Attached to the Roman Baths is the Pump Room. This is an elegant dining room that dates back to the 18th century. There is a piano player tinkling away on the keys to set the atmosphere. Traci and I were not there for tea and scones, however. Instead, we were there to take part in an old prescription for good health that started in the early 1700's. Included in the price of our tour was the opportunity to taste the natural hot spring water. A man dressed in colonial clothing gave us a glass full from a punch bowl-style fountain. Yuck!!! This was the worst water I've ever tasted. It was warm and had a metallic taste. Traci and I both took a sip and gave it back. To make matters worse, the man took our glasses and emptied them back into the fountain. I can't believe they charge people to sip this water. It seemed like it took a whole pack of mints to get that taste out of my mouth. 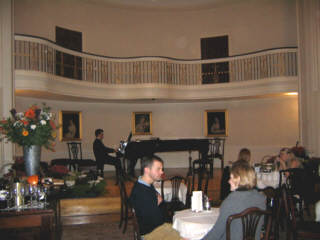 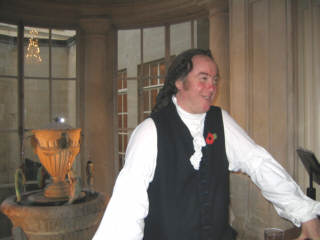 "Try the spring water. It's good for ya." 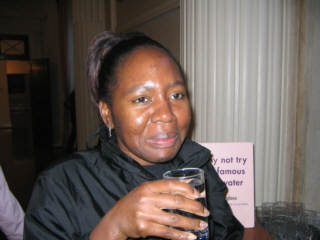 We were only given 90 minutes in Bath. This is not nearly enough time to explore this charming place. I believe it would take at least a full day to see most of what this town has to offer. Unfortunately, Traci and I only had 25 minutes left after leaving the Roman Baths. Our tour guide had told us to make sure we take tea at Sally Lunn's Refreshment House. This restaurant occupies the oldest house in Bath (built in 1482) and has been serving its famous buns and clotted cream since the 1680's. As we entered, we saw a couple from our tour group who told us they were there for 15 minutes before someone came to take their order. With time ticking away, Traci and I knew we were not going to have the chance to partake in this English tradition. Instead, we headed to the cellar to see the small museum that houses the original kitchen Sally Lunn used to create her famous delicacy. With no time to dine at Sally Lunn's, we settled for a take-out place in the next block that had scones and clotted cream. It wasn't Sally Lunn's but it was very good. We devoured this tasty treat and made it to the bus at 4:30 on the dot. 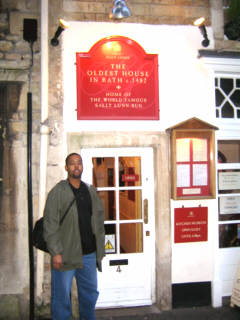 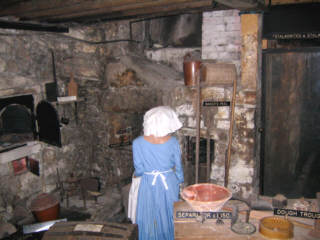 Sally Lunn's museum is in the cellar

It took over two hours to make it back to London from Bath. Rush hour traffic was heavy and it was raining cats and dogs. Although we were picked up from our hotel at the start of this excursion, we were not dropped off there at the conclusion. Instead, the bus driver made three stops at different locations in the city and it was up to the passengers to find transportation back to their hotels. Sue, our tour guide, made sure each of us knew where we should get off the bus and the best means for getting back to our hotel from there. In our case, the Tube (London subway system) was the best option. We only had to change trains once and were back at our hotel in about ten minutes after getting on the first train.

Traci and I were worn out after a full day of sightseeing so we ordered room service for dinner. I didn't care for my meal but it stopped my stomach from growling. Nonetheless, our vacation had come to an end. The only thing left to do was to pack up and be ready for our flight home the next morning. We had had a wonderful time discovering the history and scenic beauty of England. Main Page... 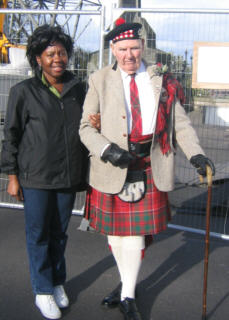