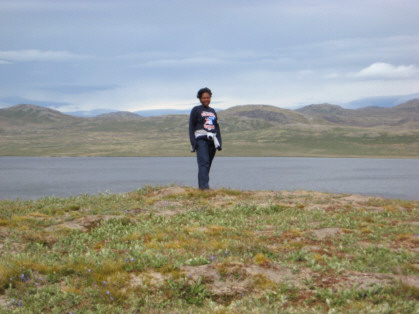 Kangerlussuaq is not a typical Greenlandic town in that it exists to support its relatively large airport. However, just outside Kangerlussuaq is a grand tundra and the largest ice cap outside of Antarctica.

We were met at the Kangerlussuaq Airport by Rita of Albatros Travel. She told us our room was not available yet. This was no surprise since it was 8:15 in the morning. She led Traci and me and a retired Danish couple into the cafeteria where she offered us tea and coffee as she briefed us in both languages on the tours her company offers. I appreciated Rita's honesty when she told us not to sign up for the Musk Ox Safari. She said it was not likely we'd see any musk oxen because at this time of the year, the animals graze near the ice cap to avoid the summer heat. The temperatures were in the mid to upper 60's in Kangerlussuaq during our stay. Instead, we signed up for the 5-hour Ice Cap and Barbeque Excursion. The barbeque was optional and cost slightly more but we took this option because I couldn't imagine Traci and myself standing around watching everyone else eat.

Rita led us out of the airport and to the Albatros office where we paid for the tour we had selected. Our tour wouldn't occur until the next day; therefore, the rest of the day was at our leisure. Rita had told us there was another souvenir shop down the road. Traci and I walked a half hour to get to this tiny shop in a youth hostel. The prices here were more expensive than the shops in the airport and inside the Albatros tour office. By the time we had walked back to the hotel, we were told our room was ready.

Hotel Kangerlussuaq is located in the same building as the airport. The hotel hallways were the most confusing I've ever seen. There is no elevator. Therefore, to get to our room, 3012, I carried our two 50-lb suitcases in each hand up two flights of stairs, rolled them through long corridors, and then carried them down a different set of stairs. The numbering scheme did not seem consistent. On the wing with the 3000's was a room labeled 1001. I also noticed a sign pointed up a set of stairs to get to the 2000's from the 3000's. I felt like we were walking through a fun house maze. We ended up having to travel this maze again with all of our luggage because we were given a smoking room that smelt like an ash tray. The hotel switched us to a non-smoking room with no hassle. 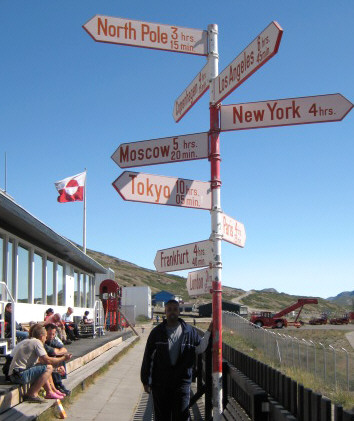 Kangerlussuaq is not like the rest of the towns we visited in Greenland. The town exists because during World War II when Denmark was occupied by the Germans, Denmark could no longer protect Greenland. The U.S. agreed to protect the island and built a military air base here. In those days, the base was known by its Danish name, Sondre Stromfjord. The U.S. held onto the base after WWII as a strategic location during the Cold War. In 1992, the U.S. sold the Sondre Stromfjord base back to Denmark for the equivalent of $1. It is now known by its Inuit name, Kangerlussuaq. Today, it contains the only runway in Greenland long enough to accommodate large international jets. Surprisingly, the area near the airport reminded me a lot of the the Southwest U.S..

There is a museum dedicated to the history of the base. It is located on the opposite side of the runway from Hotel Kangerlussuaq. Since it is dangerous and illegal to hop the fence and walk across the runway, we had to walk all the way around it. There is a "city" bus that we could have taken but we decided to walk since we had time to kill. It took us 45 minutes to walk there due to wrong turns. The scenery during the walk reminded me of the desert Southwest U.S. at times with its barren sandy terrain. Unfortunately, when I went to the window to buy admission tickets to the museum, I was told they do not accept credit cards. I had no more cash because I got rid of it at the local grocery store when we bought sodas and snacks for our room. We wouldn't have time to go back to the hotel, exchange currency, and make it back to the museum before closing. Therefore, we just walked back to the hotel and chilled out until our 6 PM dinner reservation. 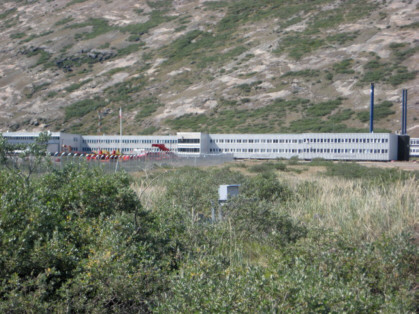 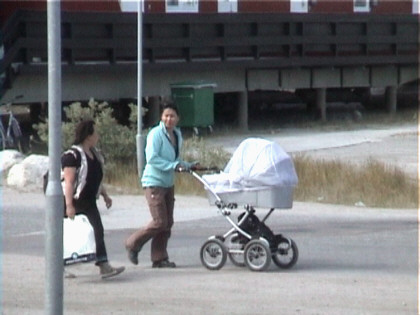 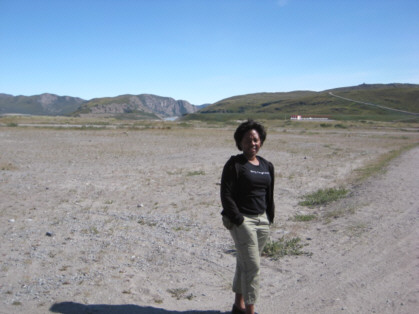 long walk to the museum... 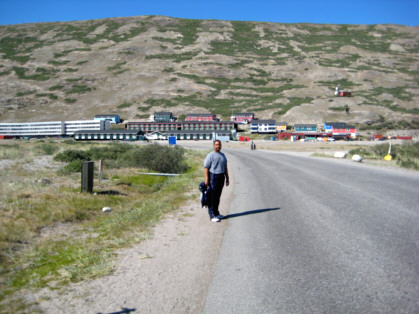 no money for the museum...back to the hotel