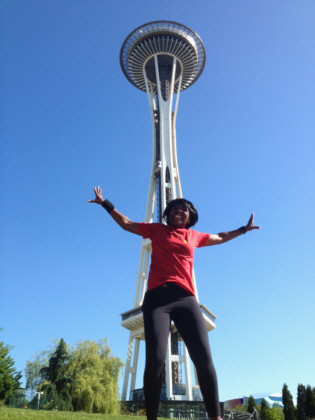 Since we only had two days to explore Seattle, we decided to pay for an organized city tour to maximize our coverage of the tourist highlights. I booked the 6-hour Grand City Tour by Tours Northwest. I was pleased with the tour and the company. Tours Northwest picks up its customers from their hotels and returns them to their hotels at the conclusion of the tour.

Our friendly tour guide picked up Traci and me at 10 AM. She did pick-ups at two other hotels around the city before beginning her tour narration. There were about 16 of us on the shuttle. Everyone except Traci and me were either in town to embark on an Alaskan cruise or they had just returned from an Alaskan cruise.

Our driver gave great commentary as she drove us through downtown. Seattle had just been named the fasted growing big city in the U.S.. With companies like Boeing, Microsoft, and Amazon in the area, people are flocking to the region for the employment opportunities. Amazon was in the process of building several blocks of office buildings at the time of our visit.

We were given an hour on our own at Seattle's most iconic structure - the Space Needle. It was built as an exhibit for the 1962 World's Fair. Tickets to ride the elevator to the top of the 605-foot structure were included with our tour. Our driver was successful in getting us there before noon to beat the crowds. There was no wait to ride the elevator to the top and have a look around. We took in the nice panoramic views of the city from the top of the Space Needle. There are also exhibits, a bar, and restaurant up there but we only did a 20-minute walk & gaze around the Observation Deck before taking the elevator back down. Of course all passengers are let off at the gift shop. 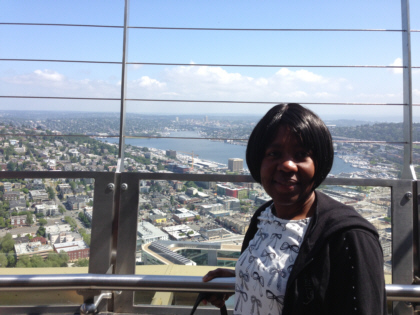 Observation Deck of the Space Needle

There are other attractions surrounding the Space Needle. There is the Chihuly Glass Museum. Although we did not enter the museum, we marveled at some of the glass structures that were visible from the exterior. The nearby EMP (Experience Music Project) is a museum dedicated to science fiction, fantasy, and music. Then there are a number of souvenir shops, street musicians, and food vendors in the area as well.

We rejoined our driver at the agreed upon spot and she continued showing us the city. We were given a 2-hour lunch break at Seattle's famous Pike Place Market. It began as a farmers market in 1907 and continues to thrive today. It is by the waterfront. There are all types of food for sale at the market - especially seafood. Traci and I waited with the other tourists at the famous Pike Place Fish Company for someone to make a purchase. When a purchase happens, the workers throw the fish to each other to be packaged. We had to wait about ten minutes but we eventually witnessed this notorious event.

There are many blocks of restaurants in the area of Pike Place Market. One of the most sought-after is the original Starbucks. The line was out the door when we walked by. Neither Traci nor I are coffee drinkers but we did at least pose for picture in front of the shop. 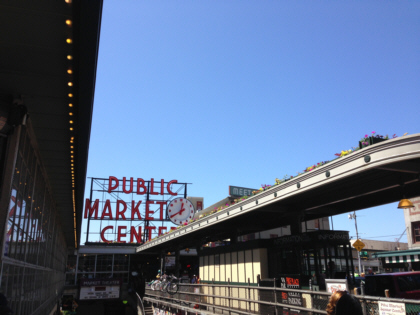 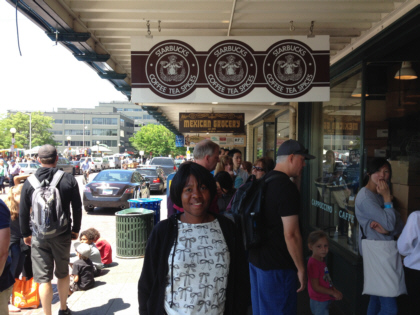 original Starbucks - line out the door 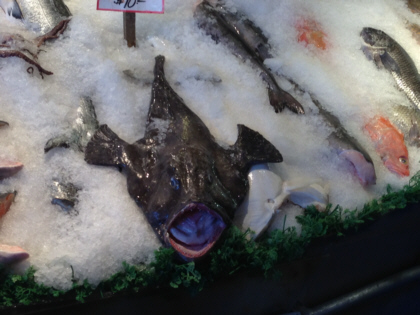 scary fish for sale at the Pike Place Fish Co.

Traci and I did quite a bit of walking, trying free samples, and reading menus before we settled on a quick lunch at the Seatown Rub With Love Shack eatery. Traci had a crab roll and I had a cup of clam chowder. We did not overdo it because we wanted to try the donuts at the Daily Dozen Doughnut Co. The key is to get a hot batch. The donuts are small and tasty - especially when they are warm. Traci and I shared a half-dozen of assorted flavors - including one with bacon bits. It was not as bad as it sounds. It was sweet and salty.

One of the lasting memories of our visit to Pike Place Market was the Gum Wall. There is an alley where people stick their chewed gum to this wall. It is disgusting! All colors of old bubble gum cover the wall. Some pieces appear to have oozed from one of the window sills. The whole place smells like bubble gum. Normally that is not a bad smell but knowing it is old discarded gum adds a gross-out factor to the experience. Traci talked me into posing for a picture in front of the wall. I did not want to get too close to it. I came back with a souvenir. Yep. You guessed it - a piece of gum stuck to the bottom of my shoe. Yuck! 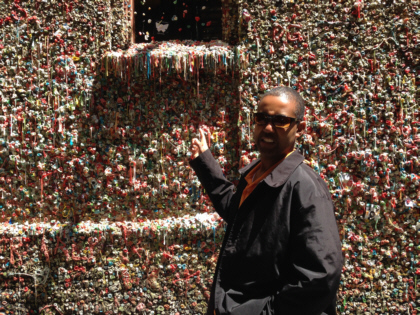 Our driver drove us along the waterfront and through historic Pioneer Square. Seattle impressed me as a rather artsy city. In addition to the sculpture park, there are abstract and modern art structures all over the downtown area. There is even a giant troll under one of the bridges. 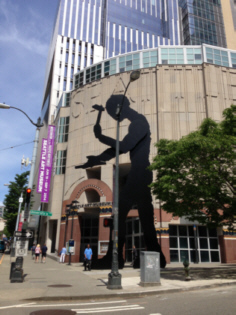 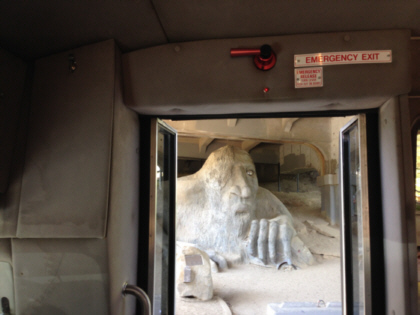 "Is there any room for a bridge troll on your tour bus?"

We made a stop at Ballard Locks to watch boats travel through the lock system. Salmon also migrate through this area and they were starting to return. Of course an opportunity to see wildlife was what had my attention at this stop. I saw fish coming through the water release system. There was also an underground observation area where visitors can look through windows beneath the surface of the water. We watched two adult salmon and a bunch of baby salmon swim back and forth. The real surprise came when I went up the stairs and started to head back to the bus. I happened to look over at the locks as a seal surfaced with one of the salmon it its mouth.

Our tour continued through neighborhoods. It was a bright, sunny day which meant there was a good chance that Mt. Rainier would be visible. Sure enough, it was; or as the locals say, "The Mountain was out". Its snow-capped dome seemed to levitate above the skyline. Our driver described it best when she said it looks like a scoop of vanilla ice cream. 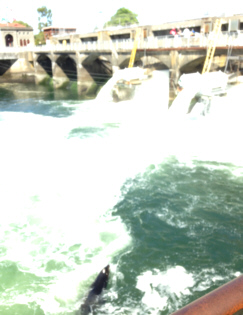 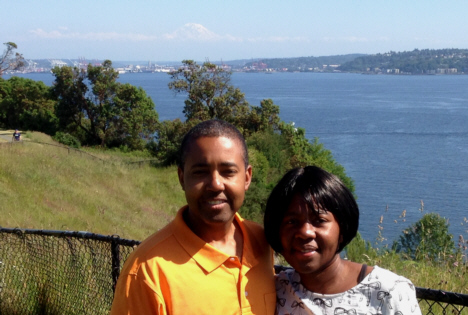 white dome of Mt. Rainier hovering in the background

Our driver dropped Traci and me off back at our hotel a little after 4 PM. She had done a wonderful job. We enjoyed our city tour.

Back at the hotel, Traci and I went through our daily ritual of trying to figure out what we had a taste for for dinner. Another nice thing about the Homewood Suites is that they offer a complimentary dinner buffet for its guests Monday through Thursday. Traci and I went downstairs to have a look at the buffet. It looked pretty good so we decided to skip going out and just have dinner at the hotel. It was Italian night so pasta, garlic bread, and salad was offered in addition to complimentary drinks that included soft drinks, wine (2-glass maximum), or beer (2-glass maximum). Cookies and fruit were available for dessert.

Traci and I chilled out in our room for the rest of the evening. This felt strange for us because we are used to cramming as much activity into our vacations as possible. Instead, we did a little social networking and watched TV. The unfortunate news of the day was another school shooting. This one occurred at Seattle Pacific University. Continue...