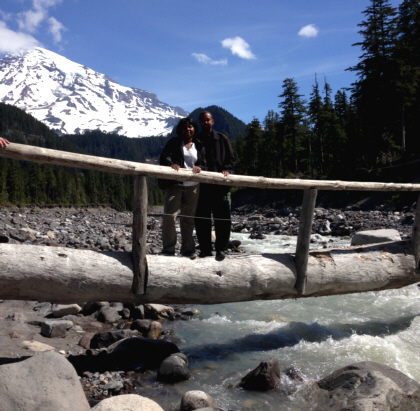 We needed to be up early Saturday morning. We had booked a 10-hour Mount Rainier Tour with Tours Northwest (same company we used for the City Tour two days ago). Even though we live in an age of email and internet bookings, I've learned to always call and confirm our bookings. I did this the night before. It was a good thing I did because our email confirmation indicated our pick-up time would be 7:30 AM. When I called to confirm this, I was told we would be picked up at 7:10 AM. I was able to take care of some other business with this phone call. Since Traci and I would be changing from our downtown hotel to an airport hotel on that day, I wanted to know if Tours Northwest could drop us off at the airport hotel at the conclusion of the tour. After verifying our scheduled tour bus would have room for our luggage, Tours Northwest said they could drop us off at the airport hotel. I was told there would be $15 per person charge for this but no one ever charged us.

Knowing that we had to be checked out of the Homewood Suites and waiting in the lobby by 7:10 AM, Traci and I were concerned that we would have no time for breakfast. We were under the impression that the hotel's breakfast buffet did not open until 7 AM. When we arrived at 7, we saw that other guests were already eating. We were kicking ourselves that we did not come down sooner because just as I was taking my first scoop of cereal at 7:05 AM, I saw the Tours Northwest shuttle pull up in front of the hotel. I put my spoon down and went out to meet the driver. I figured Traci could continue eating while the driver and I put our two suitcases in the back of the shuttle. I tried to delay a little more by telling the driver I would run inside and tell Traci we were ready, but before I could take off, he pointed to the window and asked "Is that your wife?" I looked up and saw Traci gobbling down a sausage patty as fast as she could. The driver motioned to her to come along.

We made stops at a couple of other downtown hotels to pick up passengers and then were driven out to the airport area where our driver picked up more passenger from a hotel and from another Tours Northwest shuttle that had been scooping passengers at nearby hotels. With all the pick-ups done, we were finally on our way to Mount Rainier National Park. Our driver made a stop at a Safeway grocery store so that everyone could get breakfast if they desired. Traci and I got bagels and donuts.

Our driver gave commentary about Seattle, Mount Rainier, and the Pacific Northwest in general as he made the 1.5-hour drive to the park. His commentary continued as we rode through the park. Mount Rainier National Park is beautiful. There are rushing rivers, waterfalls, meadows, extremely tall evergreen trees, and, of course, Mount Rainier. We made numerous stops at scenic view points for pictures and very short trail walks. 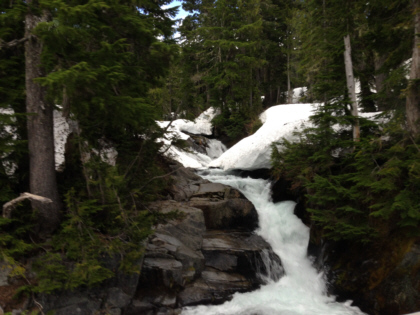 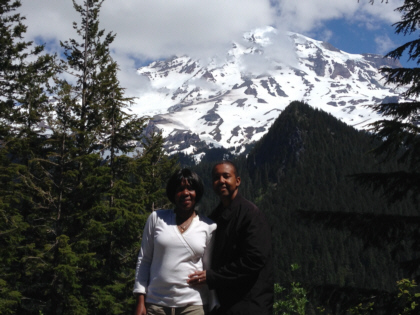 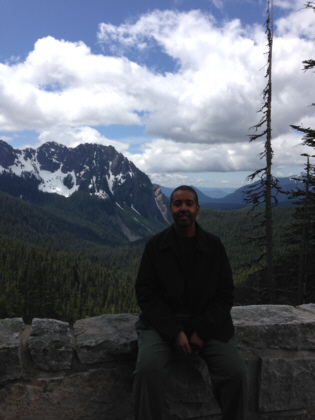 At 14,410 feet tall, Mount Rainier stands prominently above the rest of the mountains in the Cascade Mountain range. She is clearly visible from Seattle which is 65 miles away but what really blew my mind was the moment I remembered our tour guide at the wind farm in Vantage earlier in the week pointing out Mount Rainier. The white-capped dome was clearly visible even though we were over 120 miles away at the time! Mt. Rainier is actually an active volcano. I was told 'active' means there is a good chance it will erupt sometime within the next 1,000 years.

Now that we were in the park and much closer, the mountain dominated the scenery. At one of our photo stops, our guide loaned us his binoculars so that we could see mountain climbers making their way towards the summit. Even through the binoculars, they looked like moving 'periods' on the snow-covered ridges. Climbing Mount Rainier is nothing to take lightly. In the news during our time in Washington was that of the six climbers who perished on the mountain the previous week.

We continued making photo stops until we made it to the Paradise Visitor Center which sits at 5,400 feet. There was still a lot of snow cover at this elevation even though it was a warm sunny June day. Our tour group consisted of people from all over the world. It was fun to watch the people from warm climates enjoy the snow. 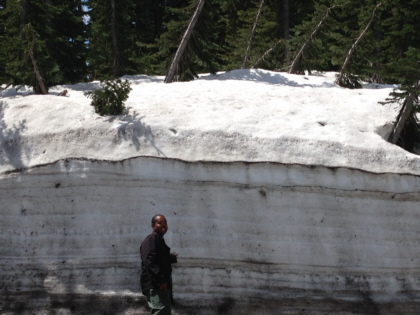 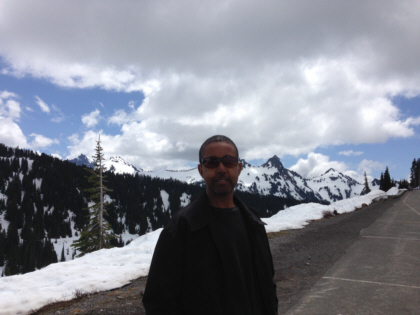 We were given 1.5 hours at Paradise. There are restaurants, a hotel, souvenir shops, and a small museum. Traci and I watched a film about Mount Rainier and walked through the museum that contained geology, ecosystem, and Rainier history exhibits. We checked out the souvenir shops. Traci bought a t-shirt and I bought candy.

Paradise was the turnaround point for the tour. Our guide drove the winding roads to exit the park and then headed back towards Seattle. We all felt sorry for a lady on our bus who realized about an hour into our return trip that she might have left her iPad on a stump in the park. I am not sure what type of arrangements were made for her to retrieve it but it certainly was not going to happen on this trip.

Our driver met another Tours Northwest shuttle at a McDonalds on the outskirts of the city so that they could organize passengers based on their hotel destinations. Traci and I had to move to the other shuttle with the people who were going to hotels near the airport. The driver for this shuttle was a very pleasant guy. He was still in tour guide mode as he made his rounds to the various hotels. He seemed to have stats and facts about every street and building. Traci and I were his last drop-off of the group. The Mount Rainier tour was nice but in hindsight, we should have rented a car for the day and done the tour ourselves. The stops at scenic view points and visitor centers were the same that other visitors to the park make without an organized tour.

With the tour behind us, Traci and I checked into our fourth and final hotel of our vacation. This time we were at the Fairfield Inn Seattle SeaTac Airport hotel. The young lady who checked us in was so welcoming and enthusiastic. The hotel had all our booking requirements plus more. Their complimentary shuttle service not only takes you to/from the airport but it will also take you to/from the local restaurants within a mile of the hotel. We must have looked hungry when we checked in because the receptionist immediately gave us a list of nearby restaurants and gave us her opinion of many of them. We took the list to the room to look up the menus on Traci's iPad.

Our room was nice and clean. A sink outside the bathroom is not our preferred room style but 2 of the 4 hotels at which we stayed during our trip had this same set up. The only weird thing about our room was the toilet with the extremely powerful flush. It was even more powerful than those cruise ship toilets.

Traci and I took the shuttle to a restaurant called 13 Coins. It is a 24-hour place and thus I was expecting to walk into a diner-like restaurant. To my surprise, the place looks upscale. However, the prices were very reasonable. There were many choices on the menu. This dinner turned out to be our second favorite meal of the week - second only to the meal we had in Leavenworth.

Thanks to Traci's after-dinner cupcake craving, we ended up walking back to the hotel. In the process of doing this, we must have read the dessert menu of every restaurant in the area. She was not able to find a cupcake or even a slice of cake. Most of the places we visited offered pies, cobblers, custards, and ice cream.

We spent the rest of the evening relaxing at the hotel. The next day, we took the hotel shuttle to the airport. We bought a cool refrigerator magnet for our collection. It summarized our trip nicely. We had a direct flight from Seattle to Dulles. I slept most of the way. Our Washington state trip was a wonderful experience. Main Page