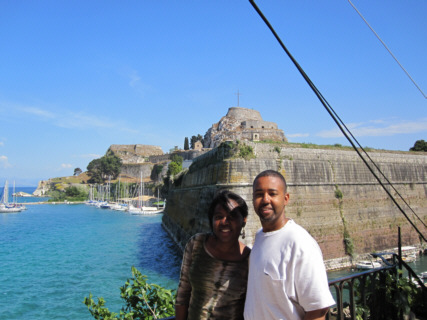 I know this sounds cliché but each morning when I stepped onto our veranda, I had to pinch myself to be convinced this dream vacation was now reality! I was gazing upon the Greek isle of Corfu. Across the water was the Greek mainland and the mountains of Albania. Greece was our only port of call at which we needed to adjust our clocks since its time zone was an hour ahead of the other ports we visited that week.

Our shore excursion for the day was Paleokastritsa, Lakones & Wine. As we were being driven to our first stop on this damp, chilly morning, our guide explained that Corfu's economy is totally based on tourism. Their tourist season runs from March to November. During the off-season, the residents of the island scrape by with their high season earnings. I imagine they were in for tough times in the coming year. Greece was having major financial problems during the time of our visit. The EU (European Union) was drafting what was the equivalent of a trillion dollar bailout of the bankrupt nation.

We arrived at our first stop, Paleokastritsa. We were at a small beach with a handful of souvenir shops. We were told about the 13th century monastery at the top of the hill and then given some time to look around. Audie stayed on the bus at this stop to catch up on some sleep while the rest of us did some sightseeing. We met a very friendly shopkeeper who complimented us in broken English on how nice we were after we bought a magnet and postcard from her shop. She even gave Sugar a big hug.

We were told it was a ten-minute walk up the winding street to the monastery. I was wondering why the bus did not drive us up there. I saw other tour buses ascending and descending the hill. Anyway, Sugar, Traci, and I set off on foot to the top. It turned out to be an interesting walk. As we began our trek, we saw a goat herder herding his goats in the field below. Sugar, who is not an animal-lover, became nervous about the situation. No sooner than I finished assuring her that the goats were not headed in our direction, they made a U-turn, climbed the hill, and were now on the street heading towards us as the sound of the bells around their necks was clanging louder. Oh no! The three of us backed up and stood there as the goats trotted past us.

Just as we resumed our walk, we froze again when we saw two dogs trotting towards us. I shooed the first one away and he ran up the path towards the goats as did the second. Before we reached our destination, we would encounter a lone donkey, some cats, and even some roosters crowing. We could have written a nursery rhyme about the 'road to the monastery'. 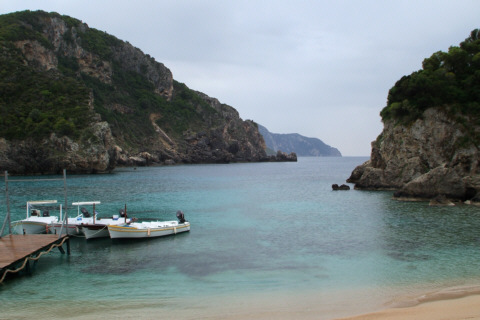 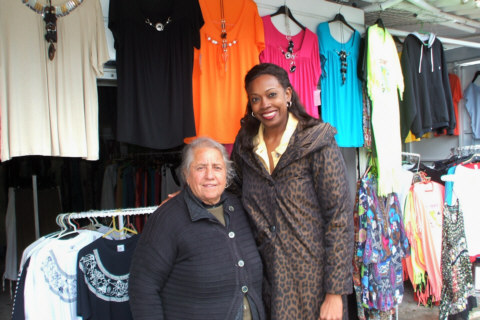 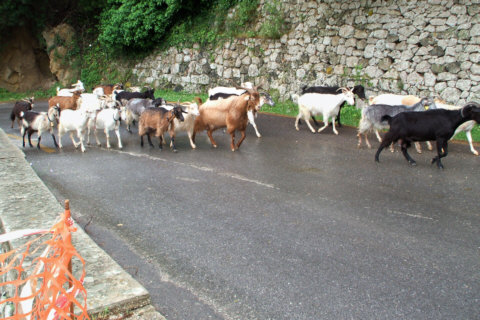 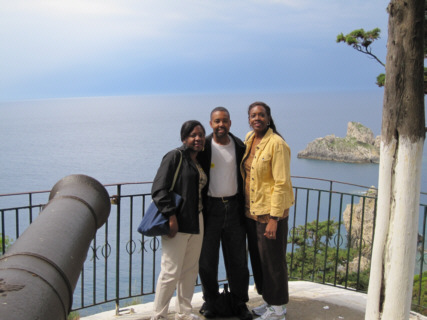 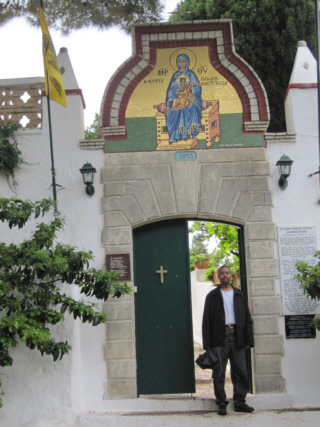 entrance to the 13th century monastery

We did not have time to enter the monastery because we needed to make it back to the bus within the next 20 minutes. Instead, we admired the scenic overlook of the blue Paleokastritsa bay before heading back down to the bus.

Our bus driver stopped at another scenic overlook while we were making our way higher into the mountains. The road was full of switchbacks and terrifying steep edges. The island is known for its multitudes of olive trees. We saw many during our ride. The people place nets under the trees to harvest the olives. We passed through small towns. The road through some of them was so narrow that the bus could barely squeeze through without scraping a building on either side. 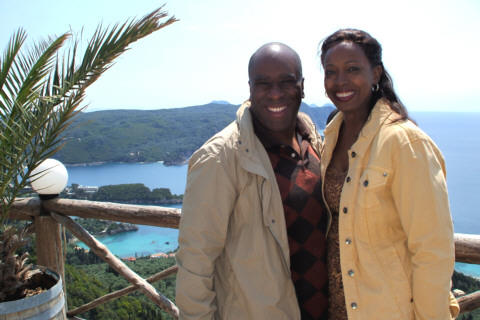 Audie and Sugar at a scenic overlook

We finally reached the village of Makrades where we had our meze (traditional local Greek snack). We were led into the Kolombos Taverna restaurant where we were offered ouzo (national alcoholic drink of Greece), a local red wine, and a meze meal. Inside the restaurant was an olive press and other old farm equipment on display. Our group was seated at the outside terrace. Our plate contained olives, a slice of tomato, a slice of cucumber, a slice of salami, feta cheese, bread, and rice wrapped in grape leaves. I'm such a picky eater that the only thing I found appetizing was the bread but Sugar, Audie, and Traci enjoyed their meals. 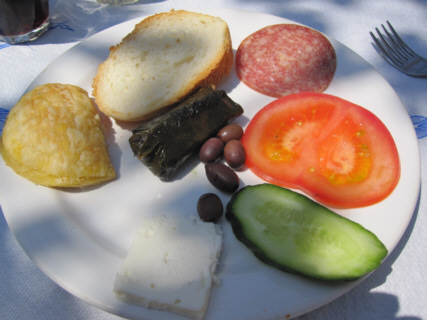 After finishing lunch, we still had almost an hour before we needed to be back on the bus. There were about five souvenir shops in this small town that were all pretty much selling the same items - sponges and olive products. We took a quick glance and then waited on the restaurant terrace until it was time to board the bus again. While we were waiting, Sugar shared some of the delicious baklava she bought from the restaurant.

Our tour ended back at the port where our ship and other cruise ships were docked. Although we saw some nice views, this shore excursion was only so-so for me mainly because the excursions we did at other ports were so much better.

Sugar and Audie went back to the ship while Traci and I took the complimentary shuttle to Corfu Town to do more sightseeing. We set out to explore the streets surrounding the main square of Esplanade. As was the case with other ports we visited during this cruise, we were once again in the tourist district when many of the stores were closed for siesta. Traci and I still walked around the area for a while and enjoyed the warm sunshine. The Old Fort was quite an imposing structure to look at. Its construction was begun by the Venetians in the 6th century. We did not pay to enter since our time was limited. We resolved to taking a few pictures and then boarding the complimentary shuttle back to the ship. 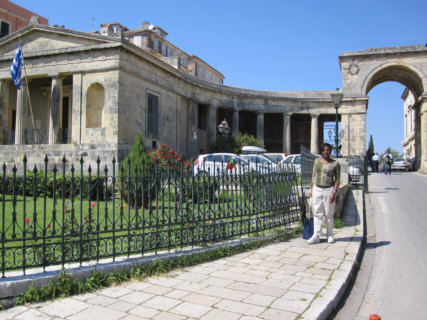 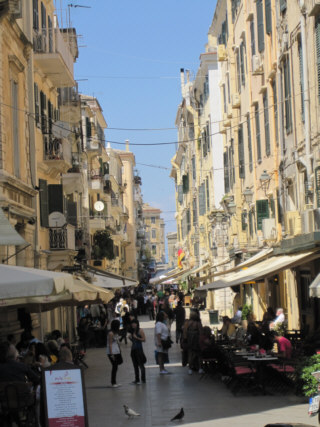