We had a nice room that looked more like the chain hotel rooms that we are used to in the U.S.. The only differences were that this room had dark hardwood flooring instead of carpet. There was no television. This was our only hotel stay in Tanzania that did not have a mosquito net.

Since the lodge was situated on a hill, we had a nice view of the plains below. We often saw Cape buffalo from our window. That first evening, I heard lions roaring! It is no wonder the hotel had a sign in the lobby warning guests not to roam off of the hotel property.

The grounds of the hotel were marvelous. It was surrounded by trees and large boulders to blend in with nature. Monkeys could be seen and heard playing in the trees. Hyraxes (look like guinea pigs) went about their business foraging in the driveway, parking lots, and pathways of the property. The lodge amenities included an outdoor pool, fitness room, and business center. Wi-Fi was available for a fee but Traci and I did not purchase it. Those from our group who did said that it was slow and unreliable.

Electricity at the lodge was available 5:30 AM - 9:30 AM and 6 PM - midnight. This meant I had to keep my headlamp nearby in case I needed to use the bathroom in the middle of the night. The place is pitch black when there is no electricity at night. 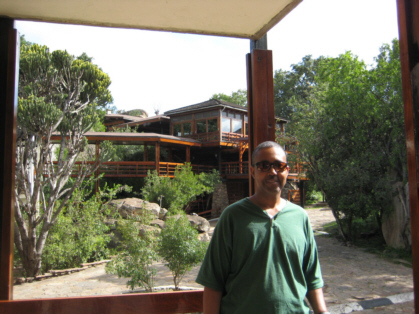 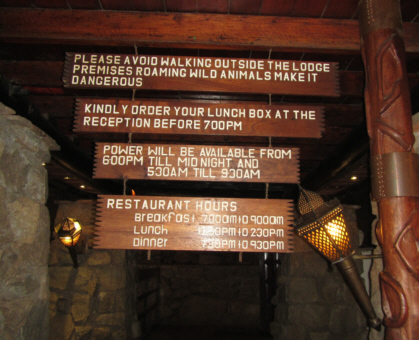 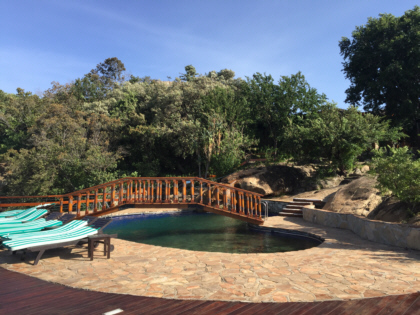 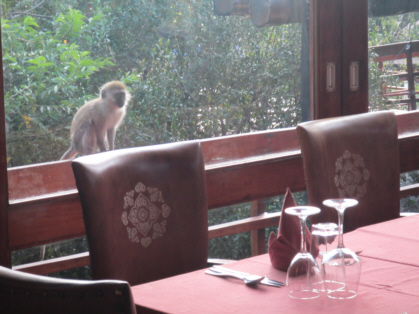 Our group met for dinner in the large two-story dining room. Since it was not quite high season yet, there were not many other guests. I was impressed with the food at Lobo. It was buffet style and had a variety of choices. There were meats such as chicken, lamb, beef, and ribs. There were vegetables, rice, soup, breads, and potatoes. There was a cook-to-order pasta station. There was Indian cuisine. There were even pastry desserts. Up until now, desserts in Tanzania normally consisted of fruit.

The next morning, we met in the dining room for a nice breakfast buffet before we were supposed to board our safari vehicles for our morning game drive. Traci joined us for breakfast but decided not to do the game drive that morning. She needed a break from the dust, the flies, and looking at wildebeests.

We saw an abundance of animals during our 4-hour game drive. The animal sightings on the Serengeti were much closer than any of the other parks we visited. We saw hundreds of wildebeests and zebras. It was nearing the end of the great migration in which over a million zebra and wildebeests migrate from the Serengeti in Tanzania north to the Maasai Mara in Kenya. Huge herds of them were everywhere we looked. The wildebeests made their throaty "eww" grunts and sniffs. The zebras could occasionally be heard making their distinctive "wup-wup, wup-wup" calls.

We saw lions, elephants, giraffes, monkeys, and buffalo. We saw antelopes ranging in size from the tiny 2-foot tall dik-dik to the large topi. We saw a variety of birds: vultures, hawks, secretary birds, eagles, hornbills, ostriches, and more. What was amazing to me was that Serengeti National Park is almost twice the size of the state of New Jersey yet we were seeing a high concentration of animals in the small area in which we were riding. I would have thought we would be driving long distances to spot animals.

We spent quite a bit of time riding around looking for a leopard or cheetah. A highly coveted safari experience is to see Africa's Big 5: elephant, buffalo, lion, rhino, and leopard. During our 5-day safari, we saw all of them except the leopard.

We arrived back at the lodge around 1 PM. Traci filled me in on her eventful morning at the hotel. She said she spent some time relaxing by the pool and talking to some of the other tourists that were there. She said that after the tourists left, a troop of baboons showed up. They began throwing the seat cushions around and playing in the pool. Traci said she made a hasty retreat back to our room.

Traci joined us on the evening game drive which was from 4 PM to 7 PM. We saw more of the same animals. The highlight for me was watching the sunset over the savannah and looking in the opposite direction to see a large full moon rising. 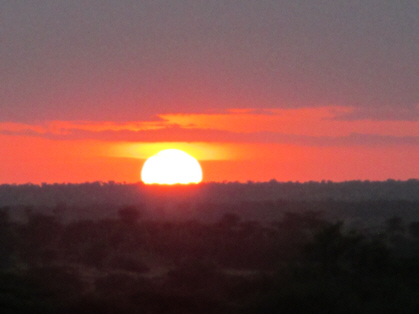 sun setting on the Serengeti 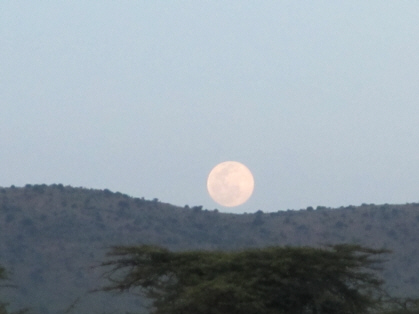 moon rising over the Serengeti

The next morning, we began our long, dusty ride out of Serengeti National Park. We paused to see some animals we hadn't seen close up such as hyenas and a serval cat. We made a lunch stop in the park near a hippo pool. We were able to walk over and look down at the large animals crowded together in stream. They were quite vocal at times. 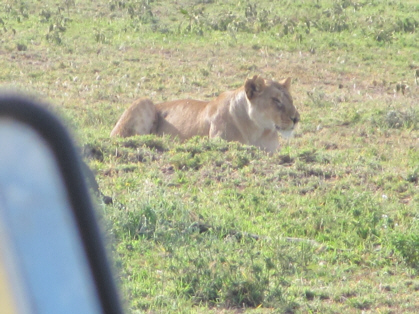 The lioness has her eye on a group of wildebeests. 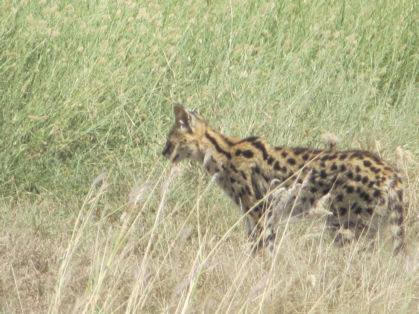 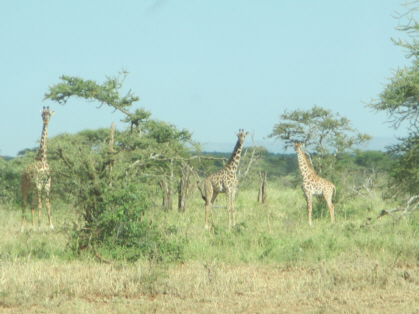 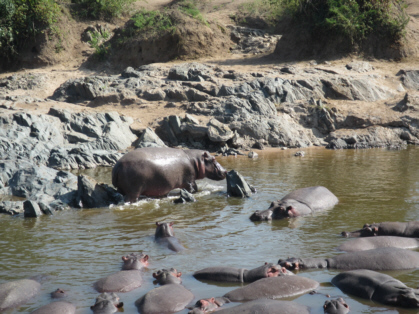 On we continued for a few more hours through the savannah. Oddly enough, our travel companions noticed that whenever we were being bounced around on the rough roads, it seemed that I would fall asleep. They were amazed that I could sleep through such a bumpy ride. I had not noticed this trend but sure enough, as soon as we exited the park and returned to a paved road, I was wide awake.

Almost 8 hours after leaving Lobo Wildlife Lodge, we reached our lodging for the evening – the Crater Rim View Inn again. The friendly hotel staff was happy to see us. In addition to providing us with warm, damp wash cloths and watermelon juice again, they used towels to beat the dust off of our luggage. With each strike, a cloud of dust would rise. I felt filthy.

The staff handed out our keys to the same rooms we had when we stayed there three nights ago. I was surprised that they remembered – especially since I never saw anyone write down room numbers for the 10 of us or have us fill out any forms the last time we were there. After a nice dinner, a good night’s rest, and a nice breakfast, we were on the move again shortly after 9 AM. We traveled on the mountain roads that overlooked lush green valleys. We frequently saw people along the road as we traveled. Some were walking with things balanced effortlessly on their head. Others were herding livestock. Some people were riding or pushing a bicycle.

We made a stop at a scenic lookout to get another view of Ngorongoro Crater. A funny thing happened when we stopped at the checkpoint to leave the Ngorongoro area. One of the other safari drivers left his window down when he exited his land rover to take care of administrative work. A baboon came along and jumped through the open window, much to the horror of the tourists inside. A few seconds later, the baboon hopped out of the open window with what looked like a candy bar. At that point, I saw not only the people in that land rover roll up the windows but people in every other parked vehicle in the area did the same thing.

We made stops at two souvenir shops - one of which was the same one we visited on the first day of the safari. We had our final box lunch there. This one was prepared by the Crater Rim View Inn. We also made a stop at a grocery store in downtown Moshi where I bought a delicious bag of roasted chicken-flavored potato chips. Yum!

We arrived back at the Lutheran Uhuru Hotel close to 5 PM. We said goodbye to our two drivers and presented them with tips. The 10 of us tourists who did the 5-day safari agreed amongst ourselves that we would each pay a tip of $75 ($15/day).

The rest of the evening at the hotel was relatively quiet and low-key. We were not able to check email because the internet was down until the morning.

The next day, Traci and some of the others in our group went across the street to visit an orphanage. I did not go but Traci said that the orphanage appears to be very well run. They have been able to send some of the kids to college.

At 2:30PM, we were shuttled to the Kilimanjaro International Airport. Nelson, the hotel manager, rode with us to the airport to see us off. It was a two-hour flight to Addis Ababa, Ethiopia on a cool 787 Ethiopian Airlines jet. They could control the tint of the windows electronically (I think?) to make the cabin dark or light. As we were flying out of Tanzania, we got a great view of Mt. Kilimanjaro. It finally struck me just how high the mountain is. The summit towered above the sea of clouds. Ethiopia... 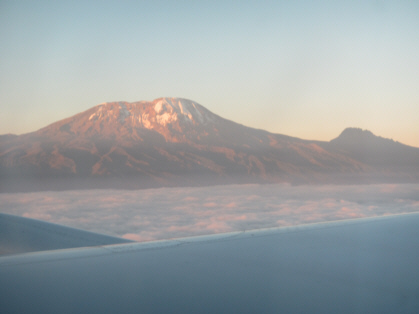 Mt. Kilimanjaro towers above the clouds 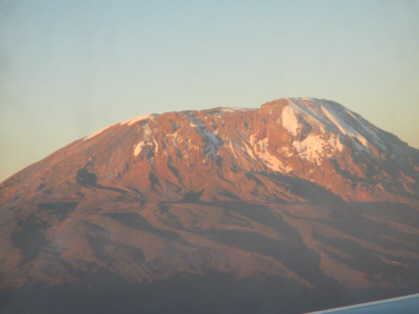 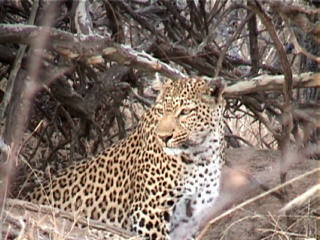