Rosebank - The Burbs of Jo'burg

Susan, Traci, and I landed in Johannesburg around 1 PM and were met by a Thompsons Africa representative holding a sign with our names on it. We were then shuttled to the Rosebank Hotel, our lodging for the Johannesburg leg of the trip. Jeffrey, Patricia, and Stephanie arrived on earlier flights so they were already waiting for us at the hotel. Before this trip, Traci and I had only communicated with Susan and Stephanie via email and teleconference, so it was nice to finally meet face-to-face.

The Rosebank Hotel is located in Rosebank, a suburb of Johannesburg. The rooms are neat and spacious. The bathroom had the biggest bath towels I have ever seen. Our "double bed", however, consisted of two twin beds pushed together. I found this to be the case at several of the hotels in which we stayed at during this trip.

The hotel amenities included a fitness center, an outdoor pool, a business center with Internet connection (approx. $4 for 30 minutes), souvenir shop, a lounge, and two restaurants. The large breakfast buffet in the main restaurant was included in our trip package. The food here was very good. 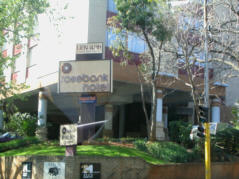 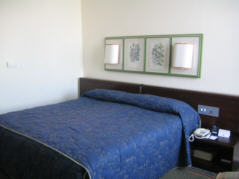 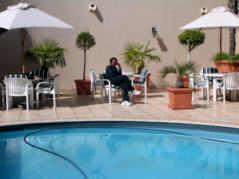 not warm enough to use the pool

The Rosebank Hotel also has an excellent upscale Chinese restaurant called Lien Wah. I know what you're thinking - Why come all the way South Africa to eat Chinese food? We laughed at the idea ourselves but I can tell you it was some of the best Chinese food I've ever tasted. They brought so much food to our table that we decided to create our own buffet. Everything I tried was delicious - especially the prawns. Our bill for all this good eating came to less than $12 per person.

Rosebank is a shopping and fashion district. In fact, there was actually some type of modeling agency meeting going on in the hotel which had the lobby filled with beautiful young women one morning. Each evening we walked to the Rosebank Mall which is about three blocks from the hotel. It looked liked any other mall you would visit here in the States. The only difference is that the stores close at 5 PM leaving only the restaurants and grocery store open for business. The first evening we stocked up on snacks and bottled water at the Pick'n Pay grocery store inside the mall. I love to walk down the snack aisle of grocery stores in other countries. I always find interesting chip flavors. This time, the potato chip flavors I tried were beef, chicken and thyme, lamb chops, and Thai sweet peppers.

The Rosebank Mall is part of a shopping district that spans several blocks. In addition to all the stores, there are a large variety of restaurants from which to choose. One of the ladies at the front desk of our hotel strongly suggested we eat at the Ocean Basket if we were interested in seafood.

The Ocean Basket is located in a plaza called The Zone @ Rosebank, which is adjacent to the mall. It was only a five-minute walk from our hotel. We chose the outdoor seating under the heat lamps. Several of the restaurants in this area offer this type of terrace seating. We had a very nice, attentive waiter. He was happy to meet us. Although, he's served tourists from all over the world, he told us we were the first Americans he'd ever met. I hope we represented our country well:).

The Ocean Basket has a chain of restaurants throughout southern Africa. Its menu has quite a few seafood choices on it: prawns, fishes, mussels, clams, etc.. Traci and I had difficulty choosing an entree so we decided to share the Princess Platter. It contained samples of several dishes.

The Ocean Basket serves food to its customers in the pan in which the food was cooked. There are plates on the table but you can eat right out of the pan if you want. Since Traci and I had the Princess Platter, our mountain of seafood and fries was served on a platter. All of us enjoyed our meal. Traci loved the kingklip fish and I couldn't seem to get enough of the big, sweet prawns. Our meals with soft drinks converted to about $15 per person.

I regret I never got a chance to thank the nice lady at the front desk of our hotel for recommending the Ocean Basket. It was a great choice for my seafood craving. 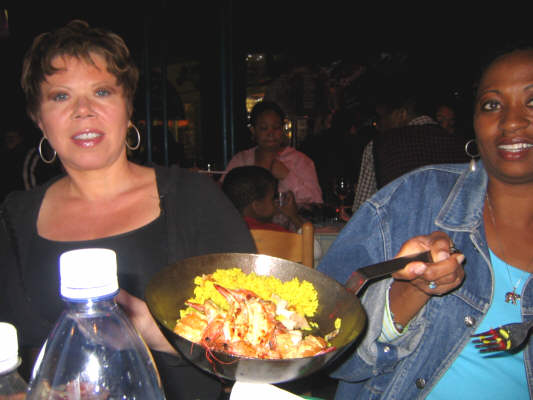 entrees served in the pan 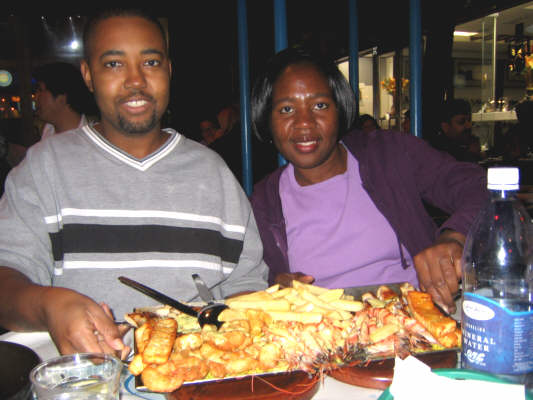 Traci and I shared the Princess Platter 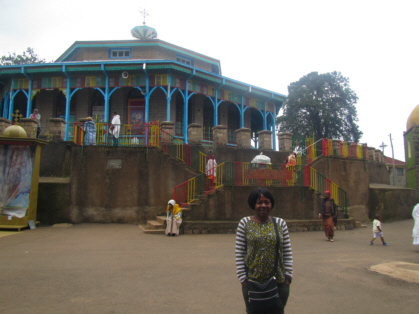 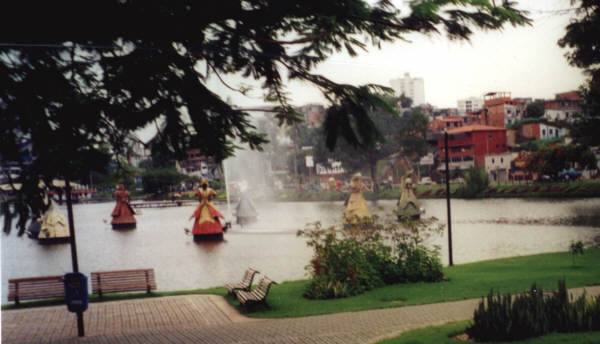