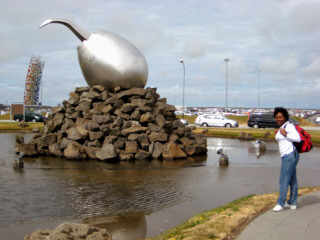 With the Greenland portion of our vacation behind us, we were now back in Iceland for an overnight before our flight back to New York. After all the small airports in Greenland, Keflavik Airport in Iceland seemed huge. We went through our normal routine of collecting our luggage and me trying to calm my internal anxiety of wondering if someone would be there to meet us. There was no customs to go through so before I knew it, we were at the ground transportation exit of the airport.

There was no one there holding a sign with our names on it. I didn't see any signs with the name of our hotel, Hotel Flughotel. My vacation documentation indicated there should be a complimentary hotel shuttle at the airport. I asked around and no one had heard of such. A gentleman at one of the tour desks offered to call the hotel on his cell phone but no one answered.

The currency exchange window at the airport had closed for the day but fortunately I found an ATM. My first attempt to withdraw 3000 ISK (3000 Icelandic Kroner approximately equaled $36) failed. I thought maybe there was some type of minimum so I tried withdrawing 5000 ISK when presented with the option to try again. It worked - kind of. I would have to contact my bank when I got home because my account showed the first 3000 ISK transaction succeeded even though I never received the money.

Relieved to have local currency in my wallet, Traci and I walked out of the airport and took a taxi to Hotel Flughotel. The cost of this 5-minute ride converted to approximately $20. We never did uncover the mystery of the complimentary shuttle. One of the hotel receptionists told us there is a noon shuttle to transfer people from the hotel to the airport but it wasn't free. Another receptionist told us she had never heard of a shuttle in the 5 years she's been there. I sent an email about the mystery shuttle to our travel agent when I returned home so that she could alert her other clients. She apologized for the confusion and refunded our cab fare. I thought that was a nice gesture. I was totally pleased with Borton Overseas from start to finish of this vacation.

Our room at Hotel Flughotel was neat and rather spacious. It was simple and pleasant. It had hardwood floors and white walls. The bathroom floor and walls seemed to be made of all the same plastic material. 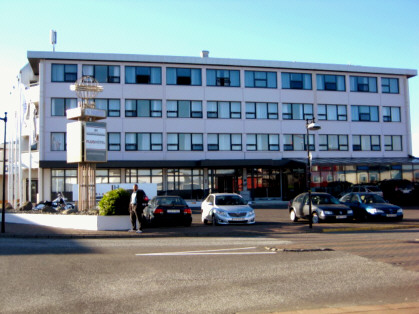 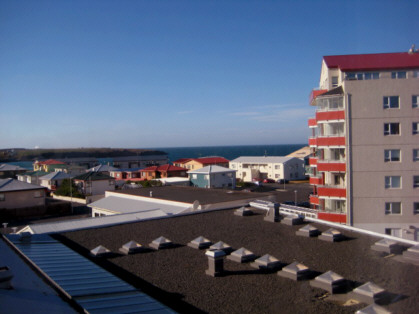 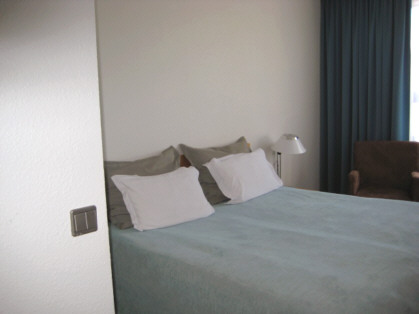 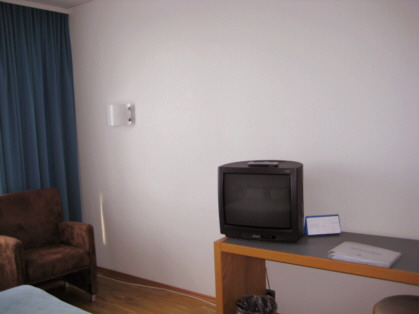 The hotel is located in the quaint town of Keflavik. There is nothing for tourists in walking distance. There is a residential area and a few commercial businesses. The famous Blue Lagoon is a 15-minute drive and the capital city of Reykjavik is a 45-minute drive away. We had a great time at both these locations when we visited Iceland in 2003. This time we wanted to see a different area of the country.

We took a stroll across the street trying to decide what we wanted to eat that evening. I was amazed that the Iceland drivers stop for pedestrians as soon as they step into the crosswalks. There is a pizzeria and a sit-down restaurant called Primo across the street from the hotel. In the end, we decided to eat at the hotel - monk fish for Traci and salmon for me. Both dishes were very good.

After breakfast the next morning, we walked a few blocks down to the harbor. It is a working harbor and not developed for tourism. We continued to walk and realized that if we had walked a few blocks beyond the Primo Restaurant the day before, we would have come across KFC and Domino's Pizza.

We caught a taxi to the airport in preparation for our 5 PM flight back to New York. We ended up spending an hour longer at the airport because I had accidentally set my watch an hour ahead of Iceland time. Our flight back to New York went smoothly; and thus, ended my dream vacation to Greenland. Driving back home to Pennsylvania from JFK Airport that evening, I realized it was the first time in a week and a half that I had seen a dark nighttime sky.

Vacation was over. In addition to the postcards, refrigerator magnets, and 478 digit pictures, we brought back great memories of the scenery, the people, and the culture. Unfortunately, Traci brought back something she could have done without - chickenpox! Knowing that it takes approximately two weeks from the initial contact to see symptoms, we guessed she picked it up on the flight to Nuuk with the summer camp children. We'll never know for sure. Main Page...